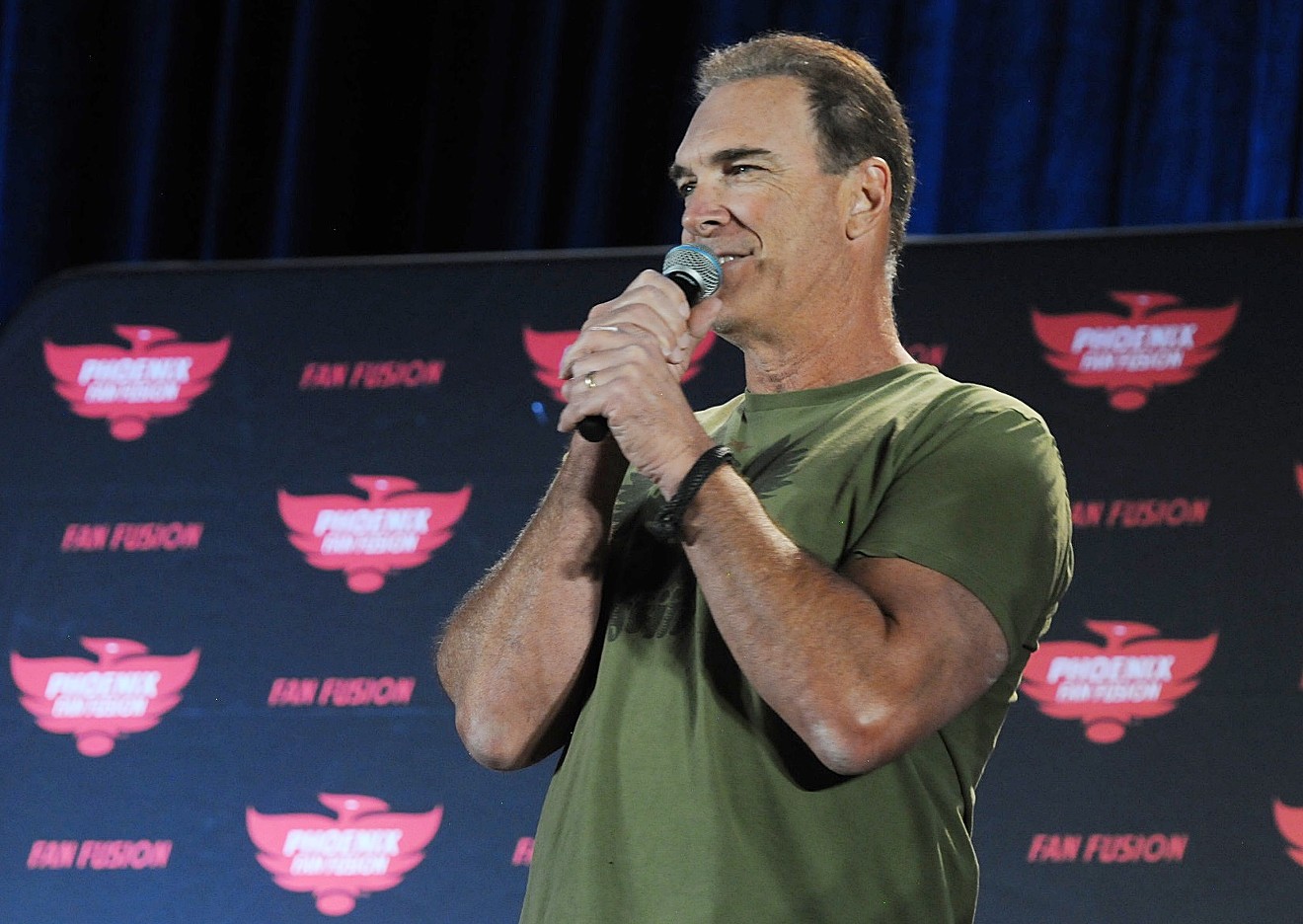 Actor Patrick Warburton greets the crowd at his Phoenix Fan Fusion panel on Saturday, May 28. Benjamin Leatherman
Actor Patrick Warburton tends to play the same character. Whether it's Kronk from The Emperor's New Groove, Brock Samson from The Venture Brothers, or Joe Swanson from Family Guy, Warburton is often recognized as a "silly guy with that really deep voice." (His run as The Tick from the '90s TV series is a minor exception, but mostly 'cause of the giant blue suit he wore.) Heck, it's a fact that he's both aware of and more than willing to own up to entirely.

"I’m not a chameleon," he said during his Phoenix Fan Fusion panel on May 28. "Billy West can do all these amazing things. But people know it’s me. I’m limited by the range. I can, however, do a little John Wayne and a Brad Garrett."

Still, Warburton's not some one-note talent — as he's proven in sitcoms like Less Than Perfect; video games like Tales from the Borderlands; and perhaps his other most notable role, Puddy from Seinfeld. Warburton used the bulk of his hourlong panel to demonstrate his true depth, talking about his various roles, his personal life, and how to make it in the business. Equal parts charming and funny, the whole talk proved that Warburton's not just another Joe or David.

But he’ll happily accept any typecasting if an offer is on the table.

There's something about Kronk, the slightly oafish henchmen with a heart of gold from the Disney animated film The Emperor's New Groove, that has continually resonated with fans young and old. And the way Warburton talks about the character, it's clear that he's had a huge effect on his life and approach as an actor.

"I love what I do, and I’m very blessed," Warburton said. "I grew up with very strict parents; I could only watch Little House on the Prairie. So it’s great to do this, and I want to do things the right way. Doing Kronk, I learned there is no right way to do this. You have to make it up. People don’t know what it is until you do it. He was a henchman and he liked to cook, so I made him kind of sweet."

Another Valuable Lesson, However, Came Years Before

"The first two films I did, I was 22 and they were unwatchable," Warburton said. "I filmed them out in South Africa ... I asked the director, 'Should I work on a dialogue?' And he said no, so I knew it was bad from the beginning. But I didn’t care because I was getting to work."
click to enlarge 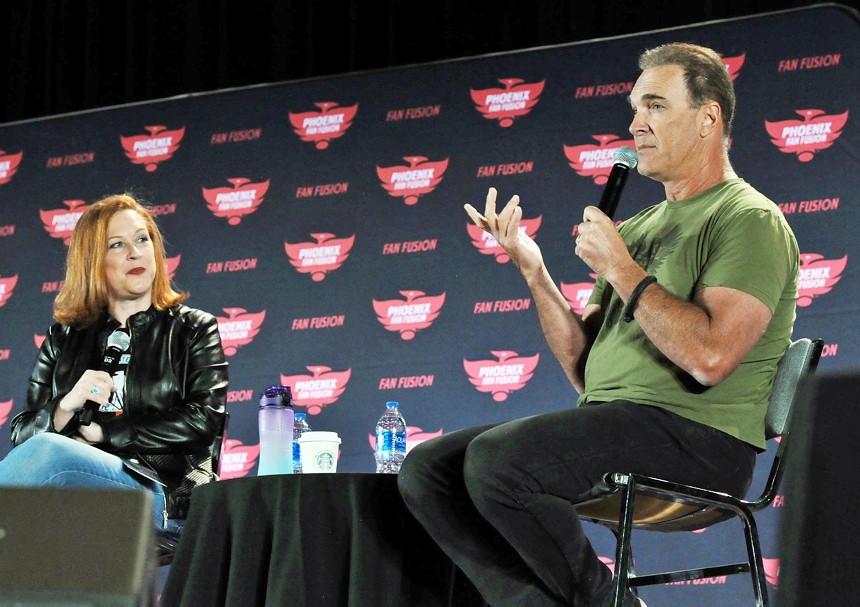 Actor Patrick Warburton (right) during his panel at Phoenix Fan Fusion on Saturday, May 28.
Benjamin Leatherman

Good Voice Acting Is About Vulnerability

It's those same lessons that Warburton gives any time he's asked by young voice actors how they can break into the industry. The key, he said, is a sense of openness and spontaneity.

"Always remember it’s a creative thing," he said. "There's always rules for this and to do that, and it's always a process. Directors often don’t tell you how to act, and they just might do fine-tuning. They want to see what you bring. Be creative. Do it some way no one else would. They want someone to take the character and bring it to life. To see something they haven’t thought of yet. Take that bull by the horns. You walk out of that room and you know you were true to yourself and original."

"They asked me to play Buzz Lightyear in [the animated show] Buzz Lightyear of Star Command," Warburton says of the space hero made famous by Tim Allen in the Toy Story films. "I knew dang well what that meant. I grew up watching Saturday morning cartoons. I knew it was going to be a cheap TV version and I didn’t care."

And speaking of Allen, Buzz Lightyear isn't the only time their careers have crossed paths.

"I did a movie with Tim Allen where I smacked the crud out of him in front of his 10-year-old [child]," Warburton said. "I told him, 'This must be your worst nightmare. I follow you to [the] set and smack the crud out of you.' Tim, I didn’t mean it to be this way."

Showbiz Is a Fickle Mistress

Warburton's attitudes are informed by a keen understanding of the business. While he's played some truly beloved characters, he knows nothing lasts forever.

"There will be many different Batmen and Supermen," he said. "And even The Tick."

If anything, he's banked on that impermanence to help his career. Like when he was hired for the second season of Dave's World, the early '90s CBS sitcom based on the life of humor columnist Dave Barry.

"Sitcoms on Friday nights don’t typically do well," Warburton said. "And that was keeping me from going back to Seinfeld. Fortunately, it got canceled and I was able to do Seinfeld."

You Can Never Have Too Much Fun in Life

Warburton clearly doesn't take himself too seriously as an actor. Because, despite his extensive CV, he's happy to poke a little fun at himself in the name of continued entertainment.


"I was at Disney one day with a friend and he says, 'He’s here every day; he really needs the attention," said Warburton, who has done work for Disney's theme parks in the past, including appearing in the "Soarin'" preshow. And it goes further still.

"I like to do stuff to embarrass my kids, too," he said. "I’ll go, 'Everyone be quiet. I really want to watch this guy!'" Warburton will also ride with his kids and scream, "I recommend the veal," and that gag once got a "waiter to shush me. If you work at Disney, you should have a sense of humor."

Or that time Warburton, who plays Lemony Snicket, got a tattoo in honor of season two of the Netflix adaptation of A Series of Unfortunate Events. That, and a sturdy reality check.

"I went 50 years of my life without a tattoo," he said. "I go get one ... and the tattoo artist didn't say anything for a real long time. Then he goes, 'I love you in those National Car Rental commercials.'"

His Parents Have Been a Massive Influence, for Better and Worse

Perhaps some of Warburton's perspective in life stems from life with his aforementioned "strict" parents, and the lessons he learned about life, humor, and the value of humility.

Or, how his parents felt about him playing the lovable-but-angry Joe Swanson on Family Guy.

"My parents have hated it since day one," he said of the role. "My father left me a message one time ... about how Family Guy is the ruination of America."

Even when Warburton was supporting his parents financially, they never came around.

"My mom still donated to all her causes," he said. "She'd donate to the Parents Television Council, and their No. 1 goal is to get Family Guy off the air. I'd say, 'Mom, I’m supporting you and putting your grandkids through college with Family Guy.' And she didn’t care."

Life and Art Are Often the Same Thing

Like so many other celebrity guests, Warburton had some truly random celebrity stories to share. Aside from the ones with Allen, the other involved his first "meeting" with Eartha Kitt circa 1985.

"She's sitting on a couch stroking a kitten," Warburton said. "She excuses the butler and it’s just me and her and it’s so awkward. Everything she said felt like a double entendre. But she didn’t make any inappropriate advances. I was like, 'You are way out of your league here.'

But then you jump to Emperor's New Groove, and it was art imitating life. It was almost like the two of us 15 years earlier, right there on the screen."
KEEP PHOENIX NEW TIMES FREE... Since we started Phoenix New Times, it has been defined as the free, independent voice of Phoenix, and we'd like to keep it that way. With local media under siege, it's more important than ever for us to rally support behind funding our local journalism. You can help by participating in our "I Support" program, allowing us to keep offering readers access to our incisive coverage of local news, food and culture with no paywalls.
Make a one-time donation today for as little as $1.
Chris Coplan has been a professional writer since the 2010s, having started his professional career at Consequence of Sound. Since then, he's also been published with TIME, Complex, and other outlets. He lives in Central Phoenix with his fiancee, a dumb but lovable dog, and two bossy cats.
Contact: Chris Coplan
Follow:
Twitter: @CCoplan