Artist Val Hunt gets sculptural with Pete Deise's work at Art d'Core 2017. Photo: Lynn Trimble
Sure, you probably have plans for St. Patrick's Day. But what about the other six days of the week? Check out the expanded edition of Art Detour, release your guilty conscience at Bar Flies, or sing along to Little Shop of Horrors. The choice is yours. For more things to do, see Phoenix New Times' calendar.

It’s a semi-swanky gathering of creative types and community members that’s hosted by Artlink at Warehouse215 at Bentley Projects, 215 East Grant Street. Creative cocktail attire is encouraged, and tickets are $20 to $30.

The event kicks off a five-day celebration of art in Phoenix that spotlights different areas, including Roosevelt Row, Grand Avenue, and the warehouse district, and includes various programming. Expect exhibitions and studio tours, capped off with a symposium on the intersection of art and architecture. 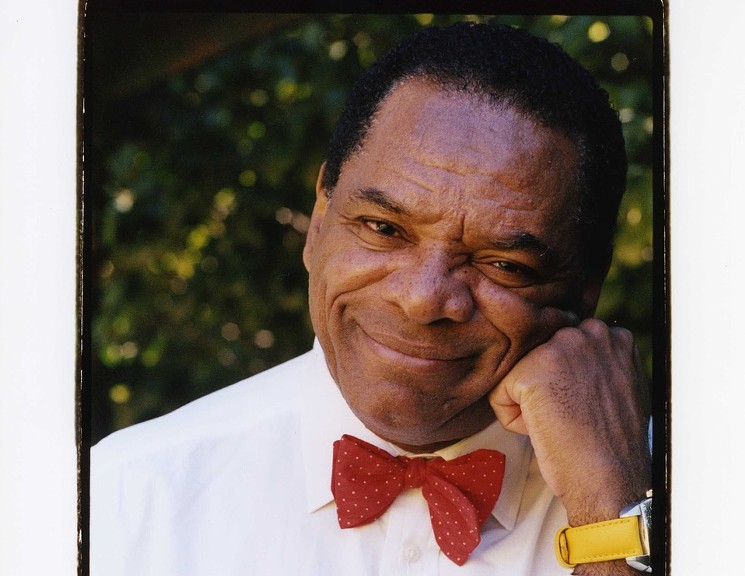 Meet the living legend.
Courtesy of John Witherspoon
John Witherspoon
You may have heard that John Witherspoon suffered a stroke on stage in January. But the actor and comedian, best known for portraying Ice Cube’s father in Friday and Pops on the sitcom The Wayans Brothers, issued a statement on Twitter explaining that he actually had a reaction to some cold medicine. Phew.

The living legend, who has worked with everyone from Richard Pryor to Eddie Murphy, is coming to Stand Up Live from March 15 through 17. As Witherspoon would say, “you got to coordinate” at 7 and 9:30 p.m. on Saturday at 50 West Jefferson Street. Admission is $25, and there’s a two-drink minimum. For more information, visit the Phoenix Standup Live website. Jason Keil

Bar Flies
Being labeled “guilty” could earn you some time in the Fourth Avenue Jail, the doghouse, or the therapist’s office. Hear how culpability runs the gamut at this month’s Bar Flies.

Hear their stories at 130 North Central Avenue. Admission for this 21-and-over event is $5 at Ticketfly. See details at the Valley Bar website. Lindsay Roberts

Once again: upside down, gentle smacking. If it sounds like birth, there’s a reason. Jensen’s free lecture commences at 7:30 p.m. in the Kiva Lecture Hall at 4701 West Thunderbird Road in Glendale. Visit the New College website. Julie Peterson

An empty apartment presents a blank slate in 6 RMS RIV VU.
Loozrboy (CC BY-SA 2.0)
6 RMS RIV VU
In Manhattan, finding a suitable apartment can be more challenging than finding a soulmate. (That’s why many of our favorite sitcom characters stalk the dying in hopes of scoring their digs.) The plot of 6 RMS RIV VU springs from a classified ad for a desirable rental property on Riverside Drive (six rooms, river view) that attracts Anne and Paul, who attract each other. They’re happily married to other people, so awkwardness ensues, especially when they’re accidentally locked in together for the night. The 1974 TV-movie version starred Carol Burnett and Alan Alda, leading millions of parents to assume it was wholesome enough for us to watch.

See how Passarello blends history, culture, myth, art, and science, when she reads from the book on the back patio at Piper Writers House, 450 East Tyler Mall in Tempe, on Friday, March 16. The free event runs from 7 to 8:30 p.m. and includes an informal Q&A and book signing. Visit the Piper Writers House website. Lynn Trimble 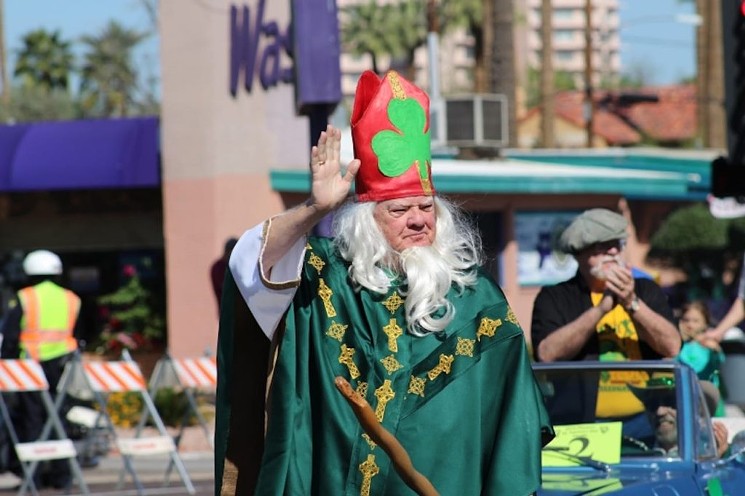 Loaded with decorative floats, the parade is a moving party featuring live music and dancers. Hit the park for the Faire, where the fun continues. Three stages will feature traditional music, step dancing, and bagpipe players. Food vendors will sell Irish fare. Irish clubs and a genealogy tent get you informed.

Drape yourself in green and party from 10 a.m. to 5 p.m. on March 17 at the Irish Cultural Center at Margaret T. Hance Park, 67 West Culver Street. Admission is $12 for adults, $10 for those 55 and older and military, and free for kids 12 and younger. Get in the VIP Pub for $20, which includes general admission. Visit the St. Patrick’s Day Phoenix website for more. Amy Young 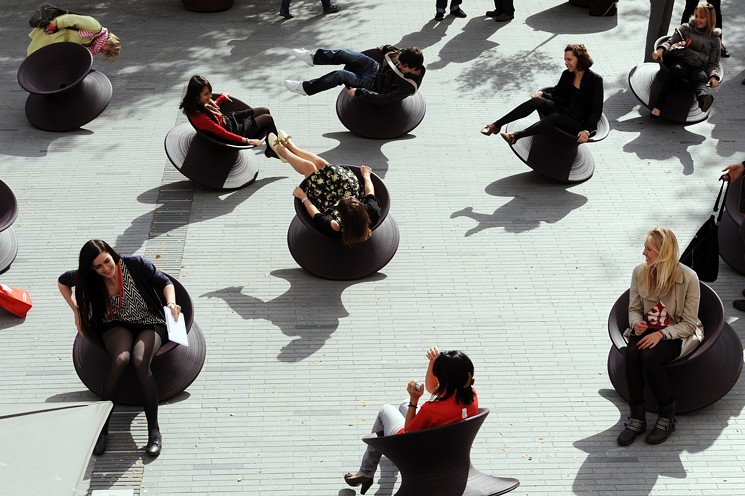 Check out the fun spinning chairs at the festival.
Courtesy of Mesa Arts Center
Spark! Mesa’s Festival of Creativity
Expect to bump into a lot of art car fans at the annual Spark! Mesa’s Festival of Creativity. The event will feature “Art Car World,” an exhibition of 16 such vehicles ranging from hot rods to lowriders, with names like Bohemian Rhapsody, Owl Car, and the California Fantasy Van. There will also be the community art car build and an interactive chalkboard car.

Jorge Pardo, Untitled, 2014. Seven hand-painted ceramic light fixtures, dimensions variable.
Courtesy of the artist and Ceramica Suro
“A Dream on a Dream: Encounter with Claudio Dicochea”
There’s no shortage of talking heads when it comes to immigration issues. But creatives bring new dimension to the debate, with art that prompts deeper consideration of shared humanity and cultural connections. That’s certainly the case at ASU Art Museum, 51 East 10th Street in Tempe, where you can see three new exhibitions during its Spring Opening from 6:30 to 8:30 p.m. on Friday, March 16.

“A Dream on a Dream: Encounter with Claudio Dicochea” explores what the American dream means today. “Bajo Presión/Under Pressure” reveals the powerful intersection of politics and art. And “Saber Acomodor” highlights the marriage of traditional techniques with contemporary ideas.

Broaden your concept of desert vegetation beyond cactuses and succulents: The sale includes herbs and vegetables, trees, flowers, and other green stuff with leaves. Baby plants, big plants, 30,000 freakin’ plants — and expert horticultural advice. Hours on Saturday, March 17, are from 7 a.m. to 5 p.m. at 1201 North Galvin Parkway. Call 480-481-8188 or visit the Desert Botanical Garden website for more info. Julie Peterson

Lauren Cusimano was the Phoenix New Times food editor from 2018 to 2021. Joys include eating wings, riding bikes, knowing everyone at the bar, talking too much about The Simpsons, and falling asleep while reading.
Peterson, Julie