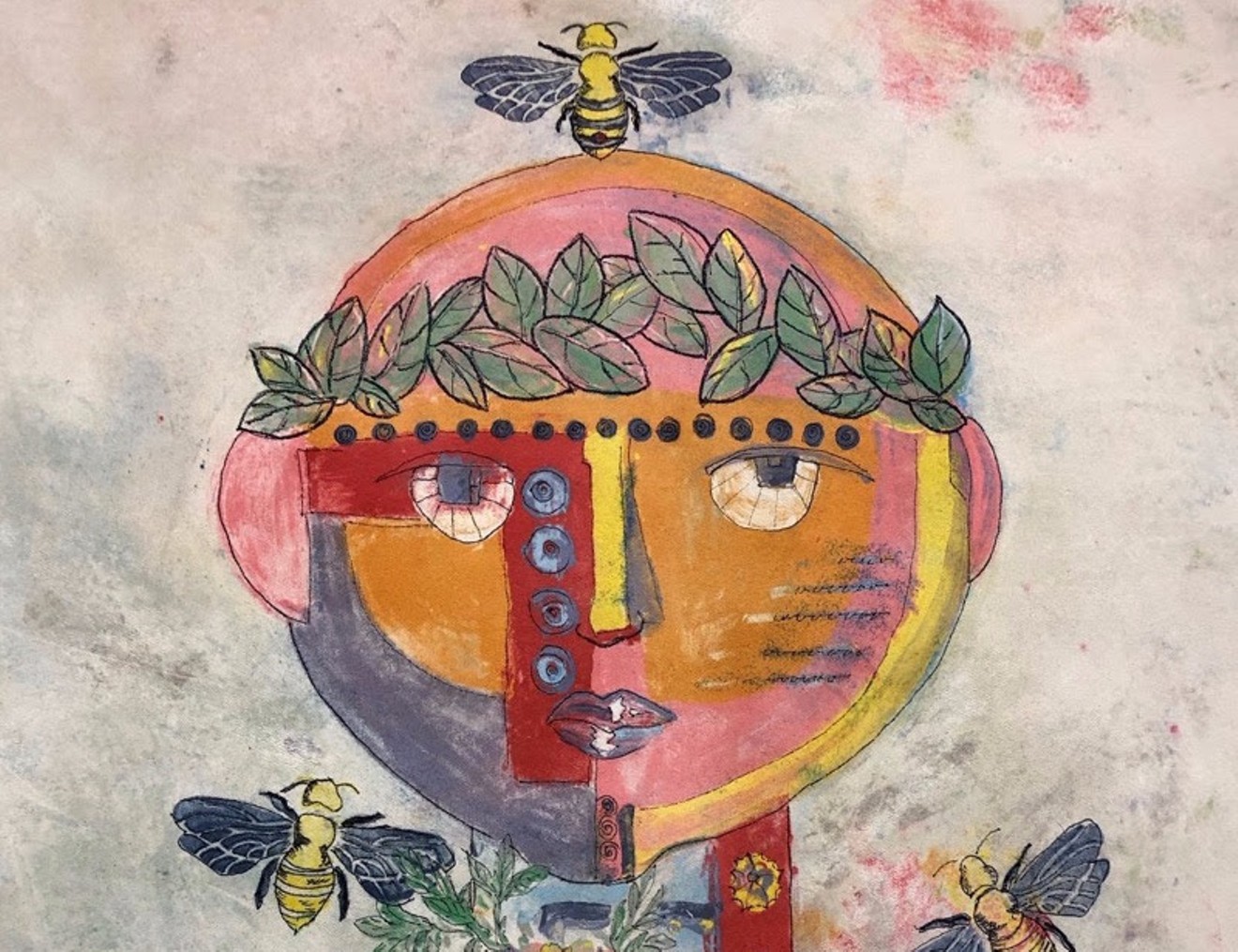 Padriac Murphy ran with the "Bugs and Blooms" theme. West Valley Arts HQ
New week, new plans. This week, you can beat the heat during Summer Spectacular Art Walk, spread the holiday cheer at Christmas in July, or sketch your heart out during Cider & Scribbles. For more things to do, visit New Times’ calendar.

Let’s start with a disclaimer: Mondo a Go-Go is not the amusement park opened by the beloved Cartoon Network characters Ed, Edd, and Eddy. It is a night of rhythm and blues hosted by DJ Shane Kennedy. The eroticism of French pop or the groovy sounds of world disco will be playing into the wee hours of the morning. Kennedy even digs deep into the mysterious genres of “skronky tonk” or “jazz noir.” Grab your favorite cocktail and settle in. Never fear when rainy days come calling and your desert garden gets soaked. Every problem is an opportunity, especially when it comes to growing plants. Tempe Public Library, 3500 South Rural Road, invited master gardener Emily Heller to give a free presentation called Monsoon Gardening from 6 to 7:30 p.m. on Wednesday, July 10. Heller grows edible flowers, and she’s an expert in growing vegetables, fruits, and herbs in the low desert using organic methods. She’ll share information about which plants can actually thrive amid monsoon rains and increased humidity, and give you tips for maximizing your garden by matching what you plant with the season at hand. Lynn Trimble

Then head over to Marshall Way north of Indian School Road, where you’ll see John Randall Nelson’s giant rabbit sculpture for Scottsdale Public Art. It’s also home to Wilde Meyer Gallery, which is having its “Annual $100 Show,” and the Art One gallery that has an eclectic selection of affordable offerings. Expect live music and refreshments, too. Lynn Trimble

Hugo Medina’s first show took place at Barrio Cafe in 2009. In the decade since, the Bolivian-born artist’s murals have transformed downtown Phoenix into a colorful feast for the eyes. Medina’s paintings, many of which reflect the struggles of migrants and the working class, along with images of his murals will be on display until the end of August at the Arizona Capitol Museum in an exhibition titled “Hugo Medina: 10 Year Retrospective.” You can meet the artist at the opening reception.

Gathering for Movies on Main in Mesa.
Ivan Martinez

Nearly five years after Robin Williams’ death, people still gather to watch the many films he made, including the 1995 film Jumanji, which imagines a giant, jungle-themed board game coming to life. Grab your lawn chair or blanket for a free screening happening at 8 p.m. on Friday, July 12, at The Sliver Lot, 219 West Main Street in Mesa.

National Comedy Theatre will be doing preshow activities, and the street will be lined with vendors and food trucks for the city’s 2nd Friday Night Out event. This month’s theme is Gamers’ Dilemma, so other offerings will include a vintage video game competition, plus an 8 p.m. trivia contest at the gallery at 101 West Main Street. Lynn Trimble

Meet several of the artists during the free opening reception from 6 to 8 p.m. on Friday, July 12. The exhibit, which continues through August 23, features works by more than three dozen creatives, including several inspired by desert blooms. Visit westvalleyarts.org. Lynn Trimble

With so many holidays happening near the end of the year, it’s nice to spread the holiday spirit around a bit. Give it a try in historic downtown Glendale, where Christmas in July is happening from 10 a.m. to 4 p.m. on Saturday, July 13. You don’t have to stay up wrapping gifts or baking pies the night before. Just pick up your event map at 5836 West Palmaire Avenue, then start exploring. Expect plenty of shopping and hands-on activities. There’s even a cookie crawl, but only while supplies last. Bring bottled water if you’d like to donate to relief efforts for vulnerable populations. Lynn Trimble

It's a Talk Show

If you like a little coffee with your comedy, head over to Scottsdale for a live taping of It’s a Talk Show, featuring comic Kerri Gallagher. She’s turning her weekly podcast into a comedy talk show, complete with panels of comics talking pop culture plus interviews with industry experts. Her next free family show happens from 1 to 3 p.m. on Saturday, July 13, at JOJO Coffeehouse, 3712 North Scottsdale Road. The casually elegant coffeehouse serves food, espresso drinks, wine, beer, and nonalcoholic beverages. Lynn Trimble

Cider on tap and colored pencils make a nice pairing when you’re ready for a relaxing Sunday. Grab your sketch pad and pens, or anything else you like to draw with, and head to Cider Corps, 31 South Robson in Mesa. That’s where Cider & Scribbles is happening from 11 a.m. to 5 p.m. on Sunday, June 14. No worries if you don’t have drawing supplies, by the way. They’ve got you covered. The event is free, but bring money for food truck fare or drinks from cider mimosas to cider slushies if you want to indulge a bit while you’re sketching your little heart out. In case you’re curious, the event is part of Mesa Arts Center’s Creative Catalyst initiative, which promotes community engagement through creativity. Lynn Trimble
KEEP PHOENIX NEW TIMES FREE... Since we started Phoenix New Times, it has been defined as the free, independent voice of Phoenix, and we'd like to keep it that way. With local media under siege, it's more important than ever for us to rally support behind funding our local journalism. You can help by participating in our "I Support" program, allowing us to keep offering readers access to our incisive coverage of local news, food and culture with no paywalls.
Make a one-time donation today for as little as $1.