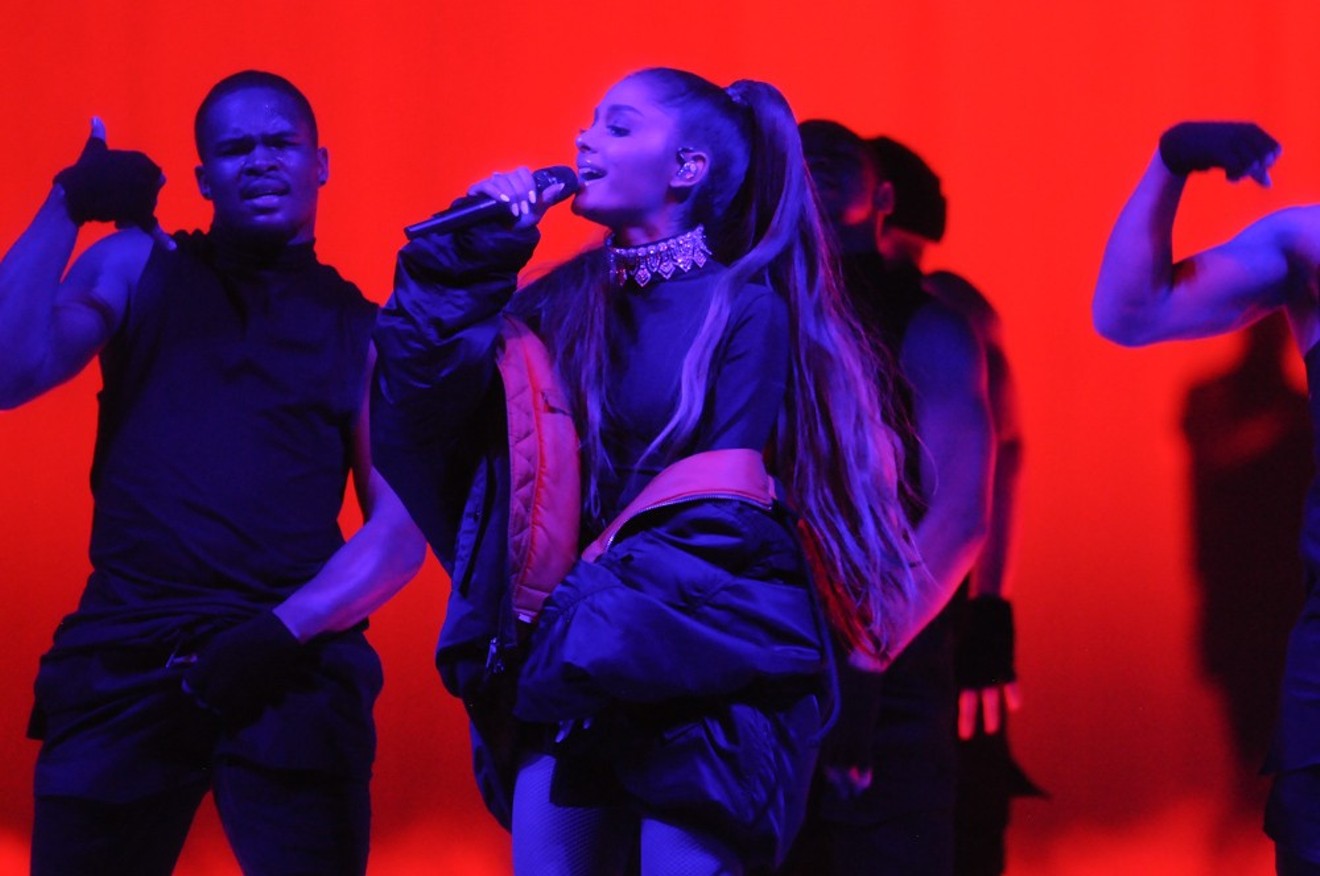 Ariana Grande looking fabulous. Miles Chrisinger
Hey Phoenix, we've planned your schedule. This weekend, you can dance the night away at Thank U, Next: An Ariana Grande Pop Dance Party, party like it's 1969 at the 50th Anniversary Celebration of Woodstock, or get your nostalgia fix during a screening of A Boy Named Charlie Brown. For more things to do, visit New Times’ calendar.

Want to see some wrestling matches that are far more entertaining and action-packed than the smackdowns that go down on TV? Bust out your best Bullet Club T-shirt and head for Sun Studios of Arizona, 1425 West 14th Street in Tempe, on Friday, August 16, for Lucha Libre Voz’s Blood Night.

Masked luchadores will face off in several matches, like when Drago battles Lucha Voz Ultra Champion Black Taurus and Chaoz and Vary Morales take on Lord Drako and a mystery partner in a tag team contest. Other grapplers (masked or otherwise) scheduled to participate include Septimo Dragon, Sairus, Hawaiian Lion, Gabriel Gallo, and Jack Evans from All Elite Wrestling.

The rope opera begins at 6:30 p.m. Tickets are $20 to $30, and a meet-and-greet with the wrestlers is an additional $10. Benjamin Leatherman

When it comes to revenge films, the 1976 supernatural horror flick Carrie ranks up there as one of best. Long before The Bride wielded her first samurai sword in Kill Bill or John Wick wiped out legions of mobsters, there was telekinetically gifted teenager Carrie White’s twisted tale of cinematic payback.

If you’ve never seen the film, which was based on the novel by Stephen King, White (played by Sissy Spacek) gets deadly revenge on the mean kids at her high school after being bullied and being drenched in pig’s blood at the prom.

Relive this slice of horror at 8 p.m. on Friday, August 16, at FilmBar, 815 North Second Street, when local podcast BS Movies presents a special screening of Carrie. There will be a trivia contest for prizes and live podcast recording following the movie. Tickets are $10. Benjamin Leatherman

Cool down at The Churchill.
Lynn Trimble

Expect to see some impressive rides during an ice cream social and car show coming to The Churchill, 901 North First Street, on Friday, August 16. They’re part of a free 6 to 10 p.m. event organizers are calling The Summer Cooldown, which also includes live DJ sets and a chance to check out new murals filling an adjacent alley. That’s Third Friday, by the way. So get to Roosevelt Row well before 6 p.m. if you’re driving and dreaming of finding a free parking space. While you’re out and about, check out other art offerings nearby, from street music to gallery exhibits. Lynn Trimble

It's all in the lighting.
Republic Records

Thank U, Next: An Ariana Grande Pop Dance Party

The Valley’s Ariana Grande fans are definitely getting spoiled this year. Not only is the pop star bringing her Sweetener World Tour back to town in December (after already performing here in May), but the folks from Club ’90s are putting on a glamtastic Grande-themed dance party this weekend at The Van Buren, 401 West Van Buren Street.

The 18-and-over affair, which has been dubbed Thank U, Next: An Ariana Grande Pop Dance Party, takes place on Friday, August 16, and will feature DJs spinning her tracks, as well as a mix of other pop and R&B songs. Attendees are asked to get dolled up in Ariana-inspired looks and there will be a photo booth and free giveaways for the first 300 people.

The party starts at 10 p.m. and admission is $10 in advance, $15 at the door. Benjamin Leatherman

Woodstock, arguably the most monumental music festival in history, is hitting an equally monumental milestone this month as it turns 50. And there are plenty of celebrations marking the occasion taking place across the U.S. this week, including here in the Valley.

Many of the same rock ‘n’ roll anthems that were performed back in ’69 will be performed inside The Van Buren, 401 West Van Buren Street, on Saturday, August 17, during the 50th Anniversary Celebration of Woodstock.

Tribute acts The Who Experience, Creedence and Company, and the Jimi Hendrix-style act Anthony Aquarius Mystery — all of whom pay homage to legendary bands that were at the original Woodstock — will perform during the event, which starts at 8 p.m. Tickets are $15 to $25. Benjamin Leatherman

Do Work That Matters!

Palabras Bilingual Bookstore is celebrating its fourth anniversary by shining a light on people and groups working for social justice in local communities. Join the fun, and learn more about what’s happening in your own backyard and beyond, during the free Do Work That Matters! event happening at the bookstore, 1738 East McDowell Road, from 11 a.m. to 9 p.m. on Saturday, August 17. Expect a day filled with performances, art, culinary offerings, and healing. From 6 to 9 p.m., Palabras will present an open mic event featuring poetry, music, storytelling, and more shared by people of color, as part of its ongoing POC It to Me series. Lynn Trimble

Mystery in the Museum: The Cryptic Caper

Maybe you missed the casting call for your favorite detective show, but you still jump at every chance to rock your best trench coat and spy gear. You’ll fit right in at Mystery in the Museum: The Cryptic Caper, happening at 6 p.m. on Saturday, August 17, at the Scottsdale Museum of Contemporary Art, 7374 East Second Street, Scottsdale. It’s a chance to hone your detective skills while you work with others on solving a museum mystery with a fun twist. Tickets are $20 each or $30 for a couple. Matching trench coats aren’t mandatory, but we want to see your best selfie if you go there. Lynn Trimble 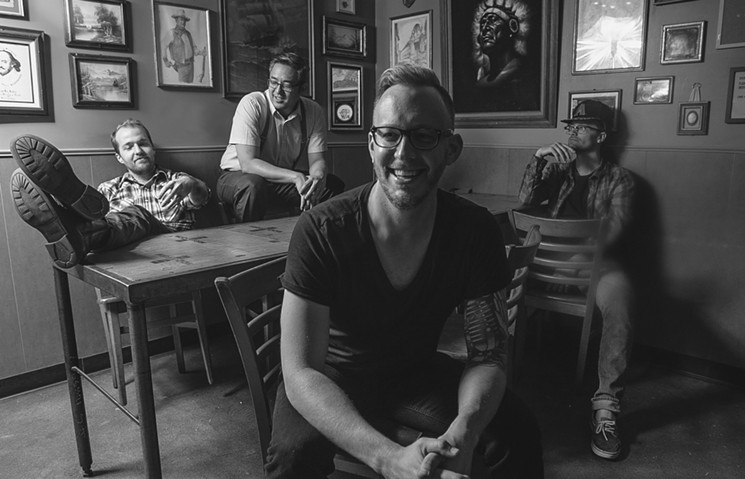 Music brought The Senators, a folk band that recently traded the desert for New York’s Catskill Mountains, together as high school band geeks in Phoenix. Now they’re on tour, making music geeks everywhere burst with pride. Hear more about their adventures in music and life when The Senators, who recently collaborated with Phoenix artists the Fortoul Brothers for their latest album cover, share stories and songs at Changing Hands Bookstore, 300 West Camelback Road. They’ll be joined by several Phoenix poets and writers. It’s happening on Saturday, August 17, when doors open at 7 p.m. Tickets for the 8 p.m. event are $12, plus fees. Lynn Trimble

There’s a long list of noteworthy 1969 happenings, including Woodstock, the Manson murders, Apollo 11, and the founding of PBS. It’s also the year the Peanuts comic strip gang, created by Charles M. Schulz, made it to the big screen in the animated film A Boy Named Charlie Brown. It follows the adventures of Charlie Brown after he enters the school spelling bee, even as he’s berated by Lucy and cheered on by Linus and the ever-loyal Snoopy. Celebrate the 50th anniversary of the beloved film at 2:30 p.m. on Sunday, August 18, with a screening at FilmBar, 815 North Second Street. Tickets are $9.95, and they’ll throw in a healthy dash of nostalgia for no extra charge. Lynn Trimble

Phoenix Mercury Fight for the Playoffs

It’s been a tumultuous season for the Phoenix Mercury. Its roster has been decimated by injuries, including Diana Taurasi, Sancho Lyttle, Essence Carson, and Briann January. Meanwhile, the healthy players on the court have had some trouble with rebounding and scoring.

And the season got even more tumultuous as star center Brittney Griner and Taurasi were suspended for their roles in a recent brawl against Dallas. Griner will still be out of action on Sunday, August 18, but Taurasi should return as the Mercury continue to battle for a playoff spot in their game against the New York Liberty on Sunday, August 18, at Talking Stick Resort Arena, 201 East Jefferson Street. Tipoff is at 3:30 p.m. and tickets are $9 to $216. Benjamin Leatherman
KEEP PHOENIX NEW TIMES FREE... Since we started Phoenix New Times, it has been defined as the free, independent voice of Phoenix, and we'd like to keep it that way. With local media under siege, it's more important than ever for us to rally support behind funding our local journalism. You can help by participating in our "I Support" program, allowing us to keep offering readers access to our incisive coverage of local news, food and culture with no paywalls.
Make a one-time donation today for as little as $1.