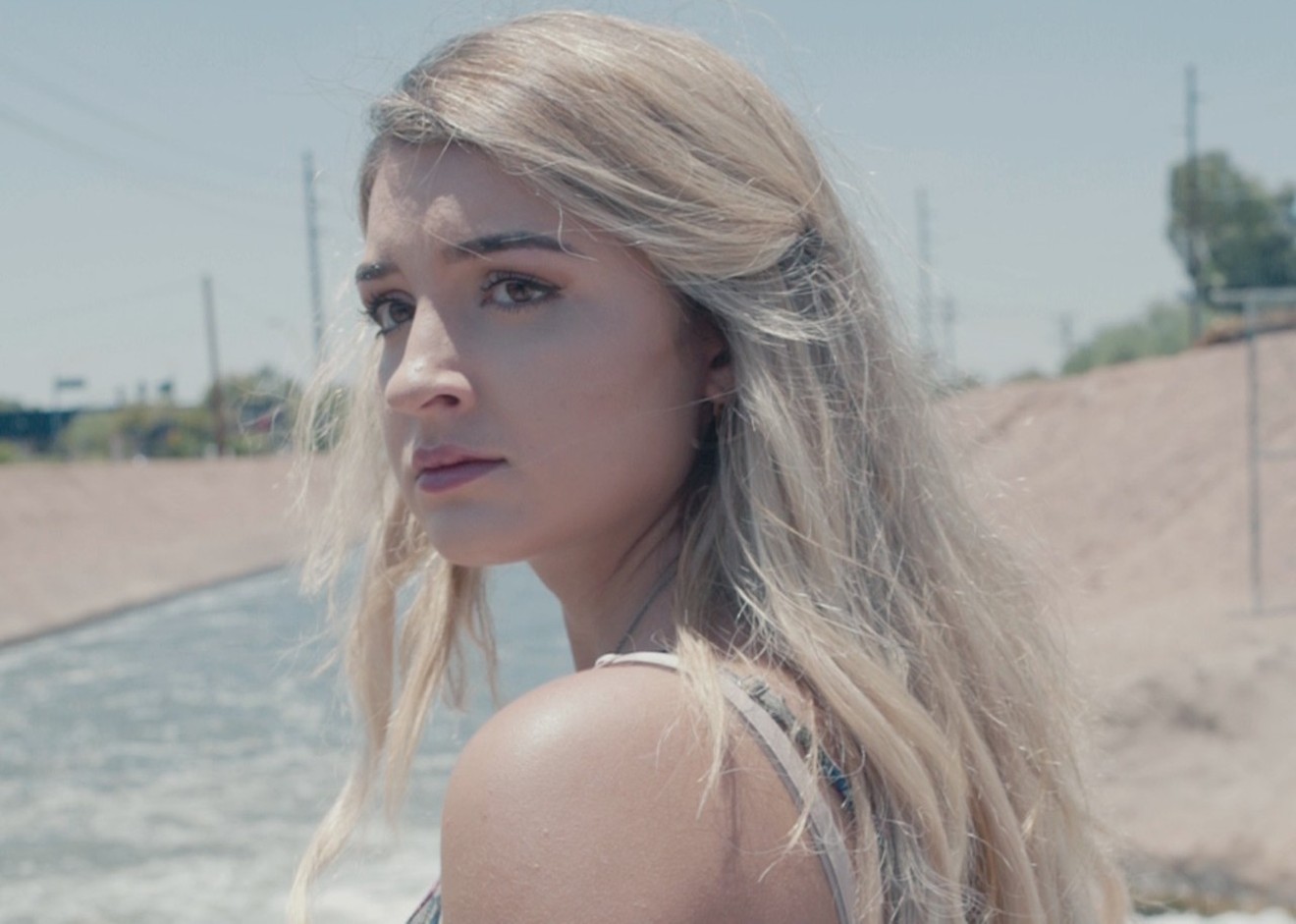 KK Starrs plays a girl who sells her virginity online in a new film by Travis Mills. Jared Kovacs 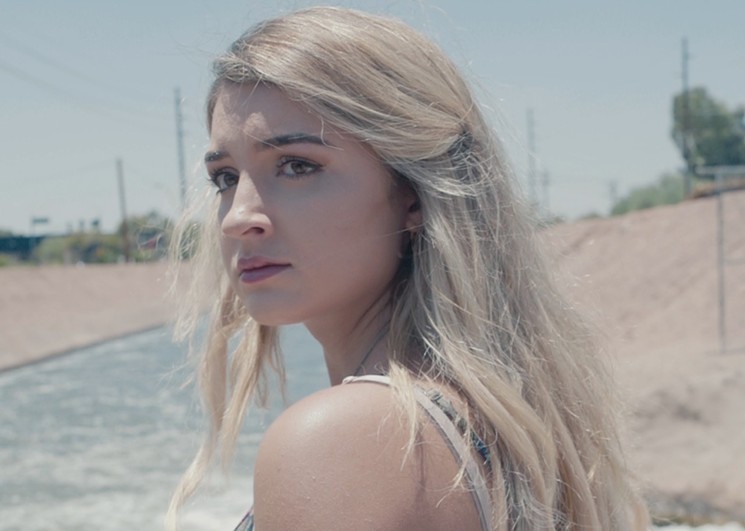 KK Starrs plays a girl who sells her virginity online in a new film by Travis Mills.
Jared Kovacs

A desire for a better life or a way out of their situations can push young women to try to sell their virginity. Arizona director Travis Mills’ new film, Silver Slipper, looks at what drives a fictional Arizona girl to go to such an extreme.

Mills will premiere the film on Saturday, May 25, at the Alwun House.

Silver Slipper follows the journey of Rian, a girl who decides to sell her virginity the summer after graduating from high school. She is living with her distant mother, trying to make money to start a new life.

In the film, 17-year-old local actress KK Starrs portrays the main character; other Arizona actors fill out the cast.

Mills decided to explore the topic when he noticed a trend of girls selling their virginity online.

“It has stuck with me since then, in terms of what that would be like for a young woman to do and how everybody would react to it in her life. … It just seemed like a good project. It seemed indicative of our times that someone could auction off their virginity online,” Mills says. 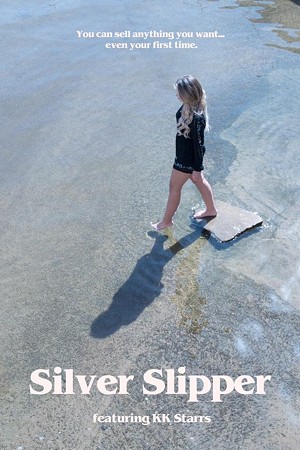 Jared Kovacs
For him, it was important to approach the controversial topic in a nonjudgmental manner. He hopes the film will spark discussion on a larger issue, affecting girls worldwide.

Starrs says she wanted to portray Rian in a three-dimensional way.

“I didn’t want people to hate on her and think what she was doing was wrong, because she is just a girl who is trying to get a better life for herself. So, I didn’t want it to be totally focused on her selling her virginity. There’s moments throughout the film where she’s with her friends, at graduation, and with her mom,” Starrs says.

Starrs says because of the subject matter, this role was more challenging than others she has played.

“When I first got the opportunity ... I was pretty hesitant about it because that is a very uncomfortable role to play," she says.  "Then, I was doing my research, and I was like, ‘Wow, the reasons that these girls are doing this are very sad and heartbreaking.’

"It was more than just selling their virginity. It was for a sick mom or trying to get into a school. It was very eye-opening.”

Starrs started acting at age 5 with Valley Youth Theatre. She is trained in acting, singing, and dancing, as well as guitar and piano.

In many of her film projects so far, she has played small-town girls.

She also portrayed Sharon Tate, the actress killed by members of the Manson Family cult, in the TV movie documentary Inside the Manson Cult: The Lost Tapes.

Already, the teen has dabbled in directing other actors and making her own film projects. Her film A Woman’s Touch has been accepted into film festivals in Arizona and Georgia.

She previously worked with Mills on Cornbread Cosa Nostra, a true crime film about the Dixie Mafia.

For Silver Slipper, Starrs and the other actors worked without a traditional script. Mills sketched out scenes beforehand, then gave the cast the freedom to improvise.

Mills says that with any film, dialogue and silent moments both hold weight in telling the story.

“When you are improvising with a film, you sometimes just have to let the silence be. You don’t need to fill everything with words,” he says.

The film was shot in a vertical aspect ratio, giving Jared Kovacs' cinematography a look similar to a cellphone video.

“We’re so used to looking at a wide-screen image now as filmmakers. When you flip that around, you see things very differently. You frame things differently, and suddenly the human body looks different in the frame,” Mills says.

He says compared to his other films, Silver Slipper is quieter and more character-driven. Audiences have to pay attention to subtle details.

“I don’t like to spell everything out in my work. … Yes, we get to know her, but she’s not just easily presented to us," he says.

The movie was shot in Arcadia, Arizona Falls, the desert by New River, and the closed Hotel Arizona in Tucson in 10 days, on a budget of $5,000.

Mills grew up on the Comoro Islands off the coast of Africa but attended high school and college in Arizona. He now shoots his films in both Arizona and Mississippi.

Running Wild Films, a film incubator company he co-founded in 2010, has made more than 100 short films and more than 10 feature films. His resume includes Porches and Private Eyes, a movie about three Mississippi women who became detectives to solve the disappearance of a local man, and the baseball film Duel on the Mound.

He is best known for his film Durant’s Never Closes, which is based on the life of local restaurant owner and gangster Jack Durant. The film stars well-known actors Tom Sizemore and Michelle Stafford along with local Arizona actors.

To make the kind of films that have meaning to him, Mills says he has had to make sacrifices, which include  residing in an RV with no working toilet or refrigerator.

“Living a comfortable lifestyle to me was never more important than the work. The work has always come first. I’ve at times lived very uncomfortably to make it work,” Mills says.

KEEP PHOENIX NEW TIMES FREE... Since we started Phoenix New Times, it has been defined as the free, independent voice of Phoenix, and we'd like to keep it that way. With local media under siege, it's more important than ever for us to rally support behind funding our local journalism. You can help by participating in our "I Support" program, allowing us to keep offering readers access to our incisive coverage of local news, food and culture with no paywalls.
Make a one-time donation today for as little as $1.
Laura Latzko