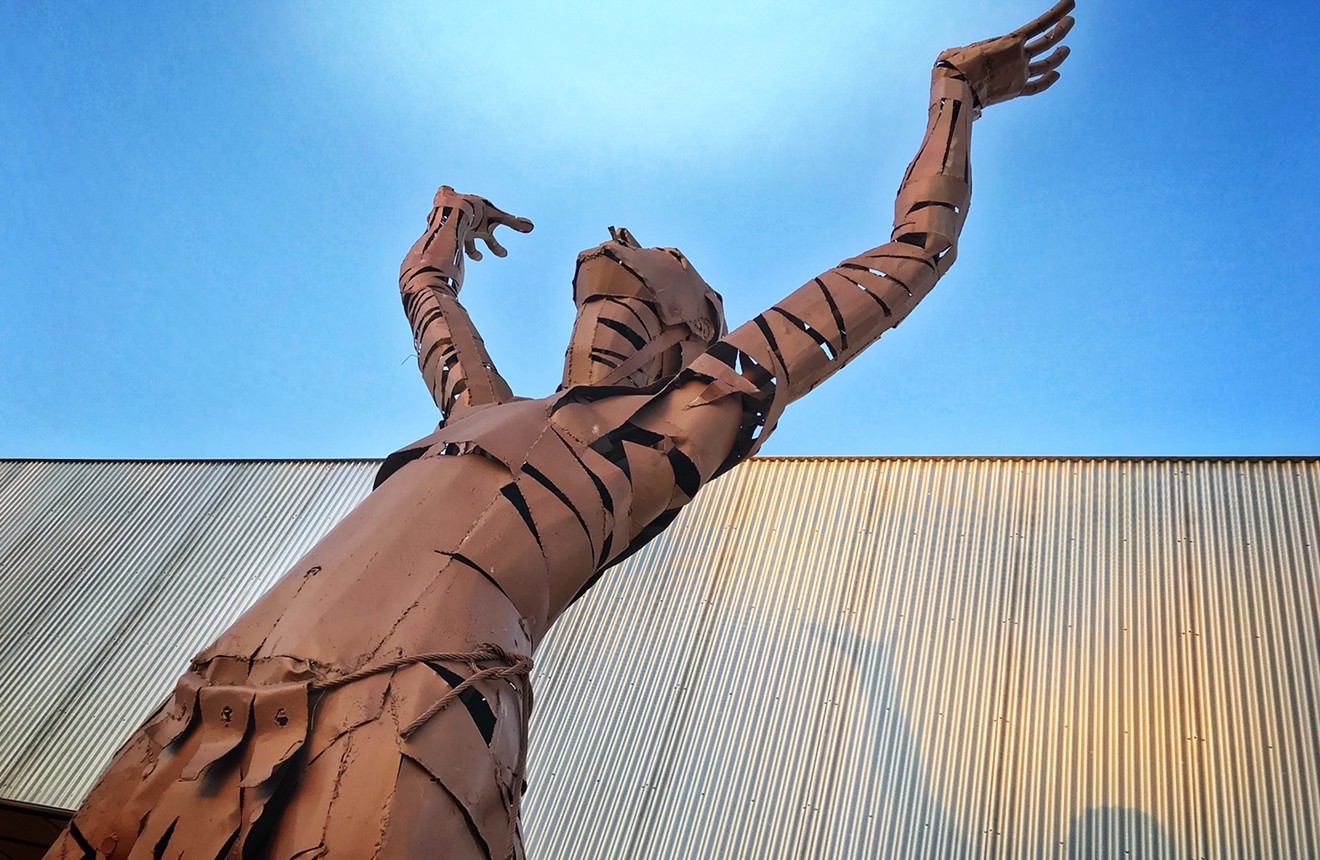 He's back. The Sun Worshipper statue has returned to Park Central. Todd Grossman 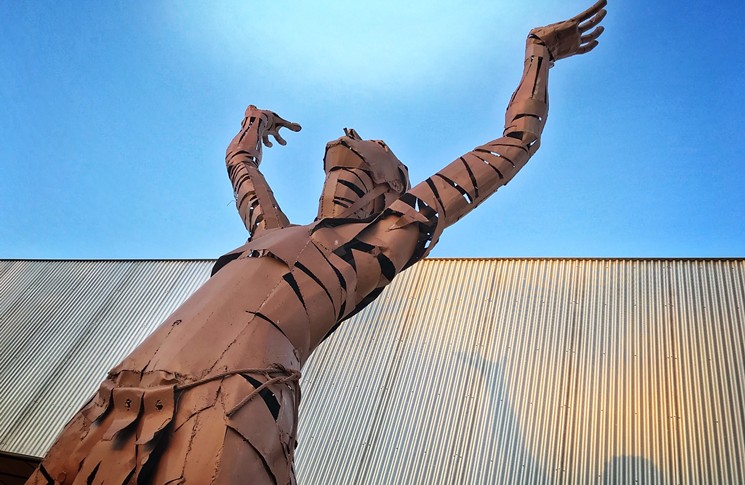 He's back. The Sun Worshipper statue has returned to Park Central.
Todd Grossman
He’d come from Phoenix, and had never left. Each of his homes had only ever been a few miles away from the one before. He was a tall man, and his first name was The, although almost no one ever got the rest of his name right. Instead of calling him The Sun Worshipper, people usually referred to him as The Statue at Park Central. Later in life, when people spoke of him at all, he was called The Statue That Used to Be at Park Central.

Today, he is once again being referred to as The Statue at Park Central. Were he a person, rather than an inanimate object, he might have felt glad. The Sun Worshipper’s owner, Charlie Sands, said last Friday that he felt glad for The.

“I always wanted to see him back at Park Central,” admitted Charlie, who’s responsible for the 19-foot-tall steel statue’s return to the 62-year-old shopping mall. “I am just trying to save one little part of our local history.”

Charlie, who's 69, had owned several businesses at Park Central over the years, most memorably a popular boutique called The Green Woodpecker, which he opened in 1974 and closed about a decade ago. On their way into or out of the mall, people often stopped to admire or be photographed with The Sun Worshipper, Charlie remembered.

“He was created by Walter Emory,” Charlie said. “He was a physician who decided he liked doing metal sculptures more than he did being a doctor, so he gave up medicine and devoted his life to his art. He had a home studio over at 20th Street and Bethany Home Road, and that’s where he forged The Sun Worshipper. I heard he moved to Camp Verde and was making art up there.”

When Park Central was sold in the mid-1980s, Charlie approached the new owners about their planned renovations. “I asked them about the statue, and they said they were just going to chop him up. The manager at the time said, ‘We’ll just have him dismantled and sold for scrap.’”

Charlie offered to take the statue. “They said, ‘Sure, if you can get it out of here, it’s yours.’” 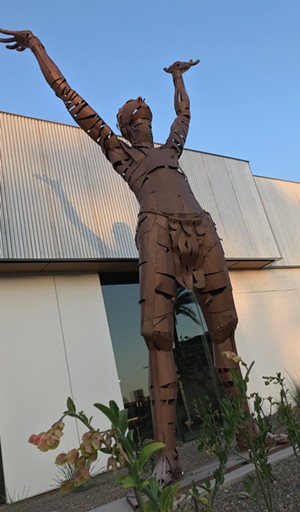 Will he bring Phoenix good luck?
Todd Grossman
He had the Emory statue moved to his home at 23rd Street and Shea Boulevard, where it overlooked his swimming pool for more than 20 years.

“Now, I’m not a superstitious person,” Charlie admitted. “But at the time I was given the statue, my business wasn’t doing so well. As soon as that statue was put in my yard, business improved and I met the woman I was to marry.”

When Charlie and his wife moved to Third Avenue and Bethany Home Road about 10 years ago, they took The Sun Worshipper with them. “He was in the front yard at that house,” Charlie laughed, “and people would come to the door and say they remembered the statue, and they loved seeing it again.” Usually the visitors would ask Charlie to photograph them with The Sun Worshipper before they left.

Over the years, different local companies offered to buy the big copper man. “I would always say, ‘No, I want it to go back to Park Central.’”

When Park Central was sold recently, Charlie approached the new owners to talk about his famous statue. “I told them if they would accept it back, I would donate it to the mall.”

There was one caveat to Charlie’s largesse: The Sun Worshipper would be on permanent loan to Park Central, and he would retain ownership. “That way, if they decide down the road that they don’t want it, I’ll have first option of finding it a new home.”

At first, Charlie wasn’t thrilled with The Sun Worshipper’s placement on the Third Avenue side of the mall, rather than out front, facing Central as it once had been. “But then last night, there was a story on the TV news about the statue’s return,” Charlie said, “and this lady had a good point. She said his hands were raised to the air facing St. Joseph’s Hospital, and she thought he was bringing good luck to the patients. I liked that.”

He thought The Sun Worshipper looked nice where it had been placed, between two bronzed windows. And he’s glad to see that birds are beginning to nest again in the statue’s kneecaps. “Those legs have been home to many bird families over the years,” he said.

Charlie said he was less happy about other things. “In this city, everything is being torn down,” he complained. “It pisses me off. I was raised here, and nothing looks the same. All you see is these huge apartment complexes going up.”

He paused. “At least we got this one thing right,” he said. “At least we got that statue back where it belongs.”
KEEP PHOENIX NEW TIMES FREE... Since we started Phoenix New Times, it has been defined as the free, independent voice of Phoenix, and we'd like to keep it that way. With local media under siege, it's more important than ever for us to rally support behind funding our local journalism. You can help by participating in our "I Support" program, allowing us to keep offering readers access to our incisive coverage of local news, food and culture with no paywalls.
Make a one-time donation today for as little as $1.