Unbridled turophilia, otherwise known as the love of cheese, knows almost no bounds. There seems to be an endless line of cheeses, endless variations upon variations, thereby proving the truth of what writer and critic Clifton Fadiman said when he called cheese "milk's leap toward immortality." Milk is milk, and can't change much while still remaining so. Cheese, by comparison, is almost an open-ended concept, and yet we come in contact with so few types in our everyday grocery runs. Leave it to a public servant to give us a choice of an array of cheeses, everything from Spanish goat cheese and blue French fromage to English Cheddar and Humboldt Fog from California. The servant in question is state Senator Ken Cheuvront, whose wine and cheese bar gets our vote for the best cheese selection. With scores of gourmet Artisanal cheeses on offer and an equally impressive list of vino, Senator Cheuvront's nosherie is a significant contribution to the local restaurant scene. Long may you cut the cheese, Senator! And may you forever be known as Phoenix's King of Curds.

Guadalupe not only has the distinction of being Phoenix's smallest suburb, but it's also the East Valley's favorite barrio. Residents from Chandler and Tempe come to the town for its shops and restaurants -- or maybe just to see how the other half lives. In any case, one of the more popular destinations is this rustic produce depot, with its bountiful piles of fresh fruits and vegetables with choices ranging from the more vanilla standards of a one-stop harvest shop -- such as Granny Smith apples or golden peaches -- to more obscure selections, like yucca root. Suburbanite gringos arrive in their SUVs, clad in D-Backs wear, bragging on their cell phones about the great deals they're getting on the different kinds of chiles for sale -- from habaneros to serranos -- some of which are roasted outside in a rotating grill. Others inspect the crisp leaves of bunches of cilantro and organic herbs, looking for any sign of wilt or wither.

Frankly, at night this 'hood's not so safe. But in broad daylight, on any given weekend, it's only a threat to your local supermarket.

Pizza is not what it used to be. At least, not since pizza delivery chains introduced the conveyor oven, which may churn out more pizzas per hour than traditional pizza ovens, but reduces the quality of the pizza because of all the openings in the oven that prevent a good, even heat. We recommend you make it at home -- and we don't mean by opening the freezer. Get yourself a pizza stone, which will ensure even heating. And then get yourself over to Riccobono's Italian Bakery and pick up a batch of pizza dough. The Riccobonos, a Sicilian family from Brooklyn, prepare the dough every morning at their Chandler bakery, using a recipe that is a cross between New York-style pizza and pizza from the old country. Pick up a pound, about all you'll need to make a large pizza. You'll be so happy, you'll forget the number to Domino's. And you won't even mind doing the dishes.

Our hands are stained with the amazing flavor dust (well, that's what we call it, anyway) that the geniuses of this wonderful snack spot sprinkle all over their delicious popcorn. We can't stay away from Pass the Popcorn, where we buy a daily bag of zesty seasoned kernels and sometimes eat the whole thing for dinner. When we're not glomming on the amazing caramel corn, we're buying tins of cheese popcorn (they come in several sizes and holiday themes) and giving them as gifts. Even the plain popcorn is unlike anything we've had anywhere else -- crisp and buttery and oh-so-slightly salted. (Try it with one of Pass the Popcorn's yummy Madagascar Vanilla Icees. No, really!) Can't make up your mind? Start with our personal favorite, the Cheezy Caramel Corn, which combines all the best flavors perfected by these local popcorn purveyors.

There are thousands of low-carb products on the market, which is a good thing, because most of them taste horrible. If you're looking for a little something to go with that plate of bacon and eggs -- maybe a low-carb tortilla or some chocolate for dessert -- it's all trial and error, 'til you find something edible. That's why we're so happy to have the Low Carb Mall. We have to chuckle at the name. It's a little ambitious, but then again, this shop is the Metrocenter of Atkins-friendly foods. You'll find rows of Atkins products, along with just about everything else on the market -- low-carb brownies, pasta, spaghetti sauce, margarita mix, peanut brittle, Gummi Bears, even something called "popped cheese" -- as well as vitamin supplements, books and anything else you might need to do the protein thing.

A few years back, some New Ager ruined the simplicity of fruit and ice by calling it a smoothie and adding enough supplements to choke a steroid addict.

But at AJ's Scoops, the art of the smoothie is returned to its essentials. You tell the nice folks behind the counter what fruits you like, and they'll purèe fine specimens of those fruits into a delicious drink topped, if you so choose (and you should), with gourmet whipped cream. Don't mention protein or echinacea or fiber boosts. It's all femme Greek to them. Just the fruits, ma'am.

Then sit down in one of the plush leather chairs and stare out the large corner-store windows at the bustlings of Second Street and Washington -- one of the most cityscape-ish scenes in the Valley -- and celebrate the fact that you're supporting a small independent business.

If AJ's smoothies aren't health-supplemented enough for you, think of it this way: The place has the ambiance of an intimate little pub. You'd be smoking cigarettes and drinking Irish whiskey in a real pub. Instead, you're having fruit.

Isn't that enough health for one day?

These flowers won't wilt, but we can't guarantee they'll be around long. Cookies in Bloom will deliver your loved one a lovely bouquet of iced cookies for any occasion. We like to challenge the folks at this little shop to get really creative, and they never disappoint -- they can decorate a cookie with anything! 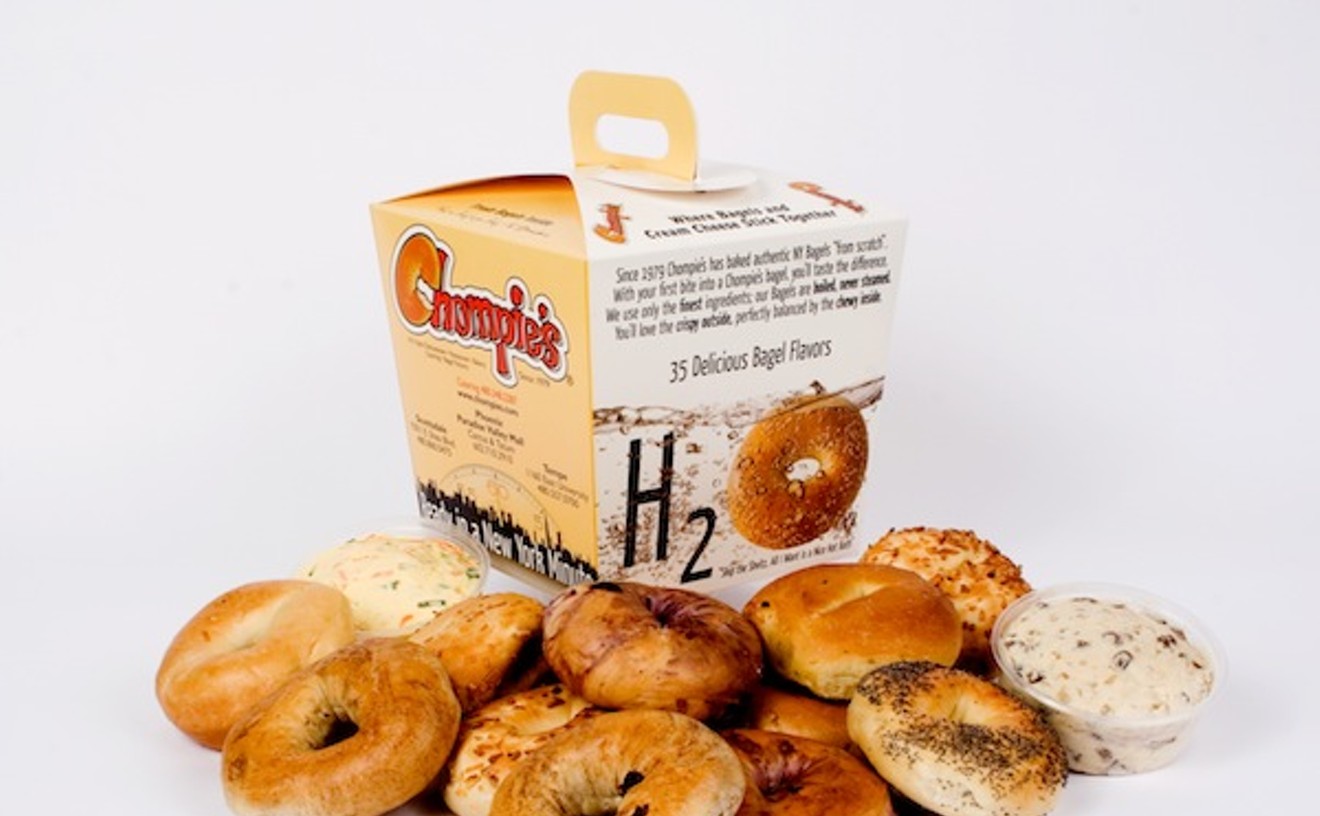 Many a wayward Gothamite has found himself or herself in the Valley thinking, "What the hell have I done?!" Sometimes you find them hyperventilating, in a state of shock that they can't find the Village Voice and the Daily News on every corner of P-town. There's even a special ward at the Mayo Clinic devoted to ex-New Yorkers who've never recovered. They lie around all day watching Seinfeld reruns with glazed eyes, muttering, "All I wanted was a matzo!" Poor sods. Someone should've told them about Chompie's. With locations in Tempe, Phoenix and Scottsdale, Chompie's is so close to the real deal, you'll think you hopped the F train to Kew Gardens. That's because these kosher-style delis are run by the family Borenstein, who themselves moved to the Valley from Queens back in the late '70s to establish an outpost of Gotham in the desert. Sure, they've got classic American and Italian fare, but we go for the bagels and bialys with a schmear, the kasha varnishkes and kreplach, the matzo ball soup and the brisket au jus, the stuffed cabbage and plates of pickles that come with each order. And if we're feeling especially sinful, we'll order a side of the chopped liver, the best in the Valley, which comes in ice-cream-like scoops and is so smooth and rich we think Ben & Jerry's should consider adding a pint of Chompie's chopped liver sorbet to its repertoire. So next time, if you see an expat New Yorker going into convulsions, send him to Chompie's. He'll survive. 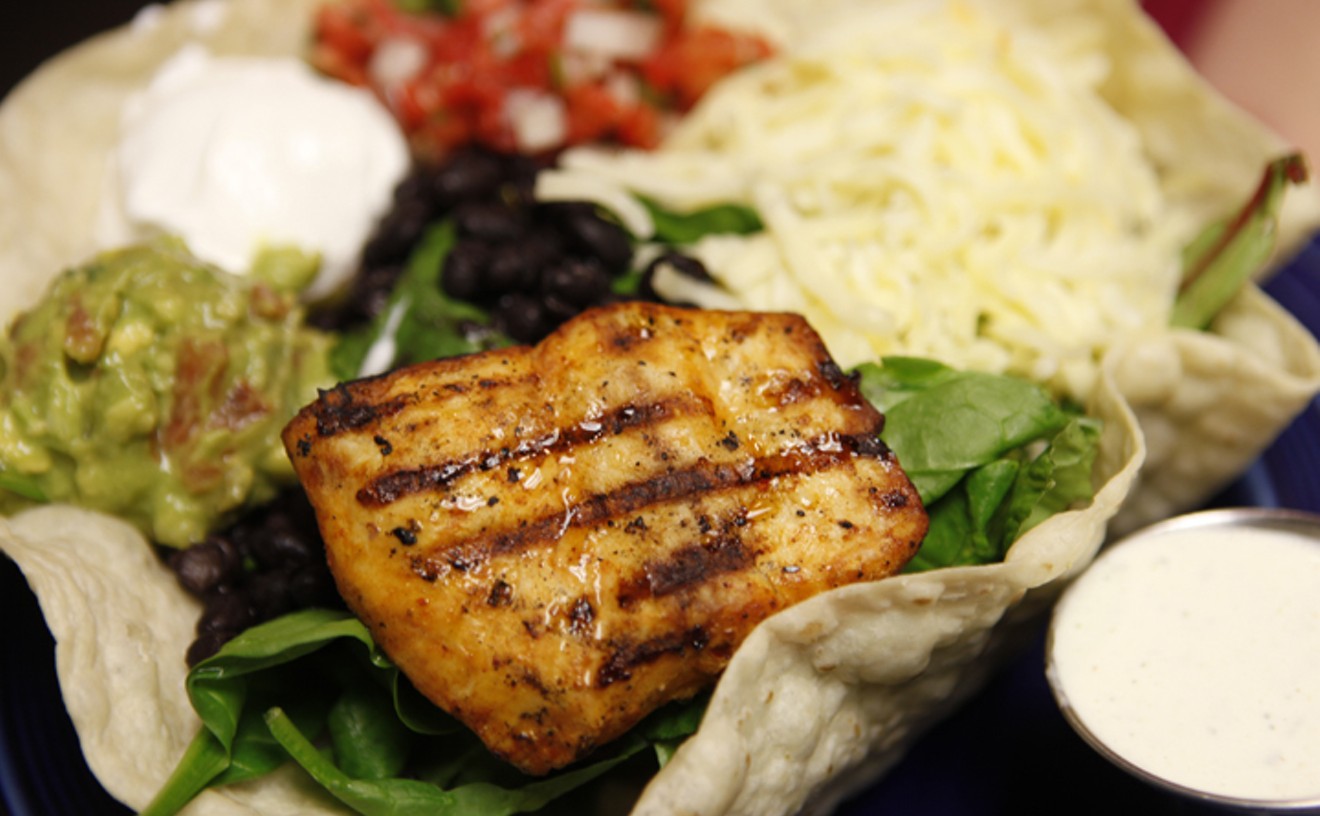 Jamie Peachey
There are several competing stories as to where the first margarita was mixed and by whom, and Lord knows, we're not going to do a tango with that tar baby. Still, most folks can agree that the traditionally tequila-and-lime-based concoction has been around for more than half a century. So you can pretty much bet the hacienda on the fact that the initial margarita, despite its disputed origins, was not served frozen but rather on the rocks. There are plenty of purists who turn up their nostrils at these alcoholic Icees for just this reason. But we don't give a roadrunner's patootie about tradition. What we want from a margarita is salt, blended ice, a bowl-shaped glass big enough to eat Froot Loops out of, and enough tequila to subdue a snarling bobcat. That's why we pick Scottsdale's Salty Se--orita as the purveyor of the Valley's best margaritas. Not only do SS's margaritas meet all our basic criteria, they're like the Arnold Schwarzeneggers of Mexican cocktails, mocking those served elsewhere in the Valley as "girlie margaritas." The SS has 100 different brands of tequila to get you effed up on, and, as an added plus, on any given night of the week, the place is wall to wall with hot dudes and dudettes loudly pounding those jumbo, high-proof Slurpees like there's no tomorrow. Hey, what better way to hook up while downing your favorite, icy-cold beverage? Love or Cuervo, we don't care, as long as they're willing.

You've probably heard many a Phoenician rave about Mariscos Ensenada's seafood pastas, like the bay scallops with cream chipotle sauce, or the prawns with spaghetti, olive oil, tomatoes and wine. Or maybe you've heard someone go on and on about Mariscos Ensenada's octopus, shrimp or sea snail tostadas. And some folks just can't shut up about the ceviche verde de camarn (shrimp marinated in a spicy green sauce) or the pescado relleno de jalba con crema (fish fillet stuffed with crab). But what rocks our boat at this no-frills mariscos is much simpler: the chips and salsa. We're not sure what's in that brown, peppery elixir, but it's just piquant enough to whet our palate for another frozen margarita without burning off the first layer of tongue. The chips themselves are fresh and not too salty, and just one dunk into that Mexican ambrosia is enough to give you a jolt. Really, now, how often does a salsa stick in your memory and make you want to slurp it like a high-octane smoothie? Okay, perhaps we're slightly obsessed, but that salsa freakin' rocks.