Sarah Whitmire
A visit to Carolina's is nearly a religious experience, one that's catholic, with a little "c," meaning it's almost universal in its appeal. Park yourself in front of the main entrance to the dingy, warehouse-like structure with its school-cafeteria tables and chairs, and you'll see what we mean. Every sort of person, regardless of class or ethnicity, walks through those doors: a businessman in wrap-around sunglasses, and a construction worker on a lunch break; a pregnant woman by herself, and a student on his way home from school; the fat man with food on his shirt, and the primly dressed grandma back from a church social; a mother with an entire brood surrounding her, and an indigent fellow who's scraped enough together for a bite to eat. They all place their orders at the main counter surrounded by a garish red-and-white menu, take their numbers, and sit politely waiting to be called. It's an amazing cross section of humanity, mostly brought here by the same thing: Mama Carolina's tortillas. Maybe the fat guy wants a machaca with egg, or the pregnant lady, a green chile burrito. The student, a chicken enchilada, and the homeless man, a cheese tortilla. But they're almost all wrapped in or are accompanied by those magnificent flour tortillas, as light as air, slightly chewy, and somewhat smoky. They have corn tortillas, too, but it's those flour ones that we revere above all else. No wonder Carolina's sells thousands a day.

Some Mexican restaurants try to be so authentic in their decor, they neglect the food. Other Mexican restaurants prefer to let their food speak for itself. At Tepic Restaurant, which opened earlier this year at Phoenix's original Denny's restaurant on Van Buren Street, the authenticity is most notable in the restaurant's tacos. Juan Romero, who spent two decades working in the Valley's restaurant industry, named the joint after his hometown in the Mexican province of Nayarit, which lies on the western coast of Mexico, south of Sinaloa. Customers either sit at one of the booths or at the old-fashioned soda fountain counter that still separates the kitchen from the dining area. If it weren't for the salsa bar at the corner of the counter, you would think you'd wandered into an old American diner.

That is, until you try the tacos, which are served on a warm homemade tortilla and come in five variations: carne asada (grilled steak), pastor (roasted pork), lengua (beef tongue), buche (beef neck) and cabeza (beef head). A bite into Romero's tacos is not just a run for the border, but an excursion deep into his homeland. 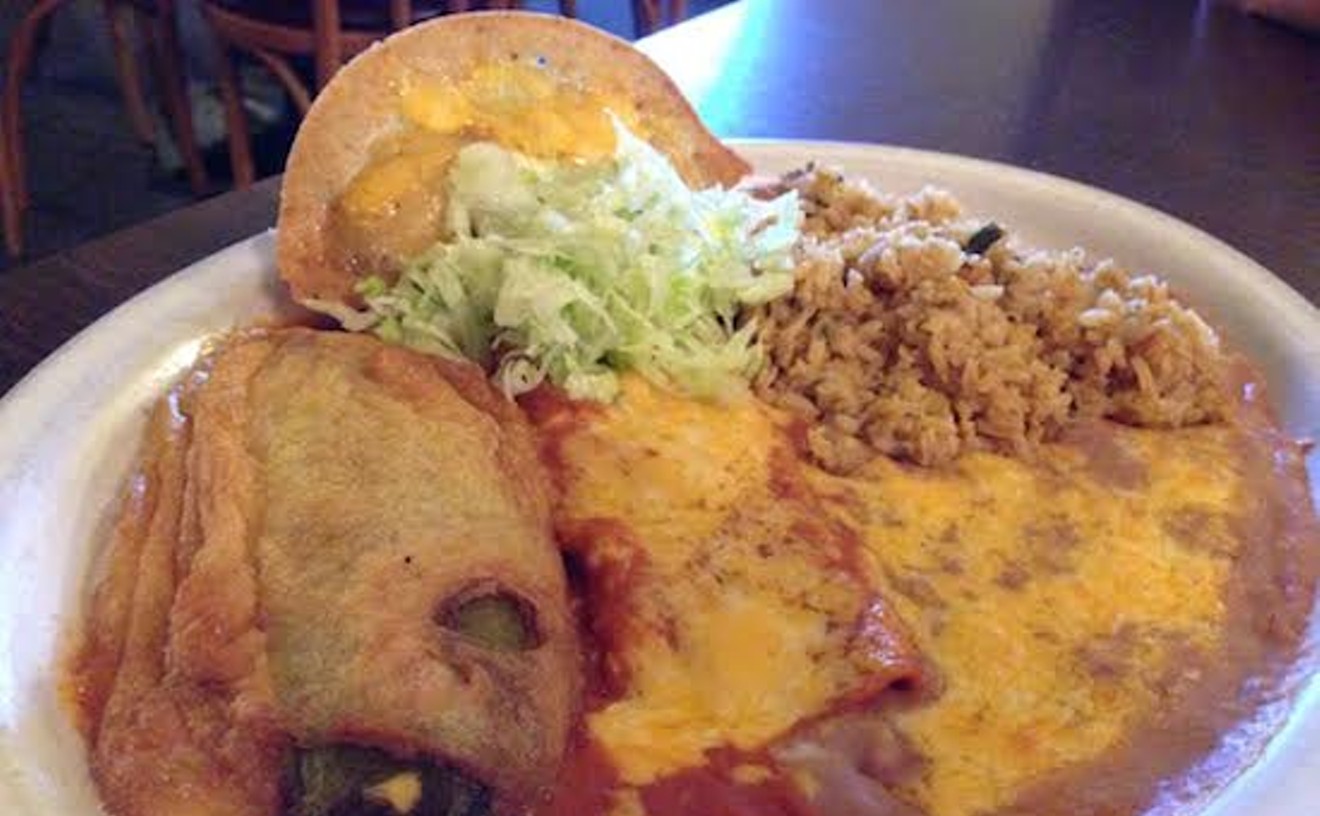 Natalie Miranda
The enchilada is a hard dish to nail. We've found our favorite at a restaurant owned by the multi-generational Reynoso clan, who hail from the Globe-Miami area and create their dishes using family recipes.

From the first bite, you experience the distinctively spicy yet smoky flavor of fire-roasted green chiles. The Reynosos don't skimp on the meat -- in this case, lean and flavorful beef, devoid of any grease or gristle.

If we didn't know better, we would have licked the plate clean and asked for a look-see at the family cookbook. Such is the burden of good manners and proper restaurant etiquette. You might handle the situation otherwise.

Hot dogs are as American as baseball and apple pie, but for many Mexicans, your typical stateside hot dog adorned with ketchup, mustard and relish is about as bland as a wet dachshund. Thankfully, we live in a border state where the Sonoran-style hot dog can be purchased at hot dog stands throughout the Valley. Wrapped in bacon and smothered with pinto beans, mayonnaise, jalape--o sauce, guacamole, grilled onions, pinto beans, chopped tomatoes and mushrooms (as well as mustard and ketchup if you wish), the Sonoran-style hot dog would make Dagwood Bumstead proud.

But at Nogales Hot Dogs, located at three stands throughout Phoenix, it won't give him heartburn. The secret, says owner Hernan Rivera, is that instead of dropping the bacon-wrapped hot dogs in a vat of hot grease, he wraps the dog in bacon and bakes the concoction until it is nice and crispy.

When it comes to Mexican seafood cocktails, whether it's shrimp and octopus or shrimp and oysters, Serrano's beats the square pants off SpongeBob. This large, homey mariscos spot near 32nd Street and Shea may not be in the hippest neighborhood in the PHX, but you'll have a hard time finding its equal elsewhere in the Valley, unless it's the no-frills place that the Serrano family runs near 16th Street and Osborn. The seafood tostadas are big and heaping with the ocean critters of your choice, and the oysters are fat, flavorful, and fresh from the Gulf -- unlike the anemic bivalves one is often stuck with here in P-town. Another specialty is a whole mojarra (tilapia) served Veracruz-style in a tomato-and-onion sauce, with head and tail intact. Believe us when we tell you that when you're finished licking that fish, it'll look bonier than Mary-Kate Olsen's butt. Wash it all down with a michelada, a Clamato-based cocktail cut with Corona, and you'll be crooning like a mariachi in Mexico City, Jack.

Chef Stacy Phipps is the man when it comes to soul food in this town. Sure, there are a number of purveyors of Southern home cookin' in the PHX, but Phipps is the King of Collards, the Grand Pooh-Bah of Gizzards, the Prince of Pulled Pork, and the Supreme Sultan of Smothered Fried Chicken. Now, you could spend hundreds, maybe thousands of dollars on a culinary tour of the former Confederacy, but why waste the time and ducats when Stacy's on East Jefferson serves up a mess of vittles that'd put Andy Griffith's Aunt Bea to shame? Erstwhile Southerners can attest to the fact that Stacy's fried okra, frogs' legs, chicken fried steak and cornbread are the bomb, as is Stacy's sweet tea, which is so sweet it might double for Mrs. Butterworth's syrup on your pancakes. When it comes to deep-fried poultry, even Colonel Sanders would have to kowtow were he alive to sample Stacy's bird. And how can we forget Stacy's barbecue, catfish and peach cobbler? Why, if those folks at the Food Network had any brains, Stacy'd have his own TV show. But maybe that's not such a good idea. Then who'd fry us up a basket of chicken gizzards when we're hungry? Readers' Choice: Mrs. White's Golden Rule Cafe 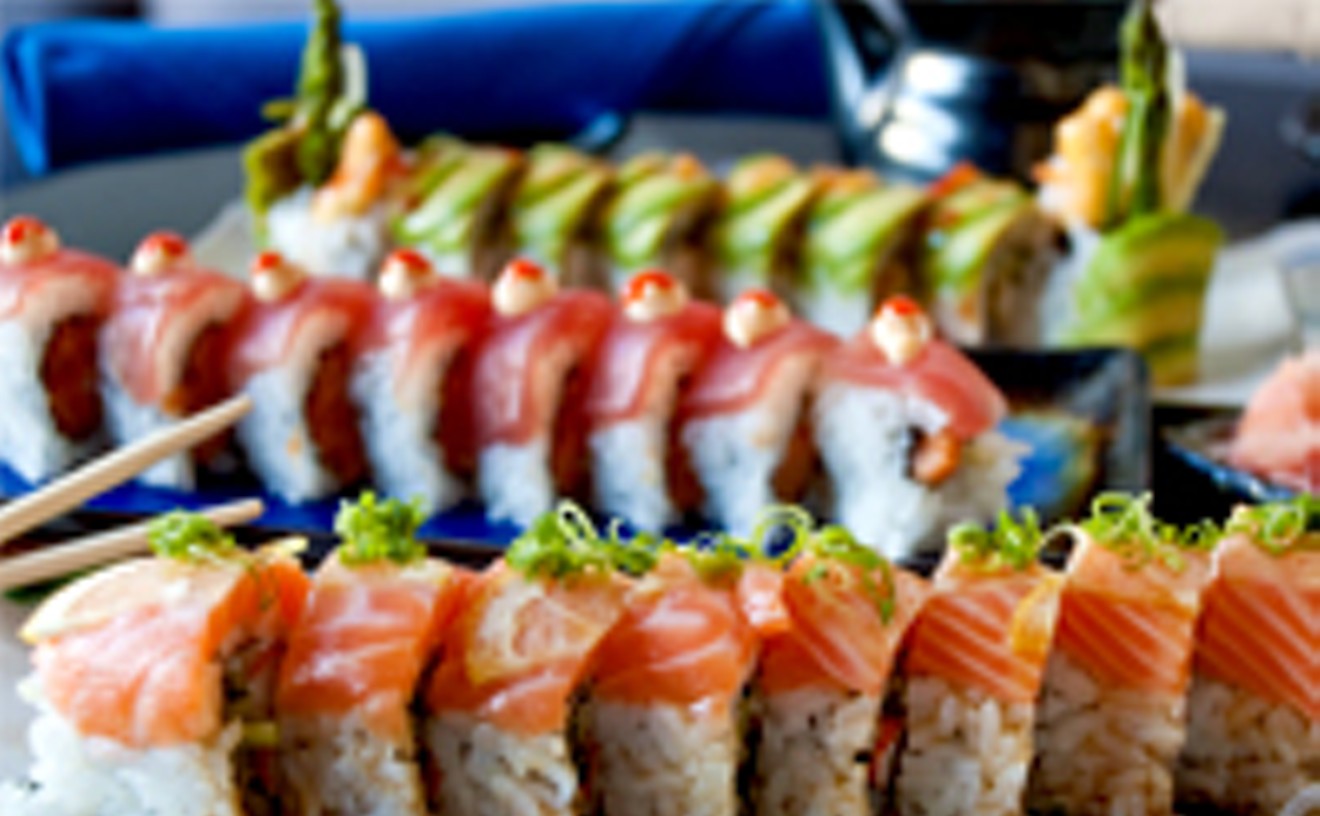 Meagan Simmons
If that ultimate stoner character Jeff Spicoli from Fast Times at Ridgemont High ever springs to life from your television set while you're peeping the DVD for the umpteenth time and asks you for directions to "some awesome sushi, mon," draw that young man a map to the Valley's Best New Restaurant, Blue Wasabi Sushi and Martini Bar, way up at DC Ranch. Not only does Blue Wasabi have blue wasabi (the miracle of food coloring, folks), and splendid signature martinis, like the lip-puckering, blueberry-flavored Berry White, or the Chocolate Twist, which tastes like a vodka-cr'me de cacao milk shake, there's also the sushi -- better than anything you'll get outside of Japan. Among Blue Wasabi's rolls of renown: the Surf and Turf, lobster and cucumber topped with seared beef tenderloin; the Killer Bee, a California roll topped with eel and mango; and our fave, the Spicoli, spicy octopus and barbecue Fritos topped with avocado. That Spicoli's so tasty, why, even Mr. Hand would enjoy noshing it. And what will Spicoli say? Probably, "bitchin' sushi, dude." Readers' Choice: Zoë's Kitchen 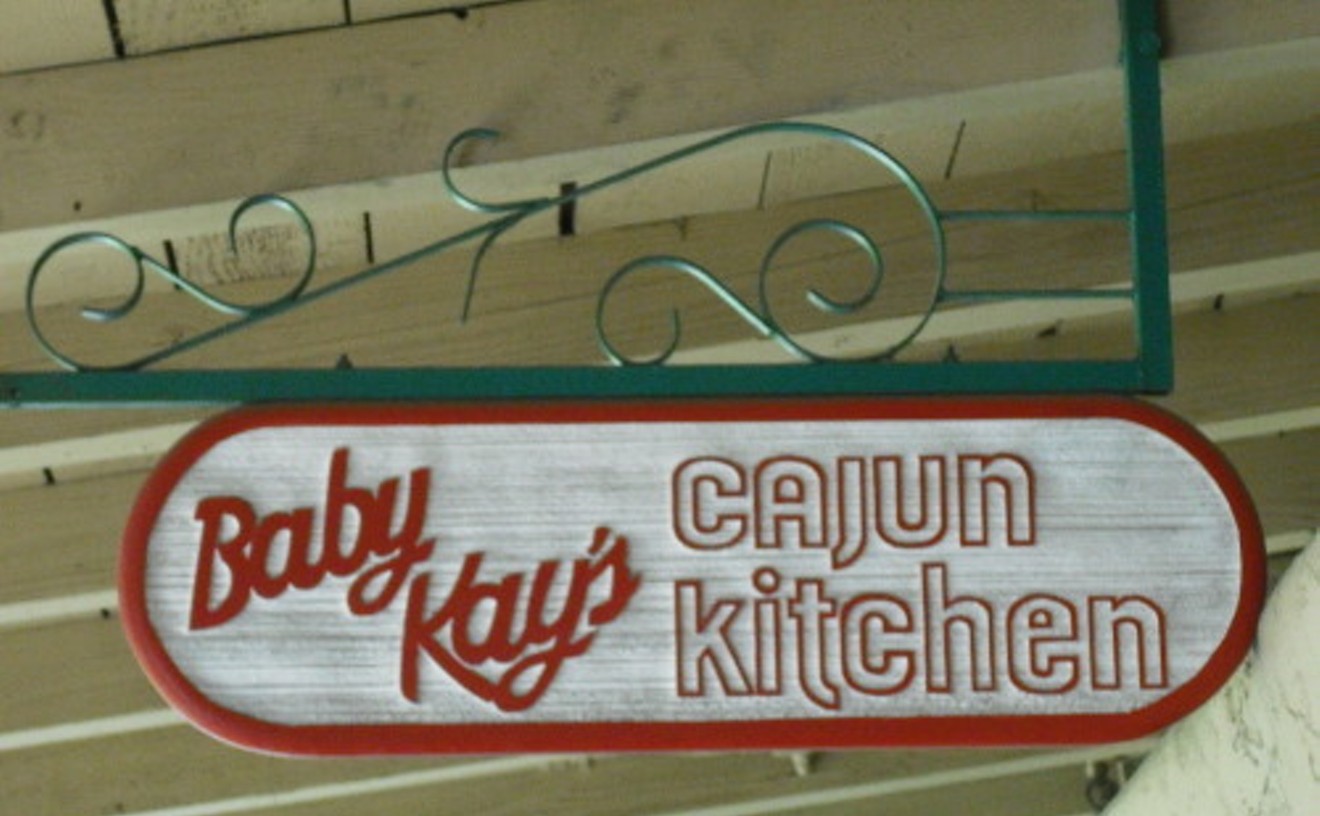 Dinner at Baby Kay's Cajun Kitchen makes us wanna bitch-slap Emeril Lagasse, it's so good. Of course, we never were crazy about that lame-ass honky and his brainwashed studio audience, which cheers every time the New Orleans-based chef yells "Bam!" and adds salt to a pot roast. Why, the guy's actually from MASSACHUSETTS, people! And he must shave between his eyebrows to keep them from growing together. Anyway, when we want real Cajun cuisine, we don't watch the frickin' Food Network; we mosey on down to Baby Kay's Cajun Kitchen, where we can eat the real deal: shrimp rmoulade, Louisiana crab cakes, red beans and rice, jambalaya with andouille sausage, and our fave, the spicy-as-all-get-out boudin, a fried Cajun sausage stuffed with pork and rice that's served with Baby Kay's apricot-pepper jelly. Baby Kay's got po'boys, too, as well as bowls of gumbo, catfish with crawfish sauce, and some of the best garlic bread we've ever tasted. But that boudin is what we dream about at night. Well, that and Emeril choking on his own touffe.

You can hardly throw a rock without hitting an Eye-tie eatery in the Valley. But very few have what it takes to earn our loyalty. This is especially true of upscale Italian places where you might have to part with your Roth IRA to pay for some watered-down minestrone, a bowl of calamari, and a plate of pasta with a meat sauce that Ragú could beat. That's not the case at one of the few upscale Italian restaurants that enjoys our regular patronage, Daniel's. Of course, you might have to hock your Rolex to eat here, even if you get to keep your IRA. But believe us, Daniel's is worth every penny. The menu is exquisite, with such saliva-inducing offerings as wild mushroom ravioli in a butter-herb sauce with fresh blueberries, and oven-braised Long Island duck, served with a rice/black-truffle croquette that'll curl your toes with ecstasy. Why, if we had enough dolo, we'd eat here every night. Maybe we'll cash out that IRA after all, eh? Readers' Choice: Tomaso's

Do not fear the tomato. The tomato is your friend. That's what we'd like to tell most Italian joints in Greater P-town. See, for their chefs, spaghetti and meatballs has become one of those quaint dishes of yesteryear, like baked Alaska and beef Wellington, that they've completely forgotten how to make. Judge them by what they serve up, when they bother to serve it up: chewy pasta, a meager amount of marinara, and meatballs like rocks. In fact, this situation is so bad in town that we have to hightail it to Fountain Hills for the best neighborhood Italian food in Maricopa County. At least Redendo's Pizzeria and Pasta makes it worth the drive. This spot serves Brooklyn-quality pizza and pasta in an environment that makes you feel like you dropped through the proverbial rabbit hole into 1940s America, with reproductions of anti-Hitler propaganda, World Series posters, and black-and-white photos of WWII fighter planes. But the best thing about Redendo's is the spaghetti and meatballs, with plenty of great-tasting marinara and pasta, and fat, tender meatballs that are unmatched in the Valley. For those whose neighborhood includes Redendo's, lucky you. Readers' Choice: Oregano's Pizza Bistro