Phoenix is bound by history, be it the scattered ruins left by the Hohokam or the Old West cowboy and mining heritages created by pioneers pushing west. But some of the true greatness of Arizona's history is embedded in its geology — how the land was formed, baked, eroded, and mined, exposing all sorts of natural treasures to experience and elusive mineral treasures to seek. It is this adventure for natural and mineral bounty that makes the eastward run to the old (and still active) mining towns of Miami and Globe such a rich experience.

Start out of the Valley heading east on the Superstition Freeway, bending around the base of the Superstition Mountains. Stop by Arizona's oldest botanical garden (Boyce Thompson Arboretum in nearby Superior) and roll down Miami's main drag, Sullivan Street, before getting into Globe. Founded in the 1870s, Globe became the Pinal County seat, as well as one of the richest copper-mining areas in the country. Today, its oddities include the Elks Lodge Building (the "World's Tallest Three-Story Building," according to Ripley's Believe It or Not), one of the last remaining copper smelters in the United States, and the massive Besh-ba-Gowah pueblo, as well as a multitude of old mining town streets lined with shanties and old homes from the turn of the 20th century.

For the return trip home, continue to head back through time along the Apache Trail. The first section runs up along the west bank of Lake Roosevelt, passing by the Tonto National Monument cliff dwellings and the Theodore Roosevelt Dam. Just beyond the dam, the remainder of the Apache Trail is dirt, making for a very slow but incredibly beautiful drive through the heart of the Superstition wilderness, along the Salt River, and past Apache and Canyon lakes. The late-afternoon, early-evening hours turn the desert to hues of gold, red, orange, and magenta as the trail runs alongside high cliffs. Beware of some killer sunset glare as the road drives westward. The dirt will begin to feel endless, but it kicks out at Tortilla Flat as the paved road twists through Apache Junction and back to the Superstition Freeway. 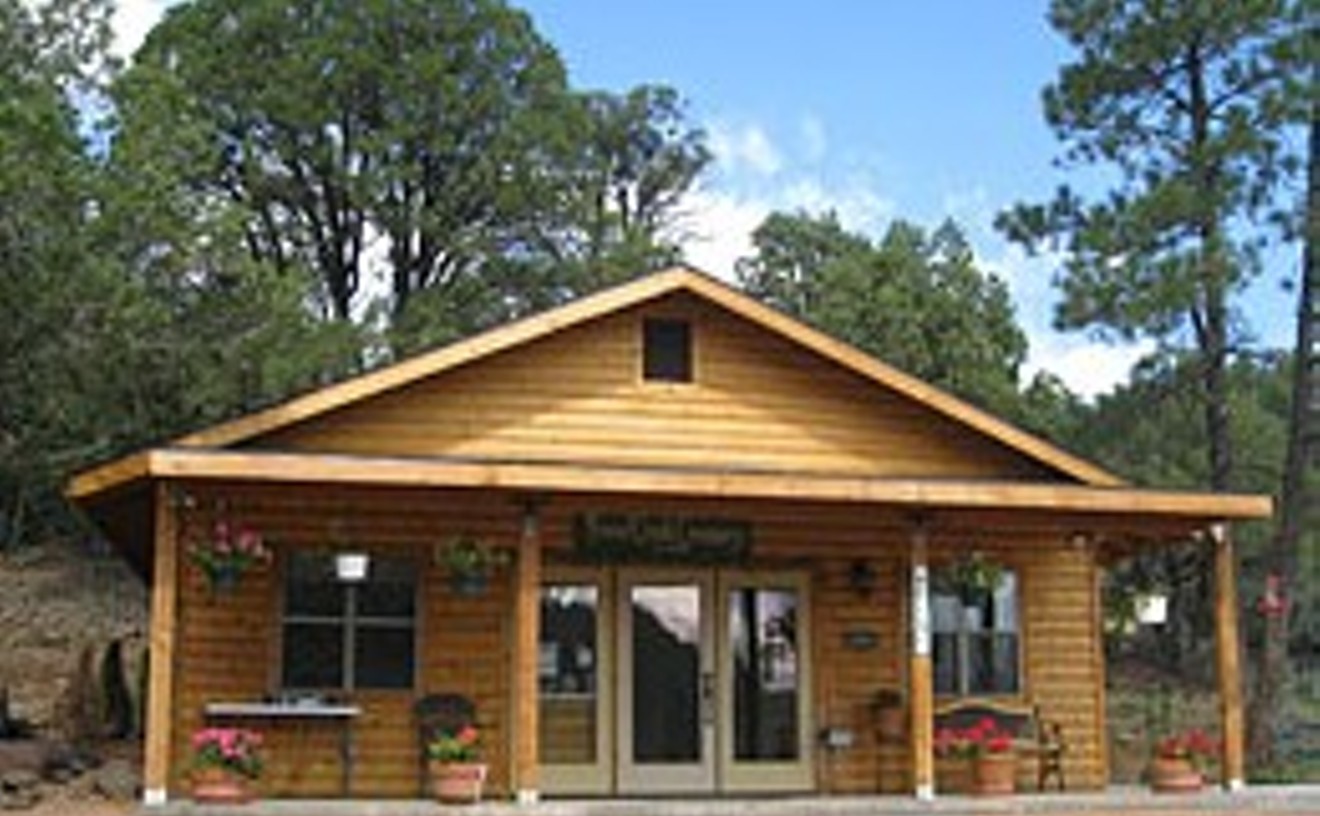 When the mercury levels in Phoenix skyrocket into the triple digits, it's time to start planning an escape route. When we're looking to get out of town for a quick visit to cooler temps, we like to jump on the Beeline and book it up to Strawberry for a dose of pine trees, fresh air, and maybe a cheese-making class and a little quality time with a goat or two. Just an hour and half outside of Phoenix, the Fossil Creek Ranch in the heart of the Tonto National Forest offers everything from hiking with llamas to fudge-tasting from their very own fudge factory and cheese-making classes using the milk from the ranch's very own goats. Bring the kiddos up for the day to play with the baby goats, meet the pretty llamas, and take a tour of the creamery. The ranch is open every day except for Christmas Day and admission is just $3 per person or $10 per carload.

Arizona is home to some of the most amazing, scenic, and popular national parks in the United States. The Grand Canyon, the Painted Desert and Petrified Forest, Wupatki and Sunset Crater, and Walnut Canyon, among others, are all within two hours of Flagstaff. Typically, it would cost a family of four $20 to $25 to enter each park, but for a couple of special weekends, these amazing places will be open and free to all. Tie in some low-cost camping at or near one of the parks, and — presto! — there's a weekend getaway in which you'll take in some of the state's greatest places for just the cost of gas and food. Of course, the Canyon is worthy of a week unto itself, but a full day on the south rim, tied in with a circuit of Wupatki/Sunset Crater, makes for an inspiring day capped by a night camping next to the lava flow at Sunset Crater. On day two, head east of Flagstaff to Walnut Canyon and the colorful duo of the Petrified Forest and the Painted Desert. If there's time either on the drive up north or the return to the Valley, be sure to stop at Montezuma's Castle in Camp Verde. On any weekend, it's worth the trip.

Vegas, baby. Er, Indian Bend, actually. Indian Bend and Loop 101, that is, where Sin City meets Scottsdale in the form of Talking Stick Resort, the swanky 15-story, 497-room casino that, especially by night, can make you feel like you've just taken an airport cab to one of the hipper spots on the Vegas strip, one of the places you won't see someone else's grandma sitting stone-faced, Pall Mall in one hand, while she hits the buttons on a Wheel of Fortune slot machine. Sure, they've got slots, and all the other amenities of a gambling establishment, but the venue's newness, design, lavish high-end buffet, and posh digs guarantee that a better-looking crowd will surround you as you fork over your money to the dealer or machine of your choice. Which, along with a few cocktails, will help ease that pain you're feelin' in your wallet once you get through. 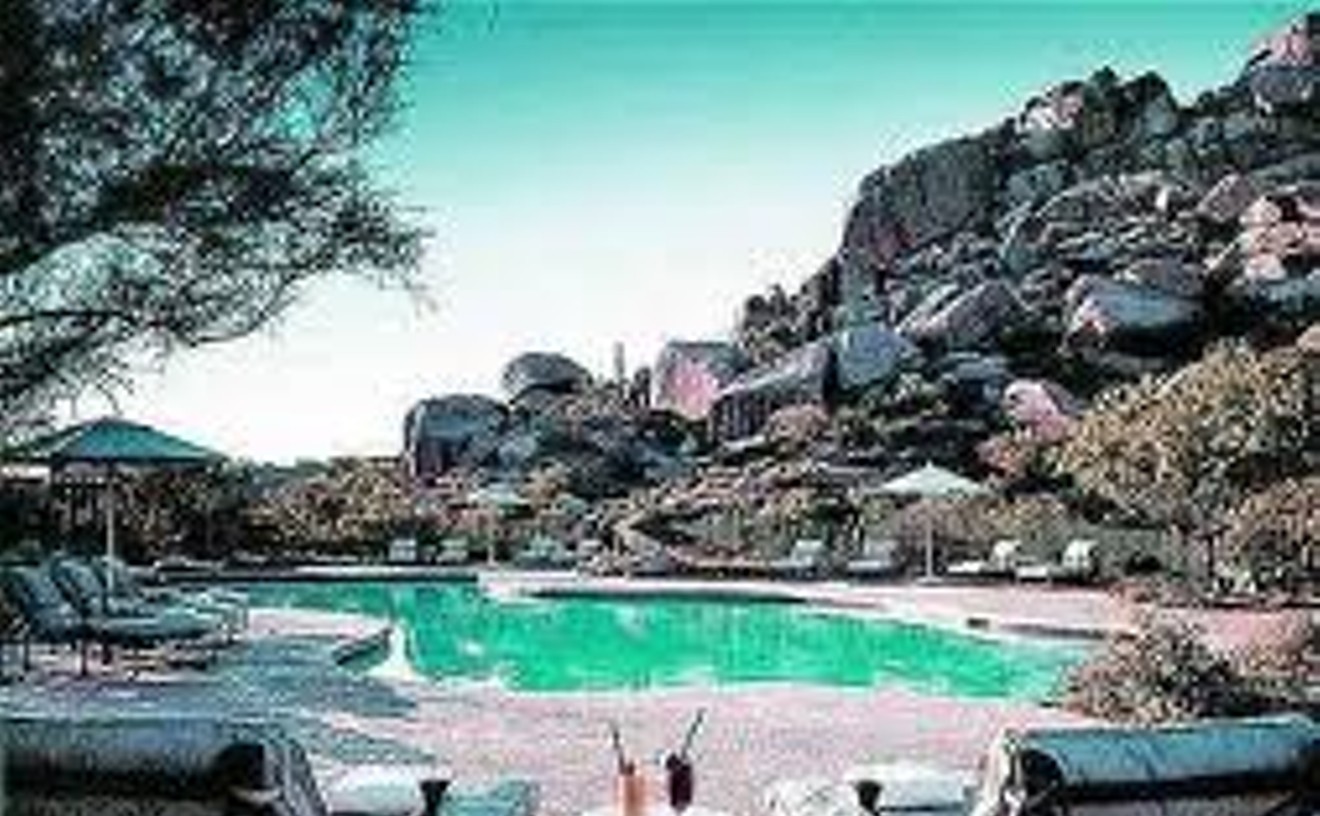 The ideal luxury resort hotel is able to maintain the perfect atmosphere so that — no matter the person or their preferences — everyone can feel relaxed and welcome. At The Boulders, lifelong Phoenicians as well as international travelers can get away from it all and experience a true escape. This Waldorf Astoria hotel is located in quiet, peaceful Carefree, close enough to the big city to be convenient while far enough away to feel removed. Guest rooms include everything from spacious suites with built-in fireplaces to luxurious stand-alone haciendas with three bedrooms, an outdoor patio area, and a full kitchen with top-of-the-line amenities. The Boulders Resort also boasts two championship golf courses, a terraced tennis garden, four swimming pools, and The Golden Door Spa. There are six places to grab a bite on the premises, including Palo Verde, with stunning views of the golf course and duck pond, and Spotted Donkey Cantina, which serves a classic Southwest-Mexican menu and crowd-pleasing frozen margaritas.

Oasis Pool at the Clarendon Hotel 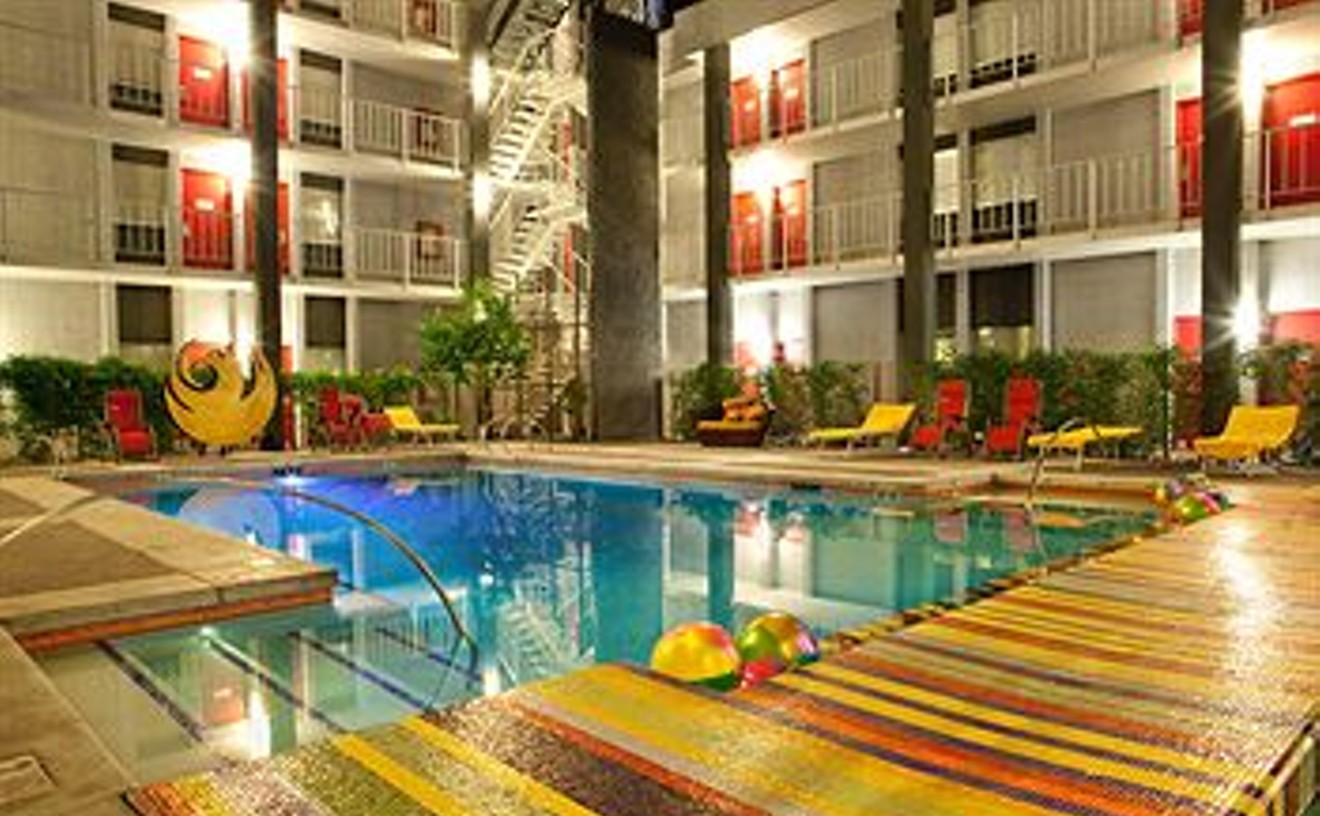 Fair warning: There are no slides, rafts, or lazy rivers at the Clarendon Hotel's Oasis pool. There is, however, a pretty cool waterfall, a killer color palette, and public access — you just have to buy a drink at the bar (and if you've heard anything about the bar at Gallo Blanco, which sits on the first floor of the Clarendon Hotel, you'll order a house margarita or two). The pool's been used as a backdrop for local fashion shows and has been a hotspot for hipster parties and weekend cool-downs. It's a place to be seen — from the hotel rooms that face inward and the hotel's rooftop deck, so just be sure to double-check your coverage before rolling off one of the oversize lounge pads or slipping out of the deep end for a dip in the hot tub. 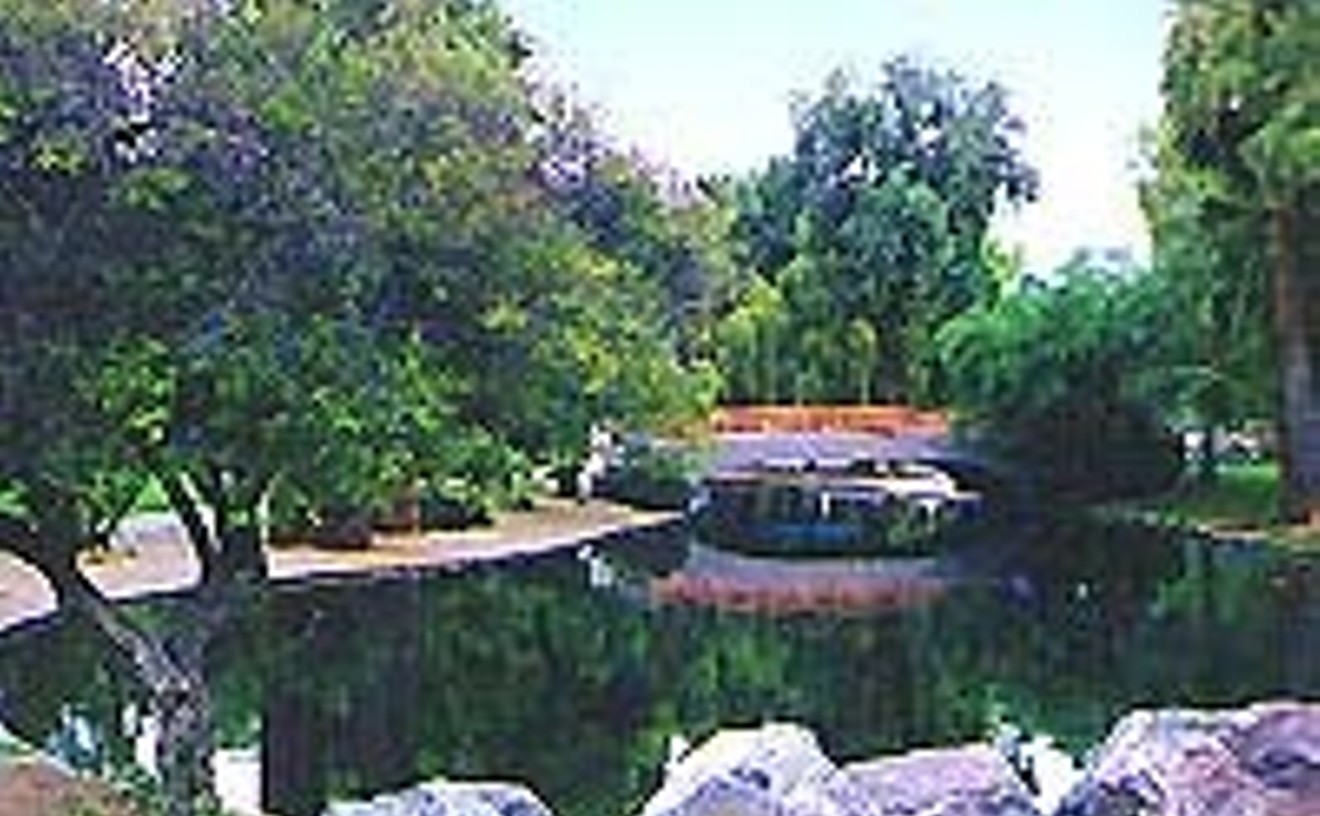 If you're one of the few people in Maricopa County without a swimming pool in your backyard and you don't feel like hitting up one of the dozens of weekly (and ridiculously trendy) hotel pool parties, then you might want to check out Encanto Park's public pool. It may not be the largest or the swankiest pool around, but the price is right, and it sits right in the middle or the Encanto Palmcroft historic neighborhood.

Within Encanto Park's sprawling 222 acres, there also are lighted softball fields, grills for cooking out, a fishing lagoon, and Enchanted Island Amusement Park, with rides for children ages 2 to 10 years old.Dive in! 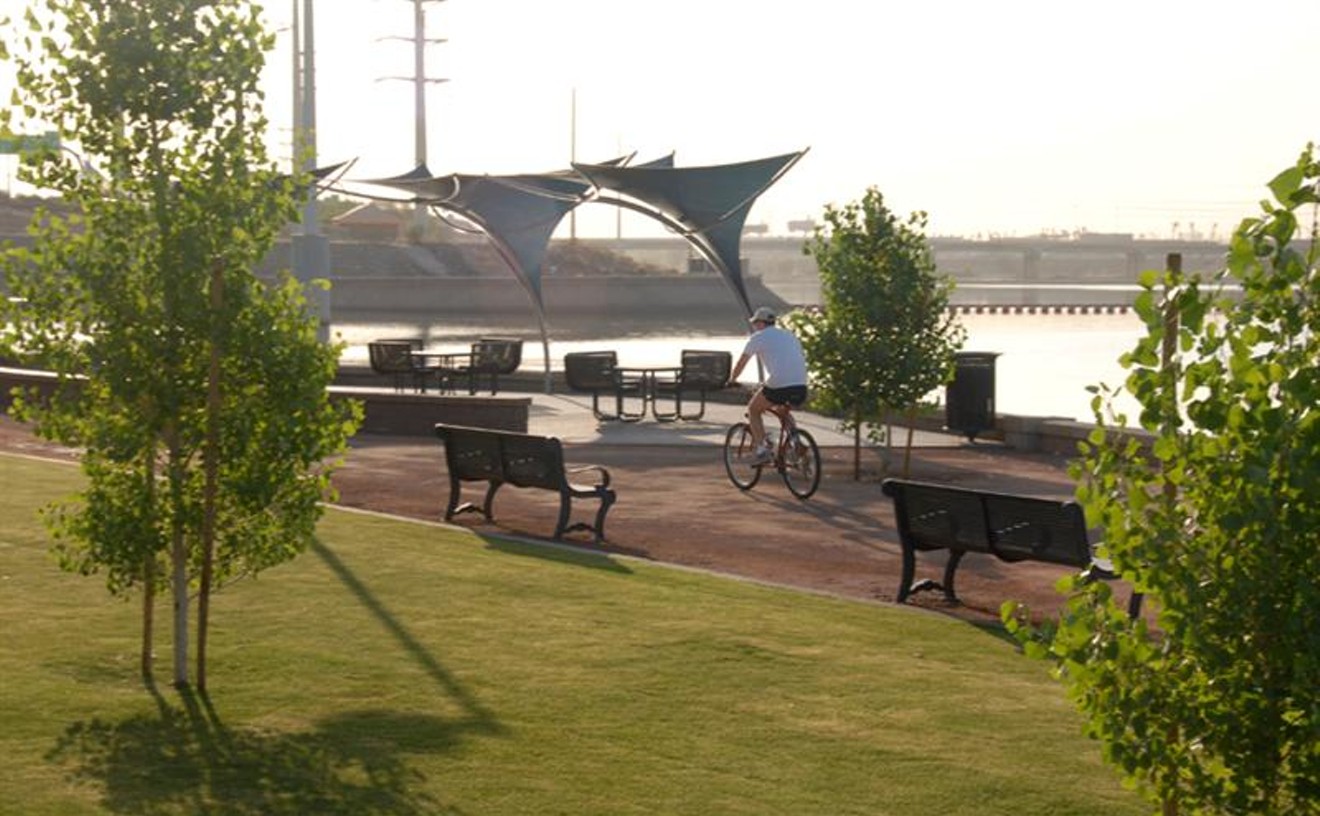 Even looking at Tempe Beach Park's Splash Playground in the off-season, when it's dry and quiet, we get a pang of emotion. Over many summer days when the kids were toddlers, they'd laugh and tread the shallow canals of the park, swim diapers swollen with water. Then they'd cry that they were cold when a slight breeze hit them, even when it was 110, and we'd give them a towel-wrapped hug. As the summers rolled on, they got too big to ride the backs of the water-spouting blue whales. They lost their fear of the thunderclaps and "lightning" on the rainstorm stage — but enjoyed it more. They'd have wars with other kids on the water-shooters, chase each other on the slippery surfaces, and try to act brave if they stubbed a toe. We came less frequently once the kids learned to swim, and only the younger one went to the park last year. But the memories of this simple, magical playground linger long after the end of summer.

Big Surf is a Valley gift that keeps on giving. The two-million-gallon wave pool — the nation's first when it opened in 1969 — is just part of the fun here. The place sports two play areas for little kids stocked with floating islands and mini-slides. At least one of the big-kid slides is steep enough to give us a thrill every single time we take the plunge. Spending half a day at Big Surf can be a real adventure. That is to say that by the end of the day — after we've survived the heat, the crowds and the thrill of the water attractions — we know we had fun but aren't sure it was an entirely pleasant experience. But the kids love it, so off we go.

Some helpful tips to keep the frustration factor low: It's well worth standing in line for 30 minutes before the park opens so you're there early enough to set up lounge chairs in the shade under an umbrella. During a wave, your kid's raft might overturn and float away — watch carefully and you might be able to identify the teen who steals it. Practice your smuggling skills and sneak in snacks and drinks, which are officially prohibited except for those purchased at Big Surf's concession stands. Remember to use sunblock and drink plenty of water. Now you're ready to hang loose. And whatever you do, don't forget the sunscreen.

We can take it. It's true — some parents fear Makutu's: the swarming, screaming chaos of kids running and climbing and gaming for hours. And hours. Adults always want to leave first. But the kids could stay all day — because Makutu's provides the most fun Valley kids can have when it's hot, outside of the swimming pool. Because we're just taller children, we have fun, too — for a while. We'll follow the kids up the dark climbing tower to the overhanging, tunnel-bridges made of webbing that bend our adult feet in painful ways. We help catch them on the zip line. We're behind them on the Banana Slide, which always seems just a little too fast. We give the undersea-themed tunnel feature, which has some truly claustrophobic squeezes for anyone over 5 feet tall, at least one pass-through. Then we let the kids go do everything again and again while we relax by throwing mini-basketballs in the game room. True, we still want to leave before the kids — but only when they're almost as tired as we are.