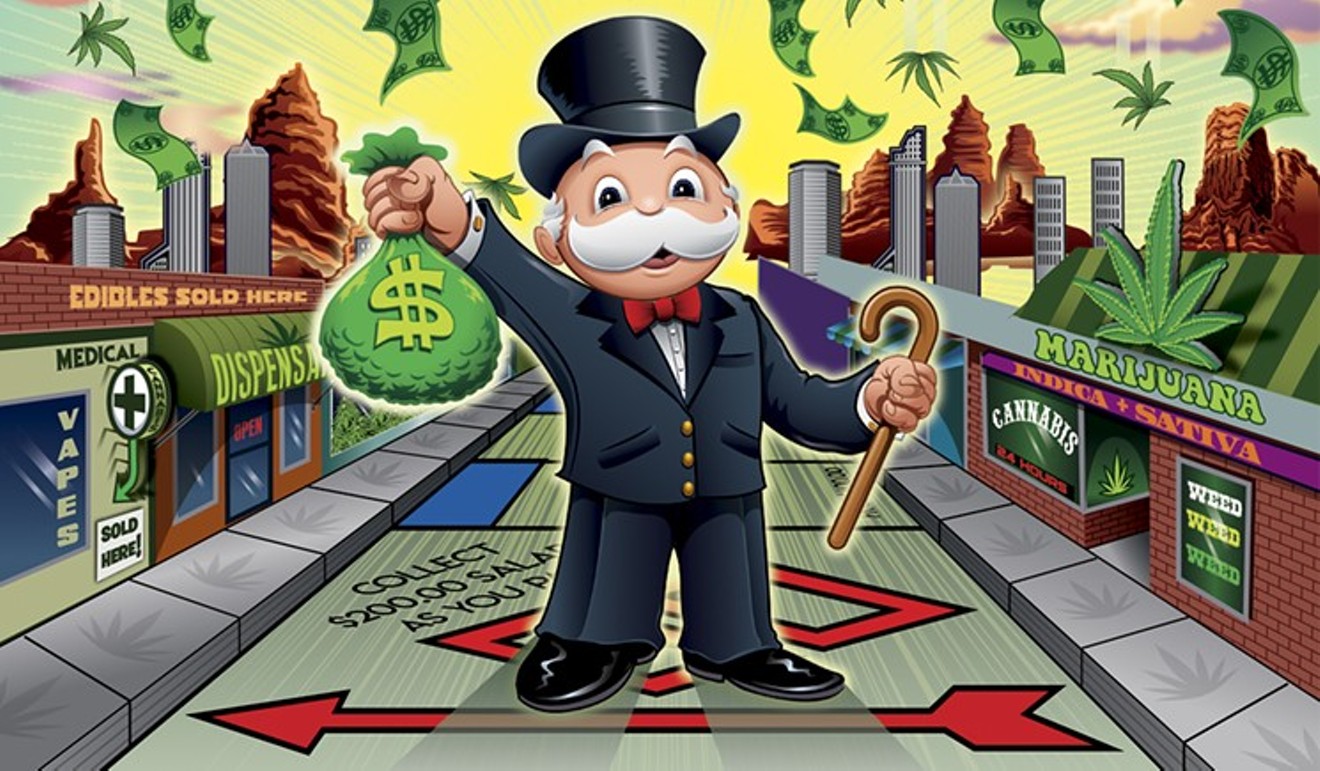 The state is scheduled to give away 26 lucrative "social equity" dispensary licenses on April 8. Phoenix New Times
With less than two weeks remaining before the state of Arizona plans to issue 26 “social equity” cannabis licenses, a new lawsuit over the program could delay the drawing.

The lawsuit was filed last week in Maricopa County Superior Court on behalf of three social equity applicants. It alleges that the Arizona Department of Health Services has not fully vetted the 1,500 applicants in the license lottery, even as the drawing nears.

If the drawing is not pushed back, attorneys argue, then the state might issue social equity licenses that will later be revoked. This, they argue, will jeopardize the social equity program and dilute qualified applicants' chances of winning, because the state would consider a pool of bidders that could include ineligible bidders.

The state agency has not filed a response in court yet.

Attorneys suing DHS are requesting late court intervention, which, so far, the state has avoided in the program's rollout.

Arizona’s social equity dispensary license program has lofty goals. When voters passed a ballot initiative legalizing recreational marijuana in November 2020, they directed the state to create a program to encourage dispensary ownership within communities that were most harmed by onerous laws when pot was illegal.

So far, however, the program has proved divisive. And it has faced multiple lawsuits.

On April 8, the state plans to issue dispensary licenses to 26 lucky applicants in a random drawing. There are 1,500 total applicants in the pool.

To enter the lottery, companies had to show they were owned — 51 percent or more — by an applicant who could show they had been harmed in the war on drugs. To do so, an applicant had to meet requirements involving his or her ZIP code, income level, and proof of old pot charges.

The program has faced criticism, however, for being too easily gamed by industry players. A February investigation by Phoenix New Times found that most applications in the lottery were backed by industry money or investors.

So far, the state has been sued at least twice by advocacy groups that say the rules are unlawful. One of those lawsuits, brought by Acre 41, a cannabis company, and the Greater Phoenix Urban League, a civil rights group, was dismissed. The other is still pending.

But this new lawsuit raises a new concern about the program.

“There could be a lot of people in the random drawing that should not be in the drawing,” said Paul Conant, the Phoenix business attorney who brought the case. “And if one or more of those people is selected, then the department could revoke those licenses.”

Conant’s argument centers around state regulation that prevents anyone from holding a dispensary license if they have certain felony convictions. A violent felony charge, for instance, disqualifies someone from operating a dispensary or holding an establishment license. So does a felony drug offense within the last 10 years, unless it is a pot charge that has been expunged.

Social equity applicants signed attestations that they had clean records. But Conant says the state does not appear to have completed independent background checks on all the applicants to ensure this is true. Such background checks, which are routed through the state’s Department of Public Safety, often take months.

In his work as an attorney, Conant said, he often sees aspiring budtenders forget that they have a disqualifying prior, or simply lie about it on their applications — only to later have their license revoked.

But in this case, it’s not clear what would happen if the state issued a social equity license to someone who later was found to be ineligible.

“There's no remedy in the statute to reissue or have another drawing,” Conant said. It was a real possibility, he said, that Arizona could “end up with fewer than 26 social equity licenses.”

That would be significant, given Arizona’s limited-licensing structure for the cannabis industry. The social equity dispensary licenses are the last of 169 cannabis licenses that will be issued — for the entire state.

That makes each one extremely valuable. Estimates range between $8 million and $15 million, just for the paper value of the license.

The Arizona Department of Health Services says that if licenses are revoked, the agency would eventually reissue them because the number of dispensary licenses is set in state law.

"A drawing open to all would be held to issue an additional license or licenses," said Tom Herrmann, a spokesperson with the Department of Health Services, in response to questions from New Times.

Conant filed the case on behalf of three social equity applicants. He says they face an “unfair” lottery, given that the pool may be larger than it should be.

Unlike other litigation — which has attempted to challenge the rules on the grounds of alleged bias toward large cannabis companies — all three plaintiffs in this case applied with the backing of an investor.

According to filing documents, the three plaintiffs worked with Brachium Prime, LLC, to submit their applications. It’s not clear what arrangement the investor has with the plaintiffs.

That investor worked with 11 applicants in total, sponsoring 22 applications. That's a smaller share than many other investors, some of which backed hundreds of applications in the lottery.

Another case against the licenses could disrupt the rollout as well. A special action complaint filed in November by several social equity applicants is still being considered by a judge in Maricopa County Superior Court.

This case, Black Seed Inc. v. State of Arizona, raised similar arguments as Acre 41’s lawsuit, which was ultimately dismissed. “There is nothing stopping a party that uses one or more straw applicants to obtain any number of the 26 licenses,” attorneys on the case argued.

The case is still pending.

Celeste Rodriguez, a principal at cannabis company Acre 41 and a vocal critic of the state’s program, told New Times in a text message that she was thankful to see the new legal challenge. “I want to see the 26 social equity licenses remain,” she said.

The first hearing in the new case is scheduled for next week — just days before the licenses are scheduled to be awarded.
KEEP PHOENIX NEW TIMES FREE... Since we started Phoenix New Times, it has been defined as the free, independent voice of Phoenix, and we'd like to keep it that way. With local media under siege, it's more important than ever for us to rally support behind funding our local journalism. You can help by participating in our "I Support" program, allowing us to keep offering readers access to our incisive coverage of local news, food and culture with no paywalls.
Make a one-time donation today for as little as $1.