Chelsea Wolfe Is Making Her Heaviest Music Yet 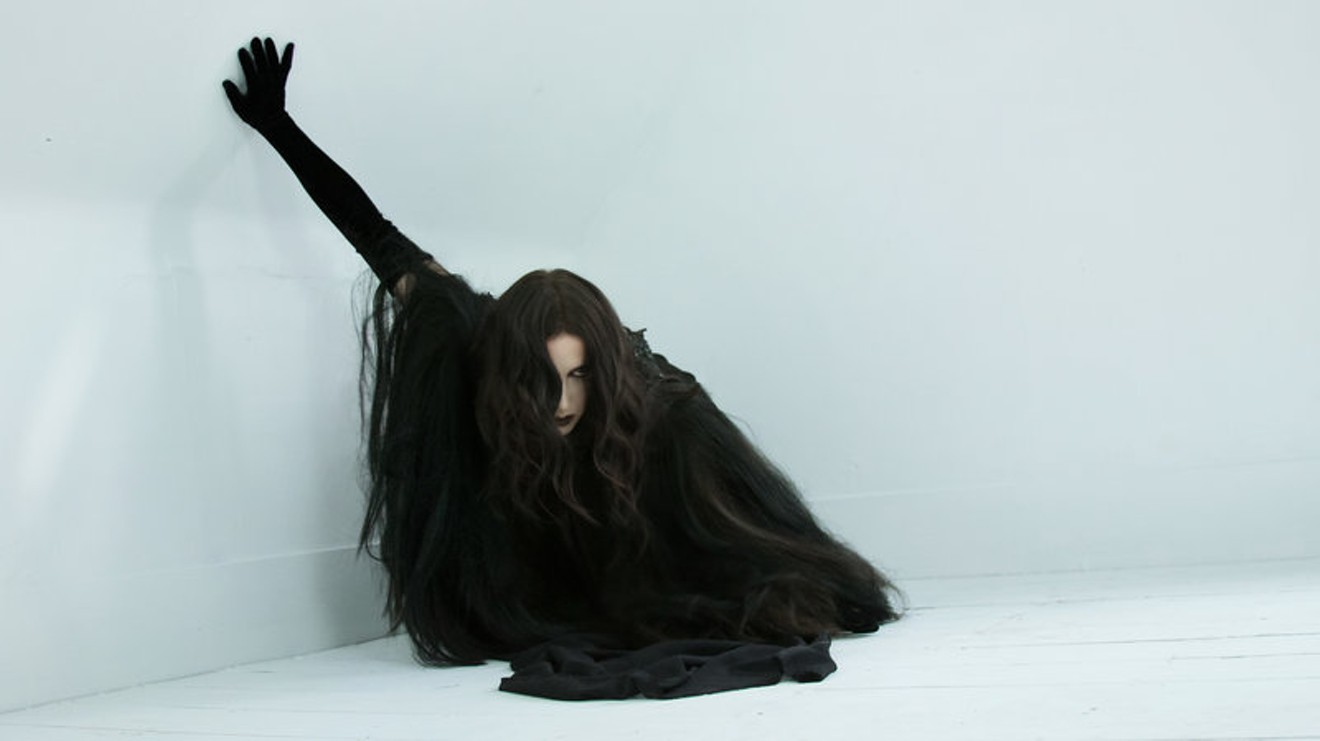 Chelsea Wolfe's heavier than ever. Bill Crisafi
"Grow old and let your hair grow,” Chelsea Wolfe sings on “Color of Blood.” Her voice drifts through a throbbing lattice of bass and guitar fuzz that overlays the song, and it sounds like it could be swallowed up by the noise at any moment.

The track encapsulates the thrill of listening to Wolfe’s music: Her voice is like the little bird that flies into the mouths of crocodiles to clean their teeth. You listen, in part, because you’re waiting to see if the fanged jaws are going to clamp shut and swallow her whole.

While the push-pull of beautiful vocals and heavy sounds on her previous full-length, Abyss, foreshadow the direction the singer has taken on her latest album, Hiss Spun, that line about letting your hair grow out also serves as a bit of foreshadowing.

Throughout most of her career, Wolfe has played with elements of extreme music. She’s the rare singer-songwriter who can weave the atmospherics of black metal or the bottom-heavy pulse of doom into her folk music and have it sound perfectly natural.

Wolfe grew up in the music world. Her father was in a country band and had his own home studio. From the age of 9 onward, the singer wrote and recorded her own music. In 2010, she released her first album, The Grime and the Glow.

It was mostly a spare, folky record, though songs like “Noorus” and “Bounce House Demons” were already flirting with the kind of dense metallic sounds she’d embrace on future releases. Even on her earliest efforts, she had already found her voice: a ghostly, ephemeral presence.

Wolfe sounded like she was haunting her own music — every wail and moan an ectoplasmic melody recorded from the great beyond.

The artist later recorded a cover of Burzum’s “Black Spell of Destruction,” revealing her metal fangirl colors to the world (though she would later disown Burzum for his virulent and racist belief system). She also revealed her interest in the crustier side of punk music, recording an EP of covers by the Lovecraft-obsessed U.K. punk outfit Rudimentary Penii.

Thanks to a a musical partnership with bassist/keyboardist Ben Chisholm, Wolfe’s work has grown sonically harder with each release. While her music still had the kind of airy, gothic beauty that would appeal to Hot Topic shoppers, she and Chisholm began adding harder percussion elements and walls of guitars to create a more layered and volatile sound.

Her affection for the metal world wasn’t one-sided. Wolfe was quickly embraced by some of the most powerful figures in that underworld, where she’s counted heavyweights like Sunn O)))’s Stephen O’Malley, Boris, Swans, and Russian Circles as fans and tourmates. She and Chisholm’s status as metal outsiders-turned-insiders became a fait accompli when the two were invited to take part in a series of collaborative performances dedicated to the band Converge in 2017, playing alongside veteran acts like Neurosis.

All that time spent on the road with so many titans of tinnitus-inducing music clearly rubbed off on Wolfe. Hiss Spun is the heaviest album of her career. It deftly blends her metal influences with her goth-folk melodies to create a beguiling hybrid. Songs like “16 Psyche” keep listeners on their toes with their shifting dynamics. While Wolfe still uses “clean vocals,” she brings in Isis frontman Aaron Turner to deliver throat-shredding lines on “Vex.”

Even though the music is louder and harsher than it’s ever been, Wolfe’s soprano voice has never been more forceful.

On her earlier records, her voice often sounded like it would be devoured by the music. The singer used to struggle with crippling stage fright; when she first started performing regularly, she would often wear a black veil to hide her face. Much of her music was similarly shrouded, like there was a sonic barrier keeping the listener from getting too close to Wolfe. On Hiss Spun the veil is gone, revealing a petrifying beauty.