Review: Paul McCartney Takes Back His Legacy In Downtown Phoenix 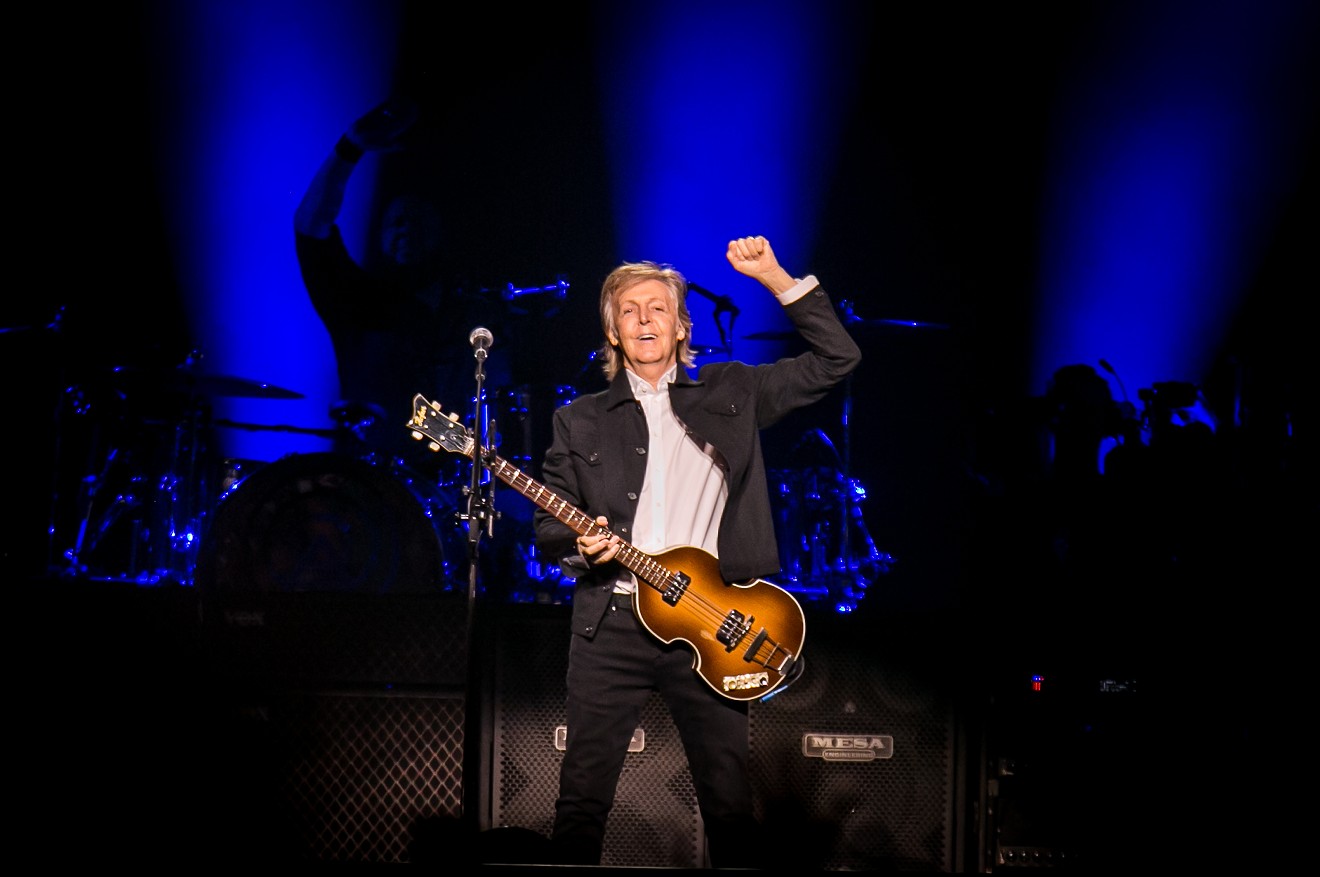 Paul McCartney played “some old songs, some new songs, and some in-between songs" at Talking Stick Resort Arena. Melissa Fossum
The music Paul McCartney has written over the years has been stolen from him in one way or another. The Beatles singer/bassist had the publishing rights to the songs he had written with John Lennon bought out from under him by Michael Jackson. The demos for Band on the Run, his masterpiece with his band Wings, were taken from him at knifepoint when he was recording the album in Nigeria. Charles Manson stole “Helter Skelter” in a way 50 years ago when he and his “family” committed their evil deeds. Even now, the upcoming film Yesterday imagines a world where The Beatles didn’t exist, only to have the one man who remembers them call their songs his own.

Maybe it wasn’t a coincidence, then, that the 77-year-old British knight took the stage at Talking Stick Resort Arena for his Freshen Up Tour dressed in black as if he were about to perform a heist. That unmistakable opening chord to “A Hard Day’s Night” kicked off a nearly three-hour show that had no opening band or intermissions. It was a 38-song marathon that shuffled between “some old songs, some new songs, and some in-between songs.”

If “Letting Go” from the Wings album Venus and Mars is one of the “in-between songs” McCartney described, he sure livened up the bluesy number. A three-piece horn section made its way through the audience to join drummer Abe Laboriel, Jr., keyboardist Paul Wickens, and guitarists Rusty Anderson and Brian Ray onstage. They performed the new songs like “Come On To Me” from the 2018 release Egypt Station with style and vigor, allowing them to slip right into the extensive set list and under the noses of the audience.

“We know which songs you like,” McCartney said later in the show. “When we do an old Beatles song, the place lights up. When we play the new ones, it’s like a black hole. We don’t care. We’re going to play them anyway.”

When McCartney did play those songs he knew would get the crowd going, there was often a story behind it. After performing an extended jam he dedicated to Jimi Hendrix during “Let Me Roll It,” the songwriter reminisced about the time when he met the legendary guitar player in the late '60s. After Sgt. Pepper’s Lonely Hearts Club Band had come out on a Friday, Hendrix learned the song and performed it the following Sunday with McCartney in the audience.

“He was very modest and a fantastic guitar player,” he recalled. 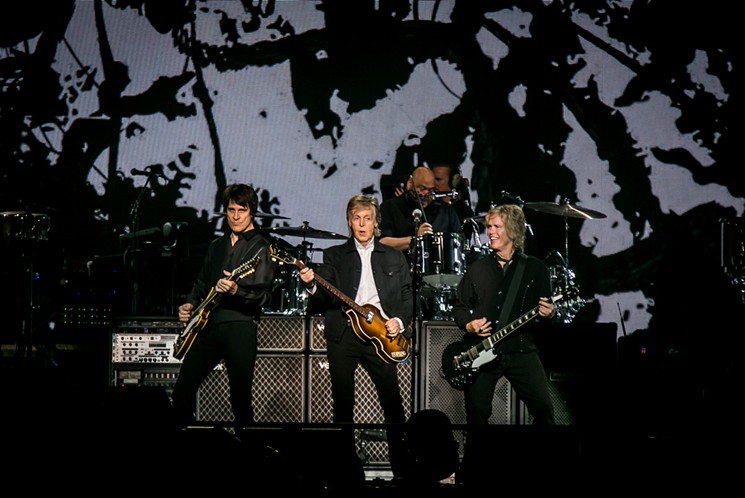 Paul McCartney and his band strike a pose.
Melissa Fossum
These little vignettes helped put McCartney’s extensive catalog in the context that he intended. He performed The Quarrymen's “In Spite of All the Danger,” the first recording by the band that would eventually become The Beatles. He dished on how he came to sing the refrain on “Love Me Do” and performing “Back In the U.S.S.R.” twice in Moscow’s Red Square.

There were also tributes to his old collaborators throughout the show, including a rendition of George Harrison’s “Something” performed on the ukulele his bandmate gave him. McCartney also explained that the Tug of War track “Here Today” was written as a conversation he would never get to have with his old songwriting partner Lennon.

Children today are born with The Beatles ingrained in their brains, so they are likely unaware that “Blackbird” was written at a time when McCartney wanted to give hope to those suffering during the civil rights movement. He has outlived many of his friends and peers, which made these touching attempts to put his legacy back in the proper frame of reference all the more poignant.

McCartney and his band didn't once miss a beat. His voice hit every beautiful note during “Maybe I’m Amazed" and the guitars swooned through the arena on "Band On the Run." There was even an appearance by Natalie Portman and Johnny Depp on the large video screen behind the stage. They sang the ballad “My Valentine” in sign language, which McCartney dedicated to his wife Nancy.

The mood lifted in the concert’s homestretch. Laboriel performed the Macarena behind his drum kit during “Dance Tonight” while McCartney conducted the audience during an extended singalong to “Hey Jude.” Even as an ear-shattering pyrotechnic display took place around him during “Live and Let Die,” the performer didn’t break a sweat. Paul McCartney gave a dazzling show at Talking Stick Resort Arena on June 26, 2019.
Melissa Fossum
For his encore, McCartney took back “Helter Skelter” from Manson in an energetic performance. He sent everyone home with the medley that closes Abbey Road: the lullaby “Golden Slumbers,” “Carry That Weight,” and “The End.”

He may not get those Band On the Run demos or The Beatles' publishing rights back, but McCartney's legacy is safe and secure.

The Crowd: This is a Beatle performing, so practically every demographic was represented.

Overheard: "I can still hear the nervousness in my voice." — McCartney describing his reaction to hearing himself on the recording of "Love Me Do."

Random Notebook Dump: During "Live and Let Die": "This is the Bond title sequence I always wanted!"
KEEP PHOENIX NEW TIMES FREE... Since we started Phoenix New Times, it has been defined as the free, independent voice of Phoenix, and we'd like to keep it that way. With local media under siege, it's more important than ever for us to rally support behind funding our local journalism. You can help by participating in our "I Support" program, allowing us to keep offering readers access to our incisive coverage of local news, food and culture with no paywalls.
Make a one-time donation today for as little as $1.