The first thing you realize during a conversation with Dashboard Confessional's Chris Carrabba is that he's just a great dude.

Soft spoken, but direct and to the point when not getting sidetracked talking about bands he loves, Carrabba, who turns 42 in April, is thoughtful and engaging. In some ways, for one of the reigning kings of emo, this is not surprising, but considering the staggering success Dashboard Confessional (as well as Carrabba's other projects, such as Further Seems Forever) has enjoyed, it would be easy for the singer/guitar player to become jaded. With a slew of gold and platinum records, Dashboard Confessional is one of the more popular bands on the planet, and a huge part of the reason for their appeal is Carrabba.

We caught up from Carrabba as he enjoyed an afternoon off in San Francisco on Thursday before Dashboard Confessional played the Fillmore that night. The band will make its way down the west coast before heading east and Tempe on Wednesday night.

New Times: So where do you call home these days?
I'm from all over because my mom moved us a lot, but when I think about where I'm from, it's Florida. It's where I moved to when I was 16. It was there where I was invited, you know, "Hey, do you play guitar?" and I said, "Well, I have a guitar." There the older guys who told us what to do. They showed us how to do everything. There was always that one older guy who picks a handful of guys and gals and shows them the right records and tells them what guitars to play.

In my case, that was a guy named Dan Bonebrake. He was instrumental in my early career. He was in Dashboard [Confessional] in the very beginning. Before that, he was in one of these bands that compatriots with that first wave of Jimmy Eat World, to pick one from your area. There was nothing that sounded like what Jimmy Eat World sounded like to us. I went to see them seven nights in a row when they toured with Sensefield and Mineral. Dan showed us how that sound was connected to later Agent Orange stuff. It was the beginning of post-hardcore. I love that.

I don't live in just one place anymore. I have ties to Florida, but I live in Tennessee and also have ties to Connecticut. Sorry for the rambling. I've had three cups of coffee.

No worries at all.  I love hearing the stories.
Guys like you and me, we can talk music for hours. Jim [Adkins of Jimmy Eat World] was visiting me last year. I got this sense of, you know, where in the world would we have connected if it wasn't for music? Music is the great equalizer. It's the ultimate ice breaker. It's kind of like a bottomless pit that fuels passionate discourse.

That's so true. I used to use Book Your Own Fucking Life to book tours and I'm still good friends with people I used to correspond with by snail mail.
I just saw a woman, who when we were 15 or 16, she booked some shows for us in Salt Lake [City, Utah] and Denver. In my mind, I was just sleeping on the floor at her parents house. What is amazing is how many people had to, by factors of employment or education or whatever path they were on, kind of back out of the music scene for awhile and now they are back with a fervor. I don't mean bands, I'm talking about people who were booking shows and facilitating the music scene. Did you read Our Band Could Be Your Life [Michael Azzerad] or Get In The Van [Henry Rollins]?

I did. I read them both. I don't think I could put Get In The Van down when I first picked it up.
I remember being like, "This is doable. This is it." I remember reading Get In The Van and saying to myself, "Why not get in the van and do it?" I lived in the Bonebrake brothers' house, and they had that book in their living room and I just devoured it. Years later, we were on tour and I found that book on tape at a truckstop and we listened to it on the road. Henry Rollins in his own voice reading that book is just perfect.

He's amazing.
There's too much knowledge there. I have this theory that he's got recall. When he speaks,  he's pulling from all of his books and from memory. I don't know why we're promoting him, but he's amazing.

We should probably talk about your tour.
Well,  let's segue with this.  I have a lucky shirt I wear every tour. The first show we have that's good, I don't change my clothes from there on out. I tend to travel light. I have show clothes and day clothes. The third show was in New York and I wore a black Black Flag shirt [white bars on black] and those are hard to find. It was stolen from my dressing room as soon as the show was over. Now I have to search the country for another one.

What a drag. That doesn't sound very emo, wearing a Black Flag shirt. What do you think of that term? When I think of emo, the first band that springs to mind Sebadoh.
Yeah. I think of Sebadoh which, remember, that was a shock when Sebadoh came out. You expected it, and it is on a lot of levels as powerful as Dinosaur Jr [band bassist Lou Barlow's pre-Sebadoh group), but there was a clarity of communicating the heart of the lyric that Lou has. Another one for me, at that time, was Mineral and Sunny Day Real Estate. I think they occupied a similar aesthetic. We had so few opportunities to see bands in Florida. Where you guys are, you had better opportunities to see those bands. We used to call it the skipping rock. Bands would skip us all the time.

Me and Amy Fleisher [of Fiddler Records, who put out the early Dashboard Confessional, New Found Glory, and Hot Water Music records] went up to Atlanta to see Jimmy Eat World, Mineral, and Sensefield. I think we followed them all the way to Birmingham because bands just didn't come down to South Florida.

I never really thought about that. It is kind of a dead end for touring bands to go to South Florida.
We used to call it the "dead end" actually.

A lot of metal bands tour down there, though, right?
There was no shortage of metal fans to sell tickets to. I have no idea where we are going with this, but I'm enjoying the conversation. There was no delineation at home from these serious death metal fans, Less Than Jake, Marilyn Manson and the Spooky Kids, a singer/songwriter, and a ska band all playing shows together. It shocked me when I left there and other places weren't like that. That's what we had, so that's what we did. 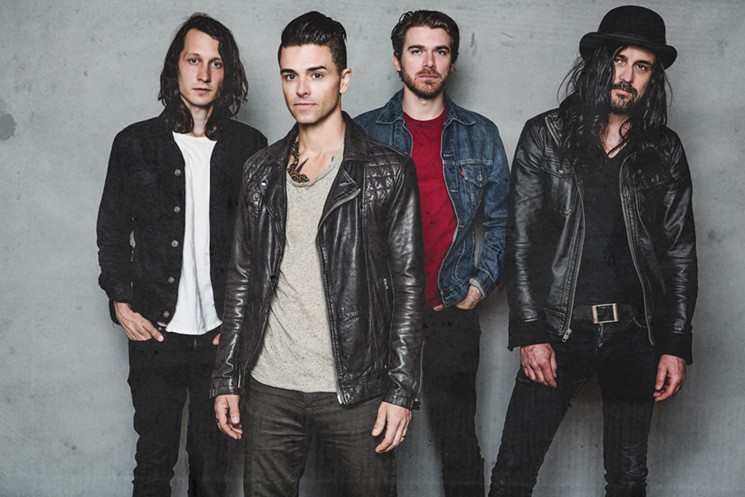 Dashboard Confessional takes the stage on Wednesday, February 8, at the Marquee Theatre.
David Bean
So, last time you came through town, New Times labeled the tour with Taking Back Sunday, "The First Nostalgia Tour for millennials." Any thoughts on that label?
That's an interesting capture. We'll take all comers. It's interesting, ourselves and Taking Back Sunday, we always have an influx of younger fans because of the nature of our earlier releases. We've watched our fans grow up with us. I think there is a kinship I feel with those kinds of people, who go to shows, because of given a choice of anything to do, I'm going to go to a show. That's me.

For a lot of folks, when they think of emo, they think of you, not Sebadoh.
Yeah, that's weird for me, though, but for the same reason that you stated when we talked about Sebadoh because it pre-dates me. But it is what it is. It's borne out of timing and I think somebody aptly assessed that the music is openly emotional, but appropriated a term that pre-dated our band. In the early days, I was a little uncomfortable being called that term because I thought it applied to bands we looked up to. If we are part of that lineage, though, and they influenced us, I'm just going to proud of it. A lot of my peers really don't care for that term [emo].

For me personally, now I identify with the and the Sunny Days as the coolest bands that ever existed. If we call them emo and they call us emo, then I'm proud of it. That's what our fans call us, in a loving way, and if it is good enough for our fans, then what business is it of mine to tell them they are wrong?

We are an emo band and I say that without knowing what one truly is. If you straddle several music scenes and you're speaking evocatively from the heart about things that are true or in language that is useful to conveying emotion as opposed to hiding behind bravado, then you're choosing a path. I chose that path and I'm happy with it.