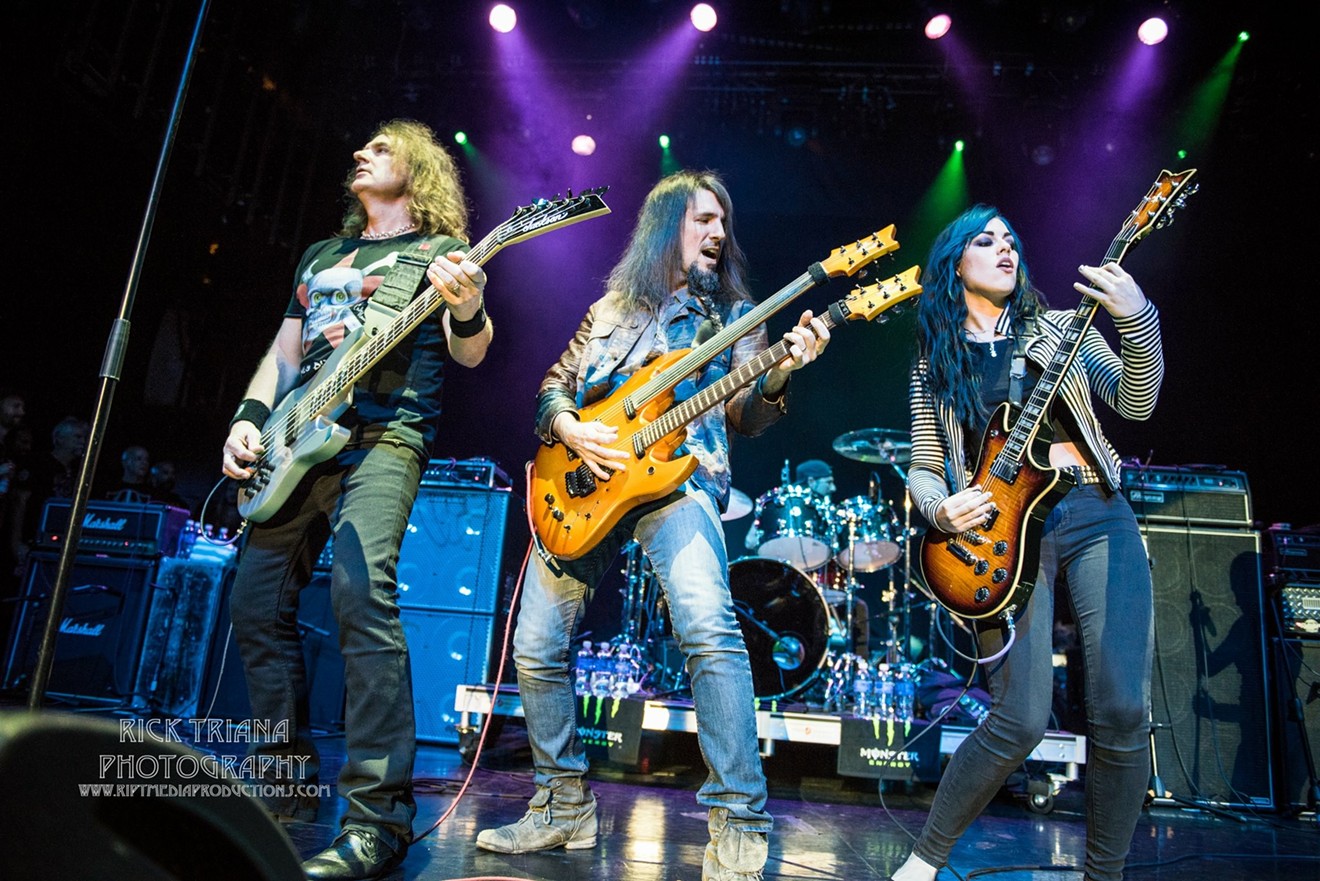 Alex Snowden on stage with Dave Ellefson and Ron "Bumblefoot" Thal Rick Triana Photography
In Pound For The Sound, we get technical with local musicians about what gear they use to create their signature tones.

Alex Snowden of Doll Skin may be a young rocker, but do not let her age deceive you. This talented guitarist already has several tours under her belt, is sponsored by Schecter Guitar Research, has worked and performed with Dave Ellefson (co-founder and bassist of AZ's own Megadeath), and is a founding member of the band Doll Skin, which we called one of the 10 best Phoenix bands under the age of 21 in 2015.

Snowden has amazing tone, technique, and fluidity, with her fingers moving across the fretboard like a spider darting across its web. She has been shredding for quite some time now. I first met her when she was a student at School of Rock in Scottsdale, where Doll Skin was formed. At SOR, she was part of the school's house band, The Sugar Skulls, surrounded by other young elites (and her eventual band members), studying great rock guitarists like Jimmy Page, Pete Townshend, Brian May, and Tony Iommi, playing all the songs note for note with complete ease and natural ability.  For anyone who knows music and what makes musicians great, it's easy to spot those at a young age that really have it, and she has always had it. Even back then, her playing and stage presence were very impressive, to say the least.

Fast forward five years, and Alex, and her are absolutely killing it, doing their own thing, and doing it very well. It seems like nothing but great things lie on the road ahead for her and all the girls of Doll Skin.

With her busy schedule of recording, writing, touring, and still working a day job, New Times was lucky enough to connect with Alex and find out the secrets to her sound.


New Times What's the secret weapon of your sound? And how did that help you find your "signature" tone?

Alex Snowden: My secret weapon, or weapons, are my beloved Schecter Tempests [guitars]. A Custom, Classic, and a Hellraiser Hybrid. My signature tone comes from the heavy low ends and screamin’ highs of these guitars, specifically the Classic and Hellraiser. I really dig the high-bass-even-higher-gain tone from my Blackstar TVP 100 solid state amp, and how it holds up the energy of the guitars. My signature tone definitely relies on this Schecter/Blackstar partnership. All three guitars are so unique in their tones and and are always reliable the power they deliver and the attention they command.

What's your favorite piece of gear in your collection and why?

Currently, my favorite piece of gear would have to be my Hellraiser Hybrid Tempest. I had never been fond of active guitars, but this one is a blast to play. It’s such a sleek guitar, with a smooth, sharp tone to match. EMG pickups provide some unbeatable attack and sustain. Its "ultraviolet" finish shifts from metallic purple and blue, to deep red and black, topped off with glow in the dark fret markers!

It’s hard to pick just one favorite piece of gear because my pedals are just as loved. There are six or seven-ish pedals that make their way on and off my board. The key players here are my Boss Digital Reverb and Harmonist, along with a mini EP Booster, and of course a Classic Crybaby Wah Wah, all of which give me the perfect "extra ' somethin'" when needed.


Any special pieces of gear acquired over the years? Any special story, or stories, behind your collection of tools?

My very first Schecter Tempest was given to me by my friend Dylan. I had never fallen in love with a guitar like I did with that one. Since then, my guitar of choice has been exclusively Tempests. Not too much of a story, but an incredibly fond memory that led the band [Doll Skin] and I to a connection with Schecter Guitars.


On “Let's Be Honest,” how did you go about getting your signature guitar tone on that solo?

When we were recording the song, the engineer we were working with ( to John Aquilino!) helped me to develop this solo after hacking out countless versions of it until it was just right. As far as I remember, it was recorded with my Classic Tempest using the bridge pickup, which gave the solo a sly classic rock guitar vibe. The thick also gives some cool flavor and power to a relatively simple part.

Lady Gaga or Metallica at the Grammys?

I’d probably have to side with Metallica, but Lady Gaga is such a badass! Even through the technical difficulties, this was an iconic collaboration.

What’s on tap for Doll Skin? talks of a new album currently in the works?

Yes! New album! We are wrapping up recording for our sophomore album in the next few weeks, but the whole production is still pretty secretive. Along with the new album, we have a couple tour opportunities still in the works. The band and I are beyond excited about one announcement in particular, but there’s no way I can ruin the surprise just yet! The ladies and I are very pleased with the progress of the new album, and we hope to appeal to a wide range of music lovers with the new tunes. Keep an eye out for upcoming Doll Skin news!