Meet the Musicians Behind Heartstrings Heartstrings at NAMM this past January. Anna Rochelle Imagery
A band called Heartstrings rehearsing on Valentine's Day? No one remarks on the poetic sense of the occasion that day in February, the band's first opportunity to rehearse since playing a set at the National Association of Music Merchants Show (NAMM) in Anaheim, California, and recording an EP's worth of radio-friendly songs with legendary producer Sean Beavan (Nine Inch Nails, Guns N' Roses, No Doubt).

One had to admire the efficiency with which they got ran through their set without taking endless smoking or drinking breaks or gossiping on the phone like most bands get up to. Nope, the only speed bump they encounter as they blow through an eight-song set is when the bass player fumbles on the first tune. Twice.

That bassist is Jared Woosley, onetime lead singer of the Valley band Five Speed. He's now the music coordinator and special program developer at One Step Beyond Institute, part of a comprehensive curriculum that teaches intellectually disabled people how to play and create original music.
While One Step Beyond also has programs such as culinary training, performing arts, fitness and health, life skills, recreation and social activities, its music program's profile has been raised considerably thanks to this advanced band class. Heartstrings have played community events and festivals like Viva PHX with the School of Rock crew and the Special Olympics Over the Edge events.
Each year, One Step Beyond assembles classes of students who are teamed up together by a lottery process. By happenstance, this combination of musicians comprising Heartstrings became a more permanent aggregation.

"Once this band started doing a lot and gelling together, we made a decision to keep them together and for the last four years," Woolsey says. "We took a two-hour block on Friday for the advanced band class."

Now, meet the musicians of Heartstrings. 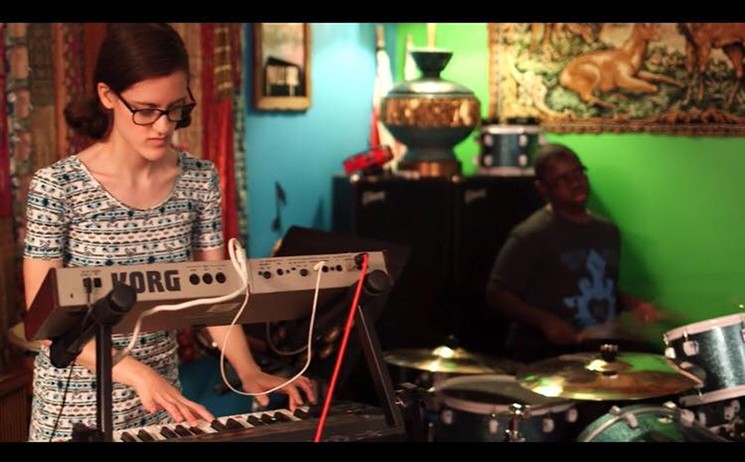 Heartstrings' Christi Bader on synth and Jordan Barbee on drums.
Dallas Street
Jordan Barbee
Drummer
"I started playing when I was 3 years old. I used to bang on pots and pans," Barbee says. "Then my mom gave me a Junior drum kit, and !"

When living in Arkansas, Barbee had formal drum lessons, and in order to join the school band in eighth grade, he had to learn to read music notation. Between eighth and ninth grade, the family relocated to Arizona. After graduating high school in May 2015, Barbee started at One Step Beyond.

Barbee had a strong religious upbringing, and his initial musical heroes were in the genre of gospel music. Beyond that, he likes Sheila E, Calvin Rodgers, Ringo Starr, Earth, Wind & Fire, and Prince. Though autism slowed him down socially, the now-talkative Barbee is clearly making up for lost time. Scruggs says. "His shyness has all but disappeared," Scruggs says. "His personality shines through when he is with the band."
Lance Guimond
Guitarist, singer

Guimond is the most prolific songwriter in Heartstrings. As a young child with autism, his speech was delayed, but he was able to hum songs perfectly before he was able to speak.

Guimond got an acoustic guitar for his 14th birthday and briefly took lessons. But, he confesses, "I procrastinated when I got home and didn't do the lessons. I picked up the basic chords, made some of my own."

That immediately led to writing songs. "Lance began loving '80s rock, and this love inspired him to want to be a rockstar," says his mom, Sarah Khanisho. "He mainly wrote songs about girls that he liked. This really gave him a way to cope with the excitement and heartbreak of falling in love."

Since working with Woolsey, Guimond has learned how to structure a song, use vocal ranges, and employ music terminology.  Lance's musical heroes include Def Leppard, Eddie Van Halen and Slash, and A Flock of Seagulls. "We must have listened to 'I Ran' a thousand times," Khanisho says.

Diagnosed with developmental delay, Bader started playing the keyboard at 6. And according to her mom, Donna Bader, she has "perfect pitch, tempo, and can name any note or key by ear. She started writing music on the computer eight years ago and was a something of a musical loner." That was before she joined Heartstrings.

"I've played piano since I was a child, so we had a piano and an electric keyboard in the house and the keyboard was in the same room as Christi's toys," her mom says. "One day, when she was 6, I walked by the room and heard her playing a classical piece on the keyboard that I'd played on the piano. This was the first time I realized she could play by ear. Since then she had been continued playing and eventually, began composing."

Woosley adds that Bader composes everything from pop music to extended classical pieces. She has hard drives of music, and she composed a song about the NAMM trip.

Of the four bandmates, Thorpe has had the most severe challenges. He was only one pound, two ounces when he was born and wasn't expected to live. Growing up blind and intellectually disabled, he didn't speak until he was 8 or 9. His mother, Danyale Strickler, had the task of busing him to the Arizona State School for the Deaf and Blind in Tucson while she remained in Phoenix.

"After a few weeks, he started to love going. And that's when the whole music thing opened up for him. He always loved music; it would calm him down," Strickler says.

Thorpe aged out of the Tucson school when he was 21 and found his way to One Step Beyond. Musically, he goes from Guns N' Roses and Drowning Pool to Bob Seger and The Beatles. “He loves 'Hey Jude,'" Woolsey says. "When he wanted to do 'Hey Jude' for One Step Beyond's 10th-anniversary show, he figured it out after hearing it twice. But even though it starts on piano, he prefers playing it on the organ."

"Ten years ago was a rough time for me," says Woosley. That's when he was the lead singer for Peoria band Five-Speed, who signed to Virgin Records, played Vans Warped Tour, and, in short, lived the dream. Until they weren't.

"I went from having the greatest job in the world playing in a band to having it end with a blink of an eye," he says. "I thought I’d never find a job I loved as much as that ever again. These days, I look back on those years like I was in training for what it is I think I was really meant to do."

When Woosley applied to the then-new One Step Beyond, he says the program was very small, with maybe 30 participants. "When they found out I came from a music background, they asked me if I would incorporate music into the participants' daily activities," Woosley says. "The very second parents started hearing about me teaching a music class was when the donations started flooding in. We received so much music gear at that time that they had to dedicate an entire room for all the equipment."


If Woosley's past life connections can make things like that recording session with Sean Beavan happen, it's the band's readiness to deliver the goods that carries the day. Rather fortuitously, Dallas  hired on to film one of the program's theater performances five years ago. He's been documenting the group's progress ever since.

"After Dallas experienced it, he was hooked," Woosley says. "Right from the beginning, Dallas started focusing on a certain group of musicians who eventually became The Heartstrings Band. He saw the magic with his own eyes and I knew he was in for the long haul. What I didn’t know was that Dallas has a young son with autism. I know Dallas feels that by capturing on camera the benefits of programs like these, he is shedding light on what is so important to so many."

What truly makes any band is not so much musical prowess, but how each person works together to create something bigger.

Guimond doesn't do piercing and bending solos like his guitar heroes, but he writes melodic ones that fit what Heartstrings are doing. No one here is a flashy soloist, but they've structured a repertoire where that kind of playing wouldn't work.

When you think of all-time greatest bands, the players aren't interchangeable. That would tear at the fabric of who those bands are.

And Heartstrings are a careful, considerate band who sing songs more heartfelt than most of what passes as Top 40 now.

Some of the evocative songs the band recently recorded in L.A. include "Never Wants Me," which combines '80s balladry with an emo-centric melody and a straightforwardness in the lyrical department that you'd never hear in either of those genres.

Guimond doesn't chase any labored metaphors. He sings the painful facts: "She doesn't want me to hang around! She doesn't need me to stick around - NO!"

In fact, most of the band's music seems roosted in an '80s to early '90s sensibility, the last golden era for rock bands. Drummer Barbee attaches a Larry Mullen-style wallop on what you might imagine as mid-period U2 forays into blue-eyed soul on "Where's Your Woman," which Thorpe and Bader decorate with underpinning organ and that spooky Dr. Dre Korg sound, respectively.

On the other side of the mood spectrum, the reggae-tinged "More of the Glorious" offers the sort of jollity that might tempt Sebastian the Crab to resurface.

"I like to make songs sound different," Guimond says. "There are bands I really like, but every song has the same beat and rhythm, and I like to change it up a bit."

While Woosley anchors the songs with his bass-playing for many of the One Step Beyond classes where guitars are in open tunings for students who haven't played before, he's acting more like a de facto producer and sounding board for Heartstrings.

Although always encouraging, he sometimes has to ask the group to reconsider a lyrical choice that wouldn't go over well with their audience. Like the time Guimond came in with a risque song titled "Zucchini Bikini." Or when Barbee was writing a song with Bader: "Lance was rapping over it but it had a curse word and we have to keep it PG."

"We dropped one 'S.O.B.' in there," Guimond sheepishly admits.

Heartstrings are scheduled to perform at the Abilities United Music Festival on Friday, April 20, at Theater Works in Peoria.