Your Guide to M3F 2022: Tickets, Schedule, After-Parties, and More 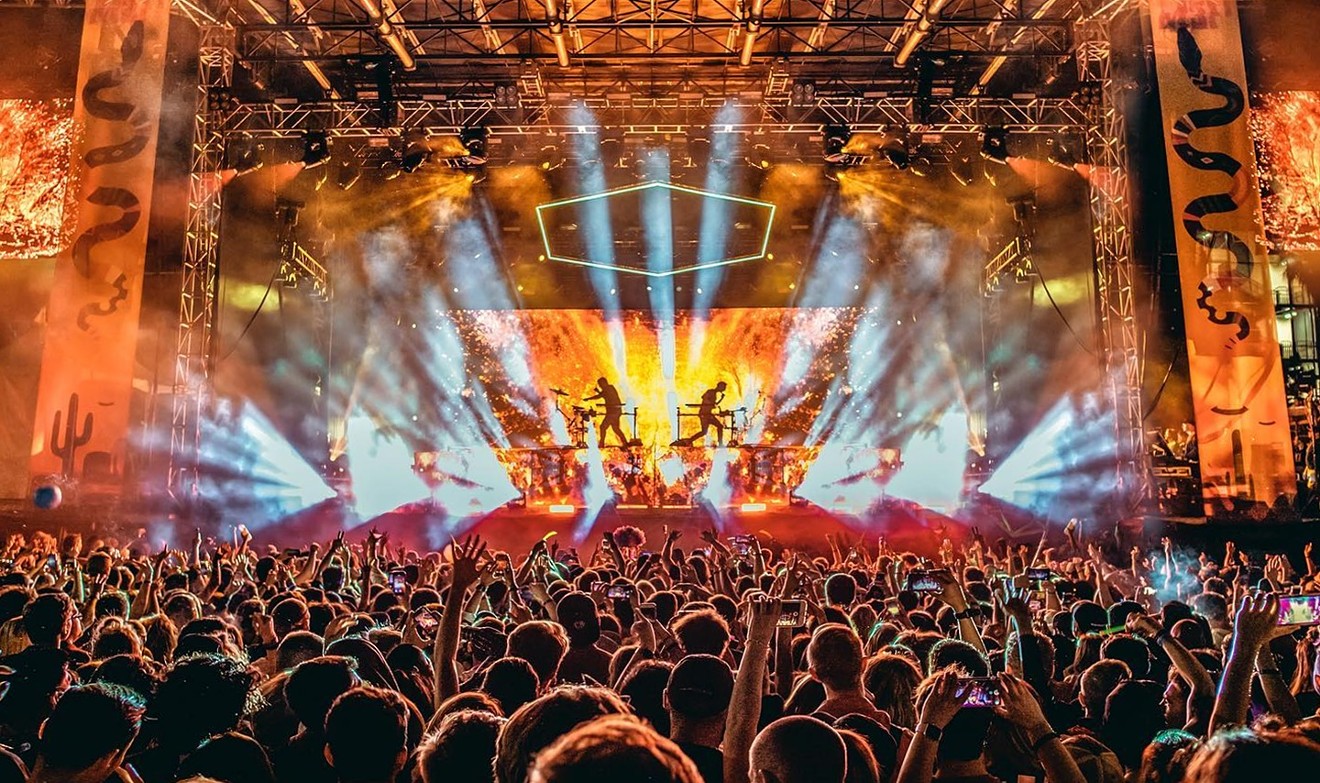 One of the scenes at M3F in 2020. M3F
When M3F last took place in 2020, the local and worldwide concert scenes were days away from shutting down. The springtime event held every March in downtown Phoenix was the last major music festival to happen in the Valley before the COVID-19 pandemic put life on lockdown for months.

After a two-year absence, M3F’s fans are ready for its return.

They won’t have to wait much longer, as the festival’s 2022 edition takes place this weekend. The two-day, three-stage event at Margaret T. Hance Park is happening on Friday, March 4, and Saturday, March 5, and despite some small changes (this year’s event is only two days instead of three) it's offering the same sort of sounds and vibes.

What else is planned for M3F 2022? Check out our extensive guide to the festival, which features everything you’ll need to know before attending.

When and Where Is the Festival?

General admission, which just gets you into the festival, is currently $85 per day and $145 for both. M3F is also offering “VIP+” tickets, which are $275 each day or $410 for the weekend. Both options include access to the VIP section, private restrooms, better seating, premium views of the main stage, complimentary massages. You’ll also get a $100 credit good towards purchasing food and drinks in the VIP section. (Note: Tickets are non-refundable and all prices listed do not include service fees.)

Does M3F Have Age Limits?

Absolutely not. The festival is open to all ages and kids 10 and under can attend for free with a paid adult. (Consider bringing along ear protection for your brood since the music can get pretty loud.) A special “kids zone” will also be available and feature family-friendly arts, crafts, and interactive activities.

It’s going to be pretty nice festival weather, actually. There will be partly cloudy skies both days with temperatures in the low- to mid-70s during the daytime. It will get down into the 60s in the evenings, so a light jacket, hoodie, or sweatshirt isn't a bad idea. 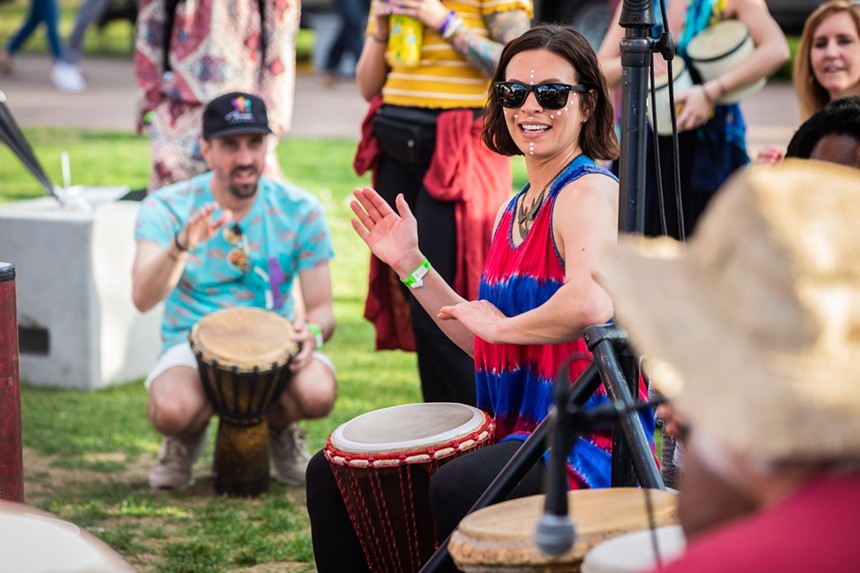 Stick with the Valley Metro light rail. Rides are free for anyone wearing an M3F wristband and there are stations along Central Avenue at McDowell Road and Roosevelt Street that are mere blocks away from Hance Park. Ride-sharing services like Lyft and Uber are also an option.

If you’re coming by train, Valley Metro operates free park-and-ride lots along the light rail route. If you’re driving to the festival, the streets adjacent to Hance Park will be blocked off during M3F’s run and the city of Phoenix will be on the lookout for illegal parking.

The downtown Phoenix area has thousands of parking spaces within walking distance which are metered daily from 8 a.m. to 10 p.m. and cost $1 to $1.50 per hour. (You can use this site to reserve spots.) Dozens of parking structures are also available throughout downtown and are anywhere from $20 to $60 per day. A bicycle valet service will be available near the main entrance at Second and Portland streets.

Will There Be Wristbands?

Yes. Most big music festivals have them these days and M3F is no exception. Everyone in attendance will be required to wear one at all times and it's the only way you’ll get into the event (printed or digital tickets won’t be accepted). An RFID tab is attached and will be scanned upon entry or when making purchases at M3F.

Attendees are asked to register and activate their wristbands before traveling to the festival, as well as link a credit or debit card through a digital billfold portal. Details on how to do so (as well as where and when wristbands can be picked up) will also be sent via e-mail.

Two things to keep in mind, though: Be careful when tightening the wristband (since it's almost impossible to loosen or remove without damaging it once cinched) and keep it safe since there’s a $25 replacement fee if it's damaged. (New wristbands can be obtained from the onsite box office with ID).

What Will Security and Getting Into the Festival Be Like?

The main entrance to M3F will be located on First Street between Moreland and Portland streets. Meanwhile, the VIP entrance will be north of the Phoenix Center for the Arts, 1202 North Third Street.
Security will conduct bag checks. Attendees are “strongly encouraged” to bring clear bags to speed up the process of getting into the festival.

Will Re-entry to the Festival Be Allowed? 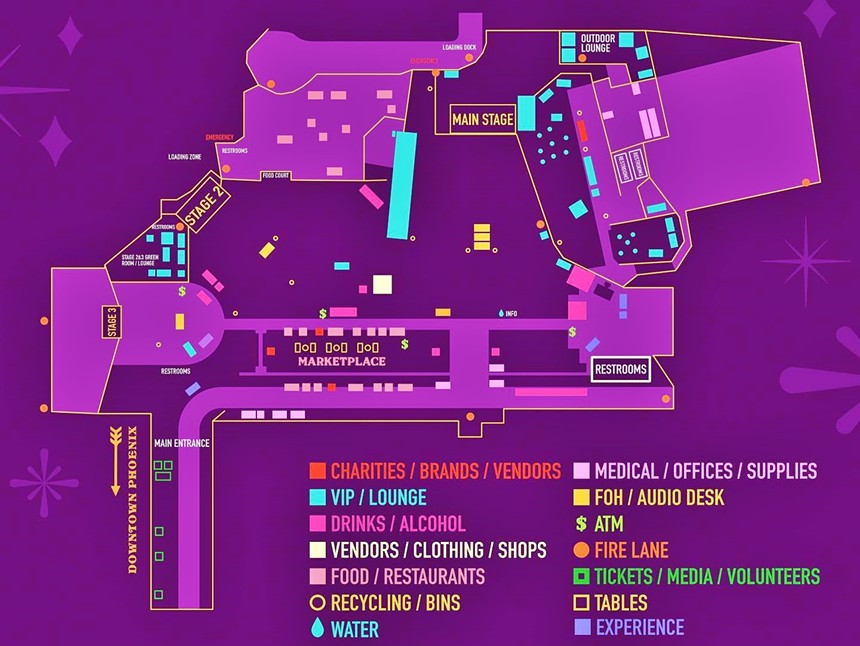 A map of the festival's layout (click the upper right corner to enlarge).
M3F

Masks and COVID-19 vaccinations are recommended, but are not required by M3F’s promoters to attend, nor is a recent negative test result. According to the festival’s website, attendees “voluntarily assume all risk associated with COVID-19.” Anyone experiencing a fever, cough, or other COVID-19 symptoms is asked to not attend.

Social distancing will be encouraged at the event, there will be an increased amount of hand sanitizer stations onsite, and crews will frequently clean high-touch areas and surfaces.

What Is M3F’s Food and Drink Situation Going to Be Like?

Various food trucks, vendors, and local restaurants will be set up along the south side of the festival grounds and inside the VIP areas. As with previous editions of M3F, options for meat-eaters, vegetarians, vegans, and those seeking gluten-free cuisine will be available. Soft drinks, water, and adult beverages can also be purchased at vendor booths and bars throughout the festival.

There will also be a beer garden onsite offering curated craft beer tastings. Attendees who are 21-and-over will get three refills of each beer from 1:30 to 3:30 p.m. Space is very limited, though, and tickets are $50 per person, per day.

Where Can I Get Water?

What Else Is There to Do At M3F?

Festival attendees can also participate in the daily drum circles, a longtime hallmark of M3F, and play bongos and other percussive musical instruments. Yoga classes will also take place from 2 to 3 p.m. and 4 to 5 p.m. on Friday, as well as from 1:30 to 2:30 p.m. and 4 to 5 p.m. on Saturday. And vendors will be set up along the south side of the festival grounds and sell clothing, merch, art, and other items. (Local charities will also be at the event.) Electropop band A R I Z O N A are scheduled to perform on Friday, March 4, at M3F 2022.
Christian Lanza

Sets will begin 30 minutes after gates open on Friday, March 4, and immediately on Saturday, March 5. Will There Be Official After-Parties This Year?

Yes. Walter Where?House, 702 North 21st Avenue, will host the official after-party on Friday starting at 10 p.m. Jungle and Franc Moody will perform DJ sets until the wee hours. Tickets are $30 per person. Saturday night’s after-party will take place at The Churchill, 901 North First Street, and include DJ sets from Blu DeTiger, Nick van Hofwegen of Young & Sick, and Joshy Soul. Admission is $15 Doors for both events will open at 10 p.m. All proceeds will benefit Backline.care, a nonprofit connecting music industry professionals with mental health and wellness resources.

You’ll want to have the basics for attending any outdoor festival, such as a fully charged smartphone, comfortable footwear, bags and non-framed backpacks, sun protection, and a government-issued ID. Umbrellas and low-backed chairs will be allowed, but can only be used in designated areas only. Picnic blankets, hula-hoops (including those of the LED variety), and selfie-sticks are also permitted. And M3F’s promoters are not only cool with you wearing costumes or having festival totems, they’re encouraging them to be “funny,” “crazy,” and “colorful.”

What Shouldn’t I Bring?

Leave your weapons, drones, illegal substances, or laser pens at home (not to mention any drug-using drones armed with lasers and weaponry). Outside food and drinks, ice chests, professional photo or video equipment, pets (except for licensed service animals) also aren’t allowed into the festival.
KEEP PHOENIX NEW TIMES FREE... Since we started Phoenix New Times, it has been defined as the free, independent voice of Phoenix, and we'd like to keep it that way. With local media under siege, it's more important than ever for us to rally support behind funding our local journalism. You can help by participating in our "I Support" program, allowing us to keep offering readers access to our incisive coverage of local news, food and culture with no paywalls.
Make a one-time donation today for as little as $1.