An attendee of the Phoenix Lights music festival in 2019. Benjamin Leatherman
Here’s a rundown of recent news from the metro Phoenix music scene, including details about a popular electronic dance music festival being postponed, a local music legend getting his portrait added to a memorial mural, and recent concert announcements.

Looks like locals will have to wait another year to have a close encounter with extraterrestrials and electronic dance music. Local promoter Relentless Beats announced recently it's postponing the 2021 edition of its annual Phoenix Lights music festival, which was scheduled for April 2 and 3 near Rawhide in Chandler.

A statement by the company announcing the news read: “While we are nearing the return of live music, April 2021 is too soon to hold Phoenix Lights in its true and intended format. Phoenix Lights is an electric experience only possible with the full crowd’s energy and the texture of an explorable festival site. That is how we want Phoenix Lights to be remembered now and for years to come.”

It’s the second time Relentless Beats has postponed the festival. The company, which has staged several socially distanced events like drive-in festivals and “pod concerts” over the past year, also ruled out the possibility of putting on the festival with this format. “It does not make sense for us to transform Phoenix Lights into a drive-in or pod concert experience at this time,” the company’s statement said.

Relentless Beats also stated that tickets purchased for the 2021 festival will be valid for the rescheduled dates, which will be announced later this year. Anyone who’d like to request a refund can e-mail [email protected] for assistance.

Chicago-based rapper Lil Durk, best known for his hit singles "Like Me" and "My Beyoncé,” will perform an outdoor concert on Saturday, April 17, in the parking lot of Celebrity Theatre. The all-ages event, which has been dubbed “Smurkchella,” will feature audience members seated in chairs at all times. Other COVID-19 safety measures will be used during the concert. The show starts at 6 p.m. Early bird tickets are $75, general admission is $100, preferred seating is $150, and front row tickets are $300. More details can be found here. 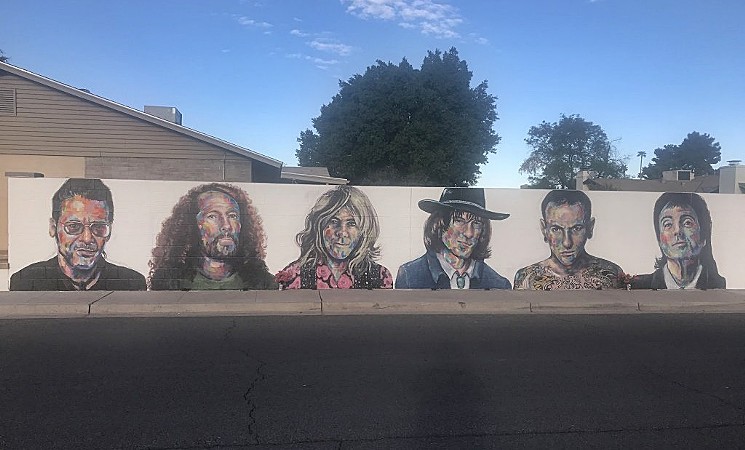 The Valley Rockstar Mural in Tempe, which now includes a portrait of the late Lawrence Zubia.
Tommy Gwinn

A portrait of Lawrence Zubia, the late guitarist/vocalist and frontman for the Pistoleros, has been added to the Valley Rockstar Memorial, a popular mural in Tempe honoring deceased local musicians. According to Tommy Gwinn, who hosts the popular mural on the concrete fence of his Tempe home at 1992 East Richards Drive in Tempe, artist Gina Ribaudo completed her painting of Zubia on March 2.

Local concert promoter Psyko Steve Presents has announced new dates for a pair of upcoming gigs. A show by southern California-based stoner rock band Fu Manchu, which was originally set for March 8 at The Rebel Lounge, has been rescheduled for Monday, March 14, 2022. Meanwhile, a show by indie pop/emo rock artist NateWantsToBattle at Crescent Ballroom that was originally taking place on March 26 has been moved to Tuesday, August 24. All tickets originally purchased for both concerts will be honored.
KEEP PHOENIX NEW TIMES FREE... Since we started Phoenix New Times, it has been defined as the free, independent voice of Phoenix, and we'd like to keep it that way. With local media under siege, it's more important than ever for us to rally support behind funding our local journalism. You can help by participating in our "I Support" program, allowing us to keep offering readers access to our incisive coverage of local news, food and culture with no paywalls.
Make a one-time donation today for as little as $1.