Mary J. Blige is scheduled to perform on Saturday, August 10, at Ak-Chin Pavilion. Live Nation
What’s on tap for the Valley’s concert scene this weekend? A mix of electronic dance music and hip-hop, for starters. Rappers and DJs will dominate local venues from Friday, August 9, to Sunday, August 11.

Nas, Talib Kweli, Mary J. Blige, Kurupt, and Devin the Dude are all scheduled to perform around town the next few nights, as are EDM purveyors like Louis the Child, Thugfucker, Ansome, and Myler.

Other notable shows this weekend include local bands decker. and Banana Gun celebrating a decade of existence, Young the Giant and Fitz and The Tantrums bringing their team-up tour to downtown Phoenix, and 311 and Dirty Heads doing their thing at Ak-Chin Pavilion.

Details about each of these gigs can be found below. And for even more music events happening around the Valley, hit up Phoenix New Times' online concert calendar.

Despite being a critically acclaimed rapper, Devin the Dude has not experienced much mainstream success. His peculiar flow has landed him guest appearances alongside the likes of Ice Cube, Too $hort, Dr. Dre, Snoop Dogg, and Jay-Z, but the respect of his peers just hasn't resulted in album sales. That's unfortunate for the Michigan-born transplant, but the silver lining – for fans, anyway – is that Devin remains an approachable figure in the hip-hop world. He’ll perform at Aura Nightclub in Tempe on Friday night. Fans of lyrically driven hip-hop should celebrate the opportunity to see and hear this oddball up close and personal. The gig gets going at 9 p.m. Tickets are $15 to $40. Matthew Keever

Banda music is lively and loud, normally featuring a brilliant horn section, large bass drum, and a few clarinets. The music is both simple in its composition and complex in its delivery – imagine the amount of practice it takes a normal-sized band to sync up and play as a team. It takes time and patience, for sure. Now imagine if your band has 16 members.

That's what we get with La Banda Sinaloense MS de Sergio Lizarraga, or simply Banda MS. The group was formed in 2003 in the Pacific state of Sinaloa, specifically in the city of Mazatlán. Their style of music is called Duranguense, which runs at a faster tempo than traditional banda music, yet still shares roots with Norteño. Their sets include such classics as "El Sinalonse," which is pretty much the standard banda song that every group learns and perfects. The blaring of the horns, the vocal fortitude of the lyrics, and the bang-bang-banging of the drums instantly heart rates and causes boots to shuffle. And shuffle they will when Banda MS performs at Comerica Theatre on Friday night starting at 8:30 p.m. Tickets are $62.50 to $182.50. Marco Torres

Like techno? You’ll want to head for Tempe’s One One Bar for an evening of beats and bass from forward-thinking and cutting-edge DJ/producers Ansome and Myler. Both hail from the U.K., and prefer a harder, faster, and stronger style of techno mixed with other electronic music genres (Myler’s work, for instance, occasionally features elements of drum 'n’ bass). DJ Aisle 5 will open the evening, which is being presented by local EDM collective Techno Snobs. Soak up the sounds starting at 9 p.m. Tickets are $20 to $30. Benjamin Leatherman

Banana Gun celebrate a decade together at Crescent on Friday. Kevin Loyd is the one in the dreadlocks.
Julie Breslin

It’s rare to find a local band that the stamina to stay together for a decade, but Banana Gun most bands. Despite their ups and downs over the years, the five-piece, which include vocalist Loyd, saxophonist Kyle Parks, bassist Ross Troost, drummer Ian Breslin, and guitarist Nic Dehaan, the family that play together. They do it well. Their fun and frantic live sets are jam-packed with jazzy, danceable riffs. The Phoenix band's latest album, 2017’s Dance Monkey Down in Faux Town, is their best work yet.

To commemorate their milestone, Banana Gun embarking on a mini-tour through Arizona this weekend with decker., who also started in 2009. They stop at Crescent Ballroom on Friday night. Wyves and Ali A and the Agency will open the evening, which starts at 8 p.m. Admission is $10. Jason Keil

If you plan to see Mary J. Blige and Nas on The Royalty Tour, don't be late. There isn't going to be an opening act. The ‘90s legends won't have separate sets either, so don't bother asking who goes on first. Rather, they will tag-team each other throughout the evening to perform their solo hits and share the stage for their joint work. What makes this onstage pairing particularly noteworthy is both Blige and Nas are celebrating the 25th anniversaries of their landmark albums My Life and Illmatic, respectively. The two performers aren't holding back either. Media outlets have reported that the duo have a setlist that is over 40 songs long, including the hits "No More Drama" and "The World is Yours." This isn't a co-headlining tour. It’s a night of collaboration. Tickets are $30.99 to $179.99 for the show, which starts at 8 p.m. Jason Keil 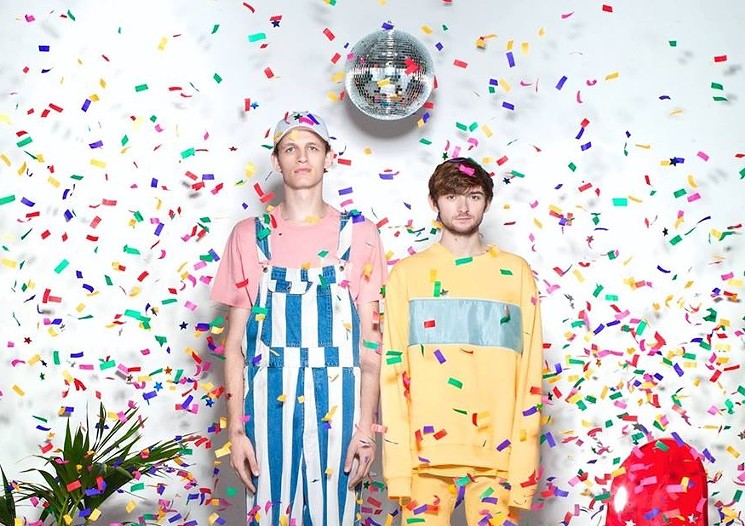 Saturday, August 10
The Pool at Talking Stick Resort in Scottsdale

EDM – or electronic dance music for those asleep the last half-decade – is all but on the way out. After several feverish summers of megaton festivals and figureheads like Deadmau5, the genre is more or less teetering on its last legs. But don’t tell that to EDM duo Louis the Child, whose subtle variations on the EDM formula suggest the euphoric dance style isn’t dying but finally maturing and evolving.

Trading anthemic builds for pop-savvy, hip-hop percussion and fluttering, neon-drenched synths, Louis the Child’s singles float more than erupt. Amid glassy keys and sensual, party-ready moods, the duo show what a sea change might look like for EDM — and how much fun surfing those waves could be. This weekend, Louis the Child bring their Playground to Talking Stick Resort in Scottsdale to headline the latest Release pool party. Whethan, Win and Woo, , and Rampant will also perform. Gates open at 1 p.m. Tickets are $40. Jonathan Patrick

The Lunchbox is the new haven for drum 'n' bass in the Valley.
Benjamin Leatherman

Local fans of electronic music rejoice. ICYMI, local DIY venue The Lunchbox recently was saved from impending doom by the timely intervention of local experimental electronic musician Scot McKenzie and a few of his friends. In addition to helping out owner Danny Levie on the financial end, they also installed a new sound system, and it will definitely get a workout during any of the upcoming electronica and EDM events happening at the venue.

That includes the Melt drum 'n’ bass/junglism nights that have taken place at LBX over the past several months, which feature local and visiting DJs and producers. And according to the event’s curator, Deaconblue Batchelor, there are about to be a lot more Melts going down at Lunchbox. “It's been building and going really well,” Batchelor says, "so well that Danny asked us to bump it up to two nights a month.”

Hence Melt v2.1 on Saturday, which is the first of two editions of the night this month. It features famed local selector Deepfreq as the headliner. Other artists scheduled to perform include and the DJ foursome known as the BoomTunePlatoon – which consists of Damad Monk, Quadlift, Xplicit, and – who will present a two-hour jungle set. The action starts at 9 p.m. Admission is $5. Benjamin Leatherman