Jonas Brothers Bounce Back With a Deluxe Dance Party in Phoenix 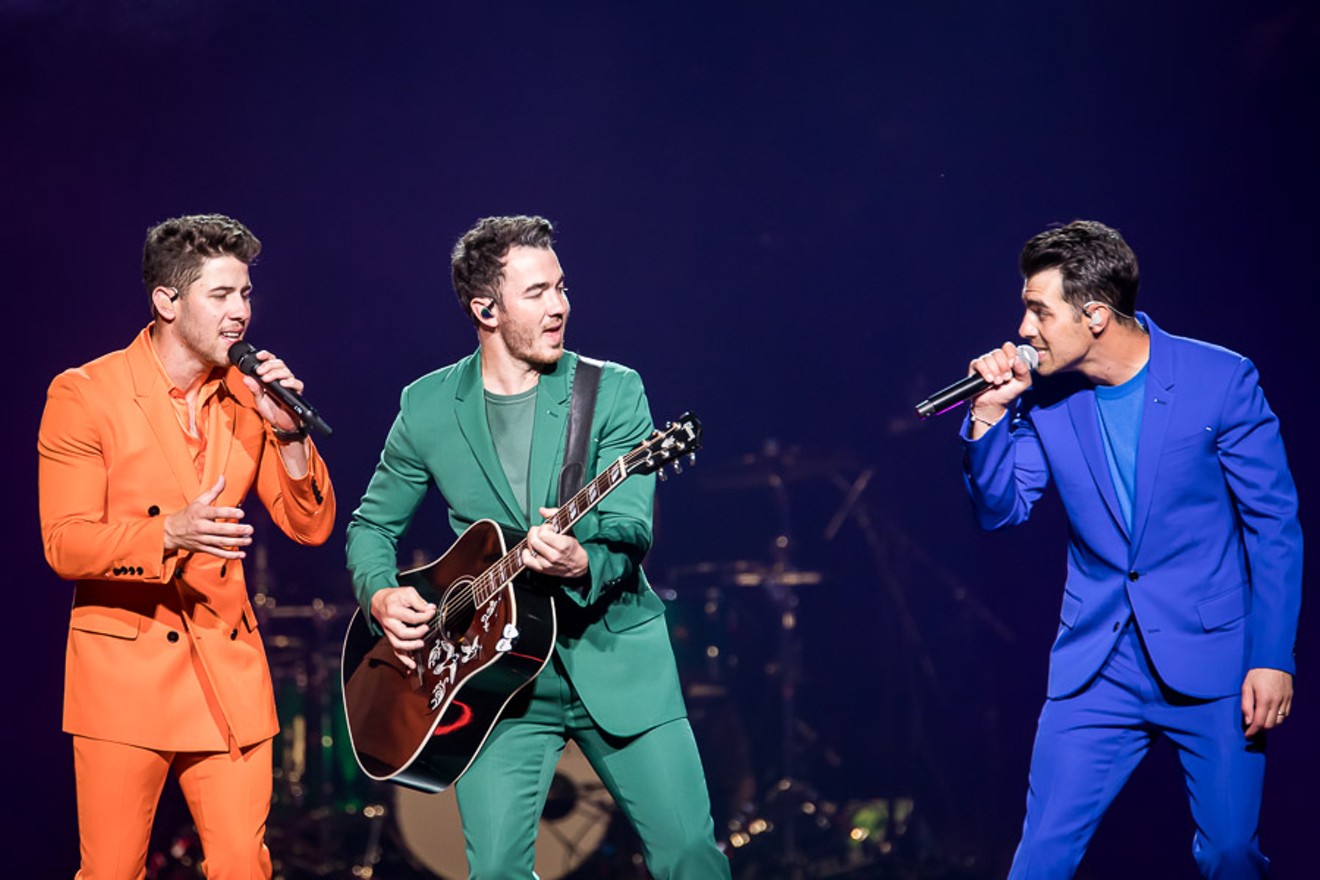 They’ve been celebrating on the road with the Happiness Begins Tour. Fans were treated to an energetic mix of songs, special effects, and sentimentality.

Through song choice and video imagery, they alluded to struggles they've faced in recent years. Even so, their Phoenix performance at Talking Stick Resort Arena was a deluxe dance party, capturing the joy both the brothers and their fans feel now that they’re reunited.

The trio descended from above the main stage on a black platform that lowered them to the ground as the audience unleashed the night’s first deafening collective scream.

Each wore a brightly-colored suit – orange for Nick, blue for Joe, and green for Kevin. The vibrant colors were repeated throughout the show, with geometric patterns and lines on the backdrop for the stage, firework effects, and inflatable tube men. Think boy band meets Meow Wolf. 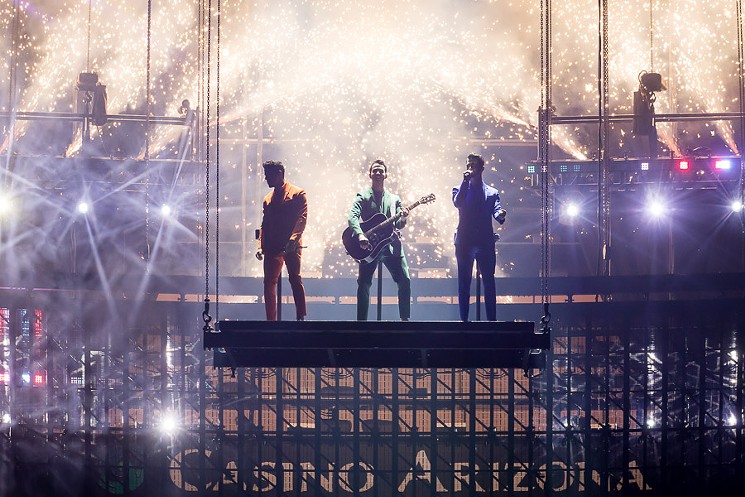 The Jonas Brothers: think boy band meets Meow Wolf
Leavitt Wells
They launched right into "Rollercoaster," a song clearly meant to reference the ups and downs of both their personal and professional journeys. As they performed, the image of a giant Ferris wheel projected behind them, suggesting shifting perspectives and the ability to take the long view.

The Jonas Brothers started the group in 2005 and split over creative differences in 2013. They announced in February 2019 that they’d reunited. Nearly half of the 21 songs they played in Phoenix are on the Happiness Begins album released in June, a full decade after their last studio album.

The audience stood for that first song and most of them stayed that way throughout the show. They danced with arms elevated for the most upbeat songs, from "Only Human" to "Year 3000." And there was plenty of bouncing by the brothers and their fans, which added to the dance party vibe. 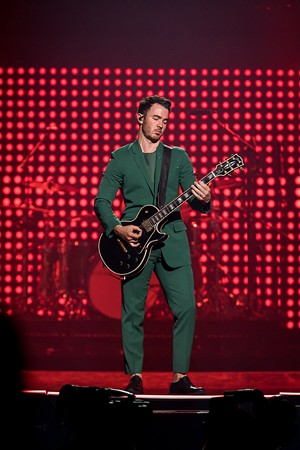 Kevin Jonas on guitar
Leavitt Wells
For part of the show, the brothers moved from the main stage to an ancillary stage on the opposite end of the arena, where they joked about how things have changed since the last time they performed together – including the fact that they’re old enough to drink now. Each raised a shot glass, temporarily transforming the arena into a giant ad for Nick’s new tequila venture.

More often, the show referenced their childhoods through videos featuring actors portraying younger versions of the brothers. Only a radically different image, a lush forest scene with Kevin and his two young daughters, broke through the monotony of childhood reminiscence.

The woods formed a stunning backdrop for the opening of their second act, which included a black piano seemingly suspended in the air descending slowly to the stage. Here, the brothers stepped onto the stage in black and white outfits, each fashioned to reflect the wearer’s style.

A steady stream of special effects, from the purple rising from the stage to the explosive multi-color confetti, kept the crowd in a near-constant state of uproar. Naturally, the brothers  saved flames shooting up from stage for "Burnin’Up," the first number in their two-song encore. Fans got one last chance to dance with “Sucker,” the final song of the night.

Odds are, they’ll be doing a happy dance as long as the Jonas Brothers stay together. 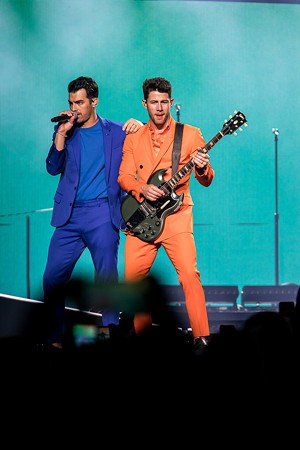 The Crowd: Mostly exuberant 20-something women who attended with friends, but some parents and boyfriends rounded out the mix.

Decibels: We didn’t measure, but figure it will take a good day to get normal hearing back. The Jonas Brothers’ fans were about twice as loud as the typical crowd for diehard fans of aging rock superstars.

Best quote: Joe Jonas: "I know you can because I was born in Arizona."

sign: Two friends with side-by-side signs. One read, “Been waiting for this 10 + years.” The other had an enlarged photo of the pair, timestamped with the date of the last Jonas Brothers concert they saw together.

Random Notebook Dump: Two fashion statements tied for most popular – Jonas Brother tour T-shirts and the classic pairing of a black spaghetti strap tank top with black short shorts.
KEEP PHOENIX NEW TIMES FREE... Since we started Phoenix New Times, it has been defined as the free, independent voice of Phoenix, and we'd like to keep it that way. With local media under siege, it's more important than ever for us to rally support behind funding our local journalism. You can help by participating in our "I Support" program, allowing us to keep offering readers access to our incisive coverage of local news, food and culture with no paywalls.
Make a one-time donation today for as little as $1.