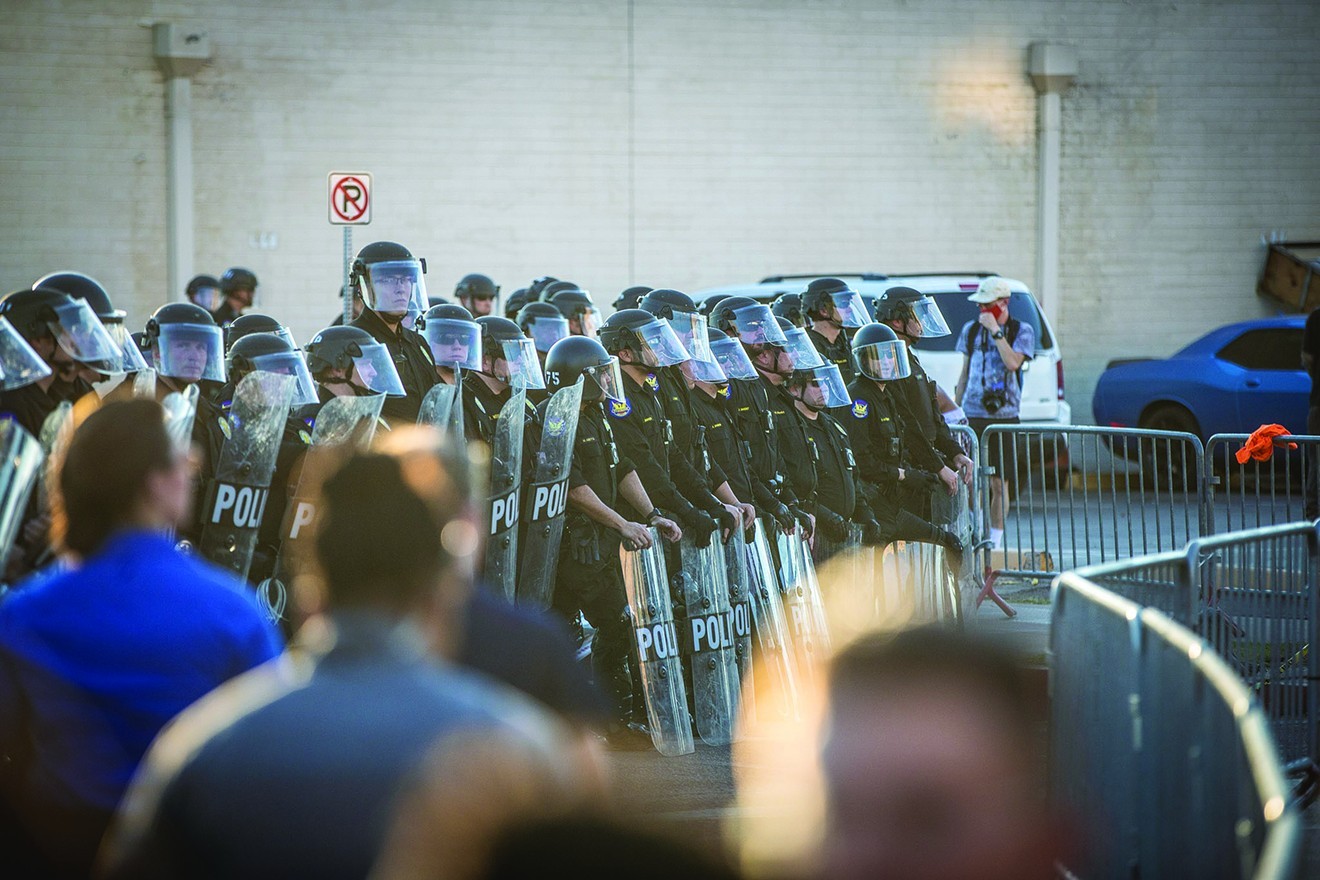 It's been five years since anti-Trump protesters claim they were beaten by Phoenix Police Department officers on a warm August night at the Phoenix Convention Center downtown.

This week a federal judge ordered a jury trial in which several key protesters can share their eye-witness experiences. Those conflict with the official police narrative. A trial date has not yet been scheduled.


All along, the city and its police department defended the use of force, saying it was a proportional response to a violent provocation. The four officers named in the civil lawsuit, but also city leadership, were never disciplined for such actions.

That is exactly what prompted the American Civil Liberties Union of Arizona and Pasadena, California-based civil rights law firm Hadsell Stormer & Renick LLP to file a class-action lawsuit in U.S. District Court in Phoenix in September 2018.

Protesters' attorneys are seeking reimbursements for medical expenses, undisclosed attorneys fees, and punitive damages, which means a jury could award more money at its discretion.

Mesa resident Cynthia Guillen remembers what it was like to be shot twice with ammunition described by police as "less lethal" while being tear-gassed.

“I had no warning,” Guillen told Phoenix New Times.

She described the pain of the barrage of weaponry as a "ten out of ten."


And she's not alone. Many other protesters in the crowd of around 6,000 claimed to have similar experiences.


The Phoenix Fire Department reported 53 emergency medical calls that night. About a dozen people were hospitalized.


The city of Phoenix shelled out well over half a million dollars during the unrest, which lasted more than four hours. Most of it paid police officers overtime as they barraged the dense crowd with 500 rounds of pepper spray balls and sixteen canisters of tear gas.

Smoke bombs and flashbangs cloaked the disoriented demonstrators in a plume of thick green smoke.


The department's policy surrounding nonlethal weapon discharge has scant direction on how many rounds can be fired, New Times reported at the time.

Police refute protesters' claims that they were attacked without warning. Some in the crowd were seen on video hurling projectiles at officers over a buffer zone. Police said their response was measured and proportionate.

Federal officials are inclined to disagree.


The Phoenix Police Department has since been placed under the microscope of the U.S. Department of Justice.

Since August 2021, the DOJ has been conducting a sweeping investigation into the Phoenix Police Department and the city of Phoenix for a host of allegations of police misconduct, excessive violence, and retaliation against protesters.


The probe, directed by U.S. Attorney General Merrick Garland and the DOJ's civil rights attorney Kristen Clarke, is looking into the police department's use of "all types of force," including deadly force.

The probe will evaluate if the city has been systemically lenient toward officers who are accused of violating people's constitutional rights. The Justice Department is also looking to see if there are patterns of discriminatory policing, including retaliation against protesters, unlawful seizure of property, and corrupt internal policies, department leaders said.

The evidence against the Phoenix Police Department "warrants a full investigation," Clarke said.

Despite this, it has taken a "long, long time to get to this point" in the court proceedings, said Jared Keenan, ACLU’s lead attorney in the case.

Phoenix-based advocacy groups Poder in Action and Puente Human Rights Movement are also plaintiffs in the class-action lawsuit, along with four protesters.

“The officers involved must be held accountable at trial," said Viri Hernandez, executive director for Poder in Action.

The City of Phoenix and Police Chief Jeri Williams are accused alongside a slew of police officers of violating protesters’ First, Fourth, and Fourteenth Amendment rights when police violently ended a free speech demonstration and used unnecessary force to do it.


All the city officials denied violating the U.S. Constitution, court records show. Police assert that the response to protesters' advances was justified because the safety of police was threatened in public.

Police attorneys deny in court that the protesters "have been chilled from participating in political expressive activities by the Phoenix Police Department's improper, excessive, and unconstitutional uses of force," as the civil complaint alleges.

Furthermore, the top brass at the police department denied that the agency failed to provide guidelines and regulations about situations such as protests and had "adequate training before the event."

Williams "specifically denies that she violated any of the Plaintiff's constitutional rights or rights existing under federal law."

Even with this lawsuit pending, Phoenix police dug themselves into a bigger legal hole in June 2020.

That's when protesters rallied against police brutality and systemic racism in Phoenix in response to the killing of George Floyd in Minneapolis the week before.

New Times documented the sometimes serious injuries protesters sustained at the time at the hands of police.


“They were herding us together,” said David Saccoccio who suffered a broken arm after police shot him.

The injury squashed his ability to work either of his jobs – as a hairdresser and bartender.


“We wanted to go home,” Saccoccio said. “I was panicking inside.”


Following that protest, Phoenix police refused to return seized property to protesters even after their criminal cases were tossed out.


Beyond that, county prosecutors have been more closely scrutinized than ever fending off one civil lawsuit after another.

ACLU attorney Keenan considers the partnership between the county and the city to defend themselves against police brutality lawsuits as "remarkably out of the norm."

For example, ACLU asserts that the Maricopa County Attorney's Office works in tandem with the Phoenix Police Department to convict as many protesters as possible and sometimes to seek charges defendants claim are outright false.

"If elected officials in the prosecutor’s office won’t hold accountable, the only thing left is for citizens to sue them,” Keenan said.


The Maricopa County Attorney’s Office did not return several requests for comment for this story.


Gullien, the protester injured in August 2017, is still on the hook for medical bills she incurred from her interaction with the police that night.

The 28-year-old boarded the Valley Metro train instead of an ambulance after her friends carried her to the station.

It hurt too much to sit down, she said in a court deposition.

Guillen denied participating in illegal activity during the protest.

Her fellow protester and Bisbee resident, Ira Yedlin, was hospitalized from his injuries.

Yedlin was 70 years old at the time and battling cancer when police shot him with eight rubber bullets.

“We don't see change because there is virtually no accountability for police engaging in violence,” Keenan, the ACLU attorney said.

And the political climate in Arizona is trending in the opposite direction, as lawmakers file bills critics claim to undermine efforts to hold law enforcement accountable for their actions in the field.

Ducey signed a group of bills in May 2021 that critics claim roll back civil rights.


Several bills were filed this year to bolster protection for police actions and limit accountability measures in the Arizona Legislature.

“I don’t have hope in our elected officials,” Keenan said. “Arizona officials do everything they can to make it impossible to hold police accountable in our state.”

More pressure for police to hold back the use of force has prompted some officers to be more violent in crowds, Keenan said.

That's why the ACLU asks the court to mandate the Phoenix Police Department to significantly curb its use of excessive force in the future.


“Phoenix Police Department is one of the most violent in the country,” he said. “It’s a deep-seated cultural problem within the police department. That has to change.”


Too often police officers hide behind “qualified immunity,” a doctrine that shields officers from civil lawsuits alleging that the official violated a person’s rights, he said.


The Phoenix Police Department used the argument of qualified immunity in the case but the judge shot it down.


“Qualified immunity stacks the deck in favor of the government against the individual,” Keenan said. “It’s a real problem.”