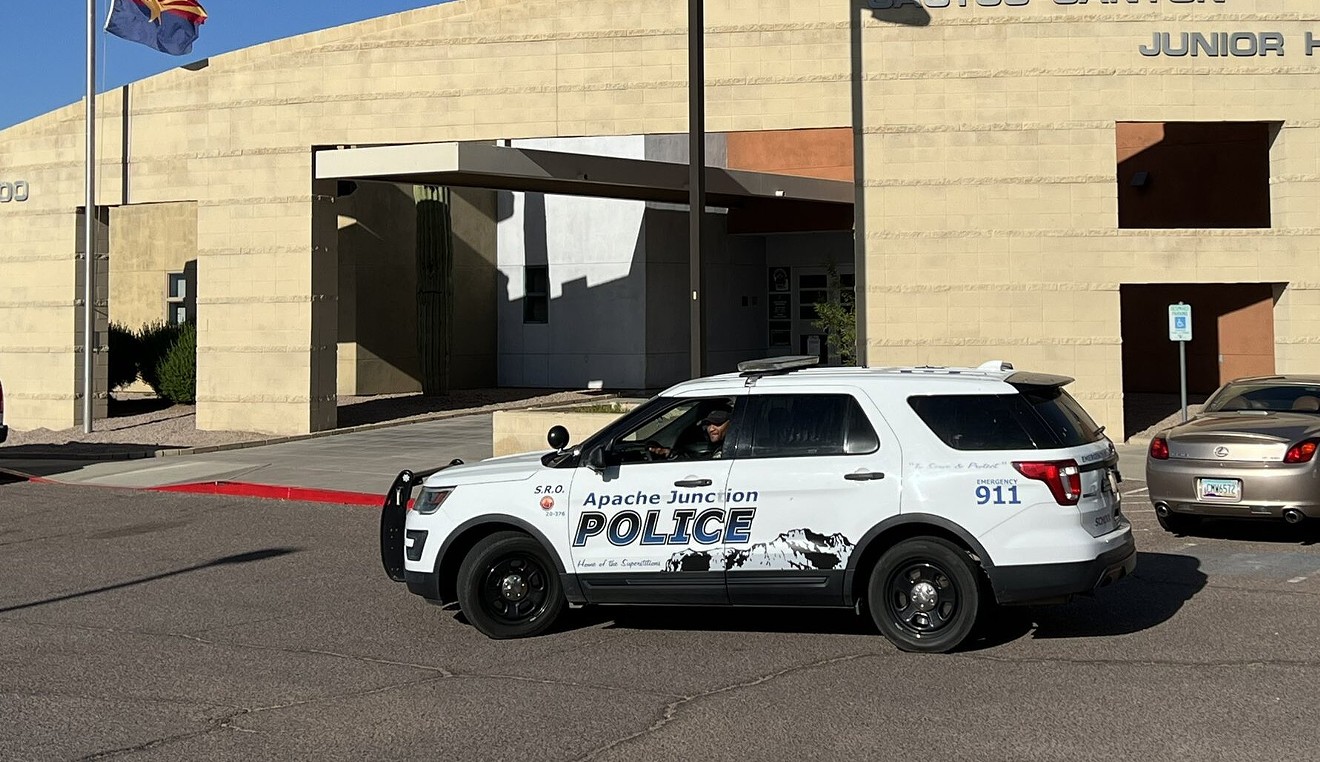 Apache Junction faces a lawsuit over its arrest and prosecution of a man who was filming the police. City of Apache Junction
On an August afternoon in 2021, Karl Williams stopped by a gas station in Apache Junction to fill his tank.

The convenience store, 4 Sons on 29th Avenue, sits just off the Superstition Freeway. But that day, an Apache Junction police cruiser was in the gas station lot. Officers had pulled over a car and were starting to search it.

Williams watched as two additional officers arrived on scene to search the car. The swelling police activity piqued his interest, and Williams took out his phone to record. That’s when his nightmare began.

As the state of Arizona faces mounting scrutiny — and legal challenges — over a new law that would strip away the right to film police officers, a recent civil rights lawsuit against the city of Apache Junction demonstrates how police can abuse such situations.

The lawsuit alleged that after Williams began recording Apache Junction officers from 15 feet away, he was arrested and prosecuted by the city on charges of resisting arrest and hindering prosecution. It's an ordeal that has lasted for months.

“That’s really scary, right, because under [the new law], it’s not clear if those charges could have been dismissed, said Ben Rundall, a senior staff attorney at the American Civil Liberties Union of Arizona.

Attorneys for Williams filed the lawsuit in Pinal County Superior Court on August 3, one year after his encounter with Apache Junction officers. It was recently transferred to federal court.

The city of Apache Junction, its police department, Assistant City Attorney Eric Yuva, and three officers are defendants in the lawsuit. The suit accuses them of false arrest, false imprisonment, and malicious prosecution.

The city has until September 19 to file an answer to the complaint in court. Apache Junction’s city attorney, Joel Stern, wrote in a statement to Phoenix New Times that the city won't discuss the pending litigation. “All we can say is that the matter has been transferred to federal district court since there is a federal law allegation,” he said. 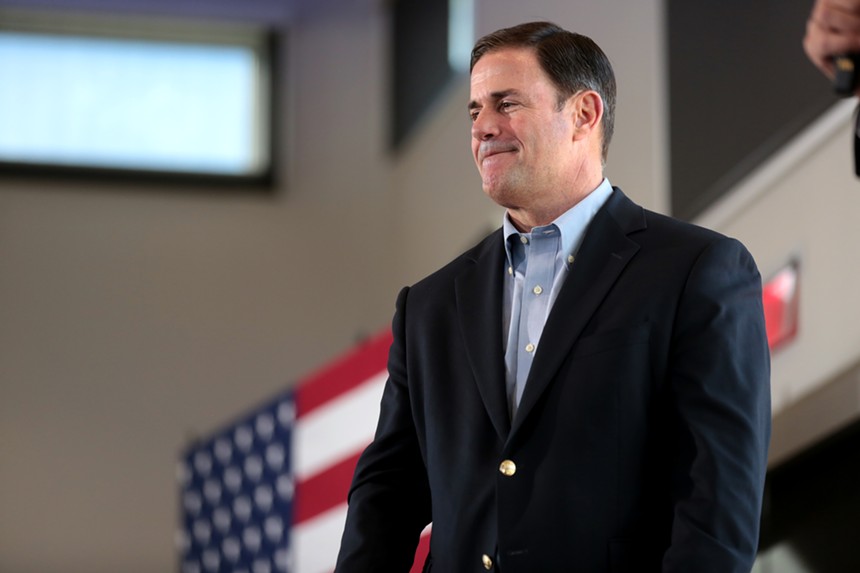 As the lawsuit makes its way through the courts, the state of Arizona is seeing another legal battle — over a recent law that would ban recording within eight feet of officers.

House Bill 2319, which was signed into law in July, makes it illegal to film a police officer within an eight-foot radius, unless the officer consents. Doing so would be classified as a class three misdemeanor, which is punishable by up to a month in jail.

Lawmakers — including bill sponsor State Representative John Kavanagh, a Fountain Hills Republican — were warned that the bill was likely unconstitutional. They moved it forward anyway. Arizona Governor Doug Ducey signed it into law in July. It's supposed to take effect on September 24.

The ACLU quickly sued over the law and called the law “unprecedented” and unconstitutional. The lawsuit was filed on behalf of the ACLU and 10 news organizations, including the Arizona Republic, the Arizona Mirror, and KOLD-TV, which claimed that the law would impact their ability to report on key events such as protests or police investigations.

“On its face, this statute infringes the clearly established First Amendment rights of plaintiffs and everyone else in Arizona to record the public activities of law enforcement officers,” ACLU attorneys wrote in the complaint.

The future of the law is unclear.

Arizona Attorney General Mark Brnovich, Maricopa County Sheriff Paul Penzone, and Maricopa County Attorney Rachel Mitchell, all powerful figures in the state who would be tasked with enforcing the law, are defendants in the suit. But all three have said they have no interest in defending the law in court. They also don't oppose an injunction by a judge to stop the law from taking effect, they said in court pleadings.

“The Attorney General is not the proper party to defend the merits of A.R.S. § 13-3732,” Brnovich wrote in a legal filing despite defending plenty of other state laws in the past.

If lawmakers want to preserve the fate of the law, they will have to find legal representation on their own to intervene in the suit.

Rundall said one danger of the law is its vagueness. “There’s so much ambiguity,” he said. Recording is prohibited within eight feet of “any law enforcement activity,” according to the statute, which is given such a wide definition that it could apply to most any on-duty police officer in public.

Rundall said that made it easy for anyone to face criminal charges in an interaction that was sparked by recording the police.

The new challenge to Apache Junction is just one example of what could happen in such circumstances.

An 'Illegal Battery, Seizure, and Arrest'

New Times’ account of Williams’ case is based largely on the information in the complaint, which attorneys said is supported by body camera footage from the officers. New Times requested the complete police report and bodycam footage from the incident, but the Apache Junction Police Department has not yet provided the material.

When Williams began filming, he was about 15 feet away from the officers and the car they were searching, according to the lawsuit. He “in no way interfered with the investigation or search,” attorneys said. But when the officers realizing they were being filmed, three of them — Sergeant David James and officers Craig Martin and Timothy Gearhart — approached Williams.

Williams, as James confronted him, requested that the sergeant not touch him. James replied that he would “do whatever the fuck I want,” and grabbed Williams’ neck. Williams was ultimately “thrown to the ground” and arrested.

Attorneys said the officers then seized Williams’ smartphone, deleted his video of the incident, and claimed that Williams instigated the whole event. When city prosecutors continued with the charges against Williams, they withheld convenience store footage of the incident. It was, Williams' attorneys claimed, an "illegal and tortious assault, battery, seizure, and arrest."

A citation obtained by New Times, signed off by an Apache Junction sergeant, shows the charges that Williams faced after the incident: Failure to comply with a police officer, hindering prosecution in the second degree, criminal nuisance, and resisting arrest.

City prosecutors pursued these charges for months. Williams, 53, had no prior convictions or criminal record and spent thousands of dollars on his defense.

In November, the city dropped the fourth charge, resisting arrest. In court records obtained by New Times, prosecutors offered little rationale behind the move and said only that the state would “proceed on the first three charges.”

In January, Williams learned that security camera footage of the incident existed and had not been provided by prosecutors. The Apache Junction police chief let that fact slip in a conversation with his brother. That was, “a serious violation of Mr. Williams’ constitutional Brady right to have exculpatory evidence disclosed to him,” according to attorneys for Williams.

The city did not answer questions from New Times about why the case was dismissed.

As legal pleadings in the ACLU suit over the eight-foot ban show, it’s not uncommon for people to be targeted for filming police, particularly in Maricopa County.

An amicus brief filed in the case by national civil rights group Electronic Frontier Foundation and local activist groups Mass Liberation and Poder in Action provided details on cases in which legal observers — people who intentionally record police actions at protests — were targeted by Phoenix police for recording.

“[Legal observers] have been targeted, arrested, and removed from the scene ... to prevent observation and recording,” according to the brief. In September 2020, one observer was followed by a Phoenix police officer and given a false citation after a protest, the brief stated. Without close-range recording, it’s difficult to document these cases.

“Recording police is synonymous with accountability,” Rundall said. “It's the right of every person to be able to record the functions of their government.”
KEEP PHOENIX NEW TIMES FREE... Since we started Phoenix New Times, it has been defined as the free, independent voice of Phoenix, and we'd like to keep it that way. With local media under siege, it's more important than ever for us to rally support behind funding our local journalism. You can help by participating in our "I Support" program, allowing us to keep offering readers access to our incisive coverage of local news, food and culture with no paywalls.
Make a one-time donation today for as little as $1.