Educator David Garcia announces that he will seek the Democratic nomination for governor of Arizona in 2018
Ray Stern
University professor and Democrat David Garcia fired up a crowd of cheering supporters at the State Capitol on Wednesday afternoon with his news that he would run against Governor Doug Ducey in 2018.

About 200 teachers, activists, state representatives, and fellow Democrats gathered around Garcia as he addressed them and reporters from a podium, pitching himself as the antidote to bad education policy.

Garcia ran unsuccessfully against Republican Diane Douglas for state schools superintendent in 2014. Wednesday, he explained that he was going to run again for the state schools job but changed his mind when Ducey — also a Republican — signed the school-voucher expansion bill last week.

The new law allows up to 30,000 Arizona students to use state money for private schools instead of public schools, expanding the system that previously gave vouchers to kids who were disabled or lived in low-income districts.


"If we're going to cut something, let's cut tuition for community colleges and universities." — David Garcia

"Governor Ducey landed the most devastating blow to public education in state history," Garcia said. "Make no mistake, [it] will drain hundreds of millions of dollars away from our public-school system ... I cannot run for a position whose job it is, is to administer the dismantling of our public schools."

So instead, he said, he's running for governor. He'll be an education candidate, he promised, helping schools and teachers, halting budget cuts, and raising taxes, if necessary, to do it. Voters have proven repeatedly they're willing to hike taxes to invest in the education of children, he said.

Calling Ducey's education plans "dangerous and cynical," Garcia said that "94 percent of our parents choose our public schools, and that includes charter schools," and the governor should honor their choice.

Garcia sits on the board of Arizona School for the Arts, Arizona's oldest charter school, which one of his children attends.

The voucher law "representing everything that's wrong with special interests and dark money hijacking our state," he said.

With the sleeves of his light-blue dress shirt rolled up, Garcia acknowledged he has hard work to do. Not only does he have to raise enough money to compete with the millions that Ducey will put up against him, he also has to beat other Democrats likely to run in the 2018 primary election.

Steve Farley, a state senator from Tucson, said last year he was considering a run for governor.

(And then there's Noah Dyer, the admitted debtor whose campaign material includes details of his sex life.  He  was also on the Capitol lawn on Wednesday afternoon, railing against the Democratic Party and news media for alleged dishonesty. Garcia probably doesn't have too much to worry about on that front.)

The afternoon news conference by Garcia drew about 200 people, including local teachers and activists.
Ray Stern
Garcia described himself as a fourth-generation Arizonan whose dad was a union painter. Growing up in Mesa, he was "not a great student," he said. But he cleaned up his act and joined the Army at age 17. His infantry experience shaped his life,

He later obtained a bachelor's degree from Arizona State University, and a master's degree and doctorate from the University of Chicago in education policy, research and institutional studies. Garcia previously worked for the state as associate superintendent of public instruction. He's currently an associate professor at ASU's Mary Lou Fulton Teachers College.

Despite his experience and support by some Republicans, Garcia lost narrowly in 2014 to Douglas, who is perhaps the most mocked Arizona elected official. In contrast to Garcia's scholarly style, Douglas appeared nearly uneducated to some pundits, and she ran on a single-minded quest to end the state's Common Core standards.

"We learned a lot in that 2014 race that we're going to apply here," Garcia said. 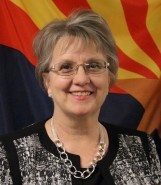 Diane Douglas, Arizona Superintendent of Public Instruction, beat Garcia by 16,034 votes in 2014.
Arizona Department of Education
What's needed in Arizona leadership, he said, is a different approach and creative ideas.

"If we're going to cut something, let's cut tuition for community colleges and universities," he said. "How about giving a break to working families, not just to corporations?"

He admitted it would take a "historic effort" to win the governor's race.

"We can do it!" someone shouted before leading the crowd in a chant of "si se puede."

Garcia rattled off a list of some other issues he said he wanted to look at as governor, including job creation, the environment, and immigration, but he didn't say much on those topics. He downplayed his inexperience in fields other than education, noting that past governors have come from all walks of life.

"If you're too ready to be governor, you've probably been a politician too long," he quipped.

"We need more funding to have these services for the kids that they need," she said. "The kids are our future."