Kelly Townsend's full post equating vaccinations with Communism. Facebook
Is it "Communist" to require children to get vaccinated?

The representative from Mesa took to Facebook Thursday morning to explain her logic.

"The most holy and sacred last frontier of sovereignty is our own body," she wrote. "Dearest friends and people of Arizona, it seems we are prepared to give up our liberty, the very sovereignty of our body, because of measles."

The day before, Governor Doug Ducey said he was "pro-vaccination and anti-measles." His comments referred to three bills that recently advanced in the Legislature that would make it easier to parents to opt out of vaccinating their children. Ducey has promised not to sign any legislation that would reduce the number of children being vaccinated.


"Dearest friends and people of Arizona, it seems we are prepared to give up our liberty, the very sovereignty of our body, because of measles." — Kelly Townsend

For the record, despite what you might hear from our state Legislature, vaccines are a lifesaving public health measure. They help reduce the spread of deadly diseases, like smallpox, that were once mass killers. They give a vast majority of people direct immunity to those diseases and indirectly protect people with compromised immune systems, like cancer patients.

But Townsend, who has a history of saying inaccurate and/or explosive things on Twitter (see "furries"), and Facebook (see "celebrities and addiction" or "women and rape"), ignored those facts in her post, which framed vaccination requirements as an attack on individual liberty.

"I read yesterday that the idea is being floated that if not enough people get vaccinated, then we are going to force them to," she wrote. "The idea that we force someone to give up their liberty for the sake of the collective is not based on American values but rather, Communist."

Townsend then said that she had a child who was injured by vaccines, without elaborating further, and demanded that instead of focusing on requiring vaccinations, Arizona should put more money into researching vaccine injuries. She did not immediately respond to an email requesting more detail of the claims about her child.

She signed off with a popular quote from Benjamin Franklin, the one about how those who give up "essential Liberty, to purchase a little temporary Safety" don't deserve either, which really doesn't apply in the context of vaccines. (Also, Franklin wasn't talking about anything remotely related to vaccines when he wrote that — he was talking about arms and money.) 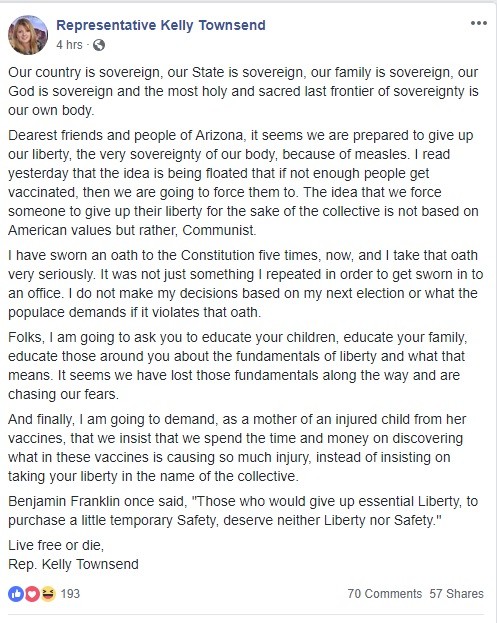 Kelly Townsend's full post equating vaccinations with Communism.
Facebook
KEEP PHOENIX NEW TIMES FREE... Since we started Phoenix New Times, it has been defined as the free, independent voice of Phoenix, and we'd like to keep it that way. With local media under siege, it's more important than ever for us to rally support behind funding our local journalism. You can help by participating in our "I Support" program, allowing us to keep offering readers access to our incisive coverage of local news, food and culture with no paywalls.
Make a one-time donation today for as little as $1.
Elizabeth Whitman was a staff writer for Phoenix New Times from March 2019 to April 2020.