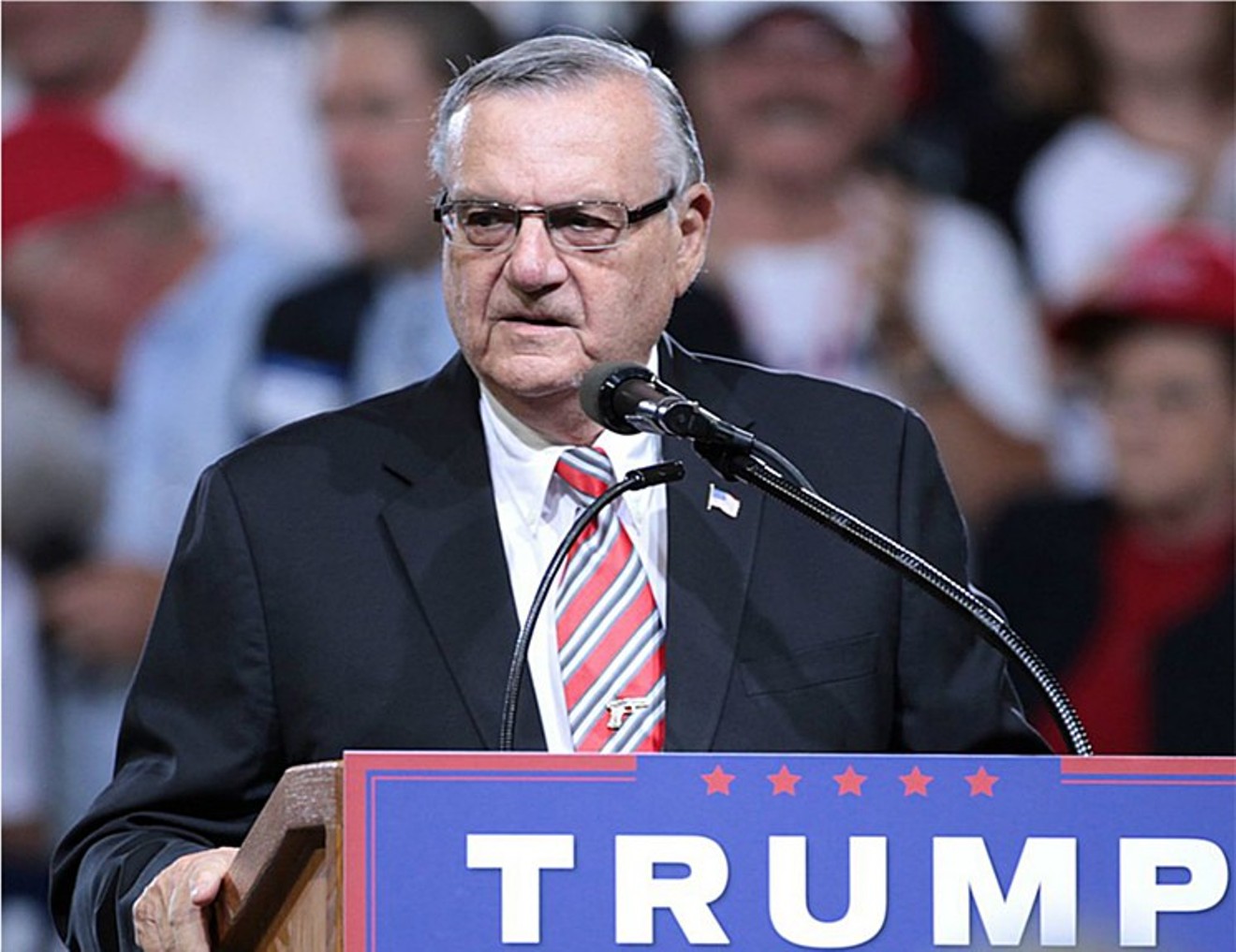 The 86-year-old ex-lawman claimed he’d been “duped,” telling Phoenix New Times news editor Ray Stern that he was genuinely confused by Cohen, who posed as a spazzed-out, orange-haired YouTube star from Finland.

But the thing is, Arpaio’s shtick has always involved acting the fool.

In 2006, for example, Arpaio played dumb while making an appearance at a now-defunct Scottsdale restaurant, the Pink Taco, to offer his hearty endorsement for the eatery, which was selling pairs of pink boxers autographed by the sheriff – like the kind Arpaio made inmates wear beneath their black-and-white jail stripes.

“I never knew about that," Joe insisted. "I thought the tacos at Pink Taco were pink. I'll be surprised if they're not.”

For the uninitiated, Arpaio’s persona is one part Mr. Magoo, nine parts Augusto Pinochet — Chile’s bloodthirsty former dictator. It’s been a winning combo for him. Voters snickered at Arpaio’s mad capers, laughed when he joked about having his own “concentration camp” (a.k.a. Tent City), and whooped it up when he bragged about how he fed the MCSO’s dogs better than his prisoners, who were mostly people awaiting trial.

Over 24 years in office before voters finally kicked him out in 2016, Arpaio’s callousness toward inmates and insouciance at the conditions in the jails culminated in the deaths of numerous inmates.

Some died at the hands of jailers, like Scott Norberg did in 1996 when he was suffocated in a restraint chair. Others, like Philip Wilson, died at the hands of fellow inmates: In 2003, Wilson caught the ire of the Aryan Brotherhood, whose members beat him into a coma from which he did not awake.

Heaven help you if you had a serious medical condition, like diabetic mom Deborah Braillard. In 2005, detention officers denied her medication and ignored her as she writhed in her own feces and vomit before going into shock and dying.

As always, the lawyers sued, and the county paid out millions in settlements and awards. The public, for the most part, either shrugged at or applauded what critics labeled Arpaio’s “culture of cruelty.”

Arpaio’s vindictiveness knew no bounds. Anyone who opposed him was targeted – whether it was the former owners of this newspaper and its reporters, rival politicians, or members of the county board of supervisors, the keepers of Arpaio’s purse strings.

Nor were judges, fellow law enforcement leaders, or the state’s Attorney General immune from Arpaio’s misuse of his office to investigate people and gin up false charges against them.

Furthermore, Arpaio’s regime was riddled with corruption and malfeasance. He was caught illegally diverting $100 million in voter-approved funds, and his investigators botched hundreds of sex crimes in El Mirage, many involving minors.

For the latter scandal, Arpaio offered a halfhearted mea culpa in 2011, saying, “If there were any victims, I apologize to those victims.”

By that time, Arpaio had discovered the perfect scapegoat for all occasions: Mexicans in the U.S. sans papers. He was a bit of a late bloomer in this department. In 2005, Arpaio had claimed, “Being illegal is not a serious crime. You can’t go to jail for being an illegal alien.”

Once Arpaio realized how much voters despised illegal immigration, he did an about-face and turned his agency into a local version of the U.S. Immigration and Customs Enforcement (ICE) with the assistance of a federal grant of authority known as ICE’s 287(g) program.

Arpaio’s deputies engaged in large-scale sweeps of Latino communities, pulling over cars on the thinnest of pretexts in the hunt for illegal aliens. Businesses suspected of employing the undocumented were raided. U.S. citizen children sometimes witnessed their parents being collared.

In 2007, the ACLU sued Arpaio in federal court, claiming that Arpaio’s office was illegally profiling Latino drivers. In 2013, federal Judge G. Murray Snow found Arpaio and the MCSO guilty of racial profiling and ordered a court-appointed monitor and a series of reforms for the department.

Arpaio remained defiant, thumbing his nose publicly at Snow’s authority while secretly investigating the judge for supposedly being part of a wacky, nonexistent conspiracy to bring the sheriff down. For not following Snow’s orders, Arpaio eventually would be found guilty of civil contempt, and later, criminal contempt.

Ever wily, Arpaio endorsed Donald Trump in early 2016, when everyone was laughing off the billionaire’s presidential candidacy. As POTUS, Trump returned the favor, pardoning Arpaio in 2017. Arpaio suffered the ultimate indignity the year before – losing re-election in a red county by double digits to Democrat Paul Penzone, whom Arpaio outspent nearly 13-to-1.

Maricopa County still suffers from the financial fallout from Arpaio, two years after Penzone replaced him. The ACLU’s civil rights case, Melendres v. Arpaio reportedly will have cost an estimated $130 million by the end of the next fiscal year. The county had to raise property taxes to keep up with the expense.

When Arpaio announced that he was running for Senate, pundits groaned. Some ultra-conservative Republicans grumbled the ex-sheriff was playing spoiler for Kelli Ward, Arizona’s loony, far-right Joan of Arc. But Arpaio was determined to enjoy his last hurrah, rebuffing what he described as efforts by Ward’s campaign to have him drop out.

In the end, Arpaio mainly succeeded in garnering himself loads of press. Even being hoodwinked by Cohen puts him in semi-famous company, with the likes of Sarah Palin, Ted Koppel, and Bernie Sanders. From a practical standpoint, Arpaio did help hobble the brain-scrambled Ward’s efficacy as a candidate. Which is a good thing.

During his concession speech last night in Fountain Hills, Arpaio struck a morose tone, thanking supporters, his wife, Ava, by his side.

Sorry, but our hometown diablo doesn’t deserve sympathy. Save it for Arpaio’s many victims, some buried before their time, some terrorized by racial profiling, others humiliated in ways America’s “toughest sheriff” will never experience.

As for Arpaio’s loathsome career, put aside his silliness and clownish antics. Remember instead the trail of blood, slime, and misery that he’s left behind.
KEEP PHOENIX NEW TIMES FREE... Since we started Phoenix New Times, it has been defined as the free, independent voice of Phoenix, and we'd like to keep it that way. With local media under siege, it's more important than ever for us to rally support behind funding our local journalism. You can help by participating in our "I Support" program, allowing us to keep offering readers access to our incisive coverage of local news, food and culture with no paywalls.
Make a one-time donation today for as little as $1.