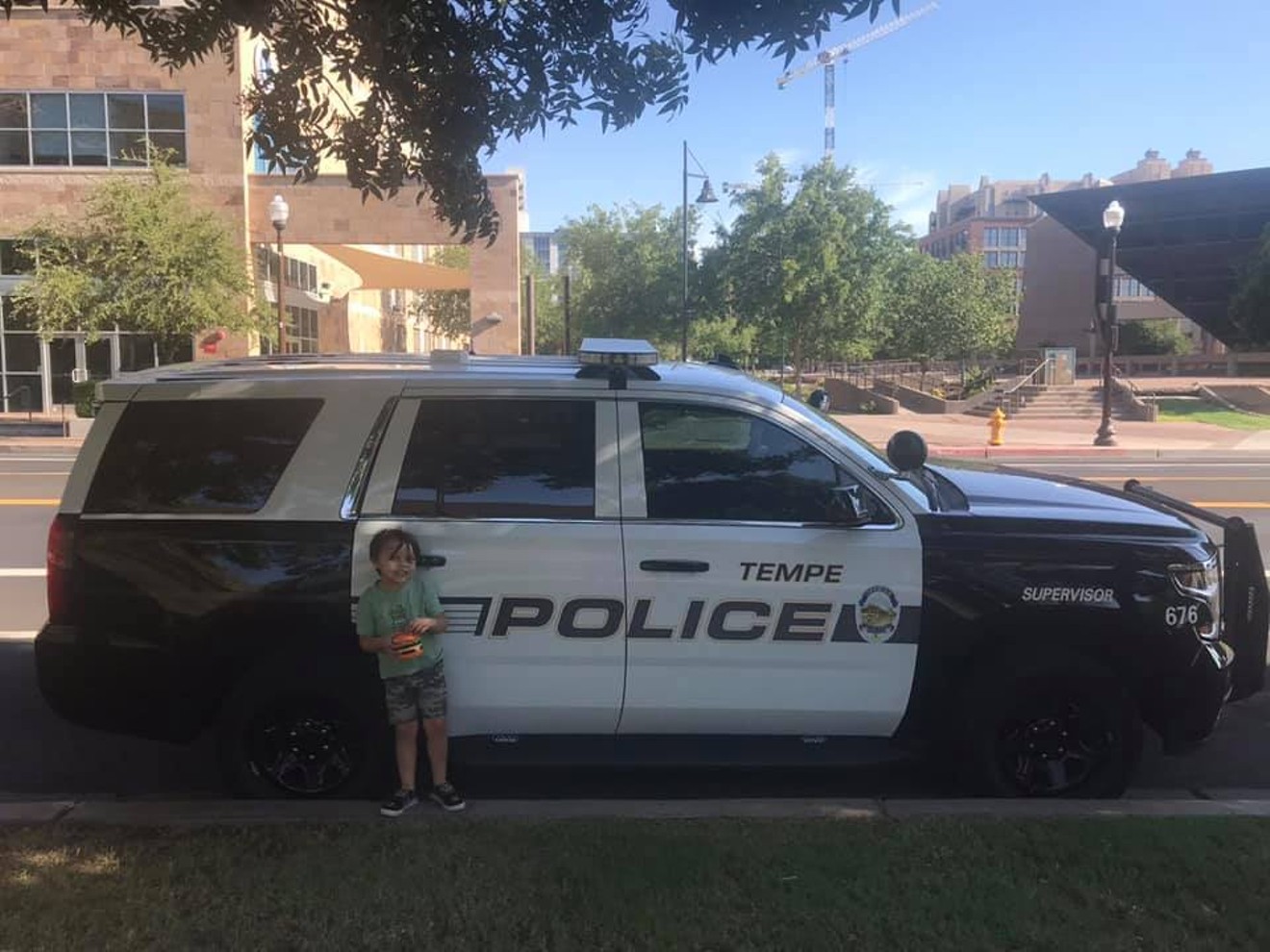 The Tempe Police Department wants to "get back to community policing," one detective told New Times. Antonio Martin

The coronavirus pandemic had a much greater effect on the Tempe Police Department than the killing of George Floyd in 2020, an Arizona State University study released this week asserts.

Critics may suggest that's a bold claim to make for just one research study and decry unfairness to compare a global health crisis with a political justice movement spurred by the killing of one Black man by police.


But the ASU professor of criminology dove deep and tracked police trends from 2017 to 2021. The data trove included police calls for service, reported crime, police presence in the community, traffic accidents, and arrests.


Researchers also reviewed body camera footage from 475 police interactions and measured the use of force, a consistent issue advocates levy against the Tempe Police Department.

When Joel Cornejo was 11 years old, a Tempe police officer pointed a loaded gun at him inside a middle school, he claims. That's why he founded Semillas AZ, a grassroots human rights advocacy group based in Tempe.

"Tempe Police Department hides behind the liberal front that the city likes to show," Cornejo told Phoenix New Times. "The reality is that the city overfunds the police department in Tempe. The police in Tempe do whatever they want with no accountability."

Tempe Mayor Corey Woods, who is a Black man, was elected to serve the residents of the city in March 2020 and is still in office. Woods did not respond to a request for comment for this story.


The pandemic had a drastic effect on the day-to-day lives of Valley residents. Financial strain, isolation, and disrupted routines were perhaps overshadowed by the loss of loved ones, depression, and declining physical health.


Last month, the U.S. surpassed a forboding milestone — more than 900,000 Americans’ lives were robbed by the deadly virus, on track to hit 1 million dead next month.


“The pandemic altered every aspect of police activity,” said Michael White, a professor of criminology and criminal justice at ASU and the lead author of the recent study.


Police officers bore the brunt of responding to the reality of the pandemic, enforcing stay-at-home orders while cutting back on community outreach projects, pedestrian stops, and overall police presence.

“No one dislikes bad cops more than good cops."

Meanwhile, Tempe Police Department struggled with a personnel shortage as more and more officers were incapacitated by the virus as waves of infections would take workers out of the field.


Mask mandates not just for the public but for officers alike became a challenge for the Tempe Police Department, Detective Natalie Barela said.


“Mandating face coverings gave us challenges to have that personal face-to-face connectivity with people,” Barela told New Times. “We’re responding to people in crisis. We want to be empathetic and a lot of that is tied to facial expressions.”


Just two months after Arizona along with much of the nation began the social and economic lockdown, a stark reminder of the long history of police brutality against Black individuals happened.

Minneapolis police officers killed George Floyd, a 46-year-old Black man while trying to arrest him on suspicion of floating a counterfeit $20 bill at a convenience store. Anti-police protests both peaceful and sometimes violent erupted in the city and spread across the country.


The aftermath of that incident on policing nationwide was arguably the biggest in American history, advocates assert.


“The killing of George Floyd and of other Black Americans by the police spurred unprecedented scrutiny of the police, protests, and calls for defunding,” White, the researcher who is himself white, said. “These occurred against the backdrop of the pandemic, which police responded to in myriad ways, and both the killings and the pandemic coincided with a large increase in violent crime.”


Data released by the FBI shows a 30 percent spike in murders across the U.S. during the pandemic.

Researchers predicted a radical drop in property crime during the lockdown, but economic depravity led to a jump in thefts and robberies, too.


The effect of the pandemic and Floyd’s death on crime was mixed, according to the study which was peer-reviewed and published in an academic journal.

It was not immediately clear where the funding for the research study came from through it appears that it was part of the regular research curriculum through ASU, not supported by an outside group attempting to influence the results for political gain.


Researchers noticed a significant decrease in all reported crime when COVID-19 reared its ugly head in Arizona. That temporary pause in all crimes reported lasted months after Floyd’s death.


Arrests were slashed in half and traffic accidents fell nearly 60 percent as police responded to 22 percent fewer citizen-initiated calls and 11 percent fewer officer-initiated calls. That's likely because so few people were driving on the roads and instead worked from home.


The fallout from Floyd’s death was different, both researchers and cops concurred.

While the government response to the pandemic widely accepted that major changes to modern life would be required to keep the public safe, there was more dissent when advocates demanded less aggressive police interaction with communities of color.

For example, the Tempe Police Department already had measures in place to prevent a similar tragedy in Tempe. And argued that was enough.

Those measures were bolstered when the city established the Tempe Public Safety Advisory Task Force in October 2020.


“George Floyd allowed us an opportunity to sit down, examine things, and have difficult conversations,” Barela said.


While calls for service and traffic accidents dropped in frequency, officer productivity “declined precipitously” and use of force among officers in Tempe spiked in the weeks following Floyd’s death, data shows.


“No one dislikes bad cops more than good cops,” Barela said. “It hurt a lot of us to see how the actions of those few officers really affected everybody.”


The department ranks last of more than 13,000 local agencies nationwide for investigating discrimination complaints and more than half of people who have died after interactions with Tempe police officers are unarmed, according to Police Scorecard, a national data clearinghouse for police conduct.


Tempe Police used more deadly force against people of color than 95 percent of police departments in America, according to FBI data.

"The police in Tempe do whatever they want with no accountability."

Barela declined to answer questions about the Police Scorecard results, but mentioned the department wants to “get back to community policing.”


“That’s the direction we want to go,” the detective said.


Barela sees ASU criminology researchers as a community-building resource, not a watchdog scrutinizing the department from across the street.


“They help us be a better service to the public,” she said.


There is “a possible interactive effect between the pandemic and Floyd’s death,” the ASU study found, but the changes that have happened since the pandemic began are far more pronounced in Tempe, the eighth-largest city in Arizona.

“The study’s findings highlight the localized effects of these events,” said White, the lead researcher. “This study tells the story of one city, but it has implications for policy beyond Tempe."


Cornejo, the community activist, would rather see public health take a back seat to racial inequity inside the police department.


"Programs that bring public health resources to the community help the community stay safe," he said. "Not the police."
KEEP PHOENIX NEW TIMES FREE... Since we started Phoenix New Times, it has been defined as the free, independent voice of Phoenix, and we'd like to keep it that way. With local media under siege, it's more important than ever for us to rally support behind funding our local journalism. You can help by participating in our "I Support" program, allowing us to keep offering readers access to our incisive coverage of local news, food and culture with no paywalls.
Make a one-time donation today for as little as $1.
Elias Weiss is a staff writer at the Phoenix New Times. A native of Charlotte, North Carolina, he reported first for the Northwest Arkansas Democrat-Gazette and was editor of the Chatham Star-Tribune in Southern Virginia, where he covered politics and law. In 2020, the Virginia Press Association awarded him first place in the categories of Government Writing and Breaking News Writing for non-daily newspapers statewide.
Contact: Elias Weiss
Follow:
Twitter: @ecweiss