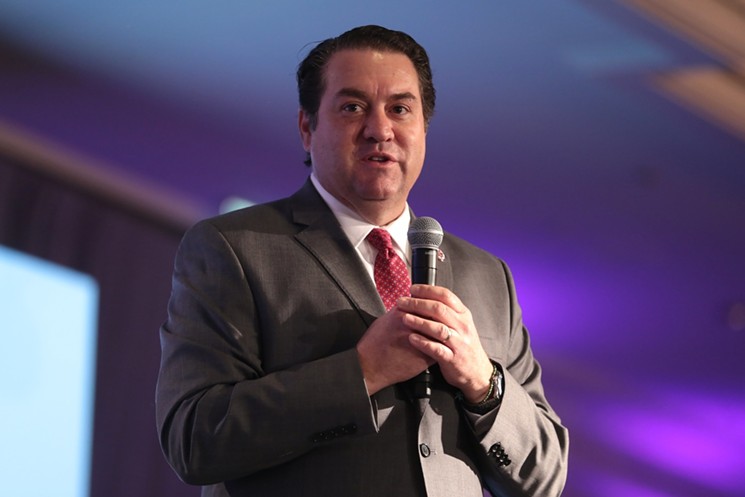 Attorney General Mark Brnovich says ASU sweetened deal with Omni Hotels.
Gage Skidmore
This story was updated at 2:40 p.m. on April 4 with a response from Arizona State University. See below.

Arizona Attorney General Mark Brnovich launched yet another salvo against the Arizona Board of Regents and Arizona State University late Wednesday night with an amended civil complaint claiming that ASU violated the Arizona Constitution's ban on gifts by promising $28 million up front to Omni Hotels as part of a lucrative deal to build a four-star hotel and conference center on prime university land in Tempe.

The new complaint adds fresh accusations of wrongdoing to a lawsuit that the AG's office filed in January, which said ASU and the board of regents had broken state law by improperly allowing Omni to shield itself from $21 million in property taxes that otherwise would have gone to support community colleges and K-12 schools.

Brnovich alleges that the deal effectively amounts to the sale of the 1.6 acres at the southeast corner of University Drive and Mill Avenue for an amount far below fair market value. ASU agreed to pay as much as $19.5 million toward the cost of the center's construction, and to build a $30 million, 1,200-space parking lot, with 275 spaces set aside for Omni as an "incentive." These 275 spaces are valued at $8.5 million.

Omni will lease the land from ASU at a "pre-paid rent" of $85 per square foot," or approximately $5.9 million, with an added $1.09 million per year in "additional rent" to ASU for the duration of the 60-year lease. Omni will retain the option to purchase the hotel and convention center, as well as the land its on land and any improvements, for a token $10.

That would be bad enough, but Brnovich claims that the regents allowed ASU lease the land to Omni (with the option to buy at the cost of a sawbuck) at the cut-rate price of $85 per square foot, when the real value of the property "may be closer to to $212 [per square foot], representing a sale of up to $8.9 million below market." The suit compares the ASU property to similarly developed property in the same area that went for anywhere from $132 per foot to $257 per foot.

The complaint paints a picture of a transaction sold to the public as far more beneficial to ASU, with the university's representatives stating publicly that the Omni Hotel project would "maximize revenue" for ASU and receive "market rate" for the property.

Brnovich is fighting a two front war against the ASU-regents axis, which he also has accused of not fulfilling the state constitution's mandate to make in-state tuition “as nearly free as possible.” A superior court judge dismissed an AG lawsuit to that effect in 2018, but Brnovich is appealing and seeking review by the Arizona Supreme Court.

Phoenix New Times is seeking comment from ASU and the regents and will update this story when more information is available.

Update: ASU has issued a response to the lawsuit, accusing the Attorney General of "cherry-picking" facts. It further states that:

New Times is seeking answers from ASU to follow-up questions concerning the source of the $140 million and an explanation of the AG's allegations regarding the fair market value of the property.

Read the AG's Amended Complaint Against ABOR/ASU
KEEP PHOENIX NEW TIMES FREE... Since we started Phoenix New Times, it has been defined as the free, independent voice of Phoenix, and we'd like to keep it that way. With local media under siege, it's more important than ever for us to rally support behind funding our local journalism. You can help by participating in our "I Support" program, allowing us to keep offering readers access to our incisive coverage of local news, food and culture with no paywalls.
Make a one-time donation today for as little as $1.