40,000 Jehovah's Witnesses fill the seats of Chase Field on Friday, August 9, 2019, the first day of an international convention. Elizabeth Whitman
Monique Hebert left the Jehovah's Witnesses about two decades ago, after a boy in her congregation touched her repeatedly and threatened to rape her, she said.

She considers herself lucky, because those incidents helped her break free from a branch of the group in Wyoming, where they lived at the time.

Hebert's mother initially refused to believe her, until she saw the boy "doing things" to Hebert and other girls, Hebert recalled. At the time, they were no more than 12 years old, she estimated.

When Hebert's mother went to the elders of the congregation to tell them about the boy's threats, they didn't care.

"There was no listening to me, no response," Hebert said. "There was never even a 'Let's see what we can do.' It was, 'What's wrong with you?'"

Eventually, Hebert's mother allowed her to stop attending meetings. Hebert, who is now 32 and lives in north Phoenix, is not supposed to talk to current Jehovah's Witnesses, including her own mother, because of her status as an ex-Witness.

"It's a high-control organization," Hebert said, a quality she attributed to "some religions and some cults."

Hebert and her mother still talk, even though her mother has been reprimanded for doing so.

In fact, they were texting on Friday morning as Hebert's mother sat on a bus on her way to Chase Field in downtown Phoenix, where she would join 40,000 Jehovah's Witnesses from all over the globe. Members are gathering Friday, Saturday, and Sunday for the group's 2019 convention — three days of music-video presentations, prayers, songs, addresses, symposiums, and dramatic readings from the Bible, according to the program for the event.

As the convention commences, critics of Jehovah's Witnesses, including Hebert, are trying to speak out against the group's isolating cult-like practices, including shunning those who split from the group, and its history of covering up child sexual abuse. 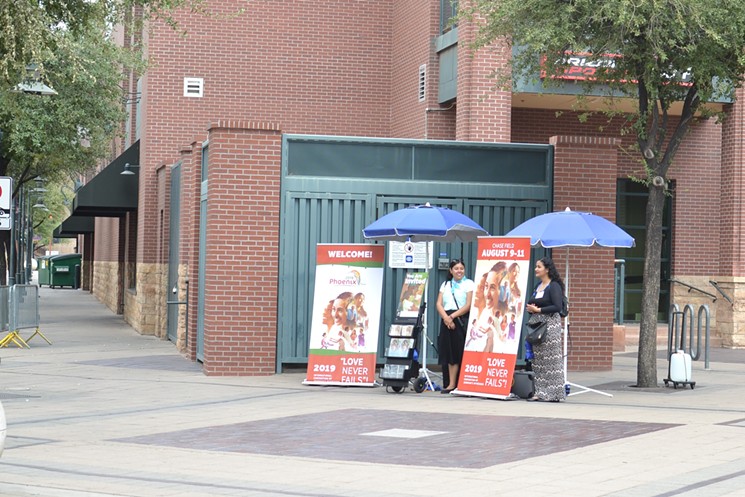 The United States has some 1.2 million Jehovah's Witnesses — under 1 percent of adults — and worldwide, there are 8.4 million, according to the group. You may recognize them from the times they've knocked on your door and proselytized, but ex-Jehovah's Witnesses say that what the public should really know is the organization's tight control over its members.

Although they identify as Christians, Jehovah's Witnesses' beliefs differ from other sects of Christianity. The group has one of the lowest rates of retention of all religions. By adulthood, 66 percent of those raised as a Jehovah's Witness will have exited, according to the Pew Research Center. Jehovah's Witnesses also tend to be less educated than other major religious groups.

The religion has a long but only recently documented history of covering up child abuse within its congregations, as The Atlantic reported earlier this year. The institution's governing organization, the Watchtower Bible and Tract Society, has gathered data about potential predators from nearly 11,000 congregations in the U.S. for more than 20 years, but it refuses to release that information.

Countries outside the U.S., including the Netherlands, Belgium, and the U.K., have launched criminal inquiries into the Watchtower Bible and Tract Society over child sexual abuse allegations. In a damning report released in 2016, the Australian Royal Commission determined that "children are not adequately protected from the risk of child sexual abuse in the Jehovah’s Witness organisation."

A few states have ordered Jehovah's Witnesses to pay damages to survivors of abuse after the organization covered it up. In Montana last September, a jury awarded $35 million to a 21-year-old woman who said she had reported sexual abuse by a family member to church leaders, who did nothing.


In a damning report released in 2016, the Australian Royal Commission determined that "children are not adequately protected from the risk of child sexual abuse in the Jehovah’s Witness organisation."

As a child, she was homeschooled. She was banned from socializing with people outside the congregation. Inside, elders taught that anyone who didn't share the Witnesses' beliefs were going to die.

"When I was a kid, I was in constant fear of Armageddon, which they preach about at nearly every meeting," Hebert said.

Women had to wear skirts, even during subzero temperatures, and were generally considered troublesome and less valuable than men, Hebert added.

More than anything else in the Kingdom Hall, dissent was anathema. 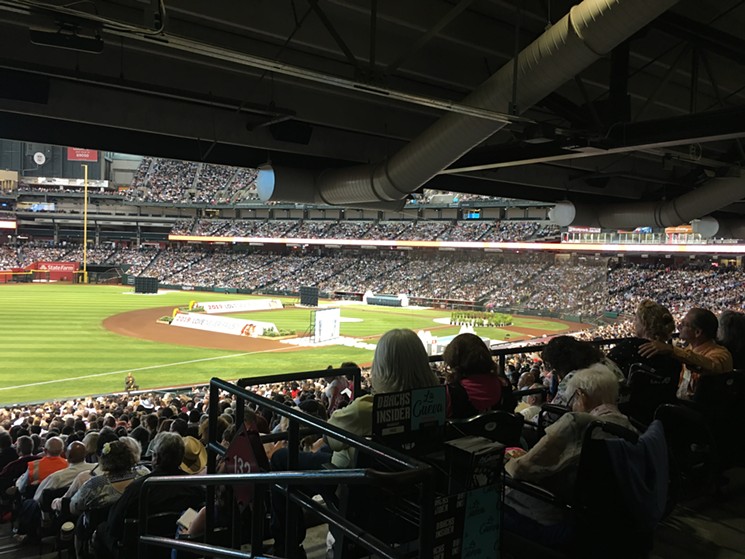 The D-backs would probably give a lot for attendance like this.
Elizabeth Whitman

One person who is not attending the convention is a man who asked to be called Keith, who lives in the east Valley. He requested anonymity because his immediate family, and his wife's, are still Jehovah's Witnesses, and they could face backlash for his speaking out.

Keith was born into a Jehovah's Witness family in the Midwest, he said. In his late 20s, he began questioning the religion. He still has not officially left the church, he said — he just doesn't go anymore.

Although Keith said he was never abused or molested, he knew of people in his congregation who were, adding that abuse was fairly widespread. He said he wanted the public to know how permissive Jehovah's Witnesses is of child abuse, and how that permissiveness is codified in church materials.

He referred to a book called Shepherd the Flock of God, a manual for church elders on how to handle their responsibilities. The book was intended for leaders' eyes only, but it became public after being submitted as evidence in a court case by the Australian Royal Commission.

Keith pointed to page 38 of the manual, which discusses what elders should do "if it comes to light or an appointed brother confesses that he has committed [an] ... offense years in the past." Child abuse was a sin that "would likely disqualify him for many years" — not permanently — it said.

On the next page, the manual begins referring to offenses as "difficulties," offering justifications for why a brother who "experience[s] difficulties" should not be immediately disqualified. "Perhaps he just made a mistake, using poor judgment on an occasion. ... Perhaps the matter is not widely known, if at all," it reads. "It may be that he can continue to serve."

For any accusations of wrongdoing, the manual cites Deuteronomy in proclaiming, "there must be two or three eyewitnesses, not just people repeating hearsay; no action can be taken if there is only one witness." The two-witness rule, as it is often called, has been an asset to Jehovah's Witnesses in ignoring — or covering up — child sexual abuse.

"I think most normal people think of them as a kooky religion that shows at your door every once in a while. They don't understand the level of control that the religion exerts over its members."

The manual also lays out (see page 72) what to do if a person accuses someone else of child sexual abuse: Two elders should "contact the branch office" — in the United States, that'd be the office in New York, according to Keith — "before arranging a meeting with the child and the alleged abuser."

If the accused denies the accusations, "and the wrongdoing is not established, the elders will leave matters in Jehovah's hands," the manual says.

Keith said he also wanted the public to know how controlling the organization is.

"I think most normal people think of them as a kooky religion that shows up at your door every once in a while. They don't understand the level of control that the religion exerts over its members," Keith said. "People should definitely know that Jehovah's Witnesses are a cult."

When Keith was active in the congregation, he was considered exemplary, he said. Since his informal departure, relations with his family have been strained — emails exchanged every few months, and always with an undertone: "When are you coming back?"

The stadium at Chase Field in downtown Phoenix, which can seat up to 48,519 people, was packed shortly before noon on Friday.

Attendees listened rapturously to a man speaking in center field. Six Jumbotrons sat in the outfield and at first and third bases. Many people took notes. All the women wore skirts or dresses. In the nosebleed section above the right-field foul line, a sea of people fanning themselves looked like leaves fluttering on a tree.

When Phoenix New Times popped in, just to check things out, an attendant wearing a crisp suit and an orange lanyard quickly approached.

"Can I help you find a seat?" the attendant, who later introduced himself as Jonathan from Las Vegas, said. New Times, feeling conspicuous in pants, declined. But Jonathan insisted, insisted some more, and then proceeded down a set of steps to the seats facing left field. He politely inquired of attendees whether that empty seat was taken. It always was.

During the retreat back up the stairs, another attendee, also in a crisp suit and orange lanyard, and perhaps noticing an obvious lack of proper female attire at a Jehovah's Witness convention, stopped and asked New Times insistently, "Can I help you find a seat?"

New Times declined, only to be met by a third attendant. "Do you need any help finding a seat?" he asked, smiling beatifically.
KEEP PHOENIX NEW TIMES FREE... Since we started Phoenix New Times, it has been defined as the free, independent voice of Phoenix, and we'd like to keep it that way. With local media under siege, it's more important than ever for us to rally support behind funding our local journalism. You can help by participating in our "I Support" program, allowing us to keep offering readers access to our incisive coverage of local news, food and culture with no paywalls.
Make a one-time donation today for as little as $1.
Elizabeth Whitman was a staff writer for Phoenix New Times from March 2019 to April 2020.