When Will We Know Why Tim Jeffries Kept Guns, 80,000 Rounds of Ammo at DES? 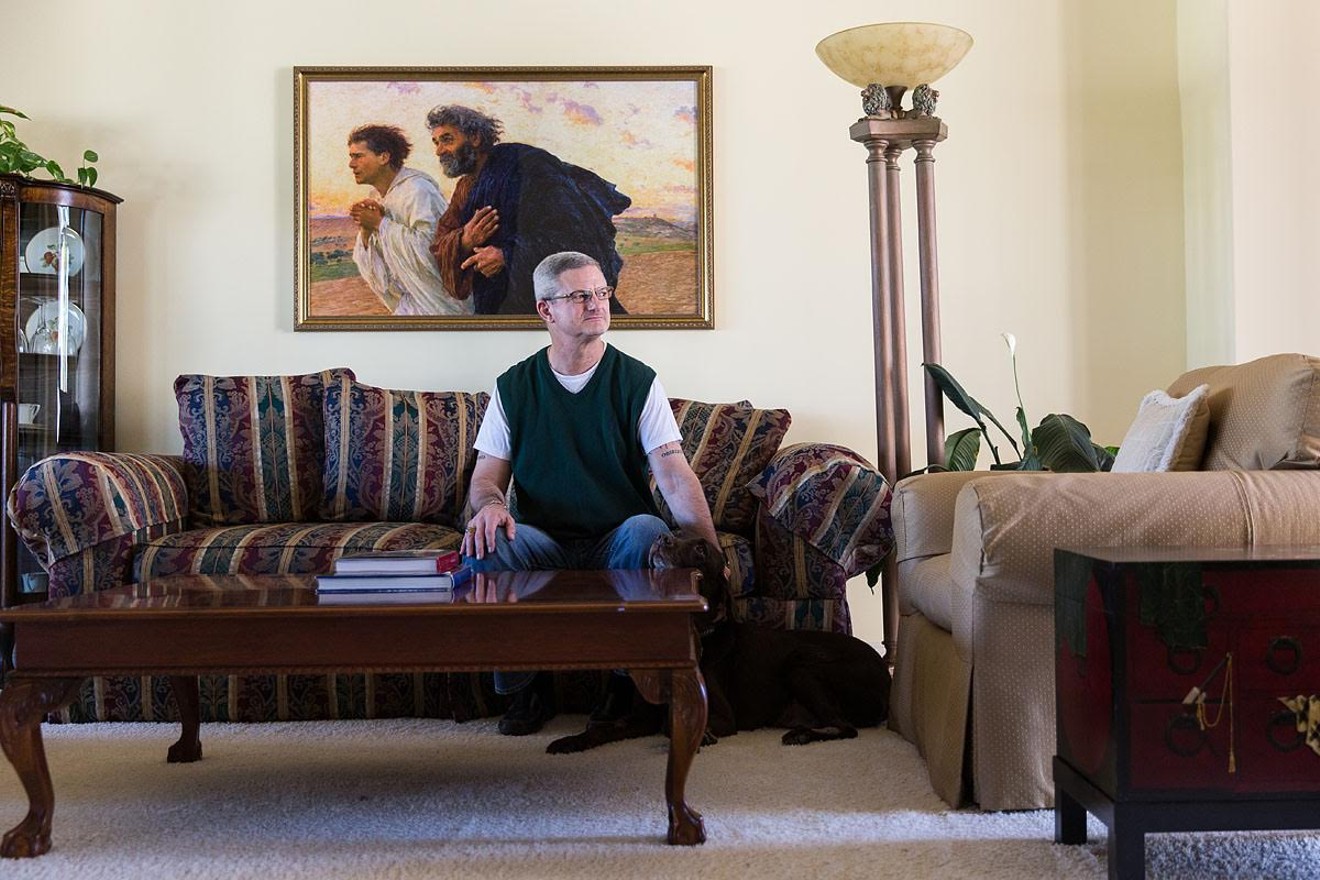 Tim Jeffries, former Arizona DES director, expressed outrage this week after learning that DPS was still working on an investigation about guns and ammunition found at the DES headquarters after he was fired. Deanna Dent
State investigators can't yet tell the public if dozens of guns and 80,000 rounds of ammunition found at the Arizona Department of Economic Security in November were improperly obtained or stored.

State troopers discovered and seized the weaponry while escorting fired DES Director Tim Jeffries and his top staff members out the door on November 23.

The staff members included the director of DES' Office of the Inspector General, Jay Arcellana, and the agency's chief of security at the time, former state Attorney General investigator Charles Loftus, whose roles had become supremely important under Jeffries.

Officials say they're still working on an investigation of the arsenal, despite statements by a state Department of Public Safety spokesman to the Arizona Capitol Times in February that a report based on the probe had been completed.

Jeffries, reached by e-mail this week during one of his well-known trips to a Catholic holy site in France, said he was "red hot" over the apparent delay of the investigation and report.

"I am in Lourdes serving the sick, and the recent DPS comment has jeopardized my state of grace," he wrote. "Folks throughout the Capitol know the original DPS report was finished over two months ago. It was delivered to DES bureaucrats and the Governor's ax men over two months ago.

"DPS is NOW 'still' working on the report because the aforementioned minions do not like the ORIGINAL REPORT that clearly exonerates past leadership and our prudent actions to protect DES colleagues and clients," he added with emphasis.

Governor Doug Ducey forced Jeffries to resign after a series of articles in the Arizona Republic that followed up on reporting by the Phoenix New Times and Arizona Capitol Times.

Charles Loftus, former DES head of security.
Arizona Department of Economic Security
New Times began reporting on Jeffries' unusual reign in 2015 after Ducey appointed him, covering Jeffries' campaign of mass terminations at the agency, his use of state e-mail to send religious and political messages to the agency's 8,000-plus employees, and his boosting of security measures.

Craig Harris of the Republic, who won a national Polk Award for his work, expanded the story of the mass firings and uncovered other potential scandals, like Jeffries' alleged purchase of alcohol after work hours for DES employees in Nogales and the discovery of the guns and ammo at DES headquarters.

Ducey had backed Jeffries for most of the former businessman's reign as director, appearing not to care about the terminations or other eyebrow-raising actions by Jeffries. Ducey canned Jeffries after a month of negative headlines in the state's largest newspaper, but never accused Jeffries of doing anything wrong. The governor's office conducted no investigation into any alleged state-policy violations by Jeffries.

Jeffries claimed the terminations were part of Ducey's plan to reduce the size of state government. He also claimed the purchase of alcohol for employees last year happened after 5 p.m., after the Nogales office was closed for the day. DES spokeswoman Tasya Peterson, who went on the Nogales trip, refuses to comment about whether he's right or wrong.

Similarly, it's unclear whether Jeffries or his staff violated any policies regarding the DES cache of guns and ammunition.

Jeffries' expansion of the DES Office of Inspector General, an internal law-enforcement division, troubled many in the public and state government.

An example of the smiley faces that Jeffries ordered stitched to the backs of 300 DES security-officer uniforms.
DES
"Why did DES have 80,000 rounds of ammunition in the first place, and why do they have a police force?" Ryan Anderson, Brnovich's spokesman, told Harris for a November 30 article.

Jeffries' use of OIG officers to target DES employees accused of crimes, sometimes arresting them at their desks, also raised concern among some people. DES supervisor Gary Phillips, for example, was arrested in front of fellow employees at this desk and publicly accused of assaulting a co-worker. An OIG report later revealed Phillips had touched a co-worker's leg; he was never charged with a crime.

As New Times reported in its February wrap-up of Jeffries' term, "Ducey's Fallen Angel," the AG's office was outraged at how DES handled a sitting lawmaker's benefits-fraud case.

Jeffries maintains he was trying to save money by replacing a contracted private-security company with an force hired internally. Many of the new DES security officers would be armed, as some of the private guards had been, which necessitated the purchase of new firearms and ammunition for training at the shooting range.

"The business manager signed off on this," former DES security chief Charles Loftus said. "We'd be hundreds of thousands of dollars ahead if we got internal security."

One of the guns found at Arizona DES headquarters after former director Tim Jeffries was dismissed in November.
Arizona Department of Public Safety
The change dovetailed with Jeffries' paranoia over terrorist attacks and the need to keep his DES "colleagues" safe. Jeffries took one of the DES handguns home, claiming later that he wanted to practice on the same gun used by the security team.

Loftus said he oversaw the purchase of 55 handguns of the 75 he believed were needed. Half had been "deployed" with security officers; the other half was stored on the fourth floor of the DES headquarters in downtown Phoenix, in a safe, he said.

It's true the 80,000 rounds of ammunition were in the basement — it was a logical place given the storage need, he said.

The unit actually needed 100,000 rounds so that each new officer could practice and qualify at the range, as required, Loftus said.

He denied reports that any of the ammo had gone "missing." He looks forward to the conclusion of the investigation into OIG and the guns, because he did nothing wrong, he said.

Numerous guns and thousands of rounds of ammunition were requisitioned by the DES and documented, records obtained by New Times show. Whether those documents fully account for all the guns and ammo is likely one of the factors that investigators are looking at.

Loftus said he has an appointment to talk with a DPS investigator about the probe on Monday.

Yet according to a February 17 article by Gary Grado of the Arizona Capitol Times, that report should have been done by now.

DPS spokesman Kameron Lee told Grado that the report on the investigation was due to be finished that day, and would then be forwarded to the DES.

The basement safe where some of the DES ammunition was stored.
Arizona Department of Public Safety
"We will be pushing everything to them (DES) to talk about and discuss however they're going to handle whatever comes out of the report," Lee reportedly told Grado.

Grado's story also mentioned a second probe of "all security matters and all the inner workings" of the DES OIG that was supposedly ordered by Ducey's chief operating officer and interim DES director, Henry Darwin.

However, DES spokeswoman Tasya Peterson told New Times this week that there is only one investigation, and that it's still ongoing.

"DPS has not yet completed its work on this investigation," said DPS spokesman Raul Garcia. "Trooper Lee did make the statement to Gary Grado regarding the February dates, however, that information was premature."

The agency has assigned an inspector to oversee the DES OIG until the probe is completed and "new leadership" for the DES division can be found.

"We understand that the public wants to know what occurred at DES," Garcia went on. DPS "wants to ensure its investigation is thorough to provide not only a clear picture but also an unbiased perspective of what occurred."

Jeffries insisted that the report "is being altered to justify the massive and unnecessary SWAT team show of force" on the day he was removed from his job.

He claimed he obtained this information from state representatives, whom he didn't name.