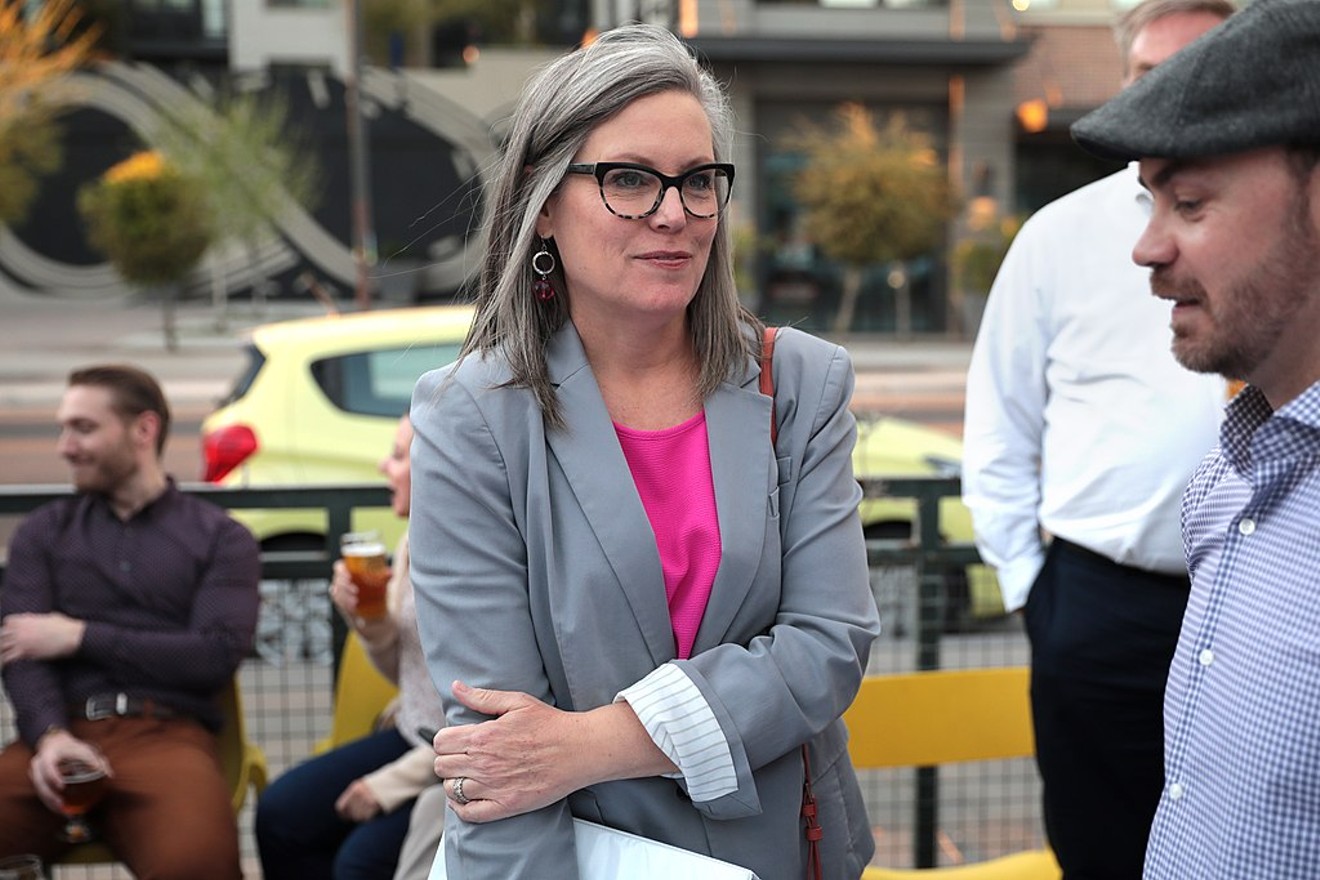 The Citizens Clean Elections Commission offered Katie Hobbs an olive branch — one more week to agree to a televised debate with Republican opponent Kari Lake. Gage Skidmore/Creative Commons
Editor's Note: This story was updated on September 9 to correctly reflect that the Citizens Clean Elections Commission voted 3-1 on September 8 to grant a one-week extension to Secretary of State Katie Hobbs to decide whether she will participate in the gubernatorial debate.

Hobbs, Arizona’s secretary of state and the Democratic nominee for governor, is the only statewide candidate still refusing to participate in a traditional debate with her opponent.

After skirting deadlines and promising up until the last minute that she had “every intention of participating” in a debate, Hobbs did an about face and rejected the invitation a week after the original deadline to respond. She instead offered a new proposal: two separate 30-minute infomercials to air back-to-back, one for her and one for opponent Kari Lake, the Republican nominee and former TV news anchor.

On Thursday, the Citizens Clean Elections Commission formally dismissed Hobbs’ proposal for a town hall-style interview in lieu of a traditional debate — a format that's been a staple of Arizona politics for decades.

“Our mission is to have debates, not town halls,” said Commissioner Galen Paton, a Republican. “If they want to have town halls, they can do that somewhere else. [Hobbs] is trying to subvert what we’ve been doing, and it will cause problems in the future.”

Here’s what’s ironic: According to an Arizona statute, if Hobbs refuses to debate, Lake will be awarded the debate time for — hold onto your hats — an hour-long interview all to herself.

Hobbs’ town hall idea was widely panned among Republicans and Democrats alike on social media. Voters showed up in droves to the elections commission's meeting on Thursday to express their yearning for a traditional debate. Commissioners weren't pleased, either.

At times on Thursday, the discussion about the gubernatorial debate grew contentious. Commission Chair Damien Meyer, a Democrat, had to cut off Hobbs’ campaign manager, Nicole DeMont, as she spewed insults about Lake’s policy proposals during a conversation about scheduling.

When asked whether Hobbs would be open to a debate on October 12, DeMont told Meyer, “I don’t answer hypotheticals.” After an awkward silence, Meyer responded. “That was not a hypothetical question," he said.

Ultimately, the elections commission voted 3-1 — Meyer, Paton and Independent Mark Kimble in favor with Democrat Steve Titla voting no — to give Hobbs one more week to agree to a debate. If she can’t come around by next Thursday, it’s going to be The Kari Lake Show on Arizona PBS.

In a prepared statement released on Wednesday night, Lake called debating “one of the most basic qualifications of leadership” and said that if Hobbs got her way, she’d “set a dangerous new precedent that allows candidates to hide from voters.”

“We are sorely disappointed but not surprised by Katie Hobbs sabotaging the debate,” Lake said. “Arizonans deserve at least one opportunity to see two candidates side-by-side.”

At the commission meeting on Thursday, DeMont said it was “pretty clear” that Lake only wished to recreate the circuslike spectacle of the GOP primary debate in June.

“You can’t debate a conspiracy theorist,” DeMont said. “She’s not interested in debating real solutions. When she decides to come back to reality, then we can start to have a real policy debate.”

FiveThirtyEight, Race to the White House, and POLITICO have each declared the race a toss-up.

Here's How We Got to the Debate Stalemate

In July, candidates all over Arizona — including Hobbs — received save-the-date notices from the Citizens Clean Elections Commission.

On August 10, the commission followed up with a “highly detailed invitation” that requested an RSVP by August 26. The commission’s executive director, Tom Collins, shared the invitation with reporters.

The Hobbs campaign responded to the invitation on August 22, asking if there would be any changes to the proposed debate format — the same one used in a 2020 Senate debate that won a Rocky Mountain Emmy award. The commission said no. Meyer noted that it’s “not typical” to demand format changes without suggesting alternatives.

On August 26, the day of the deadline, Hobbs requested a meeting with commissioners to discuss the issue further. They obliged and extended the deadline to September 2. All the while, Hobbs’ spokesperson, Joe Wolf, told reporters, “We have every intention of participating.” On September 2, Hobbs officially rejected the invitation.

Kimble, an Independent, recalled inviting Hobbs to debate in July. “Not until September do we receive a proposal from the Hobbs campaign — not tinkering around the edges, but a complete revamp of the whole thing,” he said. “Enough. This is the format that we have set up.”

Even Titla, who at one point sided with Hobbs, concluded, “The debate is best, I’m thinking.”

Public commenters overwhelmingly expressed their longing for a live debate. Of the 16 people who spoke during the public comment portion of Thursday’s meeting, 13 of them called on Hobbs to seize her final opportunity to say “yes.”

Lake spokesperson Timothy LaSota called Thursday’s vote “a defining moment for the commission” and said it “needs to stick to its guts.”

“We look forward to contrasting our agenda with Katie Hobbs’ radical left-wing agenda,” LaSota said. “This is an unprecedented request to alter the rules of a debate. This is an insult to the voters of Arizona. It’s a cop-out. She’s simply unwilling to show up on stage. That is nobody’s fault but Katie Hobbs.'"

If Hobbs rejects the debate again in a week, get your popcorn ready for the Kari Lake After School Special on October 12.
KEEP PHOENIX NEW TIMES FREE... Since we started Phoenix New Times, it has been defined as the free, independent voice of Phoenix, and we'd like to keep it that way. With local media under siege, it's more important than ever for us to rally support behind funding our local journalism. You can help by participating in our "I Support" program, allowing us to keep offering readers access to our incisive coverage of local news, food and culture with no paywalls.
Make a one-time donation today for as little as $1.
Elias Weiss is a staff writer at the Phoenix New Times. A native of Charlotte, North Carolina, he reported first for the Northwest Arkansas Democrat-Gazette and was editor of the Chatham Star-Tribune in Southern Virginia, where he covered politics and law. In 2020, the Virginia Press Association awarded him first place in the categories of Government Writing and Breaking News Writing for non-daily newspapers statewide.
Contact: Elias Weiss
Follow:
Twitter: @ecweiss