Lemons: Gun-Totin' Left-Wingers Demonstrate at the Arizona Capitol: Is Bloodshed on the Horizon? 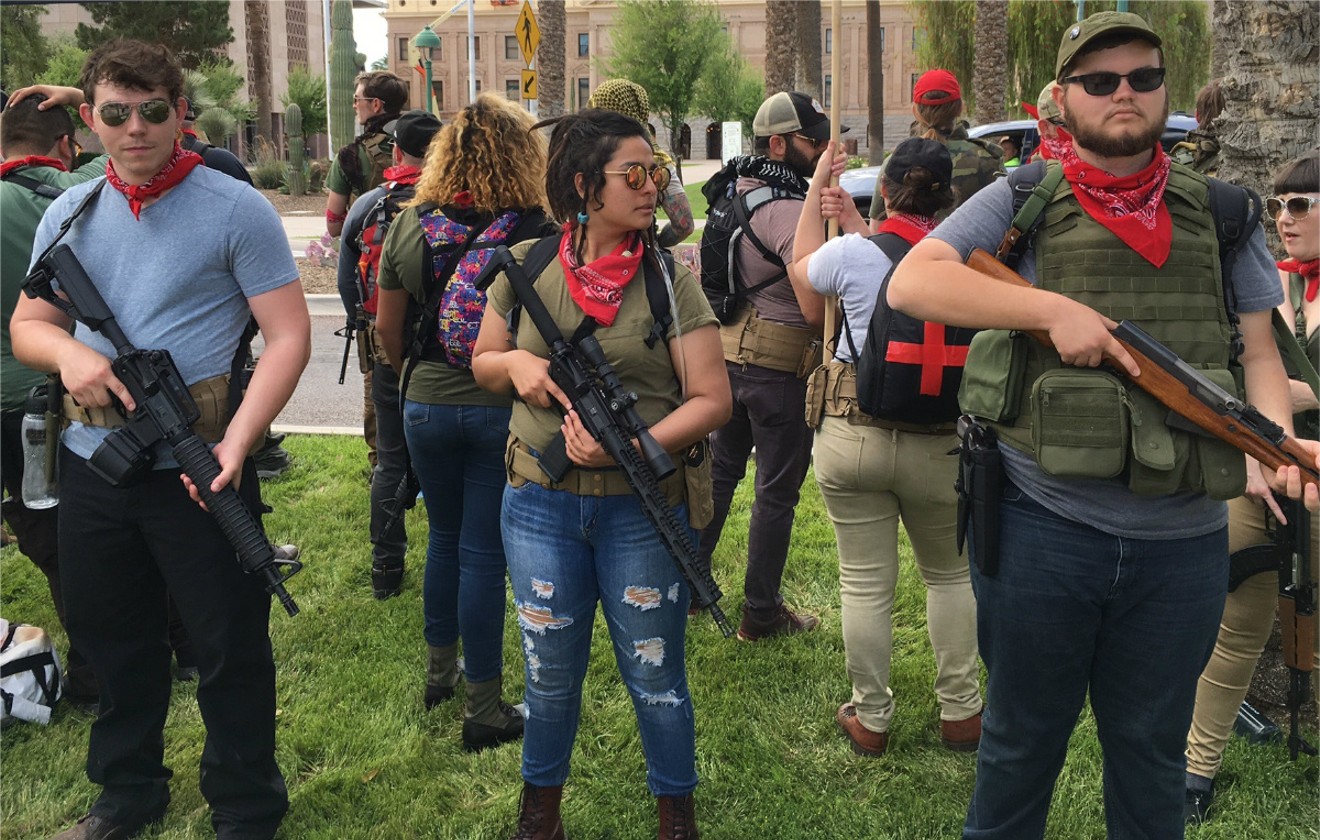 At least, that was my first impression upon seeing about 40 or so assorted anarchists, Brown Berets, and members of a group calling itself the Phoenix John Brown Gun Club across the street from the state Capitol, openly armed to the proverbial teeth.

I was late to the pro-Trump "Make America Great Again" march, which began at Cesar Chavez Plaza — after some confusion about the demonstration's starting at the now past-tense "Patriots Square Park" — and ended at the lawn of the Arizona Capitol.

So I headed straight to the Capitol, but the pro-Trump event was petering out. One of the cops present told me that the MAGA march consisted of a group of about 100.

However, across the street, on the Wesley Bolin Memorial Plaza-side of 17th Avenue were the left-wingers, some of them masking their faces, some not. Many of them were armed with long guns. You know, just like the "patriot" groups.

While I was taking photographs of them, a woman approached me and told me that the group would not be granting interviews. She gave me a flier with a statement from something called the "Redneck Revolt," which according to the flier aims to "put the RED back in redneck."

The flier directed people to a Facebook page and a website, and the woman said that I could contact them after the fact to ask questions.

About that time, the group lined up, double-file, and began walking toward 19th Avenue.
click to enlarge

Counter-demonstrators at the MAGA march included heavily-armed Brown Berets, anarchists, and assorted left-wingers.
Stephen Lemons
Since you don't every day see groups of left-wingers totin' semi-automatic rifles, strolling down the sidewalk, I figured I would follow them and record this odd phenomenon via Facebook Live.

She also asked me to stop filming. And I told her I wasn't going to do that, because we were on public property.

As I walked next to them, we would encounter obstacles, like parked cars, and so forth, and I mostly would go around the other side of the obstacle, and then catch back up with the group.

But at one point, I walked next to a dude in a yellow headscarf, whom I'd tried to talk with before, and I brushed against him, unintentionally.

I didn't think much of it, as the sidewalk is only so big, but he apparently took offense, because in retaliation, he walked backwards into me, pushing me aside.

This is the sort of thing that I would normally expect from the right-wing militia-types, but, in reality, the group was little more than an ad hoc left-wing militia. So I shouldn't have been surprised.

Needless to say, this ticked me off and my language was a tad salty. Eventually, the group stopped, and a guy in sunglasses demanded to see my credentials.

I told him I was with Phoenix New Times, but I wasn't going to show him anything unless he identified himself to me.

He would not do this, and the conversation went back and forth, with him asking me to stop filming and leave, and me informing him that we're in a public place and I'm not going anywhere.

"I'm just going to warn you that we're not responsible for anything that might happen to that phone," he told me, meaning the phone I was holding.

The spokeswoman approached, justifying their request that I not film because they were "trying to protect the safety and identity of our members."

Since many were hiding their faces already, I didn't see this as much of an issue. But I informed her that we live in a free society and that means, when you are demonstrating in a public place, the press gets to film you.

Amusingly, a couple of them were filming me with their iPhones as I filmed them. The spokeswoman then raised a new issue: They did not want me to follow them to their cars and film their cars.

After some more back and forth, they told me that their real concern was that I might film their license plates and that's the reason they were acting this way.

Till this point, filming their license plates hadn't occurred to me. Nevertheless, I told them it was a dumb request because they were likely parked in public spaces, and I could almost guarantee that the cops had all of their info. So why worry about me?

Plus, a license plate is supposed to be in plain view. It is not "private" information. You display it on your car, for Chrissakes.

By the way, I did the same thing to the Arizona Liberty Guard at the March4Trump a couple of weeks ago. I followed them, watched them get into their Army surplus trucks, and filmed them until they drove away.

While I was talking to a handful of the lefties, some ran off, got their cars, and came back to pick up their comrades from the south side of Adams Street.

These progressive goons with guns tried to block me, but I did film some them driving away. The denouement of this encounter was especially ludicrous, as you will see if you watch the video that I have posted.

All apologies for my fumbling with my iPhone at the end. When the sun is beaming down on you, it's somewhat difficult to find the "Finish" button.

I made a comment on the video that this entire event proved that the far left can be as hostile to the First Amendment as the far right.

And that's coming from a big, fat liberal.

In hindsight, it occurs to me that if a left-wing militia and a right-wing militia, such as the ALG, cross paths at an future demonstration, there very easily could be bloodshed.

Both sides are loaded for bear. And I get the feeling both sides can rationalize their behavior after the fact, even if it comes down to killing someone.

I'm reminded of the 1979 shootout in Greensboro, North Carolina, when a "Death to the Klan" rally held by the Communist Workers Party was crashed by Klan and Nazi members.

Five people lost their lives, four of them CWP members.

It may be just a matter of time before history repeats itself.

However, this being Arizona, there's a lot more firepower on both sides, and I suspect, if it goes down, the body count will be higher.