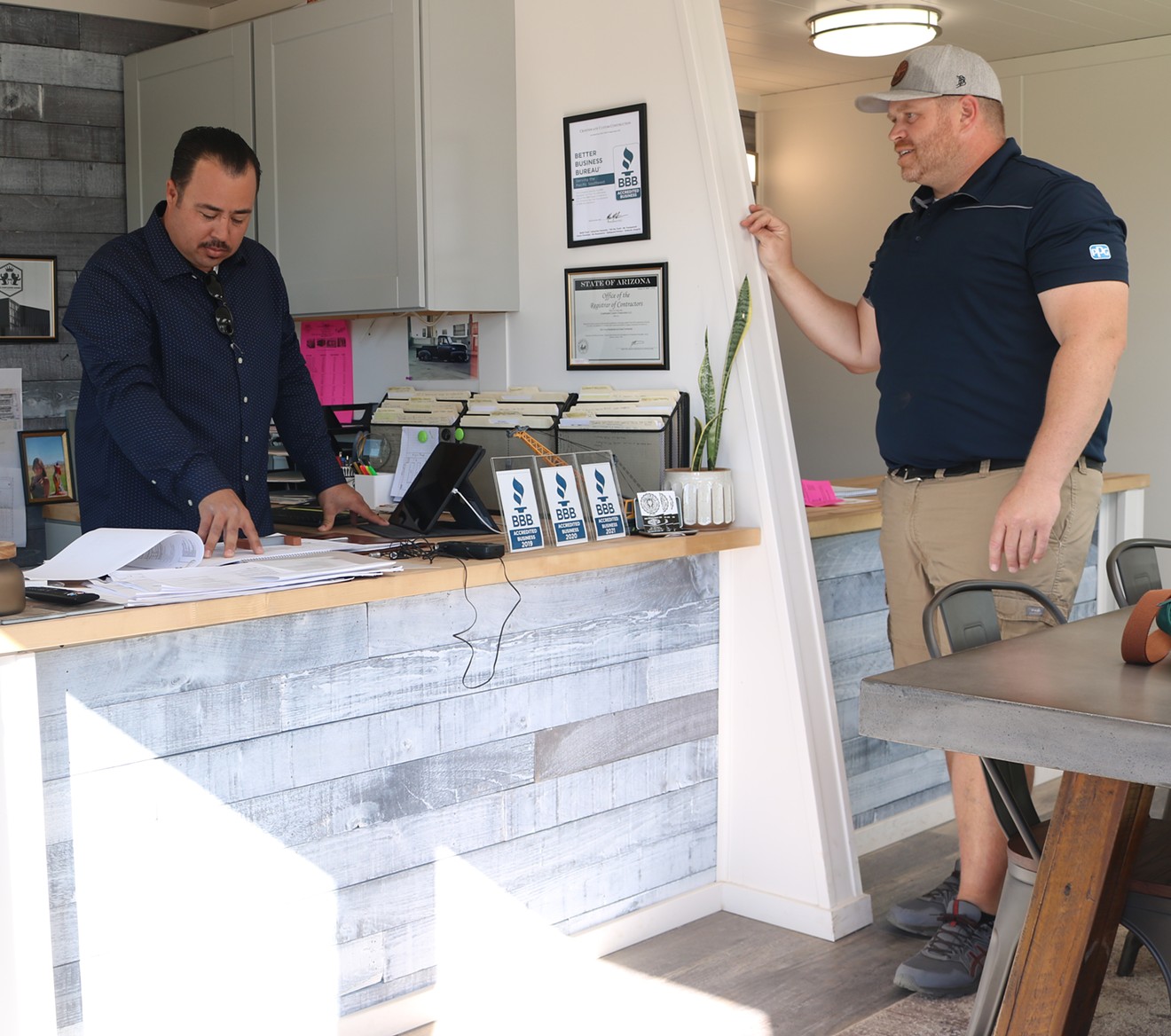 Luke Crosthwaite (left) and Josh Bleak (right), discuss plans for Crosthwaite Custom Construction shipping container apartments in Apache Junction. Mike Madriaga
When the cost of a single-family home hewn from wood and traditional construction materials is out of reach for many low-income Phoenix residents, and hell, some middle-income earners too — the concept of what constitutes a suitable house is likely to change.

And some residents might be more willing to live in tiny apartments under 500 square feet, even used shipping containers.

At least that's what Mesa-based homebuilder Luke Crosthwaite, who is sitting on a sandy lot of two dozen used shipping containers is banking on will happen as Arizona residents are looking for alternatives to a crushing housing market for both home purchases and rentals alike.

The owners of Crosthwaite Custom Construction have been collecting a "monster garage" of tiny container homes in Apache Junction on the site of All-Star Storage.

The company is under contract with a local housing developer to deliver by truck an entire apartment complex made of old shipping containers to the 900 block of East Jones Avenue in Phoenix by the end of May.

Low-income renters could snap up the apartments for $1,000 a month each, but when government assistance is applied to the rent, individuals would pay $300 a month out of pocket.

The project in South Phoenix, 927 Jones Apartments LLC, is owned by Steve Villarreal, city planning documents show. It was not immediately clear how much the development cost to construct or if there were any outside investors.

Villarreal told Phoenix New Times that the project was just an idea a few years ago and "now it's coming to fruition."

While some affordable housing projects in Arizona are public-private partnerships with government entities such as the city of Phoenix, this development is not, according to city records.

Individuals can apply to live at the new apartment complex by sending an email to [email protected] but income restrictions could apply, according to the construction company.

The U.S. Department of Housing and Urban Development, otherwise known as HUD, does coordinate with privately-owned apartment complexes which allow Section 8 voucher holders to choose where they reside as long as the landlord has the proper documentation to accept such vouchers as payment. Individuals who participate in the city of Phoenix's Housing Choice Voucher program funded by HUD pay at least 30 percent of their income toward monthly rent and then the program money can be used to pay the remaining balance. 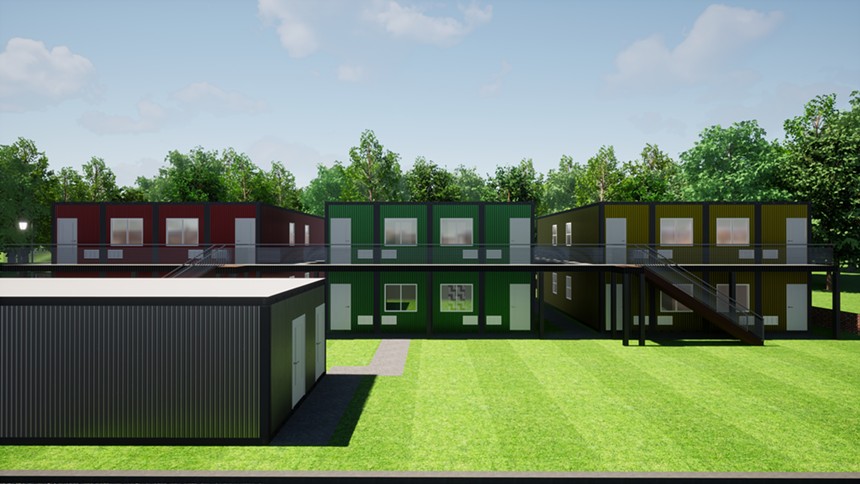 During a recent tour of the apartments under development, the construction company's leadership explained the vision.

"So this will be a downstairs unit, and it's made out of four 40-foot long by 8-foot wide shipping containers," said Josh Bleak, co-founder of the construction company. "There will be four apartment units on each floor; each unit will be 320 square feet."

"Josh is the Harley to my Davidson," Crosthwaite quipped, then the two laughed.

But there's nothing funny about the business model the two have been formulating and blueprinting since early last year.

The project is expected to have water, power, and fire sprinkler lines by Memorial Day. 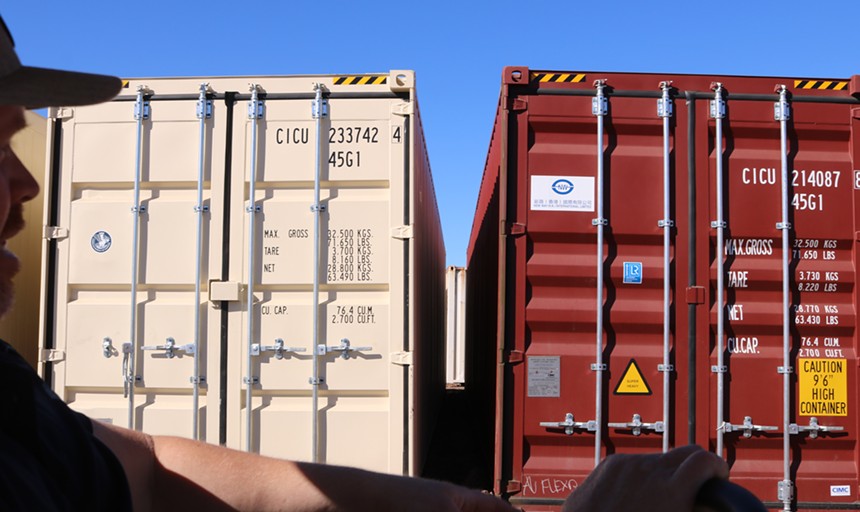 The recycled homes or apartments are predominantly made with used containers fresh off sea-worthy vessels. Some builders prefer new containers — referred to as 'one trip containers' in the estimated $150 billion shipping industry, according to a Fortune Daily report — as they were likely shipped from China to the U.S., then immediately put aside to be transformed into homes.

Advocates argue that recycled shipping containers retrofitted into tiny homes are an environmentally friendly alternative to chopping down trees or even sourcing new metal for construction.


"We build pretty much anything out of steel," said Luke Crosthwaite, owner of Crosthwaite Custom Construction.

Some corrugated metal walls are likely to show oxidation as metal is exposed to the elements for years. And several containers hail from the Port of Long Beach after being sailed across the Pacific Ocean from factories in China.

The contractor used a plasma cutter to chop out the walls allowing space for new doors and windows.

"So anytime we make any type of cut or penetration, we go back in with a full steel tube frame so that there's no sag or there's no compromising the overall structure," Bleak said.

The original weather-tight cargo doors that swung open at the end of each container were removed; the doors, along with their cam and lock system, will probably be retrofitted onto future loft or modern-home projects.

"We build pretty much anything out of steel. We've done planters, fencing, turn them horizontally and can be made into awning covers — and the signage for the complex," Crosthwaite said.

Shipping container homes are generally smaller than traditional homes and can be transported easily. Around the beginning of May, the bottom section of the apartments will be loaded onto individual trailers, then hauled using a truck along Highway 60 for about 35 miles. 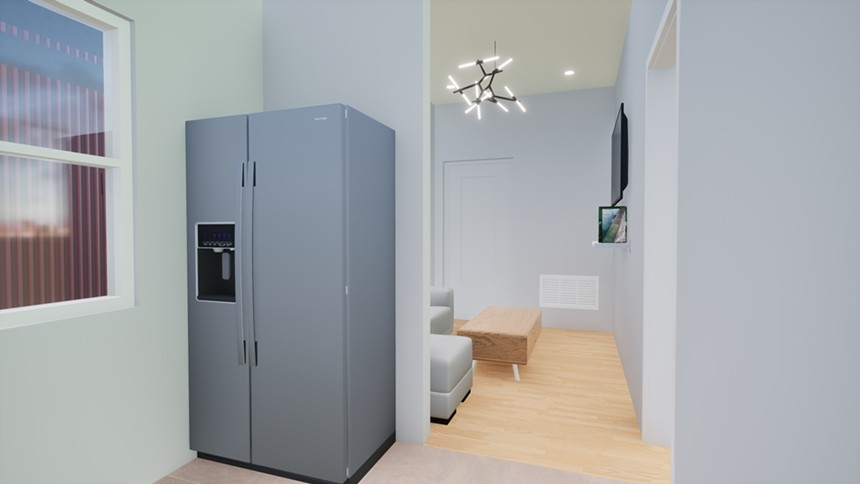 Low-income renters could snap up the apartments for $1,000 a month each, but when government assistance is applied to the rent, individuals would pay $300 out of pocket.
Crosthwaite Custom Construction

The multi-family complex in South Phoenix will be two stories high and each unit is no larger than 320 square feet, which means it's a tiny apartment.

"The idea was you're going to have a TV and a small sofa in here," Bleak said. "Then, this area represents your kitchen, so there'll be a kitchen island here, a refrigerator, and then your cooking area. This kitchen and living room area is half of the build."

The company uses a 'vapor barrier' so it "doesn't sweat like a can" in the desert heat, Bleak said. 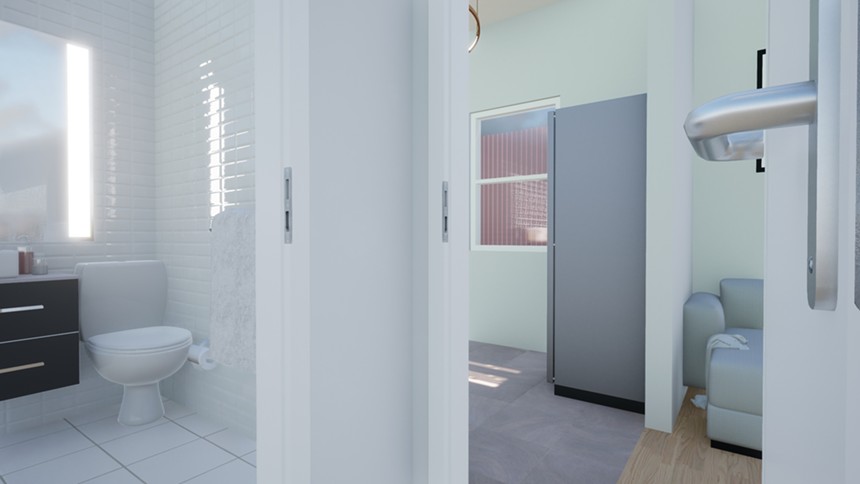 The company is under contract to deliver using a truck an entire apartment complex made of old shipping containers to the 900 block of East Jones Avenue in Phoenix by the end of May.
Crosthwaite Custom Construction

Next, electricians routed the wires from behind the front doors where the panel boards will be mounted, then along with the underbellies of the drywall and ceilings. Next, plumbers laid the piping, and Contractor Fire Protection & Backflow Services from Mesa installed the fire sprinkler system. Additionally, each apartment will have an air condition unit which the team will install on-site.

There are two standard heights in the shipping container industry, roughly 8 feet high or 9 feet high.

One environmental downside when constructing shipping container homes is tied to wood flooring since many contain pesticides used to protect the wood from critters when traveling in the ocean.

There are plates mounted on the outside of the container — similar to a plate mounted in a vehicle's doorjamb — that read 'timber component treatment,' followed by how and when the floor was treated.

"For the pesticide, it can either be sealed off or completely removed," Crosthwaite said. "We typically seal it completely off. There is no possible way human beings could contact anything toxic from a container we build. Also, there are extensive compliance manuals by the Arizona Department of Housing that we have to adhere to."

The duo also added doors in the middle to make the apartments one-bedroom units rather than studios.

Before the pair began collaborating in 2020 — since 2006, Bleak's family bought, sold, leased, and customized shipping containers. 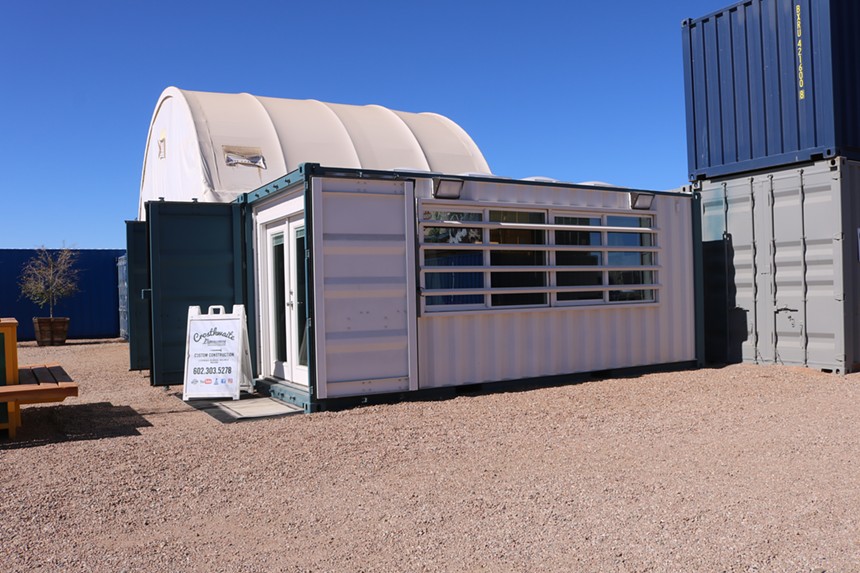 
Crosthwaite has more than 20 years of experience in construction, although his passion is more along the ornate side of the design spectrum.

"The first thing people ask us is: "Can we get a permit on these?" Crosthwaite said. "Absolutely, you can." 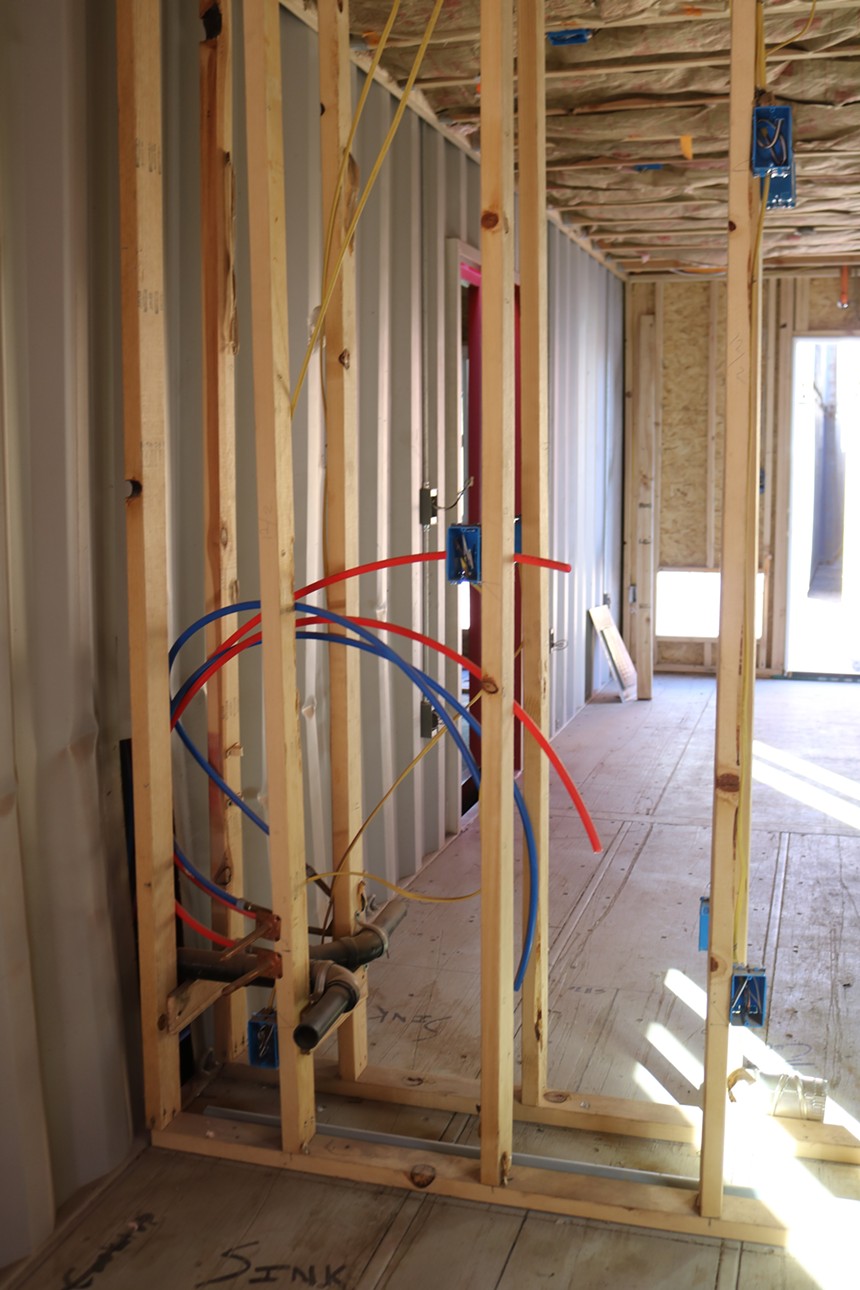 Exposed wooden frames can be seen before the walls of the tiny home apartments are built.
Mike Madriaga


"A very savvy developer from the East Coast," is a partner in the project through the company declined to name the individual for this story.

"He moved here and was having a hard time finding anybody that could get on his level conceptually, then he saw the builds on the website and called me," Crosthwaite said. 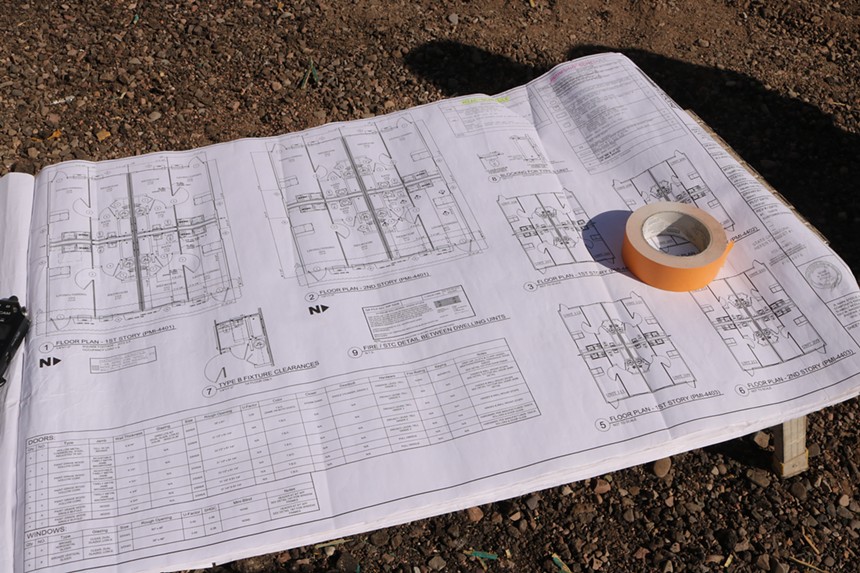 "Typically in that kind of project, we would also sell him the containers, but he bought them used from Long Beach like five years ago and was just sitting on them," Bleak said. "He bought those for probably $2,500 apiece back then; now, a new 40 footer is nine grand. Since the pandemic started, container prices have risen 50 to 100 percent. Shipping those containers from Long Beach to [Arizona] cost between $1,000 to $1,500 per unit."

It should take about seven years to recoup the investment at $1,000 per month with minimal upgrades or repairs required.

At $1,000 rent, it's still $295 below the median rent for 1-bedroom apartments in the same area, according to Zumper.com data.

The existing projects are the Containers on Grand, The Oscar, and The Churchill, all of which are considered "high-end" projects.

"The first two are fully occupied apartments, and the latter is a commercial development. A fourth project is under development," Toll said. 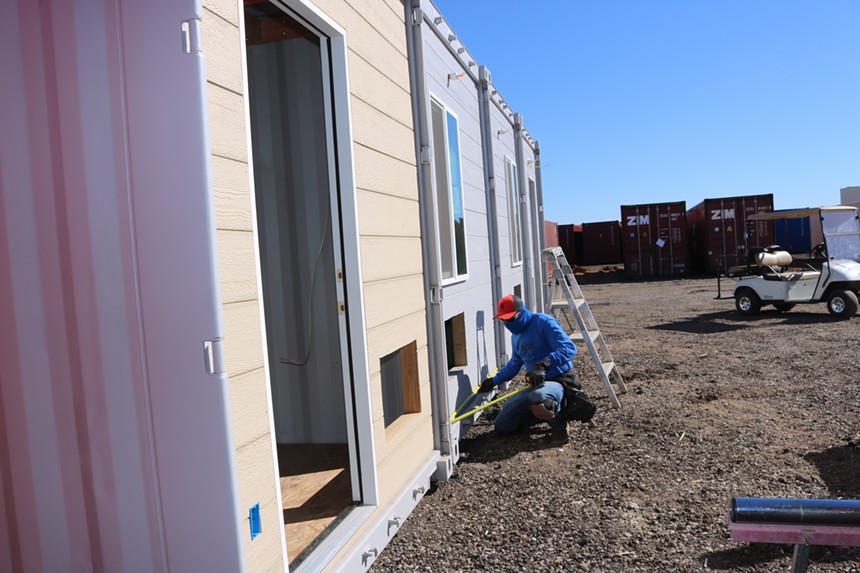 A worker is measuring material for The Jones Apartments, recycled shipping container homes built by Crosthwaite Custom Construction in Phoenix, Arizona.
Mike Madriaga
Because the pair in Apache Junction is utilizing steel from shipping containers as a structural shell, they save up to “75 percent” of the lumber needed in traditional construction, eliminating the usage of wooden floor joists, exterior sheeting, truss systems, and other wooden components.

How long will they last?

"With the right paint maintenance, 1000 years here in Arizona because of our climate," Crosthwaite said. "It'll outlive us for sure, and we'll have something to be remembered by."
KEEP PHOENIX NEW TIMES FREE... Since we started Phoenix New Times, it has been defined as the free, independent voice of Phoenix, and we'd like to keep it that way. With local media under siege, it's more important than ever for us to rally support behind funding our local journalism. You can help by participating in our "I Support" program, allowing us to keep offering readers access to our incisive coverage of local news, food and culture with no paywalls.
Make a one-time donation today for as little as $1.