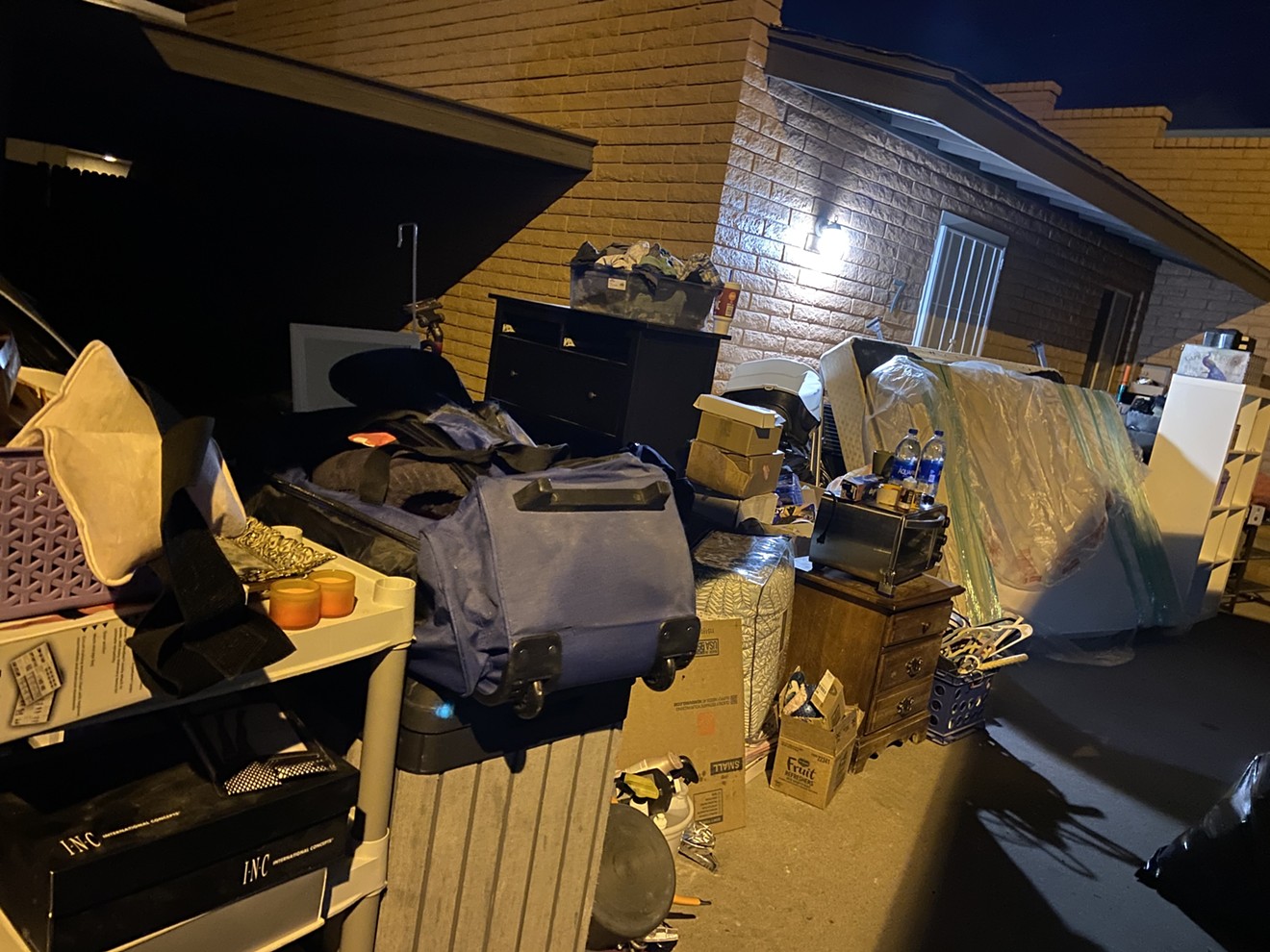 Phoenix resident Jennifer Gosnell took a photo of her belongings outside after she was evicted in December 2021. Jennifer Gosnell
Nearly two years ago, Maricopa County landlords were already trying to evict their renters at a steady clip, leading to one of the highest eviction rates in the nation.

That was before the coronavirus pandemic swept across the country, sickening millions and prompting economic lockdowns for public health and safety.

In January, landlords filed documentation for 5,213 people to be evicted from their rental properties — an 18 percent increase over the previous month.

The number of eviction filings stands 60 percent higher than the same month a year ago when a federal moratorium on evictions was in effect.

Local officials have touted the widespread availability of coronavirus pandemic-related rental relief. And such support has saved some from losing their homes.

But it can take a long time for the assistance to be disbursed to those who need it.

Phoenix resident Jennifer Gosnell was evicted in December 2021, two months after submitting her second application for rental relief funds from the city.

Gosnell was approved for rental assistance in July 2021 for rent incurred between January and October, according to the city of Phoenix.

But she fell behind again in November and was out in the cold by December before more aid could arrive.

Advocates claim that's because the federal government required all applications to be treated on a first come first serve basis and didn't enable administrators to prioritize people who needed more help to avoid being evicted.

Gosnell, who is in her late 30s, had lived in her former apartment complex in West Phoenix, the Collins, for four years. But her income dried up when the coronavirus pandemic hit, and she was never able to fully recover, she said. In December, her landlord filed eviction paperwork, giving her only days to move out.

Now, Gosnell is living with her boyfriend temporarily and hopes that her rental assistance application will eventually be approved. But even if it is, she worries that few apartments would rent to her, given the eviction on her record.

“It’s been nothing short of horrific,” she said.

Kristen Couturier, a public information officer with the city of Phoenix, confirmed that Gosnell had been waiting since December for a motion on her second application.

Couturier said that if Gosnell were facing an eviction crisis, “she can communicate that to the city and we will be able to schedule her for an appointment right away.”

But for Gosnell, it was too late in the process.

There were 50 percent fewer evictions in Maricopa County in 2020 because there was a federal ban.


Even since the moratorium was lifted, back in August 2021, eviction filings have remained relatively low compared to historic trends, data shows.

“Not since February 2020 have we seen more than 5,000 filings in one month as we just did,” Scott Davis, public information officer for the justice courts, wrote in an email on Tuesday.

Although the numbers suggest that evictions are slowly approaching pre-pandemic levels, they still remain down from years prior.

Davis said that resources remain available for tenants facing eviction — largely in the form of federal COVID-19 dollars that cities and counties have been disbursing as rental assistance.

As of January 27, the city of Phoenix had disbursed $65 million in emergency rental assistance dollars since the program began in March 2020.

Until the end of December 2021, Wildfire AZ, a local community group, had been helping the city distribute the relief funds. Their contract with the city has now ended, so the remaining money will back into the hands of the city’s human services department.

Kelly McGowan, deputy director of Wildfire, said that this winter the city was still receiving many first-time applications for rent relief, with little sign of such a trend waning.

“There has been a pretty consistent influx of applications,” she said.

“Rental prices are skyrocketing,” she said. “I think you’re just going to see a continuation.”

McGowan emphasized the significant impact that the rise in evictions represents. “An eviction is a really traumatic event,” she said, and one that can lead to “rippling consequences” throughout a person’s life.

It was disheartening, she added, to see the crisis deepen even after the number of federal resources that cities and counties had been working to get to renters.

“I don’t think anybody would have predicted that we would still be navigating the pandemic in this way,” she said.

This story has been updated to accurately reflect how many times one applicant applied for housing aid.
KEEP PHOENIX NEW TIMES FREE... Since we started Phoenix New Times, it has been defined as the free, independent voice of Phoenix, and we'd like to keep it that way. With local media under siege, it's more important than ever for us to rally support behind funding our local journalism. You can help by participating in our "I Support" program, allowing us to keep offering readers access to our incisive coverage of local news, food and culture with no paywalls.
Make a one-time donation today for as little as $1.