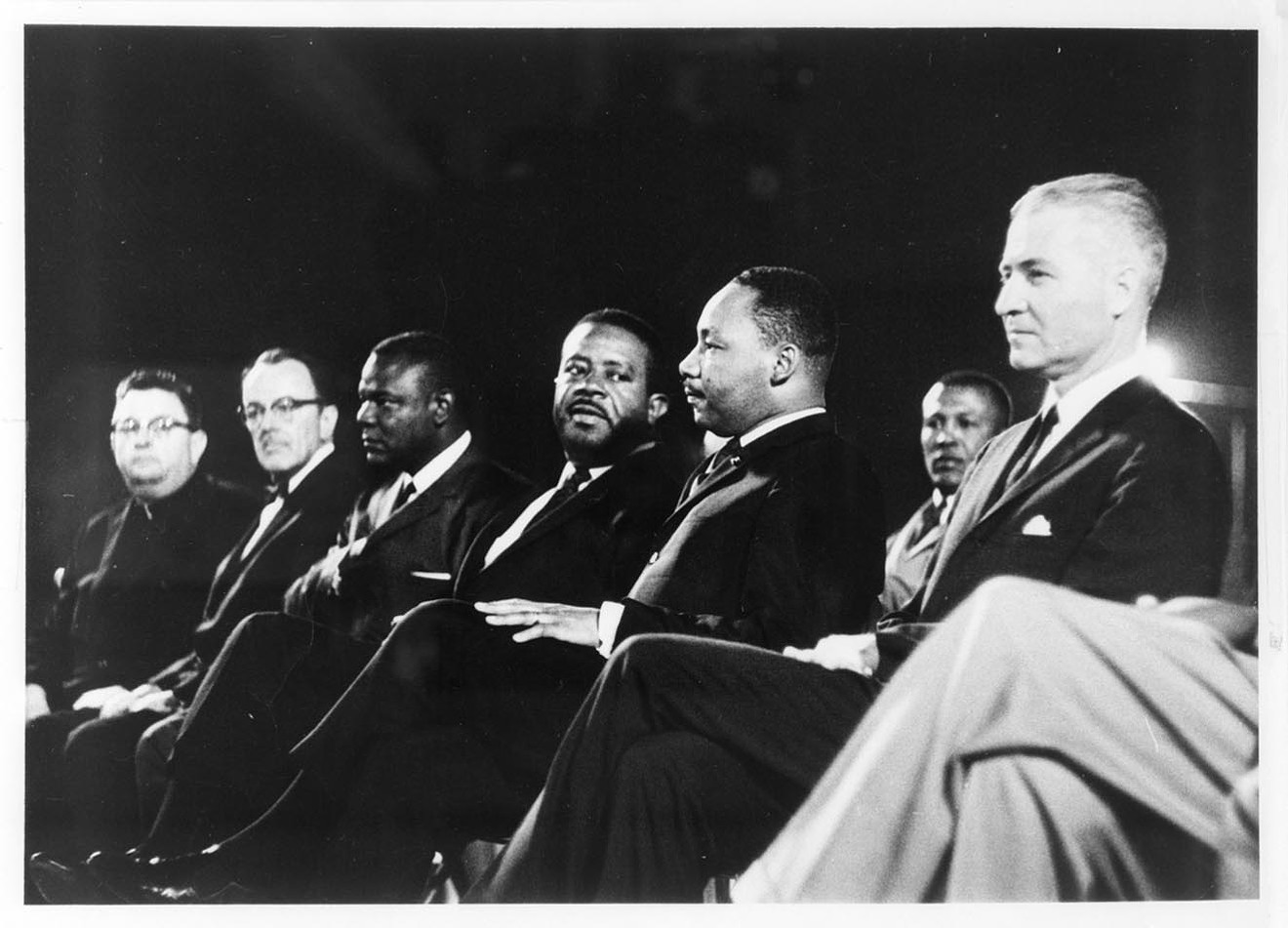 King Jr. pushed for the passage of the federal Civil Rights Act  — stuck in a U.S. Senate filibuster at the time.

"If it does not pass, and pass soon, it may well be that the already ugly soot of racial injustice on the body politic will suddenly turn malignant, and our nation will be inflicted with an incurable cancer that will totally destroy our moral and political health," King Jr. said that day.

But the audio recording of that speech, King Jr.'s only public address in Arizona, was just a memory in the minds of the 8,000 attendees until 2013.

That's when a local resident discovered the reel-to-reel tapes of King inside Godwin Stadium at Arizona State University laying on a Phoenix Goodwill store shelf on sale for $3.

The audio, donated to the thrift store as part of the Lincoln Ragsdale Sr. estate, was released to the public in 2014 but there was little fanfare at the time. Ragsdale Sr. was a local civil rights leader of his own right, business owner, and Tuskegee Airman who died in 1995 and advocated for equality alongside King during his life.

Now, Senator Kyrsten Sinema is effectively blocking the potential passage of the Freedom to Vote and John Lewis Voting Rights Advancement Acts in the U.S. Senate by refusing to change federal filibuster rules. Sinema staunchly denies that she is against the voting rights bills on the floor.

Decades after King's lone foray to Arizona, on what would have been King's 93rd birthday, his descendants gathered in Phoenix this week to advocate for those federal voting rights bills unlikely to move forward because of Arizona politics — once again.

“Voting is an essential part of our democracy's infrastructure, and we cannot afford for it to crumble any further," Arndrea Waters King said.

The civil rights leader and famous orator was invited by the Maricopa County chapter of the NAACP and introduced by then-president G. Homer Durham of ASU. Racial segregation was rampant in schools, workplaces, and neighborhoods across the state for decades.

Phoenix native Frederick H. Warren — the eldest of six children — was a young elementary school teacher at the time of King's speech, which he faintly remembers attending more than 50 years ago. Warren, now 85, is a retired local school superintendent who lives in Tempe is the former president of the Black history museum in the area, the George Washington Carver Museum and Cultural Center.

Warren went to Booker T. Washington Elementary School (where Phoenix New Times has an office) then later Carver High School and his grandmother had the first Black-owned pharmacy across the road along Jefferson Street. Warren is a graduate of ASU and later worked there as an adjunct faculty member. He also holds a law degree from Pepperdine University and retired from the Roosevelt School District in 2003.

The stadium was where his uncle Morrison Warren played football for ASU and was later the first Black man to serve on the Phoenix City Council. Morrison Warren died in 2002.

Before the 1960s, Black people were not allowed to eat at the lunch counters of Woolworth or other restaurants, and the movie theaters had a section in the balcony for Black moviegoers, Frederick Warren said. There were whites-only motels and even hospitals at the time. The neighborhood boundaries between white folks and Black folks were along Van Buren Street to Madison and from the Second to 18th streets.

That year was pivotal in Phoenix's history, Warren said.

"There were changes taking place in Phoenix, several neighborhoods had opened up to Blacks to buy homes," he said. "A reform group had a slate of city council candidates and won the election."

During King's speech, he referred to technological advances in America of a jet plane that could take passengers around the world in record time. Those scientific milestones brought people closer together from different communities. So why shouldn't a world so much more connected be able to treat everyone with respect and dignity, he queried.

"Through our scientific and technological genius, we have made of this world a neighborhood. And now through our moral and ethical commitment, we must make of it a brotherhood," King said. "We must all learn to live together as brothers or we will all perish together as fools."

King Jr. told the crowd he was suffering from a "virus bug" and his voice was hoarse from so many speeches as he traveled along the West Coast.

"We are challenged to get rid of the notion once and for all, that there are superior and inferior races," King said. "There is a need for strong civil rights legislation now. And the federal scale and on the local scale in states all over the nation. That is a debate taking place right now, in the Senate, and it is more than a legitimate debate. It is bogged down now into an actual filibuster and this is tragic for the nation. It is tragic for the cause of justice, and for democracy. I think one of the most urgent issues facing America now is to get this Civil Rights Bill through."

Months later, Goldwater lost his presidential bid against Lyndon Johnson. King said in July 1964 that Goldwater "threatens the health, morality, and survival of our nation" and that he would not endorse his candidacy for president. Likewise, Sinema has been put on notice by progressive organizations which supported her.

Warren noted that the political sands nationwide are shifting to the right.

"It seems to me that there's been an effort to reverse the few gains we've made over the years in terms of civil rights," he said. "I'm not sure we are going in the right direction. The issues remain the same. We ought to be focused on structural racism and narrowing the wealth gap, trying to work closer together. I'm not sure the government is doing that. I don't know if it's going to happen in my lifetime."

It was a surprise to ASU professors and library archivists who got the call from then-Phoenix-area resident Mary Scanlon about her discovery while hunting for records at the 32nd Street and Thomas Road Goodwill several years ago.

"It was amazing to me that the recording lasted that long and the tape didn't deteriorate," said Keith Miller, an ASU English professor who has written books about Martin Luther King Jr.. "King was very controversial and Barry Goldwater was running for president. (The ASU president) was bold by inviting King to come."

Scanlon said she almost didn't buy that audiotape but then noticed a reference to MLK and Tempe.

"Nobody knew this existed," said Scanlon, a graphic designer who now lives in Seattle.

The 60-year-old would have been a toddler living along the Arizona border with Mexico. She and her parents lived in a conservative mining town of Douglas hundreds of miles away from the speech in Phoenix.

Perhaps this memory of the flicker for civil rights was purposefully forgotten.

In 1987, then-Governor Evan Mecham rescinded the Martin Luther King Jr. holiday after being observed once in 1986. It wasn't until 1992 voters approved MLK to be recognized in Arizona.

"It brought tears to my eyes to kind of rescue this piece of history," Scanlon said. "If I hadn't picked up that one (and nobody else bought it at Goodwill) they probably would have thrown it away."
KEEP PHOENIX NEW TIMES FREE... Since we started Phoenix New Times, it has been defined as the free, independent voice of Phoenix, and we'd like to keep it that way. With local media under siege, it's more important than ever for us to rally support behind funding our local journalism. You can help by participating in our "I Support" program, allowing us to keep offering readers access to our incisive coverage of local news, food and culture with no paywalls.
Make a one-time donation today for as little as $1.
Kristen Mosbrucker is the news editor of Phoenix New Times. Mosbrucker is a journalist who hails from the Northeast but has spent much of her career over the past decade across the South. She has interviewed everyone from business executives to homeless folks. She's covered business on the Texas-Mexico border in deep South Texas for the McAllen Monitor, technology and the defense industry in San Antonio for American City Business Journals, and the petrochemical industry in Louisiana for The Advocate newspaper. Early in her career, she spearheaded hyperlocal community news coverage for an NPR member station in Philadelphia.
Contact: Kristen Mosbrucker
Follow:
Twitter: @k_mosbrucker