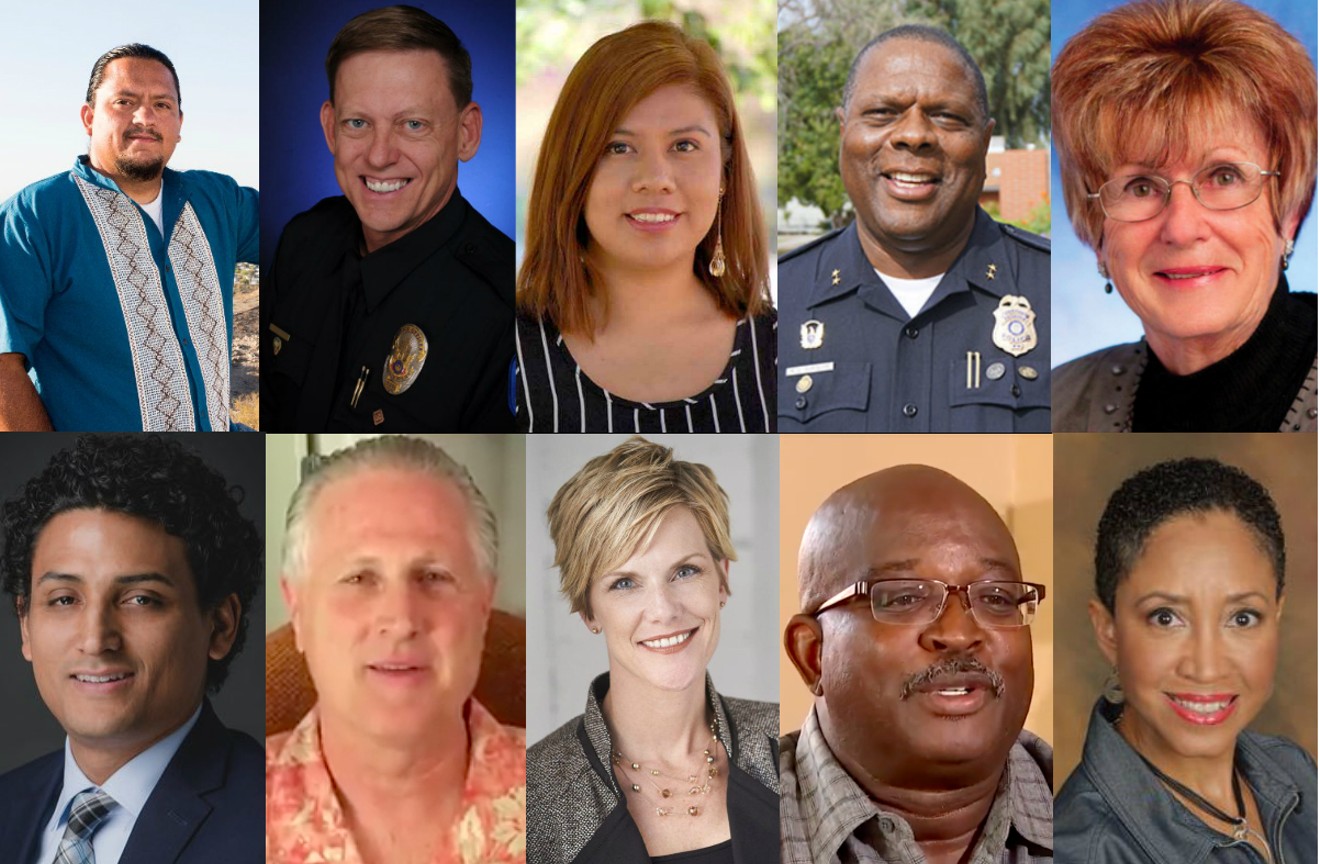 In June, news that 97 current and former Phoenix police officers had shared racist posts on Facebook was quickly followed with a viral video of a Phoenix police officer threatening to shoot an unarmed black man in the head in front of his family. The footage brought a national spotlight to Phoenix's troubled police department and ignited public outcry. Then last week, an Arizona Republic investigation found 525 Phoenix police officers have removed disciplinary records from their personnel files under a practice allowed by the department, which permits officers to destroy misconduct records after three years.

The 19-member committee, chaired by City Council members Thelda Williams and Carlos Garcia, is tasked with reviewing past and current recommendations made to the City Council and Phoenix Police Department "related to strengthening the department and the relationship between the community and public safety officers," said Mayor Kate Gallego yesterday in her brief introductory remarks to the committee.

The committee will meet monthly and conclude in June 2020. During that time, committee members will review past reports and make new recommendations on reforms to be implemented by the department. Some of the information to be reviewed by committee members is outlined below.

The first meeting was more of an introductory one. Gallego and Phoenix Police Chief Jeri Williams stopped by briefly to thank the committee for their work. Committee members introduced themselves and talked about the unique perspective each brought to the committee.

Then, the 15 committee members who were present (not including Thelda Williams and Garcia) broke off into smaller groups to discuss four questions:

1. Based on wherever you think the police department is currently, what do you think a higher level of transparency would look like?

2. Phoenix, like cities across the country, is struggling to combat the challenge of homelessness. Do you think there are additional ways that Phoenix PD could help address this challenge?

3. What are some things/roles that the public can play to advance police-community relations?

4. If you were asked to speak to a group that was considering becoming police officers, what are three characteristics you would tell them they needed to have to be a good officer? Breakout group at the ad hoc committee on police reform
Meg O'Connor
As Phoenix New Times previously reported, the divergent makeup of the committee may make it difficult to achieve any meaningful reform. At the meeting Thursday, several committee members acknowledged that their differing perspectives may make for difficult conversations.

"I'm appreciating the acknowledgment that there will be some conflict," said Shawn Pearson, founder of the Zion Early Learning Academy, "but we are all committed to being a part of the healing process, so the shame and the blame and the accusations and all of those things that will disrupt our ability to find solutions, I hope we can put that aside."

Gallego appointed nine members to the committee and directed each of Phoenix's eight City Council members to select their own appointees.

Vice Mayor Jim Waring chose to add former Phoenix police union president Ken Crane to the police reform committee and Council member Sal DiCiccio added former Apache Junction police commander Jay Swart. In 2006, the East Valley Tribune found that Swart had left his previous role as captain at the Capitol Police Department, a small unit of the state Department of Public Safety, amid allegations that he routinely humiliated fellow officers and employees, retaliated against people who "crossed" him, repeatedly made illegal arrests, and put homeless people in jail for no reason.

Council member Debra Stark added Cleo Lewis, a former Phoenix police officer who was fired in the early 1990s, and one of Gallego's appointees, Kevin Robinson, recently retired from his role as assistant chief at the Phoenix Police Department and now works as a lecturer at the Arizona State University School of Criminology and Criminal Justice.

On the opposite end of the spectrum, Council member Laura Pastor appointed Viri Hernandez, director of Poder in Action and an outspoken police reform activist, and Garcia chose to add Jamaar Williams, an activist, attorney, and member of the National Lawyers Guild. The other three council appointees are ASU student and field organizer with NextGen America Victoria Stah, and neighborhood block watch members Stan Bates and Jennifer Rouse.

Gallego's other appointees include active members of the community, health care professionals, a pastor, and a criminal defense attorney.

Throughout the meeting, city employees jotted down notes from the breakout groups onto large notepads. Suggestions to improve police transparency from Janelle Wood, founder of the Black Mothers Forum, Pastor Aubrey Barnwell, Swart, and Bates included making the Phoenix police department's website more user-friendly, with more helpful information, and putting a time limit on how long the police department has to disseminate information when it is requested.

The next meeting is September 19.
KEEP PHOENIX NEW TIMES FREE... Since we started Phoenix New Times, it has been defined as the free, independent voice of Phoenix, and we'd like to keep it that way. With local media under siege, it's more important than ever for us to rally support behind funding our local journalism. You can help by participating in our "I Support" program, allowing us to keep offering readers access to our incisive coverage of local news, food and culture with no paywalls.
Make a one-time donation today for as little as $1.
Meg O'Connor was a staff writer for Phoenix New Times from April 2019 to April 2020.