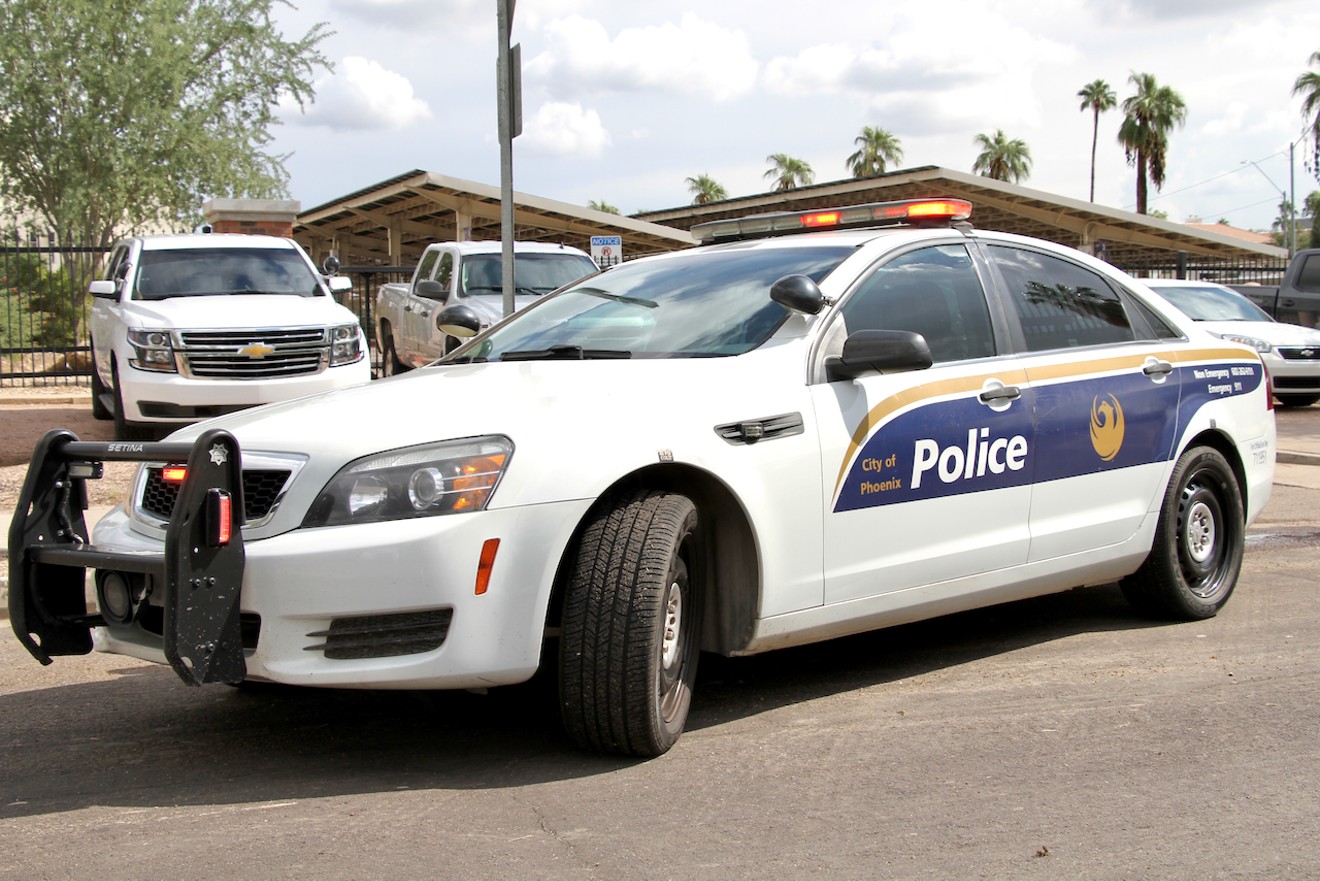 Negotiations between the city and the Phoenix Law Enforcement Association for a new contract for police officers are starting with little public transparency. Matt Hennie
The city of Phoenix will begin negotiating with its police union this week over a new contract — a process that will likely stretch into the spring.

The new contract will apply to the city's 2,800 police officers and govern wages, benefits, and discipline while shaping the power and practices of the embattled Phoenix Police Department.

But unlike in years past, the negotiations have started in secrecy.

For years, the Phoenix Law Enforcement Association submitted a draft contract to the city weeks before bargaining began, allowing the public — and the union — to comment on the proposal. This time, though, the union didn't do so — nor did any of the other four unions seeking new contracts with the city. Bargaining with all the unions is set to begin this week, city spokesperson Vielka Miller confirmed.

The public will likely have to wait until April or May for a glimpse of the police contract and PLEA's proposals. But by that point, the city and the union will have agreed on a contract and will be awaiting a stamp of approval from the Phoenix City Council.

Activists have been calling for greater transparency in negotiations with the police, particularly given the ongoing probe by the U.S. Department of Justice into the agency. "Why is this happening while the police department is under investigation by the Department of Justice?" said Shalae Flores, a spokesperson for Poder in Action, which advocates for criminal justice reforms. "If anything, the city should be even more vigilant in this process." 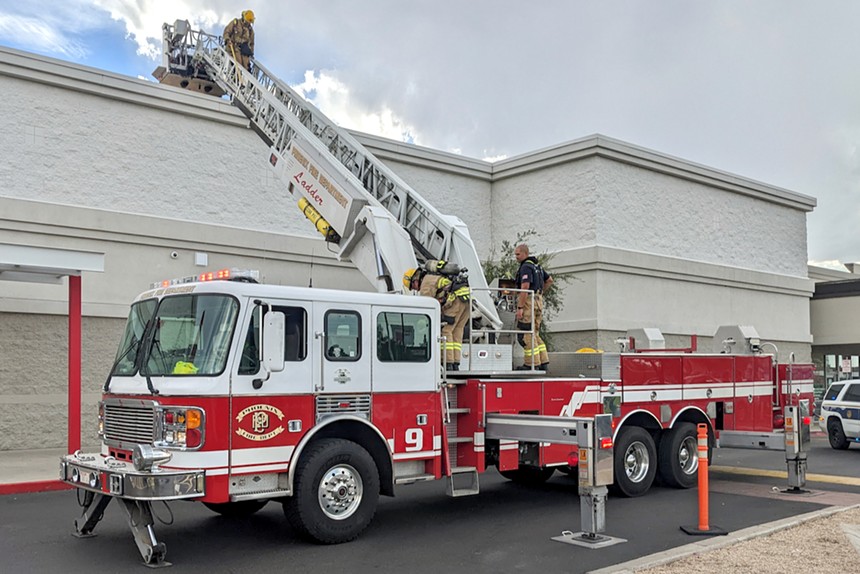 Two unions for Phoenix firefighters are among five for municipal employees negotiating with the city for new contracts.
Matt Hennie

A Change from Past Years

Phoenix city code requires that unions "submit their proposed memorandum of understanding (MOU) in writing to the city manager" weeks before bargaining begins. Then the public is given an opportunity to comment on the proposed new contracts before the city and the unions begin to meet behind closed doors, according to the code.

But this year, all the unions only submitted a brief letter to the city indicating that they intended to begin negotiations in January. Some of the unions gave an overview of their major priorities in the letter, but the police union did not.

PLEA has presented at least some of its proposals to the public dating back to at least 2007, though records were not available for 2009, according to a review by Phoenix New Times. Sometimes, PLEA was the only union to do so.

Joe Clure, who served as PLEA president from 2011 to 2015 and is now the executive director of the Arizona Police Association, said when he served as a negotiator, it was standard practice to submit a draft contract for public review. "That just was what we chose to do," he said.

Clure said he couldn't speculate on why PLEA broke from that tradition this year. "I can only tell you that the history has been that the other associations only submitted a letter of intent to bargain" — and not the draft contract, he said. He questioned why the police union was facing scrutiny when it simply adopted the same practice as the other unions.

"Why do you think [American Federation of State, County and Municipal Employees] and the fire union and all the others weren't submitting their contracts? Do you think that was transparent?" Clure said.

Flores said the police union warrants a higher level of scrutiny than unions for other public workers. "None of the unions were transparent. But the police union is different from the city unions," Flores said. "They have the power to kill, harass, arrest people, and they're protected in doing that."

PLEA did not reply to questions from New Times. Representatives from all unions, including PLEA, were given a chance to present their proposals to the City Council during its December 7 meeting. None chose to speak.

"The intent of the city code is for each of the groups to present their MOU at this point in the process, today. However, they have elected not to do so," Assistant City Manager LoriBays said.

The city does not appear to have taken any action to ensure that unions do present those contracts, as the city code appears to require. Clure said that if the city wanted the public to comment on the police union's draft contract, it could just ask the union to submit its proposal. "That would solve this," he said. A week later, at the City Council meeting on December 14, the public had a chance to comment on the contracts, but there was nothing to comment on. "It feels extremely awkward opposing a proposal that I didn't even have access to review," Phoenix resident Rebecca Denis said at the hearing.

After several other people voiced their frustrations at the meeting, Bays explained that the public would be able to comment on the contract in April or May after negotiations wrapped up. "We will not have a draft MOU until much later in the process," she said.

Miller reiterated that position in response to questions from New Times about calls for transparency in the process. "The public does have an opportunity to review and comment on the proposed agreement before City Council acts on it," she said.

But activists calling for greater transparency in the negotiations said the proposals from all the unions should be made public now.

"It's really hard to believe that [PLEA] didn't have a proposal ready to go, or at least in the works, by the time of that public meeting," said Ben Laughlin, a researcher and the policy coordinator for Poder in Action.

In the past, the draft proposals allowed the public to speak out earlier in the contract negotiations about aspects that concerned them, Laughlin explained, such as a proposal in 2020 that allowed for disciplinary records to be purged from officers' records. "Community members have been able to speak out, because we were able to see the contract and said, very clearly, 'That's not okay with us,'" Laughlin said.

The last contract, which was approved in 2021, raised wages for officers but also added some new accountability measures, including preventing serious disciplinary records from being wiped away. Phoenix police officers have seen even more wage increases than the ones called for in the contract.
KEEP PHOENIX NEW TIMES FREE... Since we started Phoenix New Times, it has been defined as the free, independent voice of Phoenix, and we'd like to keep it that way. With local media under siege, it's more important than ever for us to rally support behind funding our local journalism. You can help by participating in our "I Support" program, allowing us to keep offering readers access to our incisive coverage of local news, food and culture with no paywalls.
Make a one-time donation today for as little as $1.