In 2018, the city of Phoenix unveiled a new vision for its notoriously dilapidated Edison-Eastlake housing projects. The buildings, left for decades to fall into despair, would be demolished. They'd be replaced with new, mixed-income housing, surrounded by parks and gardens.

As it turns out, though, those projects were built over the heart of one of Phoenix’s largest archaeological sites, occupied centuries ago by the Hohokam people. By the city’s estimates, the ongoing construction could unearth more than 700 Hohokam remains.

Now, some activists are fighting to preserve the graves.

One is Marina Thomas, a member of the Salt River Pima-Maricopa Indian Community and a descendent of the Hohokam. She first shared her concerns with the city of Phoenix in April, explaining that news of the plan was "deeply upsetting to the community" — and that, although the tribe had been consulted on the project, the broader community had not been made aware.

That has changed. Over the last few weeks, Thomas and the advocacy group O'odham Stronghold have been blasting out their message, picking up a great deal of traction along the way. One petition, titled “let our ancestors rest,” has so far collected more than 40,000 signatures, with commenters calling the development a “grave robbery.”

“The O'odham have inhabited the entire Sonoran Desert region since time immemorial,” the petition reads, going on to state that removing the bodies from the ground would disrupt the “very sacred process of the body becoming one with the Earth.”

“I've been feeling really heavy about it,” Thomas told Phoenix New Times. “The city doesn’t want to listen. And the tribe can’t do anything.”

At Edison-Eastlake, the archaeological site lies unmarked — but it forms part of an expansive prehistoric village, called “La Ciudad,” that spans hundreds of acres in eastern Phoenix. Over the decades, La Ciudad has been excavated dozens of times, often to make way for new developments. The Heard Museum's initial collection was made up of artifacts from this site, for instance; its founders, Dwight and Maie Heard, had purchased a parcel of the ruins in the 1920s.

“It’s a huge, massive site,” said James Watson, associate director at the Arizona State Museum, noting that it has been excavated “many, many times.”

In recent years, those excavations have been fairly small. In contrast, the current project, which is stripping back housing projects that have stood since the 1940s, will unearth “a huge swath of the site that I don’t think has been exposed since the initial investigations.”

The project’s impacts on the archaeological site will be “extensive,” according to a treatment plan obtained by Phoenix New Times; at least one parcel is located at the core of the site, and is estimated to contain over a thousand structures — and hundreds of graves. For archaeologists, the plan notes, the site will provide a “unique opportunity” to study Hohokam life and social structures.

Still, such an effort is hardly unusual for the city.

“Truthfully,” Watson said, “the entire city of Phoenix is basically parked on top of one massive Hohokam archaeological site.”

Development projects in Phoenix frequently bulldoze through these ancient sites, which all require similar excavations. Most recently, a demolition project in Tempe uncovered an old Hohokam community center that was buried by a railway.

Typically, though, such excavations are carried out quietly. Agreements drawn up between the city and local tribes often mandate discretion, as was the case in the current Edison-Eastlake project. It is unusual for them to become a matter of public scrutiny — for the city to face opposition over a process that, over the years, has become routine.

In Arizona, state law governs the protocol that must be followed when human remains are found on public land. Any discoveries are reported to the Arizona State Museum, which then must consult with groups who have ties to the burials — in this case, tribal governments. The museum, Watson says, processes dozens of these arrangements each year. 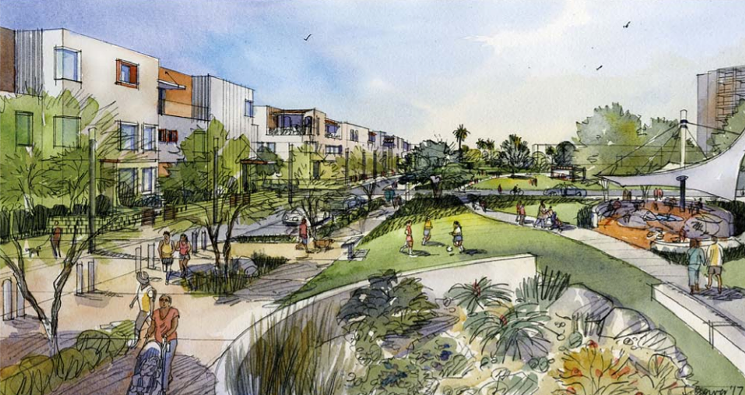 The plans.
City of Phoenix

This protocol, according to the city of Phoenix, was followed in the case of Edison-Eastlake. In a statement, a city spokesperson explained that the city was working “in consultation with all four O’odham communities and 10 other tribes on this project,” providing them “daily updates.” That doesn’t always mean, however, that the broader community is made aware of the work. That would be “incumbent on the tribal entity we work with,” Watson explained.

In cases like this, however, tribes still have little choice on whether their ancestral graves are disturbed. Since 1990, state and federal law have required that any remains and artifacts be repatriated, for observances or for reburial. But consent is not required to disinter the remains. “They have their hands tied,” Thomas said.

“Knowing how development works, I very much doubt that something like this would ever be able to be stopped by a tribe expressing their concern,” Watson said — even though, he emphasized, “these disturbances and destruction and desecration of their ancestral graves," for tribes, "are really painful."

And indeed, despite the outcry, development on the project is continuing. The new Edison-Eastlake plans are, after all, welcome in a neighborhood that the city had neglected for years, leaving buildings to crumble. The new development, funded with a $30 million federal grant, will build several parks, with gardens and walking paths. It will also add 1,000 housing units — including both market-rate and new public housing — at a time when the city is facing a worsening affordable housing shortage. For residents of Edison-Eastlake, the changes are long overdue.

But Thomas says it is difficult to watch the plans take shape without any mention of what lies beneath. When she visited the barren construction site to pray, she said, she "just wanted to look at everything, to sit here and learn from this." Instead, though, there were only signs advertising the vision of the impending development: A "diverse and thriving neighborhood," as one city pamphlet reads, "rich with history."
KEEP PHOENIX NEW TIMES FREE... Since we started Phoenix New Times, it has been defined as the free, independent voice of Phoenix, and we'd like to keep it that way. With local media under siege, it's more important than ever for us to rally support behind funding our local journalism. You can help by participating in our "I Support" program, allowing us to keep offering readers access to our incisive coverage of local news, food and culture with no paywalls.
Make a one-time donation today for as little as $1.