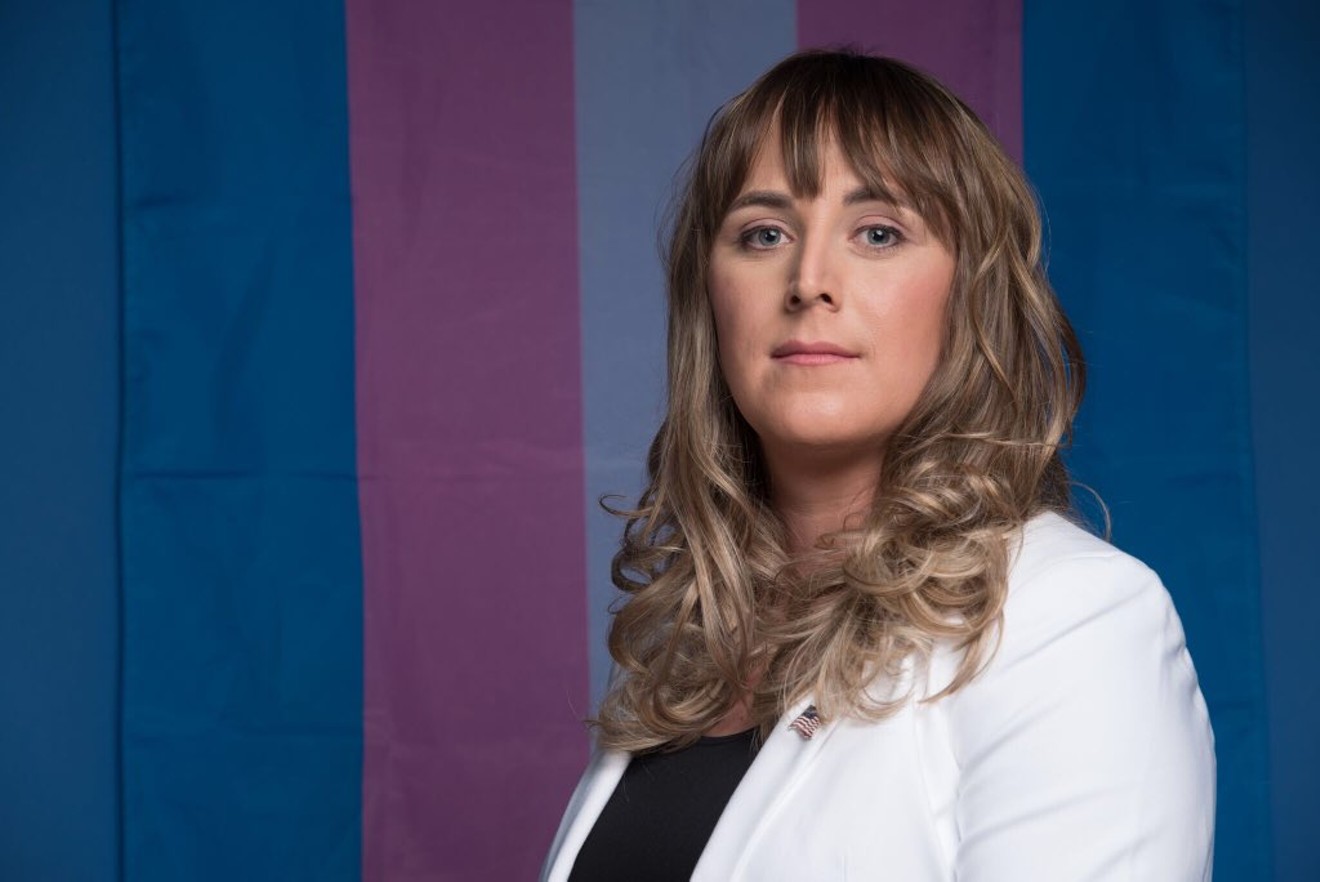 Brianna Westbrook Jim Hesterman Photography
A transgender activist who was arrested during a protest in October said Maricopa County jail guards discriminated against her by placing her in solitary confinement due to her gender identity.

The activist, Brianna Westbrook, also claims that a Maricopa County employee at the Fourth Avenue Jail called her a "transvestite" and refused to give her Estradiol, a female hormone she takes daily.

Westbrook, a former Congressional candidate, described her arrest and jail stay in a first-person narrative published on Monday by the Arizona chapter of the American Civil Liberties Union.

Maricopa County Sheriff's Office spokesperson Sergeant Calbert Gillett denied it placed Westbrook in solitary confinement due to her transgender identity and maintains that its employees do not use the term "transvestite."

During a phone interview with Phoenix New Times on Tuesday, she retold her account of her arrest and called upon Maricopa County to improve jail accommodations for transgender inmates.

On October 4, Westbrook took part in a protest outside the office of U.S. Senator Jeff Flake, urging the senator to vote against confirming Brett Kavanaugh to the Supreme Court.

Phoenix Police officers arrested Westbrook and three other women as they sat in front of the entrance of Flake's office. The protesters were taken to a holding facility and subsequently transferred to the Fourth Avenue Jail, where they were booked on charges of misdemeanor trespassing. (Prosecutors later dropped the charges.)

Westbrook claims that upon arriving at the jail, she told an MCSO officer she took Estradiol and other medication for attention deficit and hyperactivity disorder. The male officer acknowledged Westbrook and ordered her to take a pregnancy test.

Westbrook recounted telling the officer, "I can’t get pregnant, so I don’t know if you want me to continue taking this pregnancy test because it is physically impossible for me to carry a child." The officer allegedly insisted on Westbrook taking the pregnancy test anyway, and she did so.

The officer also allegedly asked Westbrook why she needed Estradiol, and she explained that she is a transgender woman. Using an outdated term for cross-dressing men, the guard allegedly said that Westbrook would be placed in a cell with "other transvestites." Advocacy organizations discourage the use of "transvestite" to describe anyone unless they specifically self-identify that way.

"I was taken aback by the slur," Westbrook said.

In response to emailed questions, Sergeant Gillett said, "MCSO does not utilize the term transvestite, but utilizes the terms Transgender, gender non-conforming, or other appropriate term for individuals that identify as such."

Gillett stressed that employees of Maricopa County Correctional Health Services (CHS), a separate county agency, also work at the jail and that the alleged comment may have come from a CHS worker.

Westbrook said she was transferred to a cell with two of the activists she was arrested with, LaDawn Stuben and Natacha Chavez, who are cisgender women. They met with a lawyer who informed them they were denied bail and would be staying the night in jail.

Then the mental health specialist asked Westbrook how she was feeling. Westbrook told the specialist she felt upset that the women would need to stay in jail overnight and expressed frustration that she needed to inform multiple MCSO employees of her gender identity.

The guard and specialist returned Westbrook to the cell with Stuben and Chavez.

Less than an hour later, Westbrook said, the specialist returned with another guard and told her that they were transferring her to an isolation cell. Westbrook remembers that the guard explicitly mentioned her transgender identity as the reason for the transfer.

In a phone interview, Chavez said she heard bits and pieces of the conversation and recalls the specialist saying they were separating Westbrook because Chavez and Stuben are female and "they’re not sure where exactly she should be." Chavez stressed that the transfer occured after the three women had been in the same cell for hours.

Westbrook spent the night in isolation before being released the next day.

Sergeant Gillett said Westbrook was placed in solitary because she was classified as a "high profile" inmate.

"This is common practice for those inmates that appear on the news, or have a high likelihood of appearing on the news, to ensure their safety while in Intake," the statement said, failing to address the fact that Westbrook was placed in a cell with co-protestors.

"There is no indication that this inmate was placed in Isolation due to being Transgender," the statement continued.

The spokesperson added that, per policy, in-custody inmates that identify as transgender or nonconforming are placed in isolation until the MCSO finishes a classification process and the inmate fills out paperwork related to the Prison Rape Elimination Act. Then the MCSO determines "proper housing." Westbrook was not in custody, so she did not go through classification, the spokesperson said.

Westbrook said she decided to speak out about her experience now because of transgender awareness week. She believes that the MCSO should conduct a review of policies related to sexual orientation and gender identity, improve its risk assessment procedure for the safety of LGBT inmates, and introduce a nondiscrimination clause specifically addressing gender identity.

"I’m not suing them," Westbrook said. "I just want them to have policies in place to address transgender and non-conforming people."

Gillett noted that Maricopa County Sheriff Paul Penzone created a LGBTQI board upon entering office in 2017. "This board not only advises the Office on issues important to the community, but took the lead in helping to create a new MCSO policy called 'Transgender and Intersex Interactions,' which the advisory board has been working on for some time with MCSO. That policy is in the final stages of approval and implementation," Gillett said.
KEEP PHOENIX NEW TIMES FREE... Since we started Phoenix New Times, it has been defined as the free, independent voice of Phoenix, and we'd like to keep it that way. With local media under siege, it's more important than ever for us to rally support behind funding our local journalism. You can help by participating in our "I Support" program, allowing us to keep offering readers access to our incisive coverage of local news, food and culture with no paywalls.
Make a one-time donation today for as little as $1.
Steven Hsieh was a staff writer for Phoenix New Times from August 2018 to April 2020.
Contact: Steven Hsieh
Follow:
Twitter: @stevenjhsieh