Like many other Trump supporters, the friends celebrated the historic moment in front of the TV.

Her front yard was decked out with U.S. flags and Trump campaign signs.

Rizzo had made candy boxes decorated with Trump's name and image for the celebration. 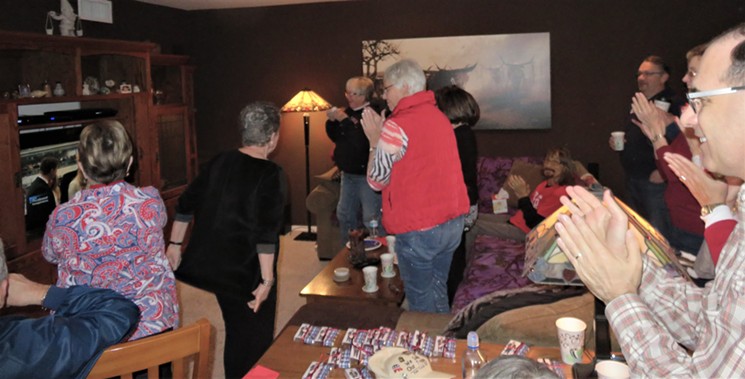 A group of Scottsdale Republicans cheer on Friday after Donald Trump was sworn in as the 45th U.S. president.
Ray Stern
She was one of about 20 Scottsdale residents, mostly senior citizens, who attended Pelletier's morning inauguration party.

Many Democrats across the country felt something close to horror when, at 10 a.m. Arizona time, U.S. Supreme Court Chief Justice John Roberts swore Trump in as the 45th president.

The Republicans at Pelletier's Scottsdale home whooped it up.

Pelletier, the club's secretary, popped the champagne and guests held up their cups to honor the new president.

They cheered and applauded as Trump gave short shrift to ex-President Obama and hammered home the idea that a new day has come. 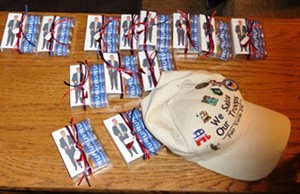 Party favors made by one of the inauguration party's guests.
Ray Stern
Warmed by the blazing fireplace near the TV, the guests kept up a snarky running commentary.

Trump said the Obamas have been "magnificent" and one white-haired lady quipped, without a trace of irony, "Oh, he has to lie a little bit."

When Trump mentioned "radical Islamic terrorism," a few of the guests let out a "whoo-hoo!"

"God is back!" another said a few minutes later.

She scoffed at the idea that some people are worried about Trump.

"People just need to chill," Pelletier said. "The world is not going to end because Trump is president. In fact, things are going to get better because of Donald Trump." 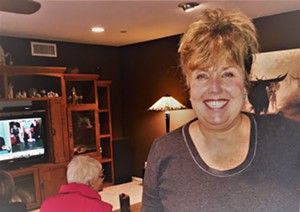 Jacobsen, for instance, believes Trump will make "every effort" to ensure people are covered.

Once the economy revs up, she claimed, millions of people will have jobs that will offer insurance.

Details of Trump’s plan to replace Obamacare with something else haven't yet been released.

Joan Lang, former president of the Palo Verde club, acknowledged that Trump has set a high bar with all his promises.

"I don't think everything can happen," she said. "If he gets half of it done in the first two or three years, that’ll be good."

"I have to admit," said her husband, Warren, "I was a little surprised he wasn’t more generous toward the Obamas. No best wishes. It was a stinging kind of an indictment of the last eight years."

Guests sighed with satisfaction as the TV screen showed Obama and his family flying away in a military helicopter.