About 25 protesters stationed themselves at the entrance to the Phoenix Art Museum on Thursday evening to protest Arizona Public Service and its CEO, Don Brandt. Elizabeth Whitman
A small crowd amassed at the entrance to Phoenix Art Museum for nearly two hours Thursday evening, protesting the deadly greed of the state's powerful largest utility just outside the venue where its CEO, Don Brandt, was slated to receive a prestigious award from the Arizona Chamber of Commerce.

Meanwhile, Facebook mysteriously blocked one of the organizers, Stacey Champion, claiming that the Facebook event for the peaceful protest violated community standards.

As temperatures hovered around 103 degrees, the group of about 25 people shouted for Arizona Public Service and Brandt to address the death of Stephanie Pullman, a 72-year-old woman who died partly from environmental heat exposure last September after APS cut her power. Brandt received the Heritage Award for his “accomplishments and commitment to Arizona” precisely one week after news of Pullman's death emerged. 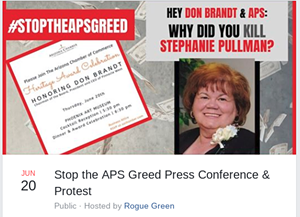 One organizer, Stacey Champion, was blocked from Facebook after posting this event. Facebook later called the blocking a "mistake."
Facebook
“Say her name!” the protesters shouted in a repeated call and response. “Stephanie Pullman! Say her name!” The chant evolved. “Shame on APS! Shame on Don Brandt.”

They also called on the Corporation Commission, the state body charged with regulating APS, to do its job, to bar the utility from pouring millions into political races, and to protect people from high rates.

In the hours leading up to the protest, Champion was blocked from Facebook for “bullying and harassment.” Screenshots she shared with Phoenix New Times show that Facebook cited her event, “Stop the APS Greed Press Conference & Protest,” as not following its community standards.

Champion said she noticed Thursday morning that her ability to post on Facebook had been cut, supposedly temporarily, and for only 12 hours. The event itself, however, was not taken down, as New Times and others could still view it.

A spokesperson for Facebook told New Times that Champion had been blocked by “mistake” and that her content did not actually violate community standards.

Someone apparently complained to Facebook over Thursday's protest.
Facebook
Asked to explain how the mistake happened, the spokesperson said that Facebook had received a report on something Champion had posted, and that someone on the review team made a mistake in deciding that it violated community standards.

The spokesperson did not say who sent that report.

Shortly after 6 p.m., the company apologized to Champion via email for the "mistake" and said it had "removed the associated blocks from your account." But a screenshot from after midnight on Friday showed that Facebook still wouldn't allow Champion to post to the site of her own company, Rogue Green.

Champion, who long has sounded the alarm about heat-related deaths and exorbitant rates charged by the state’s largest utility, loosely coordinated the demonstration with advocacy groups Chispa AZ and Sierra Club.

Addressing the press during Thursday's protest, they demanded that Brandt appear before the CorpComm to address APS’ rampant political spending, its suppression of renewable energy in one of the sunniest states in the country, and last year’s 110,000-plus shutoffs.

Stacey Champion, center, was blocked from Facebook as she organized a protest against APS.
Elizabeth Whitman
Champion noted that Pullman’s service had been cut over $51.

Champion read a statement on behalf of Pullman’s grown children, choking up toward the end, which recounted how no one — not APS, and not the Corporation Commission — seemed to care when they told both entities about their mother’s death last September.

“We demand a response from Don Brandt,” the family’s statement concluded. Brandt has yet to comment publicly on her death, despite requests from the news media, including New Times.

Arizona House Democratic Leader Charlene Fernandez, who said she had been invited by a friend to attend the award dinner, decided to join the protesters instead. Wearing a black dress and glittering silver heels, she held up a sign that read, “Shame on APS.”

Protesters against Arizona Public Service gathered Thursday night outside the Phoenix Art Museum.
Elizabeth Whitman
Lexuses and Audis, rolling directly past the protesters stationed at the entrance, bore suited men and dressy women who maybe glanced in the protesters’ direction. Several hundred feet away, as attendees of the dinner honoring Brandt strolled on foot toward the Greenbaum Lobby, a few heads turned to the small group and their cries.

“Don Brandt and other people going into the Phoenix Art Museum, you are supporting a corrupt individual,” one woman hollered through a megaphone. “This man doesn’t give a shit if our electricity is cut off!”

Brandt, of course, did not emerge, although a security guard hovered close by. In the distance, people continued trickling into the museum, through glass doors and past dutiful, diligent security, toward a back room somewhere, far away from the protesters and their cries.
KEEP PHOENIX NEW TIMES FREE... Since we started Phoenix New Times, it has been defined as the free, independent voice of Phoenix, and we'd like to keep it that way. With local media under siege, it's more important than ever for us to rally support behind funding our local journalism. You can help by participating in our "I Support" program, allowing us to keep offering readers access to our incisive coverage of local news, food and culture with no paywalls.
Make a one-time donation today for as little as $1.
Elizabeth Whitman was a staff writer for Phoenix New Times from March 2019 to April 2020.