Scottsdale's Big Flood Bet Could be Just a Wash for Homeowners The Rawhide Wash Mitigation Project in northwest Scottsdale should save homeowners money, but it might cost them even more. Maricopa County
More than 800 homeowners in Scottsdale are poised to save, on average, hundreds of dollars in flood insurance costs each year if the city council approves the next step of a $15 million flood mitigation project next week.

The project would be wrapped up by the end of 2023 if construction goes smoothly.

Homeowners nationwide are sometimes required by their mortgage lender to purchase flood insurance, especially if the home sits inside a high-risk flood zone. These Scottsdale homes sit inside flood zones with moderate risk, according to city maps which rely on federal map data.

That means these properties would likely not be required to have insurance but it's recommended, especially during Arizona's monsoon season, when flooding is an issue.

FEMA administers the National Flood Insurance Program which has been swimming in tens of billions of dollars in debt for years. The program has paid out more money to customers with flood damage than it collected in insurance premiums.

But until the new insurance premium quotes roll in, about 1,300 homeowners in Scottsdale might disagree with the federal government agency about saving money.

When the city of Scottsdale updated its flood zone maps last summer, more than 500 homeowners were removed from high-risk flood zones. As a result, homeowners were able to cancel any flood insurance policies and save hundreds of thousands of dollars, collectively. That’s what Scottsdale floodplain administrator Ashley Couch touted in August.

Couch did not respond to several requests for comment for this story.

While boasting about the opportunity to save money, the city official quietly recommended Scottsdale homeowners keep flood insurance anyway, even in low-risk zones.

“We can’t forecast what Mother Nature is going to do," Marsell, the FEMA specialist said.

On Monday, Scottsdale City Council is expected to approve the next step in this plan. Eventually, the city would carve 850 homes and businesses alike out of the floodplain. The properties affected by the change include land which stretches from Pinnacle Peak Road northbound past Happy Valley Road.

Known as Rawhide Wash, the active floodplain represents a 100-year flood risk for about 800 homes and 100 businesses, including the shopping plaza Pinnacle at Scottsdale. That means there is a one percent chance of a major flooding event every year.

It's always a gamble to drop flood insurance because monsoon water can seep into the home quickly and cause significant damage, FEMA suggested.

“Floods are the costliest natural disaster that we know of,” said Marsell, who works in the FEMA district that oversees Arizona. “It’s so widespread and so invasive.”

Homes at a lower risk of flooding tend to pay less for insurance and historically, flood maps determined the risk.

FEMA has a new way to calculate risk and homeowners in Scottsdale are estimated to see a $96 hike in new insurance premiums, according to the federal agency. New policy changes, including savings, went into effect in October 2021 and all policy prices will change in April.

To offset such a big hike, Scottsdale is participating in a federal program that enables its residents to get a discount between 5 and 20 percent.

The new FEMA calculation sets aside the traditional flood zone maps and instead uses variables such as when a home was built and weather patterns in the area. As a result, homes on the same block could have significantly different risk profiles. Insurance brokers even evaluate structures on the same property separately.

“You could have two homes next to each other paying different insurance premiums,” Marsell said.

The floodplain in Scottsdale has been shrinking for years but the risk of flooding continues to grow.
click to enlarge 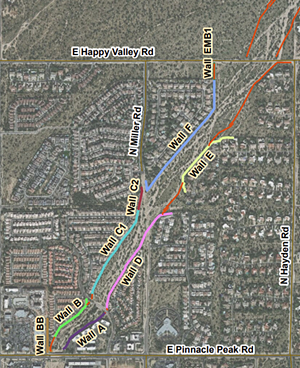 New concrete walls that will be added to the Rawhide Wash as part of a four-year-long mitigation project are shown in red on this map of northwest Scottsdale.
Maricopa County
Nearly a quarter of flood insurance claims come from low-to-moderate-risk zones, according to the Arizona Department of Insurance and Financial Institutions.

More than 3,000 homes in the city have at least a 26 percent chance of major flooding in the next 30 years but remain uninsured, city records and nonprofit Flood Factor estimates show.

In 1968, Congress created the NFIP because many private homeowners insurance companies refused to pay for flood damage.

One inch of water can cause $25,000 in damage, FEMA estimates. And that's not unheard of in the Sonoran Desert during monsoon season where flash flooding is common.

The average homeowner in Scottsdale has paid $483 per year for flood insurance coverage but that will change this year under new rules.

Most of the 8,000 flood insurance policyholders in Scottsdale bought federal flood program policies worth a total of $4 million a year.

Phoenix homeowners cough up $765 each year for flood insurance on average, FEMA estimates. But 90 percent of policyholders are expected to see a spike in April when new rates kick in.

Eventually, FEMA expects to collect enough money from premiums to repay its colossal debt.
FEMA owes the U.S. Treasury more than $25 billion, according to a report from Congress. That does not include another $16 billion in debt that Congress forgave in October 2017. FEMA can still borrow another $10 billion before it hits the debt ceiling allowed by law.

Some policyholders won't be able to afford the new flood insurance rates, even FEMA admits.

That's why Scottsdale's administrator celebrated when more homes were removed from the floodplain.

“The politicians are right – the risk is lower,” Marsell said. “But is it really worth it?”

Even after a presidential declaration of a major disaster, FEMA programs can only provide up to $36,000 per household to any uninsured residents, he said. For homes damaged by flooding, it could be the difference between a few weeks in a hotel and bankruptcy for a family.

In 2019, the city told a Scottsdale newspaper that residents were against a similar project that carried a $27 million price tag because taxpayers would bear the entire cost of the project.

Scottsdale agreed to pay $1.5 million, Maricopa County Flood Control District would pay $7.5 million; and the city of Phoenix is on the hook for $6 million.

Phoenix hopes to reduce its exposure to the Rawhide Wash floodplain by more than 1,500 acres when the deal is done.

Scottsdale must kick in $15,000 each year for upkeep and has $2 million in the Capital Improvement Program bank account.

“We recently got feedback from FEMA,” Nabaty said of the project, which will erect about a dozen six-foot concrete walls on either side of the riverbed. “We got some comments and have addressed them all.”

Scottsdale City Council will consider a resolution to acquire the rights-of-way needed to move forward with the project on Monday evening.
KEEP PHOENIX NEW TIMES FREE... Since we started Phoenix New Times, it has been defined as the free, independent voice of Phoenix, and we'd like to keep it that way. With local media under siege, it's more important than ever for us to rally support behind funding our local journalism. You can help by participating in our "I Support" program, allowing us to keep offering readers access to our incisive coverage of local news, food and culture with no paywalls.
Make a one-time donation today for as little as $1.
Elias Weiss is a staff writer at the Phoenix New Times. A native of Charlotte, North Carolina, he reported first for the Northwest Arkansas Democrat-Gazette and was editor of the Chatham Star-Tribune in Southern Virginia, where he covered politics and law. In 2020, the Virginia Press Association awarded him first place in the categories of Government Writing and Breaking News Writing for non-daily newspapers statewide.
Contact: Elias Weiss
Follow:
Twitter: @ecweiss