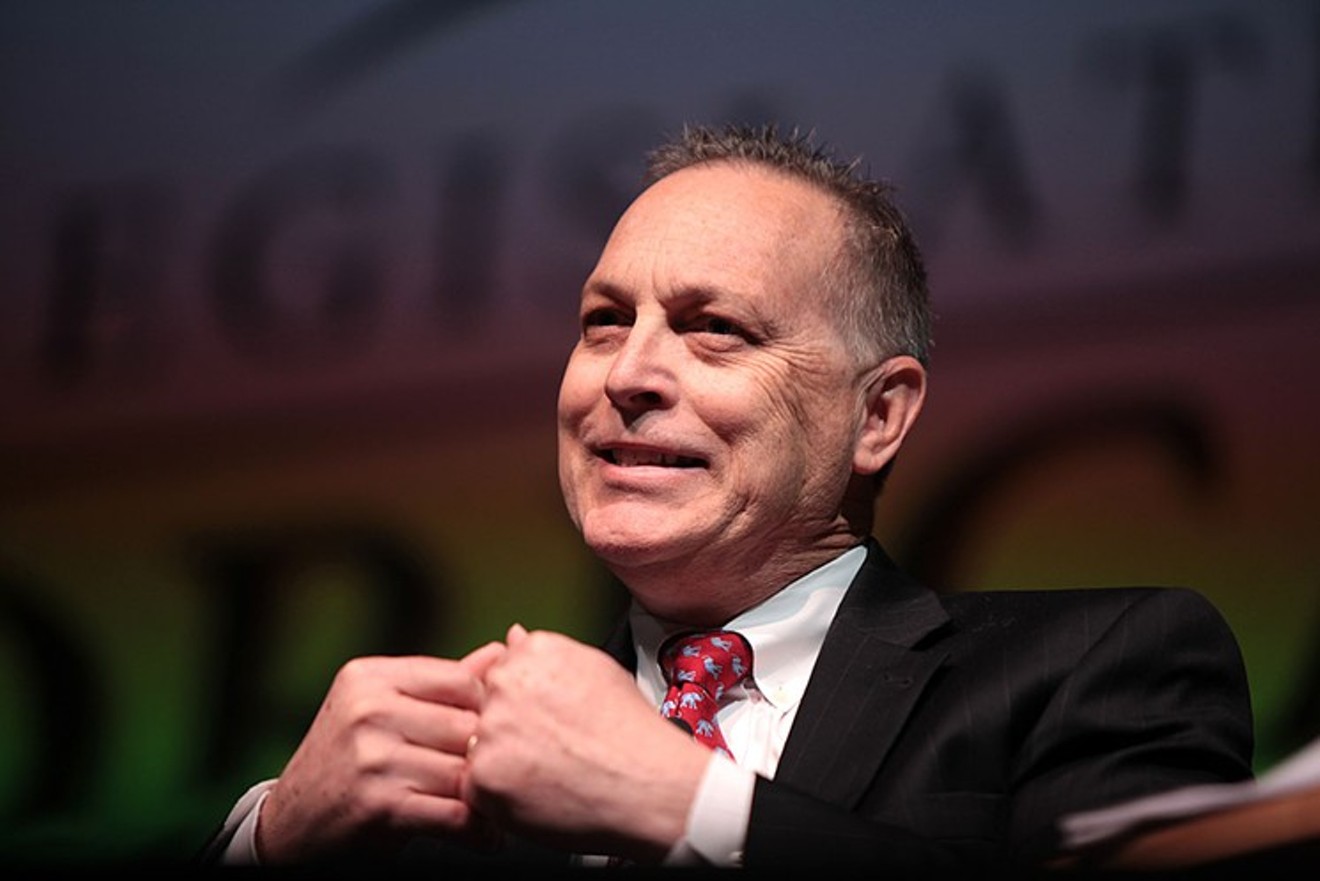 Arizona Congressman Andy Biggs Gage Skidmore
An Arizona lawmaker is calling for prosecutions in the wake of CNN's release this week of 2,319 text messages between former President Donald Trump's chief of staff Mark Meadows and his key allies, as they plotted to undo the results of the 2020 presidential election.

The communications offer a glimpse into the desperation inside Trump's inner circle and the lengths his allies, including some in Arizona, were willing to go to nullify the certified election results.

The latest revelations left Democratic Arizona Congressman Ruben Gallego fuming. He said that he hoped that those with a role in orchestrating the insurrection would be prosecuted and that the congressional committee investigating the effort will hold accountable those responsible for the plot.

"Just because you weren't actively punching police, tasing police like some of these insurrectionists were, doesn't mean you weren't culpable for the damage," Gallego told Phoenix New Times. "Don't just go after the people that were the foot soldiers."

So far, 820 people have been charged for their role in the U.S. Capitol riots. At least 11 have ties to Arizona, including Jacob Chansley, the "QAnon Shaman," who posed on the Senate dais with a spear and a bullhorn, and was sentenced to 41 months in prison after pleading guilty to one count of obstructing an official proceeding.


The new texts were turned over by Meadows to the House committee investigating the events of January 6, 2021, when rioters breached the U.S. Capitol as lawmakers were voting to certify the 2020 presidential election and declare Joe Biden the next president.

Other names included Arizona Congressman Andy Biggs, who represents much of the East Valley, and Arizona Republican Party chair Kelli Ward. Both have played high-profile roles in disseminating election fraud conspiracies over the last two years — Biggs from Washington and Ward from Lake Havasu City.

The texts also show that in December 2020, Bernard Kerik, the former New York City police commissioner and an associate of Trump attorney Rudy Giuliani, had been traveling with a "team" in Michigan and Arizona. Kerik, alongside Giuliani, has been asked to appear before the January 6 committee for his role in spreading election fraud claims.

According to the texts that CNN published, Biggs contacted Meadows in November 2020 with an idea that would later catch on: appointed electors in states that were the key focus of election fraud conspiracies.

This idea for "alternate electors" would eventually become a reality. In the coming weeks, seven states, including Arizona, submitted lists of alternate electors in an attempt to keep Trump in office despite his loss.

Biggs' texts contain several spelling and grammar errors, and used the phrase "a look doors," not "electors" in his message, though it does appear to be a reference to the concept of alternate electors.

"I'm sure you have heard of this proposal," he wrote to Meadows on November 6, three days after the 2020 election. "It is to encourage the state legislatures to appoint a look doors in the various states where there's been shenanigans."

He continued: "If I understand right most of those states have Republican Legislature's. It seems to be comport with glorified Bush as well as the Constitution. And, well highly controversial, it can't be much more controversial than the lunacy that were sitting out there now. And It would be pretty difficult because he would take governors and legislators with collective will and backbone to do that. Is anybody on the team researching and considering lobbying for that?"

Meadows sent back a single text: "I love it."

Biggs did not respond to questions from Phoenix New Times about his texts.

Meadows also received "dozens" of text messages from Ward, Arizona's GOP chair, from the time of the 2020 election through January 2021, CNN reported. To date, CNN has only published one text from Ward's many inquiries.

It reads: "This guy says he's cracked the whole election fraud and wants to speak to someone I sent his info to Molly Michael a few days ago, but I'm not sure it went anywhere," she wrote to Meadows on December 9, 2020. It's not clear what "guy" she is referring to here, and Ward also did not return New Times' inquiries.

Meadows did not respond to Ward.

Gallego, the Democratic U.S. Congressman representing parts of Phoenix and Glendale, told New Times that he was hardly surprised by the contents of the texts.

The reams of texts deepen our understanding of the extent to which Trump's political operatives schemed to call the election results into doubt in advance of the January 6 insurrection.

"Mark, just checking in as time continues to count down. 11 days to 1/6 and 25 days to inauguration. We gotta get going!" wrote U.S. Representative Scott Perry of Pennsylvania, to Meadows as January 6 approached.

Eleven days later, on January 17, 2021, U.S. Representative Marjorie Taylor Greene, a Georgia Republican, wrote to Meadows, calling for Trump to institute martial law (misspelling it "Marshall law"). "They stole this election. We all know. They will destroy our country next. Please tell [Trump] to declassify as much as possible so we can go after Biden and anyone else," she wrote.

Greene says she does not recall this text, and her lawyers have argued that the messages are unverified and should not be admitted into court in a Georgia lawsuit against Greene over her role in the January 6 riots.
KEEP PHOENIX NEW TIMES FREE... Since we started Phoenix New Times, it has been defined as the free, independent voice of Phoenix, and we'd like to keep it that way. With local media under siege, it's more important than ever for us to rally support behind funding our local journalism. You can help by participating in our "I Support" program, allowing us to keep offering readers access to our incisive coverage of local news, food and culture with no paywalls.
Make a one-time donation today for as little as $1.