ASU Students Struggle Under Weight of Soaring Rents in Tempe

District on Apache, an apartment complex in Tempe that houses mostly students, is part of a marketing partnership with ASU. Matt Hennie

As Arizona State University students return for the start of fall classes on Thursday, they arrive in Tempe to what seems like a new inevitability: intractable surges in rent.

While Tempe remains cheaper than other suburban enclaves such as Gilbert and Chandler, the city is becoming less affordable for many residents, especially students. Monthly rent for one-bedroom apartments start at $1,527 — well over the average in nearby Phoenix — and the upswing is likely to continue.

"We do have a certain time of the year when we will raise the rent," said Parker Stewart, manager at District on Apache, a six-story apartment complex with a modernist facade. "We are just off campus; 99 percent of our tenants are ASU students."

Demand and growth are key factors in rent reappraisal, Stewart said. He noted that all 279 units available for the 2022-2023 school year were leased by March. Rent for a one-bedroom, one-bathroom unit had increased by $45 over the previous year, up to $1,695 per month.


District on Apache is just part of a larger trend.


Ganesh Betha, a 2020 graduate of ASU’s master's program in computer science, saw his Tempe rent go up nearly $400 over three years — with one price hike kicking in during the early days of the coronavirus pandemic.


During the first half of 2019, Betha paid $620 per month for a room in a two-bedroom, two-bathroom apartment at 12Fifty5 on University, currently known as Paseo, according to documents he shared with Phoenix New Times. He stayed in the complex until June 2020, when renewing his lease would raise total monthly payments to more than $800.

Affordable rent has become a casualty of Tempe’s booming housing market. According to Redfin, an online real estate brokerage, median property values in the city have climbed nearly 40 percent over the past two years — from slightly more than $300,000 in spring 2020 to half-a-million dollars in June 2022.

ASU also plays a large role in rental pricing. With just one in five of the 55,000 ASU students who attend classes on the Tempe campus living in dorms, the university is pushing tens of thousands of people into the local housing market and increasing the pressure on its limited housing supply.

The school also has compounded that pressure by increasing international student admission to make up for budget shortfalls.


A 2018 report from ASU’s Office of the Economist charts this trend, which began in the wake of the 2008 financial crisis when endowments were plummeting alongside enrollment. “In fall 2009, international students accounted for 5.2 percent of total student enrollment at ASU’s metro campuses,” according to the report. “By fall 2017, the international student share had increased to 14.3 percent.”


Because of the steep costs required to study abroad in the U.S., most of the new international students at that time came from wealthy households, resulting in a substantial cash infusion into the university and surrounding Tempe economy.


“Among undergraduates, international students paid 76 percent more in net tuition and fees than did the average student,” according to the report. “International undergraduates enrolled at ASU spent a total of $2,217 per month on housing, utilities, telecommunications, food, entertainment, retail, and personal services."

That is 46 percent more than what the average ASU undergraduate spent at the time of the study, according to the report.


By 2015, ASU had the fourth highest international student enrollment in the country. Two years later, an analysis by Real Page found that ASU had the tenth highest overall enrollment growth and the “highest change of enrollment” among American universities. It noted, “The amount of enrollment growth affects student housing demand, which translates into the amount of new supply needed and the ability of new and existing supply to be absorbed in the market.” 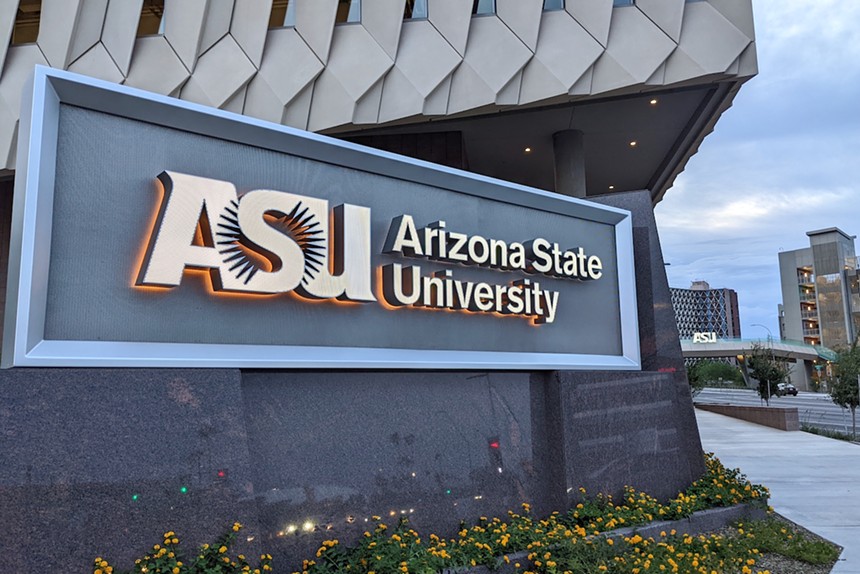 More than 80 percent of ASU students live in off-campus housing, adding to a tight and increasingly expensive housing market in Tempe.
Matt Hennie


Closer to Campus at a Cost

Betha, who arrived in the U.S. as international student from India, said the university hasn't built enough student housing to accommodate the influx of new students.

ASU declined to answer questions from New Times. “Thank you for reaching out, but it doesn’t look like we will be able to help you with your request," ASU Media Relations Officer Gabriella Kemp said.

The university has a marketing partnership with Vertex, District on Apache, and Atmosphere Tempe — luxury apartment communities with amenities and walkability to match. Starting rents range from $1,500 to $1,700 for one-bedroom units.

Arjun Cheviviballi, an international graduate student in construction engineering at ASU, found limited options when he arrived in January. Cheviviballi, 23, has been subletting a one-bedroom, one-bathroom apartment two miles from campus for $1,100 a month. He has been trying unsuccessfully to find a new place. "I am trying to get closer to campus so I can just walk," he said.

Cheviviballi added that he's worried about an impending rent hike. He sublets from a friend, and once the lease expires, the price of the room will jump to between $1,500 and $1,600. "My preference is a one-bedroom, one-bathroom place for a similar price, but that's not possible right now," Cheviviballi said. He is currently considering getting a roommate to lease a two-bedroom, two-bathroom apartment closer to campus.

To help address the tight rental market, the city of Tempe has sought to expand the housing supply through a textbook urban renewal plan. Initiatives include offsetting preliminary costs such as environmental assessments, offering tax credits and other benefits to developers who reserve units for workforce housing, and upzoning existing properties to increase density. It is also purchasing land to create workforce housing and has chartered a nonprofit, the Tempe Coalition for Affordable Housing, that manages more than 100 units.

But the impact of those efforts remains to be seen.