The Central Arizona Project canal in the Harquahala Valley. Elizabeth Whitman
Rusty Bowers, the Speaker of the Arizona House of Representatives, quietly revived a controversial bill this week that would allow private water companies to tap into groundwater in a rural county and transport it to cities and developments in central Arizona.

The bill, HB 2609, applies to the Harquahala Valley, a region about 60 miles west of Phoenix. In the world of Arizona water, it is known mostly because it is one of a handful of rural areas from which the state or a political subdivision, like a city, can legally take water and bring it into an urban area.

Critics fear that opening up that option to private entities, as HB 2609 seeks to do, would plunder reserves of precious groundwater in a rural part of the state for the benefit of powerful special interests, like developers. They also worry it could be a boon to out-of-state water speculators, who have invested in property and infrastructure in the Harquahala Valley and vocally support the bill.

“They’re going to take our natural resource and sell it to cities and counties, to whoever they can, basically at our expense,” said Holly Irwin, a supervisor in La Paz County who opposes the bill. “I have constituents having issues with their wells failing, and having to pump deeper. It costs them $25,000 to $30,000 to redo their wells.”

Proponents of the bill level that in times of drought, sacrifices are necessary. Besides, they say, the law was written nearly 30 years ago that groundwater in the Harquahala Valley could be given over to other areas of the state, like neighboring Maricopa County.

No one has imported water from the Harquahala Valley into central Arizona yet, but with impending shortages on the Colorado River and an ongoing two-decade drought, advocates of HB 2609 say it is time to take advantage of the 1991 law allowing these water transfers.

The bill has divided the House, with a sliver of Republicans joining the Democrats in opposition to the proposed legislation. Representative Regina Cobb, whose district covers La Paz, is one of the Republicans against the bill. As it stands now, the bill does not have the 31 votes it would need to pass the House. 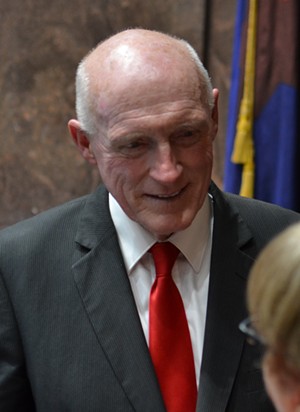 Arizona House Speaker Rusty Bowers during the opening session of the Legislature on January 14, 2019.
Elizabeth Whitman
Trying to win over the bill’s opponents, Bowers convened a last-minute stakeholder meeting on Wednesday afternoon in a conference room in the basement of the House. Participants could also dial in by phone. The email invitation was sent at 5:40 p.m. the night before, and the invite list included lobbyists and representatives from the agricultural, homebuilding, and development industries, several of whom donated to Bowers' campaign last year. A few people from state agencies and La Paz County were invited, too. Democrats and environmental activists were left off the list, although a few showed up anyway.

In a series of testy exchanges, Bowers and other advocates of the bill tried to convince – some might prefer the word "bully" – representatives of La Paz County. At times, the advocates spoke as if only central Arizona were entitled to the water in the Harquahala basin.

“I’m hoping you’re hearing that, at the very minimum, there is a consensus that Harquahala is what it is … that its birthright is that basin [of water] that is someday … going to move,” Stan Barnes, a lobbyist for the Harquahala Valley Water Project, a small group of water speculators, told La Paz County Supervisor Irwin during the meeting. “And it’s futile to oppose that, with current law the way it is.”

He went on, “We may wish it is other than what it is, but La Paz County was set aside for this purpose in 1991. I shouldn’t say that. I take that back. Harquahala Basin was set aside.”

Barnes concluded, “If I had a magic wand, I’d help my friend Supervisor Irwin see that there is wisdom in letting that develop.”

Irwin pushed back. “What about the economic development for La Paz County? That’s what I’m looking out for. What I’m hearing is a private company wanting to come in and take our water and make a buck off of it.”

In the end, Bowers, who is not the bill’s sponsor — that would be Representative Warren Petersen from Gilbert — made a few concessions. He agreed to remove a line from the bill that would've extended the legal drilling depth in the Harquahala Valley from 1,000 feet to 1,500 feet. He offered to get the hydrographic data that would ensure that enough water would remain in La Paz County for its needs while also supplying central Arizona.

After the meeting, however, the bill still did not appear to have the votes it needed to pass. It was not scheduled for a vote, as of press time on Friday.

The bill’s proponents say that its definition of “private water companies” would be limited to utilities that are regulated by the Arizona Corporation Commission and defined under the Arizona Constitution as public service corporations. Through these utilities, developers and homebuilders can secure the supply of water they need to win approval from the state to begin construction.

Spencer Kamps, lobbyist for the Homebuilders Association of Central Arizona, said that developers in central Arizona needed more water and sometimes struggled to demonstrate to the state that they met its requirement of a 100-year assured supply. 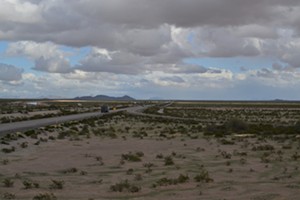 Beneath the dry surface of the Harquahala Valley lies a copious amount of groundwater.
Elizabeth Whitman
“It’s important,” Kamps said of HB 2609. “Any legislation that allows buyers and sellers to increase the water supply in central Arizona is an important thing.” Any time additional water supplies come along, “we think that is a positive thing for the state of Arizona,” he added.

Others aren’t so sure that the bill would apply only to regulated utilities. The bill would add “municipal providers” to the list of entities that can take water out of the Harquahala Valley.

Arizona law defines a municipal provider as “a city, town, private water company or irrigation district that supplies water for non-irrigation use.”

Warren Tenney, director of the Arizona Municipal Water Users Association, said that he wanted to see a “clearly airtight” definition, “that we’re talking about public service corporations under the Constitution regulated by the Arizona Corporation Commission.”

Sandy Bahr, director of the Grand Canyon chapter of the Sierra Club, worried that despite its proponents' claims, the bill would also benefit speculators. In the final minutes of Wednesday's meeting, she called out water speculators as "the man behind the curtain" of HB 2609.

Indeed, one of its staunchest supporters is Barnes, the representative for the Harquahala Valley Water Project. That project is being co-developed by New York City hedge fund Water Asset Management and North Dakota hotel magnate Gary Tharaldson, who have lobbied, unsuccessfully so far, to sell their water to users in central Arizona.

In October, when Arizona was in the midst of crafting a plan to deal with shortages on the Colorado River, Tharaldson and Vince Vasquez, Water Asset Management’s local representative, penned an offer to the leaders of those negotiations.

Their project "includes 26,500 acres of privately-owned land capable of delivering a long-term average of approximately 80,000 acre-feet per year to Central Arizona Water users," they wrote to Tom Buschatzke, director of the Arizona Department of Water Resources, and Ted Cooke, general manager of the Central Arizona Project. Phoenix New Times obtained the letter through an open records request.

“We believe we will be in a position to deliver HVWP water to the CAP Canal in as little as two years,” Vasquez and Tharaldson wrote. The letter said they had reached a conceptual agreement with the Arizona Department of Water Resources in 2014 to extract water from the Harquahala Valley “in cooperation with the State of Arizona or a political subdivision of the State as a co-applicant,” under the very law that HB 2609 seeks to add private companies to. They said they expected the decision to be finalized in 2019.

That water was never made part of Arizona drought plan, but Water Asset Management managed to secure Bowers' attention, Bowers indicated during Wednesday's meeting. Vasquez had called him during drought plan negotiations, and Bowers told him to offer a proposal.

"And that's how this particular company came to my attention," Bowers said.

Through a spokesperson, Bowers declined to comment to Phoenix New Times regarding Wednesday’s meeting.
KEEP PHOENIX NEW TIMES FREE... Since we started Phoenix New Times, it has been defined as the free, independent voice of Phoenix, and we'd like to keep it that way. With local media under siege, it's more important than ever for us to rally support behind funding our local journalism. You can help by participating in our "I Support" program, allowing us to keep offering readers access to our incisive coverage of local news, food and culture with no paywalls.
Make a one-time donation today for as little as $1.
Elizabeth Whitman was a staff writer for Phoenix New Times from March 2019 to April 2020.