On Friday, the city of Tempe released its most extensive update so far about the incident. The officers have returned to work after an outside review, and the department is overhauling its water-related response protocols, the city announced.


New water rescue devices will be issued to officers, rescue rings will be installed along the shores of Tempe Town Lake, and officers will be trained on handling situations like the drowning death in May.

In announcing the changes on Friday, the city called Bickings’ death a “true tragedy.” City Manager Andrew Ching said in a prepared statement, “Tempe is a caring, compassionate community, and we take seriously the responsibility to examine our approaches and transform after devastating events.”

The events that led to Bicking’s death began early in the morning on May 28. Bickings, a 34-year-old homeless man, and his wife, Susan Smith, were near the Tempe Center for the Arts at the edge of Tempe Town Lake. A security guard called the police and said that he had observed the pair fighting. When officers arrived, Bickings and Smith initially cooperated. Smith said the couple had argued but that Bickings hadn’t done anything wrong.

The city released body camera footage from officers who responded and a transcript of the interaction. In it, Bickings is seen climbing over the guardrail and heading down to the lake. The interaction with the officers continues, and they perform a background check. “I’m sorry guys,” Bickings told them. “I’m going to go for a swim.”

“What’s your plan right now?” one of the officers asked him as he began to swim. Bickings started struggling and asked for help. “I’m going to drown,” he said.

Smith pleaded with the officers to help save him, according to the transcript. One officer told her that he called for a boat. When Smith tried to climb over the guardrails and reach Bickings, they restrained her. “I'm just distraught because he's drowning right in front of you and you won't help him,” she said.

It’s unclear from the transcripts and the later administrative review when the boat arrived to rescue Bickings. His body was not recovered for several hours.

When the body camera footage from the incident was released, it sparked national outcry. "Man Drowns as Arizona Police Watch," read the headline in the The Washington Post.

Bickings was considered a leader among his friends and others who were homeless. Two days before his death, he met with Tempe city officials to discuss the housing crisis and the needs of people living on the street. 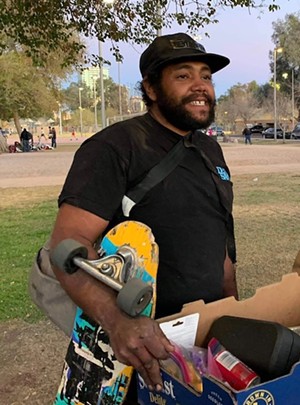 Sean Bickings
City of Tempe
Tempe tapped the Scottsdale Police Department to review the incident. The administrative review, which Tempe released on Friday, concluded that the officers should not have entered the lake to save the man.

The Tempe Police Department is conducting its own separate investigation into Bickings' death. That review is expected to be completed by late September, according to the city. The agency's findings will be turned over to the Arizona Department of Public Safety for review.


The Scottsdale review was largely based on interviews with law enforcement officers who specialize in water rescues, including the Maricopa County Sheriff's Office and Arizona Game and Fish Department. Representatives from both agencies said they would not have directed officers to enter the lake.
“MCSO would have left one observer on the shore to show the last seen point and passed that on to boat crews and divers,” Christopher Clark, the dive team supervisor for the sheriff's office, told the Scottsdale investigators. He said the sheriff's office would not direct deputies to get into the water themselves. “I find that the officers, in this case, should not have entered the water to perform a rescue," wrote Sergeant Peter Michael of the Scottsdale Police Department's internal affairs bureau. He listed several factors to support the conclusion, including that “a drowning person may drag down would-be rescuers that are not properly equipped” and “water clarity would not have been ideal.”
The three officers involved — Bryan Berman, Kelly Bennett, and Jeffrey Gebbie — have all returned to duty given the results of the review, the city said Friday. They were on paid administrative leave for a time while the city investigated the incident.


Also Friday, Tempe announced several changes to improve its response to water safety emergencies. The city will install water rescue rings with 100-foot-long ropes around Tempe Town Lake and Kiwanis Lake sometime this fall, and officers will receive water rescue throw bags. Additionally, the police department is developing a new rescue policy that is expected to be completed this summer.

Before Bickings’ death, Tempe police did not appear to have a specific policy around water rescues for officers, despite multiple lakes within city limits. In June, Phoenix New Times submitted a records request for policy documents related to drownings, which has not been fulfilled.

The Scottsdale review indicated that Tempe had no specific policy around drowning incidents. The Phoenix Police Department told New Times that it “does not currently offer swim training or water rescue training to officers.”
KEEP PHOENIX NEW TIMES FREE... Since we started Phoenix New Times, it has been defined as the free, independent voice of Phoenix, and we'd like to keep it that way. With local media under siege, it's more important than ever for us to rally support behind funding our local journalism. You can help by participating in our "I Support" program, allowing us to keep offering readers access to our incisive coverage of local news, food and culture with no paywalls.
Make a one-time donation today for as little as $1.