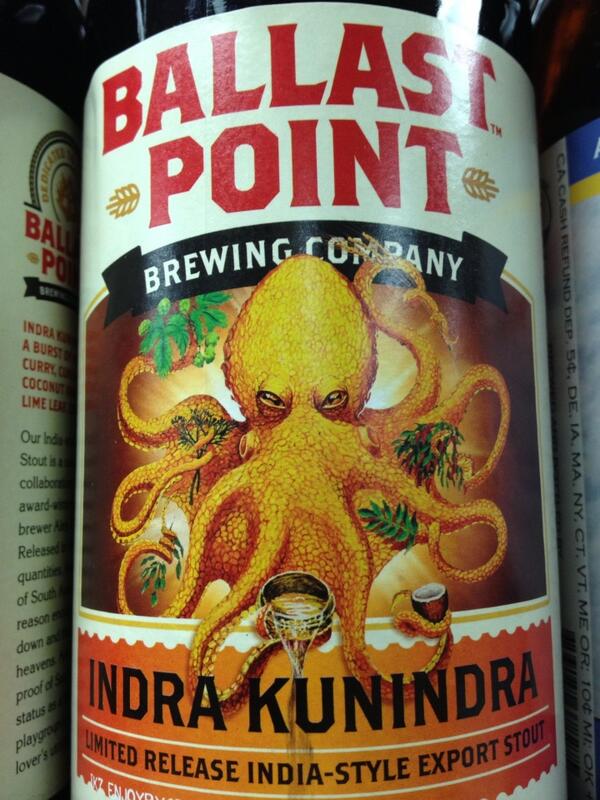 As we learned last week, some beers taste odd due to storage issues, dirty equipment, or poor brewing technique. Some beers, however, taste weird by design.

Indra Kunindra was first brewed in 2011 to celebrate the 46th anniversary of Holiday Wine Cellar, a destination beer, wine, and liquor store in San Diego. To make it, Ballast Point collaborated with an award-winning home brewer named Alex Tweet, from whose devious mind the original curry-stout recipe arose (he also thought up the outrageous "Victory at Cereal" cask utilizing Cap'n Crunch that debuted during last year's Victory at Sea Day). Incidentally, Tweet now works for Ballast Point -- when he visited the brewery to craft the first edition of Indra Kunindra, the guys there liked him, he liked them, and the rest is history.

Bottle art aside (the old label featured the elegant Holiday Wine Cellar logo; the new one is home to a menacing, spice-wielding octopus), Indra Kunindra looks fairly normal inside a glass: ebony in hue with lighter brown highlights, topped with a craggy, rocky-road head that's an inch tall. But that's where the ordinary characteristics end.

Even from a foot away, you can tell the brewers weren't messing around with the spices. Bagfuls of curry spice and lime zest permeate the very air surrounding the beer, while toasted coconut and milk chocolate can be found deeper in the mist.

Each glass is packed with what seems like the juice of two or three limes and about as much curry as is housed in your average Indian restaurant. Cayenne pepper adds the perfect amount of spicy heat to the light-bodied brew, interacting with the warming sensation of the alcohol and the citrus-y bite of hops. Spoonfuls of coconut curry slide over the tongue on each sip, and hints of toasty bitterness can be picked up in the back -- the only flavor in the whole experience that reminds you this is a stout, or even a beer.

Beer is a wild beverage. In the hands of a skilled (demented?) brewer, flavors from every continent and culture can be re-created. Indra Kunindra absolutely kicks your ass with curry -- which isn't to say the beer's not enjoyable. It just needs to be approached like Indian food: You'd better be in the mood.