Try These 12 Must-Eat Foods In Flagstaff

Get messy at Diablo Burger in Flagstaff. Allison Young
You already know Flagstaff as a great place to take a hike and grab a craft brew. A Tower Station IPA at Mother Road Brewing Co.'s downtown brewery? Yes, please. But over the past few years, the mountain town has been steadily growing a strong food scene, adding chic cafes and chef-owned eateries alongside impressive international eats and burger joints.

There are plenty of egg-and-bacon breakfast spots to fuel your day, plus to-die-for donuts, top-notch pizza, and tasting menus that will take you places. So pack your hiking shoes and your appetite and get ready to taste some of the best dishes Flagstaff has to offer.
click to enlarge Evans Fish and Chips is a new addition to Flagstaff.
Allison Young
Fish and Chips at Evans
113 South San Francisco Street, Flagstaff
928-774-5471
Hands down the best place to catch the classic British dish in Flagstaff, Evans Fish and Chips opened in October 2021 and has quickly made a name for itself. One look at the perfectly battered and huge piece of cod and you'll see why. A generous, made-to-order portion with a shatteringly golden finish comes on a generous bed of thick, hand-cut fries. But first impressions aside, it’s the taste that’ll really get you. The crunch of the airy coating gives way to the steaming white fish inside. The itty bitty counter-service spot with the bright red exterior is so good, we wouldn’t be surprised if another Evans chippy, say in Phoenix, pops up soon. 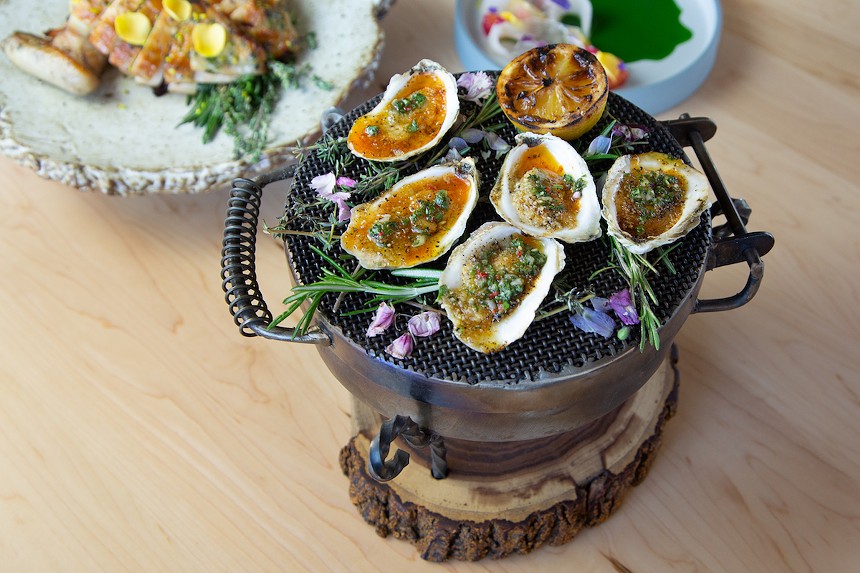 Forêt Flg will take your taste buds to France.
Allison Young
Brunch at Forêt Flg
2 South Beaver Street, Flagstaff
928-214-7280
Forêt Flg makes only 12 canéles a day. A rare find in Phoenix, let alone Flagstaff, the pastries are baked in traditional copper molds, creating a ridged and burnished shell that protects an impossibly rich and smooth custard-like center. The caramelized confections sell out fast, but you can’t go wrong with an Omelette au Fromage cooked the classic French way, the melty Croque Madame with serrano ham, Gruyère, and a fried egg, the billowy brioche toast topped with avocado and fennel slaw, or the monster Buffalo chicken sandwich that gets a taste of France with its house-made Boursin ranch sauce. Plus, the patio practically feels like Paris with the Motel DuBeau sign across the street. A view from the top at Diablo Burger.
Allison Young
Db House Burger at Diablo Burger
120 North Leroux Street, Flagstaff
928-774-3274
Everything at Diablo Burger is a level up from the norm. The substantial 6-ounce patties, made from 100 percent grass-fed beef raised on northern Arizona ranches, are grilled to order. Toppings come courtesy of local farmers and cheese-makers. And innovative combos such as the Db House which comes with blackening spice, chimichurri, and an over-easy fried egg, are served on English muffins branded with “db.” No boring buns here. Burgers are big enough to share and come with a side of Belgian-style fries made from whole potatoes, double-fried in peanut oil and seasoned with Herbs de Provence. Wash it down with a local beer on the shaded patio. 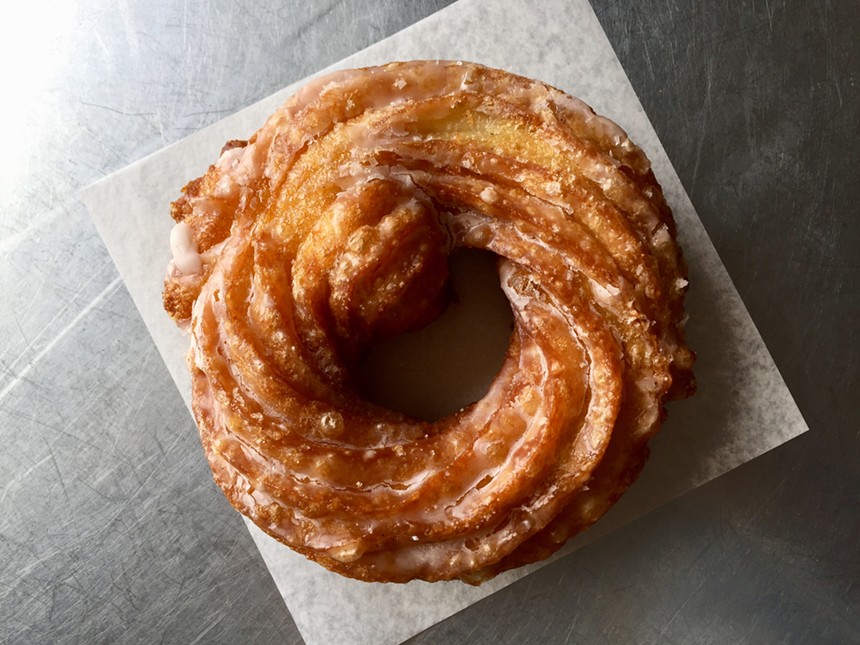 The French Cruller at Tourist Home All Day Café.
Allison Young
French Cruller at Tourist Home All Day Café
52 South San Francisco Street, Flagstaff
928-779-2811
The best time of day to head to Tourist Home All Day Cafe is at 6 a.m., when glorious trays of freshly fried French crullers hit the pastry display. More than mere donuts, these glazed darlings are creviced and irresistibly crispy on the outside and pillowy perfect on the inside. Their spiraling ridges glisten in a glazy haze, and the insides are impossibly light and pocketed with airy holes. No wonder they sell out daily and especially on weekends. This popular breakfast and lunch joint also serves up superior salads, sandwiches, and eggy delights, not to mention a cinnamon-dusted churro cruller. But it’s their OG French cruller that rises above. Wood-fired pizza perfection at Pizzicletta.
Discover Flagstaff
Pizza at Pizzicletta
203 West Phoenix Avenue, Flagstaff
928-774-3242
Picking the best pizza at Pizzicletta is like choosing your favorite child. There’s the take-charge Carne Dolce, a confident mix of house-made mozzarella, mascarpone, and spicy sausage with a sweet kiss of local honey and sage. There’s the diplomatic Margherita, with its blend of Bianco DiNapoli tomato sauce, house mozzarella, basil, and olive oil. And there’s the attention-seeking SS-145, a glorious mix of gorgonzola, almonds, kale, and lemon juice as unique as its name. All the pies are perfectly executed with naturally leavened dough beautifully charred in a wood-fired oven that was hand-built in Naples. The buzzy vibe of the cramped yet cozy interior and patio only add to the experience. 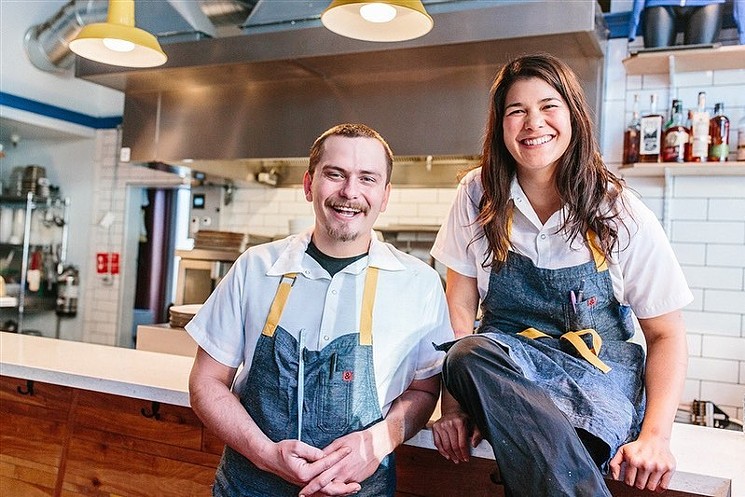 Shift Owner Dara Wong and Chef De Cuisine George Murkowicz.
Shift Kitchen + Bar
Tasting Menu at Shift Kitchen + Bar
107 North San Francisco Street
928-440-5135
The seasonal menu at Shift changes regularly, but there are a few things you can count on. The best seat in the house is at the chef’s counter, a seven-seat stretch that gives you a front-row view of pastry chef and owner Dara Wong and her crew in action. You can’t go wrong with shared small plates, say a mix of crispy Brussels sprouts with blue cheese and honey, crab cakes with curry caper remoulade, or the absolutely must-order pickled French fries, but the same can be said for the Chef’s Tasting Menu. This $70 per person revelatory experience takes you on a four-course journey. And no skipping dessert, whether it’s Aperol cake with pickled strawberries and parmesan crumb or coconut rice pudding, you’re in for more than a treat. 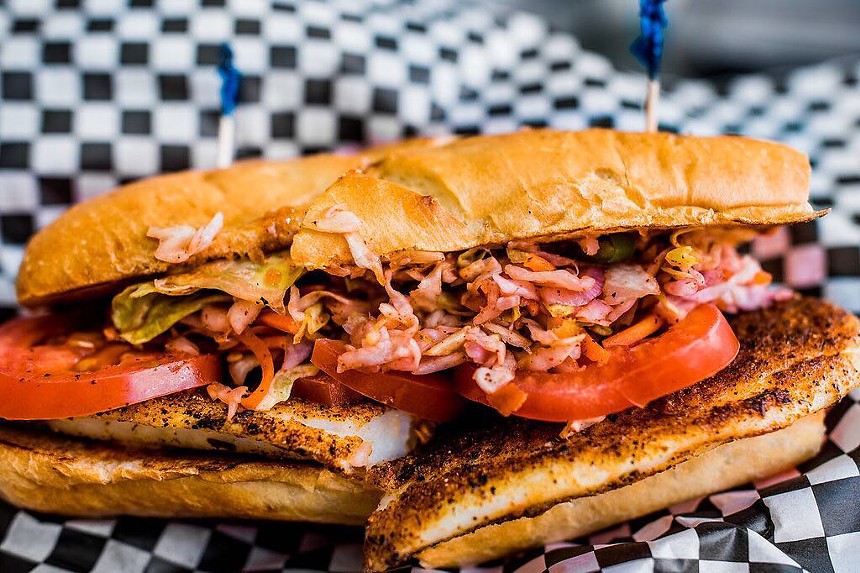 MartAnne’s is “The house that chilaquiles built.”
Discover Flagstaff
Chilaquiles at MartAnne’s Breakfast Palace
112 East Route 66, Flagstaff
928-773-4701
Family-owned Flagstaff favorite MartAnne’s is “The house that chilaquiles built.” It’s declared on the front door, on the art-adorned walls, and on the all-day breakfast menu. It’s not just an empty brag. The legendary plate is layered with scrambled eggs, cheese, onions, and either green tomatillo or red chile sauce, plus fried corn tortillas. Or step it up with J.B.’s Volcano which adds pork green chile and an over medium egg to the mountainous mix. Either way, you’ll sop up every gooey bite with this breakfast plate that lasts well past lunch. The Evil Jungle Princess at Dara Thai.
Allison Young
Evil Jungle Princess at Dara Thai
14 South San Francisco Street, Flagstaff
928-774-0047
Dara Thai has plenty of the usual suspects on its 100-plus item menu. You’ll cruise past papaya salad, spring rolls, and pad Thai until you hit the Evil Jungle Princess. With its ominous in name and description, the seemingly simple bowl includes chicken with coconut milk, lemongrass, and mushrooms. The deep and delicious broth is spiced with a secret Thai blend that’s sweet, sour, rich, and minty all at once. Other filling options include beef, pork, tofu, or broccoli, but paired with the perfectly cooked rice, your mouth is a sucker for the mystery.
KEEP PHOENIX NEW TIMES FREE... Since we started Phoenix New Times, it has been defined as the free, independent voice of Phoenix, and we'd like to keep it that way. With local media under siege, it's more important than ever for us to rally support behind funding our local journalism. You can help by participating in our "I Support" program, allowing us to keep offering readers access to our incisive coverage of local news, food and culture with no paywalls.
Make a one-time donation today for as little as $1.