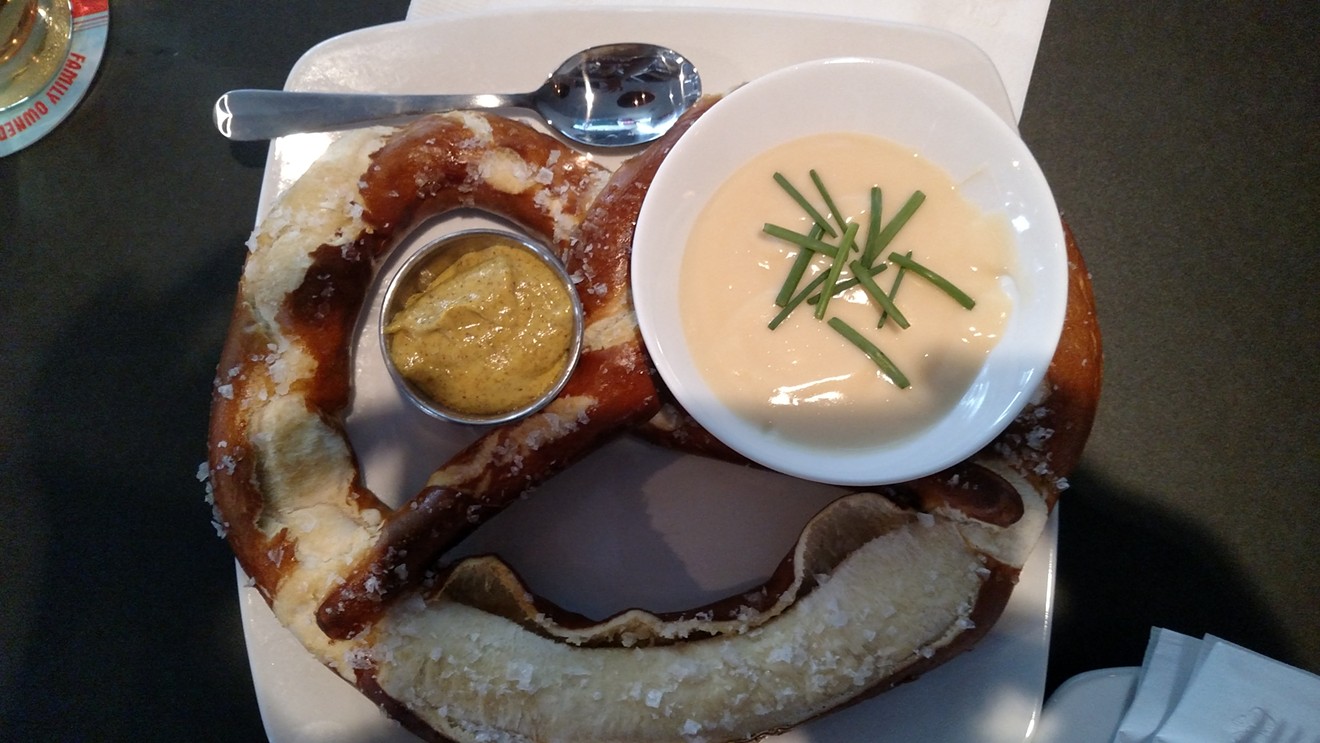 The Bavarian pretzel is a great option to enjoy alongside your beer sampler at Huss Brewing's Taproom in Uptown Plaza. Dave Clark
Better buckle up, because things are about to get Bavarian. Few menu items in the appetizer section excite more than the giant pretzel or the pretzel bites. Immediately, you’re thinking butter, salt, and delicious warm pretzel bread. Then you gasp — you almost forgot about the dipping sauce! Will it be gooey beer cheese, stinging mustard sauce, warm cream cheese, or some sort of fourth option?

Read on and find out. If you’re geared up for a giant pretzel, here are several spots across metro Phoenix where you can get one right now.

100 East Camelback Road, #160
Set in the back corner of Uptown Plaza, this Huss Brewing Company taproom has a packed menu of local beer, wine, and cider, plus a pretty decent selection of shareable food items. Topping the menu is the Rustic Giant Pretzel. You can tear off chunks of hot pretzel for dipping thanks to a side of spicy brown mustard. Or, for a little extra, you can dunk pieces into “magic” beer cheese queso. What’s so magical? You’ll have to see for yourself. The 14-ounce pretzel at Haus Murphy’s is served with Haus-made Horseradish mustard and butter.
Courtesy of Haus Murphy’s

5739 West Glendale Avenue, Glendale
It’s no surprise that Haus Murphy’s in downtown Glendale has a fantastic giant pretzel. Seen all over Food Network, Haus Murphy’s is an authentic German restaurant with Bavarian choices for days, including the well-known Original Oktoberfest Pretzel. It’s so well known it comes with the “limited availability” warning, but if you can get one, it’s good. The 10-ounce salted Oktoberfest pretzel itself is imported from Germany, and is served with butter and spicy mustard, or you can get a side of Haus Cheese Spread for a little extra.

3622 North Scottsdale Road, Scottsdale
This Scottsdale German-leaning joint is known for bringing the Bavarian vibe to Old Town. Once marked by the adorable Brat Haus Volkswagen mini bus, Brat Haus offers the Individual Pretzel for one to two diners, or the Giant Pretzel, for six to up to 10 people (or so they say). The pretzel itself is stone-baked and served with beer cheese fondue. Let’s just say it gives their popular Belgian fries a run for their money. 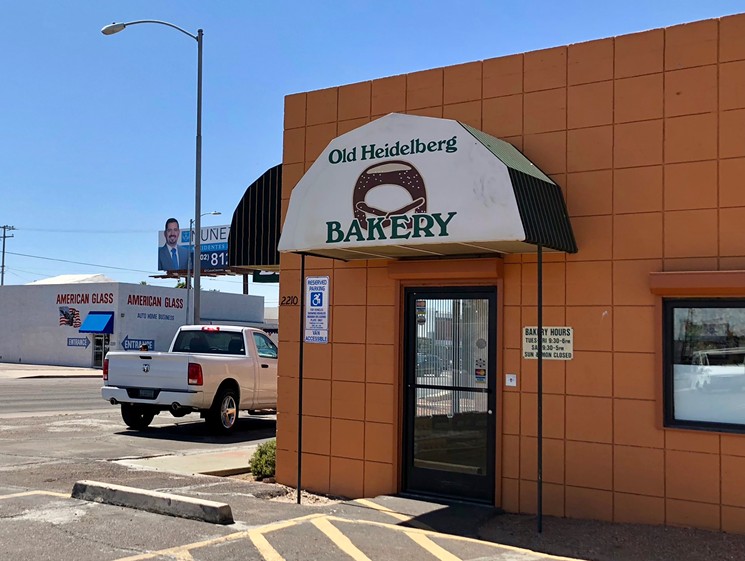 2210 East Indian School Road
This place actually has a pretzel on the large green sign staked on the north side of Indian School Road in Arcadia. The Old Heidelberg Bakery and European market has been around and family-owned since 1969, and bakes some of the most legit pretzels in town. Pretzels shapes offered are the traditional pretzel twist, plus the horseshoe and the bun. The Old Heidelberg Bakery doesn’t use sugar or additives, as “the recipe is from my grandfather and we’re sticking to it,” according to Emily from behind the counter. And if you miss the bakery hours, the pretzels are on the menu a couple of doors down at Helton Brewing Company.

4247 East Indian School Road, #102
If you’d like to see Arcadia from on high, the Attic Ale House is your place. And if you’d like to take down a delicious, appetizer-style pretzel, yes, the Attic is also your place. The baked pretzel here is plump, twisty, and fresh, dusted down with salt, and offered with both Dijon mustard and beer cheese. The beer list may bring you in, but the pretzel will have you coming back. 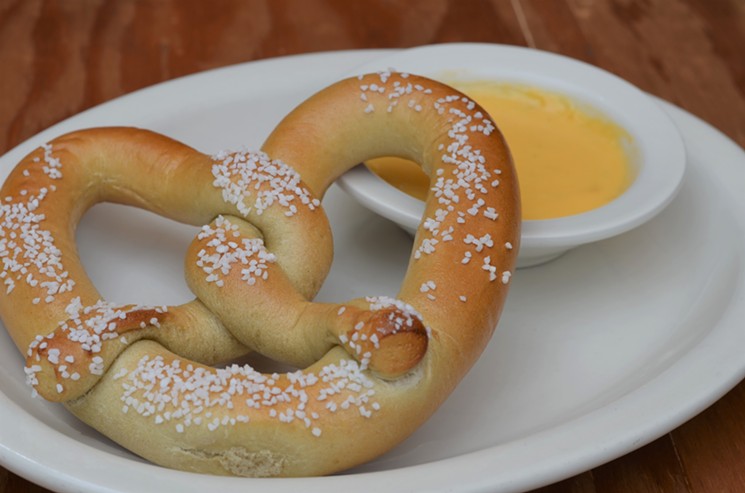 4338 West Bell Road, Glendale
You think pretzel, you probably think beer, and then you probably think bars. Therefore, pretzels make great bar food. And one bar that does it well is the 1993-established Padre Murphy's in Glendale. The soft and salted ballpark pretzel is served with a creamy pepper jack cheese dip. The bar also has a standard salted pretzel, served with spicy cheese sauce, for $4 during happy hour.

Multiple Locations
This downtown spot is known for three things – craft beer that can come from one of 31 taps, a breezy beer garden and patio section, and that food menu. We recommend the hot pretzel if you just want a snack. It’s a big golden brown pretzel with a dusting of chunk salt. And Angels Trumpet being the alehouse that it is, the place serve their hot pretzel with warm beer cheese made with non other than Four Peaks Sunbru Kolsch and spicy Dijon mustard. 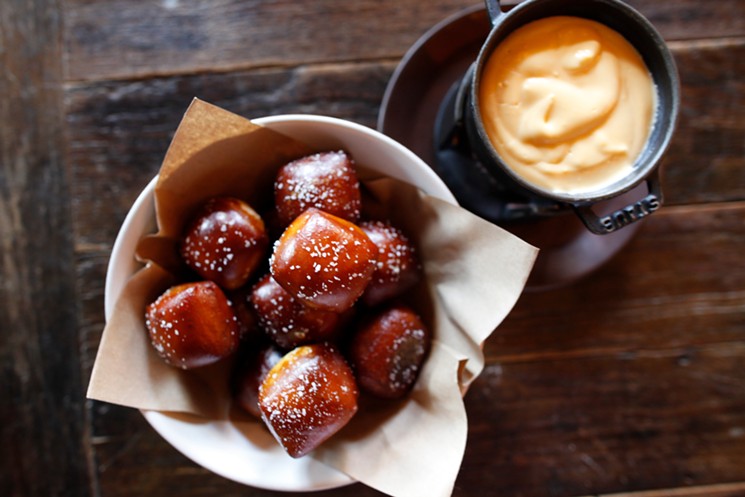 Multiple Locations
Everyone knows about the pretzel balls at Culinary Dropout. They're spherical, sprinkled with sea salt, served with hot and creamy cheese fondue, and quick to disappear. The pretzels and fondue are also on the happy hour menu, so you really can't feel bad for getting a second order.

This Scottsdale bar and eatery has a cult following, or so it would seem from talking to people around town. But Kelly's at SouthBridge also has a soft pretzel, served with warm made-in-house cheese fondue. Find it on the starters section of the menu. Pair it with a beer and a seat on the patio. 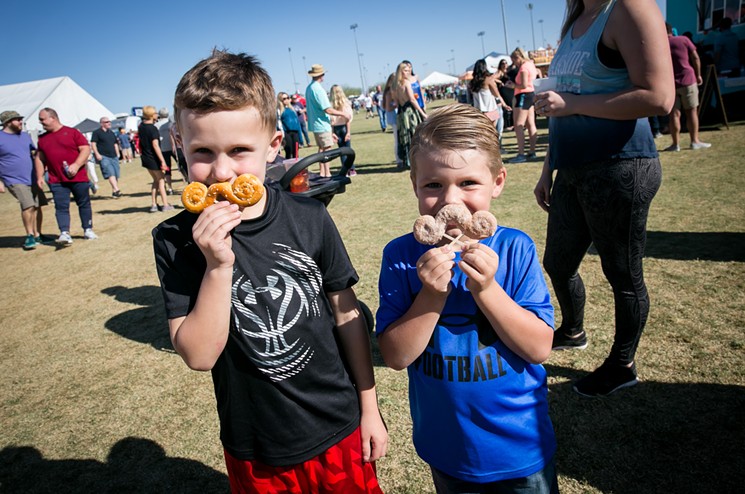 Mustache Pretzels' goodies are great for both the young, and the young at heart.
Melissa Fossum

Multiple Locations
Mustache Pretzels is a food truck and your just-off-the-plane snack — or something quick for you to grab before boarding. The fleet (two food trucks, a kiosk at the Phoenix Convention Center, and a spot at Sky Harbor's Terminal 3) features a tight menu of yes, mustache-shaped pretzels. There are flavored pretzels, bites, dogs, and dips (think green chile queso, honey mustard, and the irresistible cream cheese option).

Also known as Edelweiss at Wagon Yard, sort of, Edelweiss Biergarten is spotted by their super-conspicuous sign along Bell Road in the north Valley. This new, Old World restaurant specializes in Hungarian and German cuisine, pushing out dishes like knockwurst with potatoes, wienerschnitzel, and appetizers like Opa's Favorite – complete with wedges of German Gouda with house-made cranberry sauce. They've also got a giant pretzel with beer cheese sauce, and one of the largest selections of German beer in town.

Editor's note: This story was originally published on April 2, 2018. It was updated on July 14, 2020.
KEEP PHOENIX NEW TIMES FREE... Since we started Phoenix New Times, it has been defined as the free, independent voice of Phoenix, and we'd like to keep it that way. With local media under siege, it's more important than ever for us to rally support behind funding our local journalism. You can help by participating in our "I Support" program, allowing us to keep offering readers access to our incisive coverage of local news, food and culture with no paywalls.
Make a one-time donation today for as little as $1.