The candy store at Cerreta Candy Company in Glendale, which offers free factory tours during the week. Jacob Tyler Dunn
From local olive oil tastings to candy factory tours, bustling Latin American food courts to dinner and a show; There are all kinds of ways to experience the Arizona food scene around Metro Phoenix and beyond. But we consider the five on this list to be absolute essentials for any local or visiting foodie.

Enjoy Pizza and Wurlitzer Tunes at Organ Stop Pizza
Organ Stop Pizza has been a local institution in Mesa for more than 40 years, and it's no ordinary pizza parlor. It offers what might be the most surreal backdrop for an evening of feasting on pizza and beer: The airy, two-story restaurant is home to the largest Wurlitzer theater organ in the world. Every evening, one of the restaurant's resident organists performs from a vast songbook of popular hits and classic movie theme songs, to an enthusiastic crowd of families and assorted music lovers.

Take a Day Trip for Olive Oil Tasting at Queen Creek Olive Oil Mill
There are much worse ways to spend an afternoon than sampling the olive oils at the Queen Creek Olive Oil Mill, tasting the various blends like fine wine, or simply dunking hunks of crusty white bread into small plastic cups filled with the season's latest offerings. It's crowded on the weekends, sure, and depending on where you live, getting there may involve a 40-minute drive. But it's still much easier than flying to Tuscany. 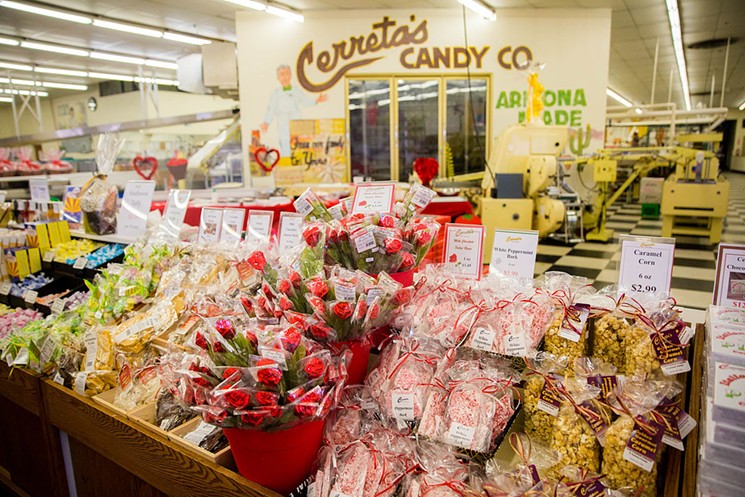 The candy store at Cerreta Candy Company in Glendale, which offers free factory tours during the week.
Jacob Tyler Dunn
Join the Cerreta Candy Co. Factory Tour and Candy Sampling in Downtown Glendale
From the moment you swing open one of those big double doors to this historic building in downtown Glendale, you know it's going to be a silly morning or afternoon – depending on whether you selected the 10 a.m. or 1 p.m. free tour of Cerreta Candy Co. The tour starts with an employee, probably Esther, giving you a Cerreta Candy Co. sea cap and a breakdown of the candy company's storied past over a microphone. A small crowd may or may not build up, depending on the time of year. You’ll hear about how Jim Cerreta Sr. founded the company on Halloween night 1968, and how he passed on the building and candy-making skills to his family, which now spans four generations. Have Dinner at Rustler's Rooste
Rustler's Rooste is the kind of place you take out-of-towners when they’re not the Scottsdale or hip, urban Phoenix type — or even if they are. It’s a cowboy restaurant with large sides, cooked-to-order steaks, and mason drinks. But there are several features unique to the Rooste, including live country music, a big shiny slide, and an incredible view of Phoenix from the restaurant's perch on South Mountain.