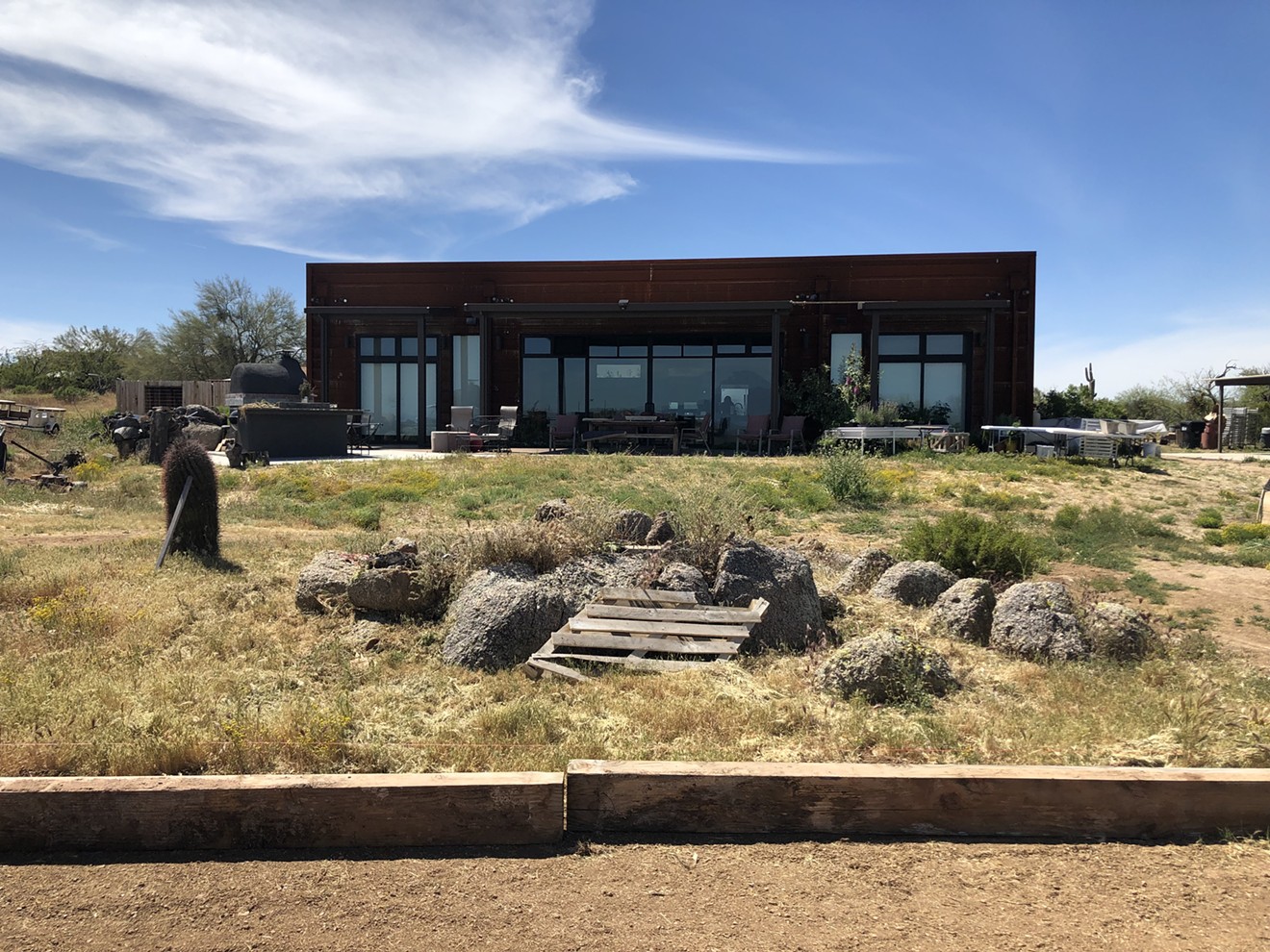 The Mountain Sky Farms "farmhouse." Chris Malloy
One of the best unheralded farms in greater Phoenix doesn’t have water. Instead of using the city grid, it harvests power from the sky. The owner of the five-acre farm works alone, seven days a week, often into the night. He built the two structures on his property. His produce is niche and top-notch. He only distributes within a short radius.

The owner of Mountain Sky Farms, John Naughton, drives about that radius — 20 miles — to haul water.

He plants seeds by the thousand, harvests almost every day, and supplies some of the best kitchens in the far north Valley.

Naughton farms open, hardscrabble land east of Troon in far North Scottsdale. Walking out from his rusted modern farmhouse, you see his grow house, greenhouse, and raised garden beds covered by tarps fidgeting and sailing in the wind. Even when that wind is a breeze, it seems to carry a primal force over the scrub of the parched earth. Past the beds, up a candled trail curling to the apex of a rock outcropping, there is a table for two. Naughton often eats here with his girlfriend when he can catch a break. Stark mountains — Black Mountain, the Mazatzals — march far in the distance. The sky is close.

Mountain Sky Farms is well named.
Chris Malloy
Naughton, who is 45, built his farmhouse five years ago. This growing season marks his third. His winding path has seen him work as a golfer, manager of Arizona Motorsports Park (which his family built), and real estate agent in San José del Cabo, Mexico. In Cabo, he visited a farm with guests, tables at the ends of rows, and a pizza oven. “That was my inspiration,” he says. “I could pick that up and drop it in Scottsdale.” Mountain Sky doesn’t have an eatery just yet. Instead, Naughton grows special plants for restaurants in Fountain Hills, Cave Creek, and far north Scottsdale.

“I’m really in tune with the plants and the soil moisture,” Naughton says. “I think some people get spoiled when they can just turn on valves and walk away.”

Most of his crops begin life in his grow house. Here, he seeds, planting some 6,000 a week. They germinate in irrigated metal shelves under fluorescent lights, some seeds embedded in dark cylinders of coconut husk and peat moss. Small fields of soil paved with microgreens traverse vertical racks: red lentil, clover, radish, arugula, red cabbage, kohlrabi, and more.

Once ready, some of these plants will be moved to a greenhouse, enveloped in a blocker that provides 40 percent shade. Under the glass and shade, seeds will continue to grow. Naughton utilizes deep-water culture, a growing method similar to aquaponics but without fish. “A plant sits on a raft and floats, and the roots hang down in the water,” he explains. “And the plant just takes up the nutrients in the water that it wants. It doesn’t go in there and drink, drink, drink. It probably uses 80 to 90 percent less water than traditional in-the-ground crops.”

In the open yard behind his house, the picture is different. Hoop-shaped tarps cover raised garden beds and, separately, edible flowers grow uncovered. The flowers are violas. A galaxy of them grow in tight clusters, the petals every vibrant hue you can imagine, more colors than a paint store. Naughton picks the petals every two days. “It’s called dead-heading,” he says. “When you pull all these flowers off, you’ll see the plant will want to flower to produce seed. Once it produces seeds, you’re tricking the plant into putting up more flowers.” 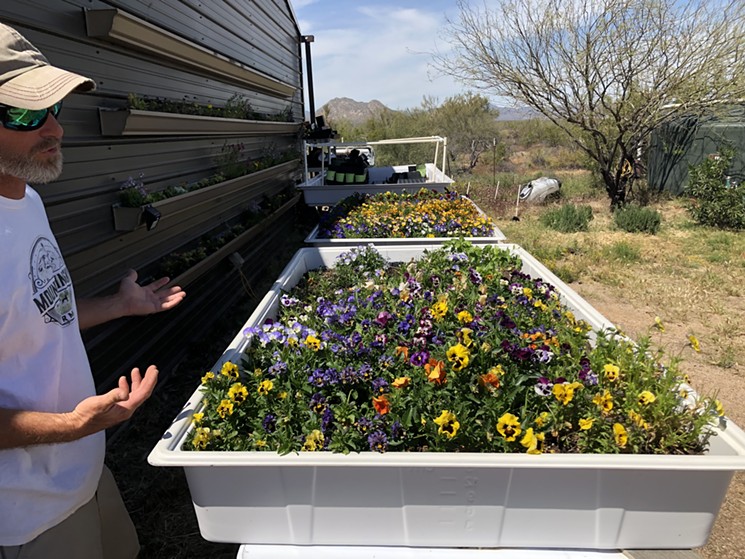 Edible violas about to get the "dead head" treatment.
Chris Malloy
Earlier this decade, when he set his heart on farming, Naughton started taking classes at University of Arizona. He also visited farms in greater Phoenix. His mind open, he culled unconventional techniques from what he learned. What sets him apart, too, is that he sources rare seeds, like Lamborn pea seeds (a “tendril-less pea tendril”).

Another separator is that Naughton grows for color as much as taste.

All this has given his farm cachet. All this has frustrated a chef or two. Naughton doesn’t do farmers markets. He doesn’t drive to faraway restaurants.

“I want to keep my food close to the farm,” he says. “DC Ranch is as far [south] as I want my food to go. I want to keep it close, and that pisses people off, but it’s not sustainable for me to leave the farm and drive 40 minutes, and drive back 40 minutes. Do you know how much I can get done in an hour and a half?”

And so he doesn’t sell to any chefs south of north Scottsdale, other than Tamara Stanger, who will drive out to make pickups. And so he delivers in reusable plastic bins to Arizona-minded northern restaurants like Tonto Bar & Grill and Cartwright’s Modern Cuisine, to private clubs like Trilogy and Scottsdale National. And so he sells to the private chefs of Midas-rich CEOs. “So it’s that,” he says of his time-born distance restrictions, “and also that I pull it out of the ground day of, and it’s getting to the chef that day.” 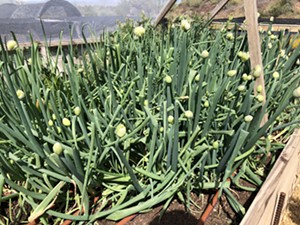 A rare Japanese onion varietal.
Chris Malloy
Naughton wants his product to be as fresh and vibrant as possible. That’s why he harvests just about every day. Walking up and down his rows of raised garden beds, he checks progress, plucks leaves, twists stalks, assesses bug damage, assays colors, and names outlandish plants.

“These [herb] plants will be here for several years,” he says. “I’ll continue to water them in the summertime.”

In February, he recalls, “I had 11 inches of snow. I lost almost half the farm.”

Sorrel webbed with red veins like the cracks of an ancient vase.

“The chefs I sell to,” he says, smiling, avoiding credit, “their plates are like artwork.”
KEEP PHOENIX NEW TIMES FREE... Since we started Phoenix New Times, it has been defined as the free, independent voice of Phoenix, and we'd like to keep it that way. With local media under siege, it's more important than ever for us to rally support behind funding our local journalism. You can help by participating in our "I Support" program, allowing us to keep offering readers access to our incisive coverage of local news, food and culture with no paywalls.
Make a one-time donation today for as little as $1.
Chris Malloy, former food editor and current food critic at Phoenix New Times, has written for various local and national outlets. He has scrubbed pots in a restaurant kitchen, earned graduate credit for a class about cheese, harvested garlic in Le Marche, and rolled pastas like cappellacci stuffed with chicken liver. He writes reviews but also narrative stories on the food world's margins.
Contact: Chris Malloy
Follow:
Twitter: @yollamsirhc
Instagram: @malloy_chris/