Mardi Gras 2019: What 11 Phoenix Restaurants Are Doing for Fat Tuesday

Snack on King Cake, a Fat Tuesday favorite made with cinnamon brioche and glazed with icing and colorful sprinkles. Courtesy of Southern Rail
Even if you don't observe it, you've probably heard of Fat Tuesday — also known as the start of Mardi Gras. It's part of the festive season before Ash Wednesday and the beginning of Lent and is celebrated around the world. Of course, Fat Tuesday has taken on a life of its own in New Orleans.

However, there's no need to travel to the Big Easy, because the big Valley's got you covered. Check out our list of the best drink and food deals and celebrations surrounding March 5. From daiquiris to crawfish by the pound, it's all sure to put you in a partying mood.

Angry Crab Shack
2740 South Alma School Road, Mesa
The brand's east Mesa location is hosting a Fat Tuesday "party for a purpose" with all proceeds going to the Heart Strings Foundation, an organization providing guitars to veterans and actively serving military members and their families. The celebration goes from 4 to 11 p.m. and features a celebrity dunk tank, 50/50 raffle, and live music.

Try the dirty rice at Baby Kay's Cajun Kitchen.
Lauren Cusimano
Baby Kay's Cajun Kitchen
2051 South Dobson Road, #18, Mesa
Hang out at Baby Kay's for the ultimate Fat Tuesday experience. Happy hour drinks are available all day long with happy hour food deals going from 2 to 6 p.m. There's also a crawfish and shrimp bowl starting at 5 p.m. along with the classic Mardi Gras sweet treat, king cake. Look out for fun giveaways and live music from noon until the end of the party. The restaurant is not taking reservations that day.

A cup of filé okra gumbo at Creole Cajun Bistro.
Lauren Cusimano
Creole Cajun Bistro
5070 South Gilbert Road, #400, Chandler
Head out to the Chandler eatery for their fourth annual parking lot party. From 3 to 10 p.m., enjoy live music, a crawfish boil, giveaways, and get your hands on some Mardi Gras beads and masks while supplies last. Chef Eric Rachal will be serving authentic Creole and Cajun dishes, and drinks will be flowing. There are no reservations for the event, so get there early to participate in all the fun.

Fat Tuesday is offering all-day celebrations with drink deals and New Orleans-style grub.
Fat Tuesday Tempe/Facebook
Fat Tuesday
Multiple Locations
Aptly named after the holiday, the restaurant chain even has a countdown to Mardi Gras on their website. At the Tempe location on Mill Avenue, party from 11 a.m. to 2 a.m. and enjoy traditional NOLA grub like gumbo, jambalaya, and po'boys. Don't forget the New Orleans daiquiri and hurricane drink special. There's also face-painting, two dance floors, a balloon artist, live music, DJs, and a bead throw every hour. The Fat Tuesday in Glendale at Westgate Entertainment District is hosting a similar celebration, with the addition of a caricaturist and burlesque dancers.

Hang your boots up at Harold's before entering the crawfish-eating contest.
Sara Weber
Harold's Cave Creek Corral
6895 East Cave Creek Road, Cave Creek
The long-time Valley restaurant hosts an epic Mardi Gras party every year featuring with live jazz, dance lessons, and the Acoustic Kings at 8:30 p.m. That's also when the crawfish-eating contest starts, and don't forget about the $18.99 authentic Mardi Gras buffet filled with dishes like oysters, jambalaya, chicken gumbo, and more. Show off your best costume, body paint, and mask and see who gets the most beads. Call 480-488-1906 for reservations.

Hot N' Juicy Crawfish in Tempe lives up to the name.
Meagan Mastriani
Hot N' Juicy
Multiple Locations
Step up to the plate (literally) and enter the crawfish-eating contest at both Valley locations (Tempe and Glendale) during Hot N' Juicy's annual Mardi Gras celebration. Prizes include gift cards for $50, $100, and $200 that can go toward your next visit. Thirsty participants and patrons can also enjoy a hurricane or beer as part of a two-drink dine-in special.

Sean's Rum Runner is available for $5 all day long on Fat Tuesday.
Courtesy of NPX
NPX
4717 East Bell Road
This neighborhood hangout is serving up its famous Sean's Rum Runner for $5 all day long. It's a tasty concoction of Bacardi, Rumchata, Meyers Dark Rum, pineapple and orange juice, and a splash of grenadine. A New Orleans-style bread pudding made from scratch is perfect for dessert and also $5.

Sandbar has some great drink deals for Fat Tuesday including $5 hurricanes.
Courtesy of Sandbar Mexican Grill
Sandbar
Multiple Locations
From March 1 to 5, chow down on crawfish, shrimp tacos, and jambalaya while sipping on $5 hurricanes and downing $1 Jell-O shots. The Mexican grill recently opened its third location in Gilbert at the SanTan Village Shopping Center — just in time for Mardi Gras. 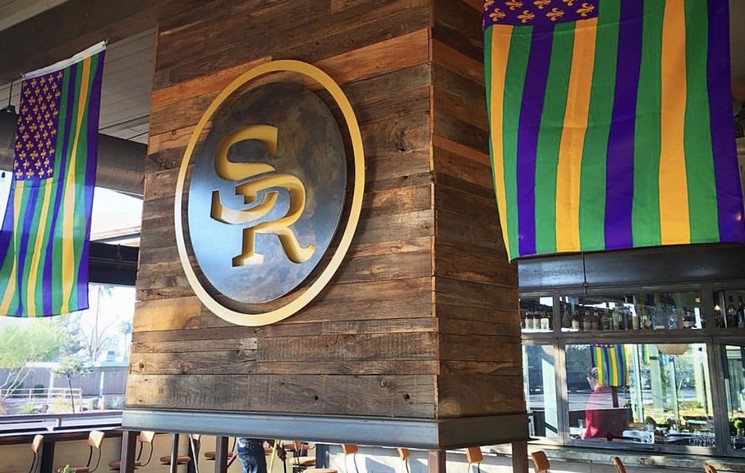 Order off the regular menu or enjoy New Orleans-style specials like gumbo and blackened catfish.
West Alley BBQ & Smokehouse/Facebook
West Alley BBQ & Smokehouse
111 West Boston Street, Chandler
The Tennessee-style barbecue joint is partnering with chef Jude Mouton for their Mardi Gras celebrations. Mouton grew up in New Orleans and specializes in southern-style, Louisiana-inspired food. He's also cooked for big names like Beyoncé and Jay-Z, Jennifer Lopez, and Prince. Mouton's created an authentic New Orleans-style lunch and dinner menu especially for Fat Tuesday, with items like maple-smoked, bacon-wrapped shrimp, blackened catfish topped with a Louisiana shrimp etouffee sauce, red beans with smoked sausage and rice, and New Orleans bananas Fosters. Guests can also order off the regular menu. Reservations are encouraged.
KEEP PHOENIX NEW TIMES FREE... Since we started Phoenix New Times, it has been defined as the free, independent voice of Phoenix, and we'd like to keep it that way. With local media under siege, it's more important than ever for us to rally support behind funding our local journalism. You can help by participating in our "I Support" program, allowing us to keep offering readers access to our incisive coverage of local news, food and culture with no paywalls.
Make a one-time donation today for as little as $1.